Smoke of Corruption: The Grand Scheme to Allocate the Tobacco Market

Recently publicized secret audio recordings suggest that Georgia is afflicted by high-level corruption. The leaked tapes call into question the behavior of key tobacco industry players and implicate high-level government officials. While the authenticity of these tapes is yet to be verified, the evidence and the circumstances point to a likely corruption scheme. High-level government officials and the ruling Georgian Dream party appear to have benefited from the arrangement. What is more, the representatives of the judiciary have also allegedly played a part. 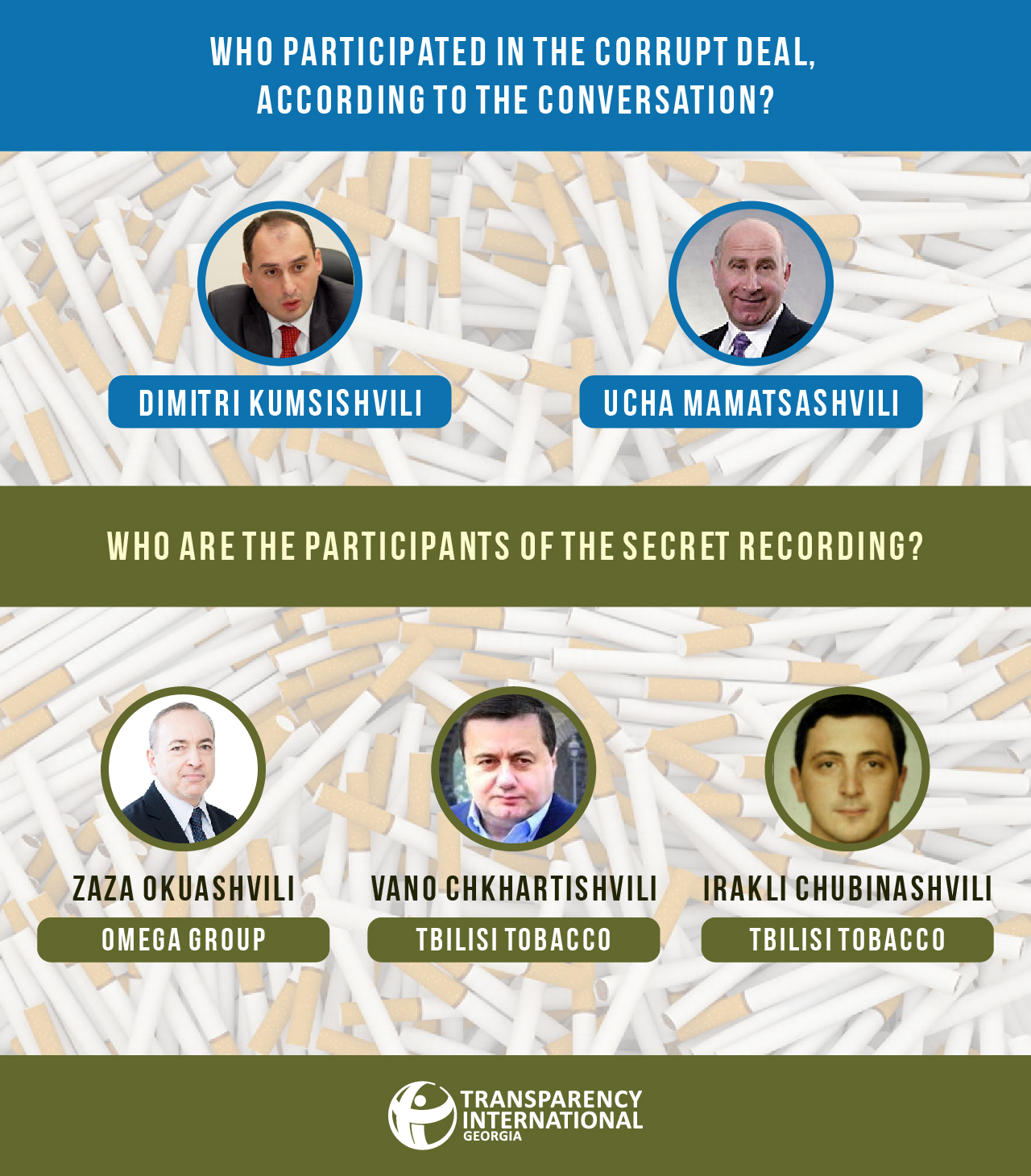 What the Conversations Were About

In recent weeks, several leaked audio recordings featuring Omega Group have emerged. The last two leaks have to deal with the allocation of the tobacco market. In the tape released on September 17, the participants of the conversation appear to be Zaza Okuashvili, founder of Omega Group and Irakli Chubinishvili and Vano Chkhartishvili, who speak on behalf of Tbilisi Tobacco. In this leaked tape, they are recorded to deliberate over a scheme for dividing the Georgian tobacco market. According to the conversation, the following individuals are apparently aware and involved in the process of striking this deal: 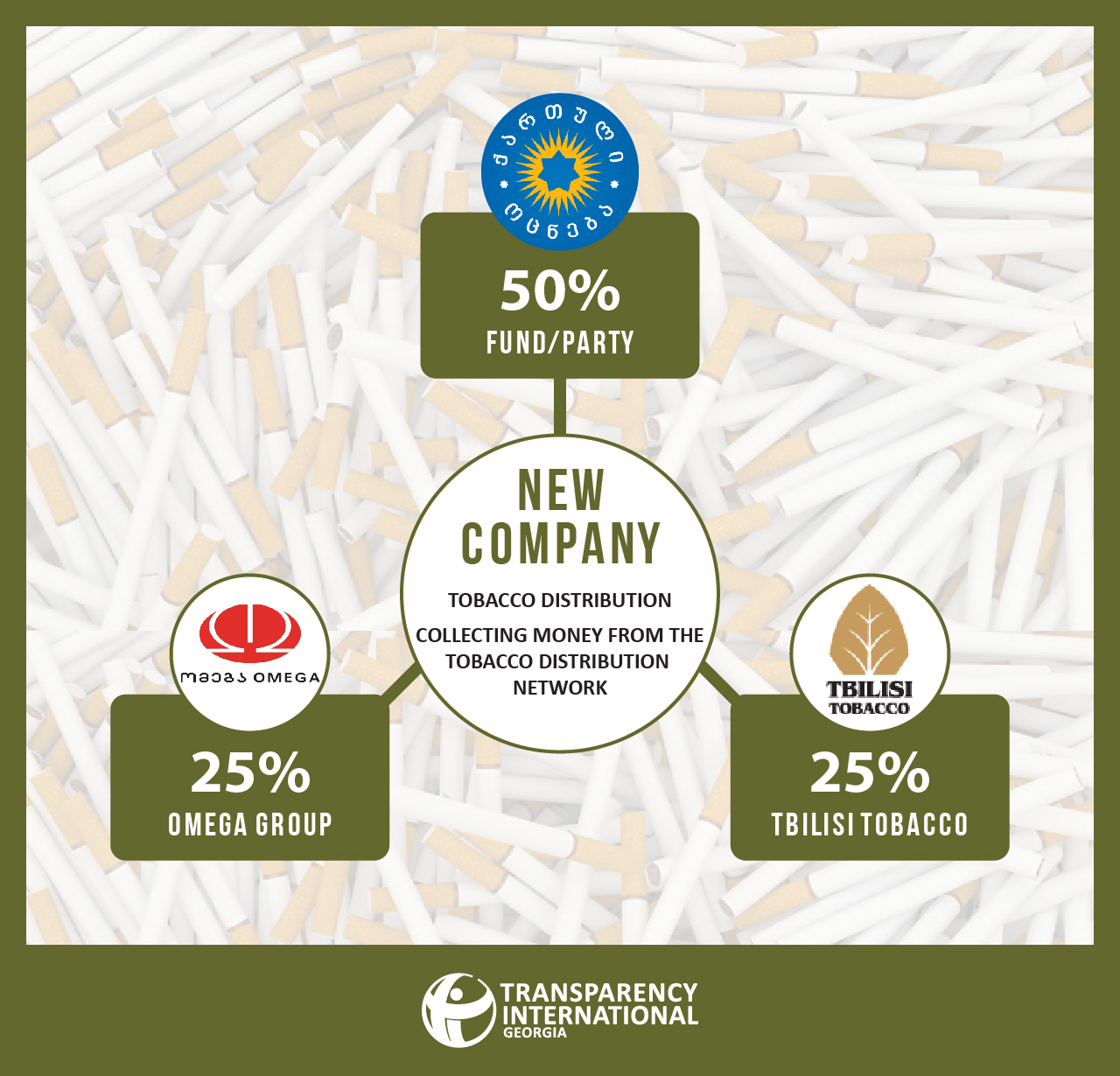 On September 24, another secretly recorded conversation was leaked to the media, which records Irakli Chubinishvili (Tbilisi Tobacco) discuss the apparently illegal funding scheme of “the party” with Zaza Okuashvili (Omega Group). According to the recording, foreign tobacco companies also donated to “the party”, and Tbilisi Tobacco made three contributions to “the party” in the pre-election period. Irakli Chubinishvili suggests that Omega Group follows suit and finance “the party” rather than try to sort it out with the government. According to the conversation, the sham fund for “the party” was orchestrated “the minister”, presumably, Dimitri Kumsishvili.

A certain legal dispute is the subject of another recorded conversation. They are likely referring to Omega Group’s and Tbilisi Tobacco’s lawsuits against tobacco importer companies.

“They have created us a price markup by saying that filtered cigarettes should stop dumping [...] These that have been halted by the court, and so that others don’t import, they should be told not to let that happen and to halt them too.”

Individuals participating in the conversation are most likely referring to the two lawsuits adjudicated by the first instance court. In their rulings, the judges instructed Philip Morris and British American Tobacco, multinational tobacco companies, to pay GEL 93 million and 270 million to Tbilisi Tobacco and Omega Group, respectively, in fines for inflicted damages.

The feud between tobacco industry players first came to light in January 2016, when Philip Morris decided to fire Omega Group and hire a different company to distribute its goods. This decision was followed by interruptions in distribution, increased prices and a lawsuit initiated by Omega Group. The lawsuit concluded with a settlement between the disputing parties in April 2016.

According to Transparency International Georgia’s confidential source, this event marks the beginning of Dimitri Kumsishvili’s apparent illegal involvement with the case, as he reportedly insisted that Philip Morris continued to do business with Omega Group.

In February 2016, Philip Morris was sued again – this time by Tbilisi Tobacco, who argued that the importer was selling its goods at a price lower than production cost. In March 2017, after the dispute was concluded, Transparency International Georgia examined the court ruling and found that Tbilisi City Court had failed to provide sufficient reasoning in support of its decision to side with Tbilisi Tobacco, raising suspicions about possible corruption. The Court ruling was problematic for several reasons, including:

From another leak published on September 21, we learned that Omega Group was meant to gift expensive cars to Dimitri Kumsishvili and Nodar Khaduri, who was appointed as Minister of Finance in 2012 and as Head of Competition Agency in 2016. It was under Khaduri’s chairmanship that the Competition Agency published and deleted from the website its assessment, which found no violation of competition legislation and which Philip Morris had presented during their dispute with Omega Group in court.

Following public outcry, including from international community, Tbilisi Appellate Court made a complete turnaround and annulled the fine of GEL 93 million imposed on Philip Morris. Tbilisi Tobacco took the case to the Supreme Court but decided to withdraw the request, even though GEL 8 000 in administrative fees had already been paid.

What the Recordings Tell Us

The publicly available evidence points to secret deals between tobacco industry players, representatives of various government institutions and influential individuals affiliated with leaders of the ruling party. Government officials allegedly abused their power in order to put the said companies in a dominant position on the market. Generated revenues were allocated between companies and the group affiliated with the ruling party.

These leaked audio recordings further strengthen Transparency International Georgia’s hypothesis on influence peddling in the case of Philip Morris and Tbilisi Tobacco. Recordings suggest that, in this corrupt scheme, the judiciary was yet another instrument in the hands of influential individuals. In fact, Transparency International Georgia recently studied corruption risks in Georgia’s judiciary. We found that corruption in the judiciary is enabled by undue influence by a group of dominant judges and insufficient anti-corruption and integrity safeguards.

Should these leaked recordings prove to be authentic and the above-listed allegations to be true, major corruption crime involving high-level government officials and representatives of various state bodies. This is an important test: How government reacts to the emerged evidence and pursues the investigation will demonstrate the extent to which the Georgian government has the political will to tackle high-level corruption. 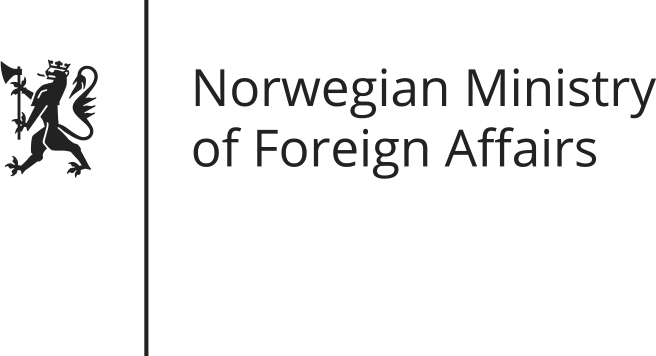