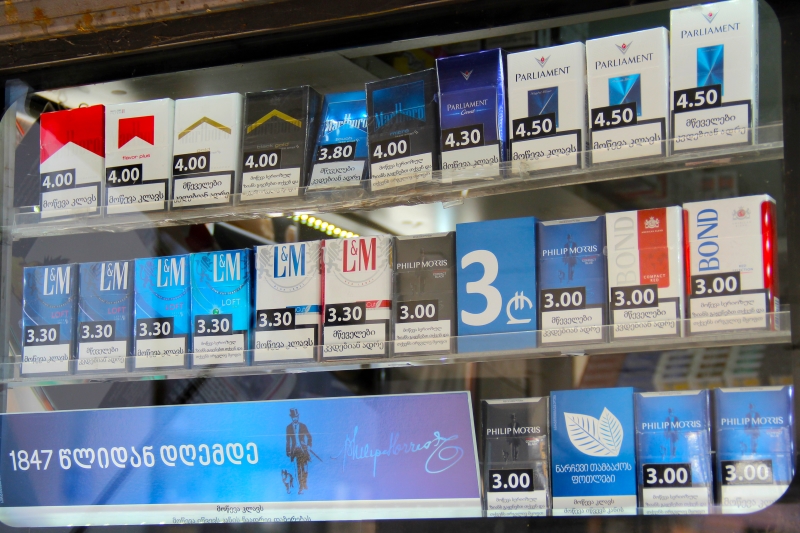 Transparency International Georgia comments on the Decision of Tbilisi City Court, dated 10 February 2017, based on which Philip Morris was instructed to pay up to GEL 93 million in favour of JSC Tbilisi Tobacco.

Subject of the Dispute:

Pursuant to the statement of JSC Tbilisi Tobacco, from 1 September 2013, Philip Morris Georgia LLC started realizing BOND STREET cigarettes at a price below cost price as a result of which the sales of JSC Tbilisi Tobacco decreased significantly and the company sustained material damages.

Pursuant to the position of Philip Morris Georgia LLC, the retail sale prices of their brand cigarettes were higher than those of the cigarettes produced by JSC Tbilisi Tobacco in the majority of cases in the disputed period, while the decrease of sales, in their opinion, is associated with management, marketing problems, product quality and other factors.

Summary of the Court Decision and Existing Problems:

Based on the evaluation of Tbilisi City Court, Philip Morris set dumping prices in order to drive its competitors out of the market. As a result, JSC Tbilisi Tobacco sustained material damages.

It should be noted that despite the volume of the sum requested by the claimant and complexity of the dispute, the proceedings were held in an expedited manner and with possible procedural violations, while the court decision was issued without proper justification. The following circumstances raise doubts in relation to the proceedings being held in a biased manner and in violation of the right to a fair trial:

The Court did not attach to case files, and did not take into account in its decision, the Report of the Competition Agency presented by Philip Morris according to which the violation of the Law on Competition was not established on the tobacco market. Pursuant to the Report on the Market of Filter and Non-Filter Cigarettes, dated 2016, which entails a forty-month monitoring period "upon the detailed analysis of companies, the tendency of realizing products at and/or below cost price was identified in case of a number of economic agents. This fact does not, in substance, contradict the applicable laws since there is no legal norm which legally governs such a fact.”

Overall, based on the evaluation of the Competition Agency, the environment on the market of filter and non-filter cigarettes is competitive, there is competition among producing/importing companies, and the market is developing further. Moreover, no terms restricting competition and artificial barriers were identified. Therefore, based on the Report of the main body for regulating state policy in the sphere of competition, the environment on tobacco market in the disputed period was evaluated as competitive.

It is important to note that the said Report was initially published on the webpage of the Agency. However, it was later deleted for completely unclear reasons.

Moreover, the Court established the violation of law due to dumping pricing when there is no law regulating dumping in Georgia. It is interesting that the Government of Georgia was working on an anti-dumping draft law in November 2015. However, the said governmental initiative remained unimplemented. Therefore, as of today, there is no law in Georgia regulating dumping. Moreover, based on the explanation of Philip Morris, it sold tobacco below cost price to its distributors, while in case of retail sales, the price for consumers was not below cost price. Even more, the retail value of Philip Morris' tobacco was always higher than the value of products produced by JSC Tbilisi Tobacco. Therefore, the Court should have justified why it considered the said actions as dumping pricing and in breach of law.

Furthermore, the Report of the Competition Agency indicates that the tendency of realizing products at dumping prices was identified upon the inspection of several economic agents. Thus, it is completely unclear based on what circumstances and facts the Court established that the decrease in the sales and, ultimately, profit of JSC Tbilisi Tobacco was only and directly linked to the actions of Philip Morris.

Even though the case material was voluminous and the dispute was by nature legally complex, the Court expedited the proceedings, heard the case on the merits in one hearing and issued the decision at the same hearing.

Moreover, the lack of justification of the court decision was significantly conditioned by the inadmissibility of the Report of the Competition Agency. Based on the statement of Philip Morris, they presented the Report during the hearing on the merits, only after it was prepared. However, the Court did not attach it to case files.

Overall, even if Philip Morris had violated the laws of Georgia, based on the Decision of 10 February, the Court granted JSC Tbilisi Tobacco much more than the actual possible amount of damages. The imposition of up to GEL 43 million on Philip Morris as compensation for possible damages over next 10 years, and the instruction to further pay GEL 15 million based on the norms related to unjust enrichment, are particularly deprived of justification. In total, the sum imposed by the Court amounted to over GEL 90 million when, based on the circumstances of the case, the damages actually inflicted on JSC Tbilisi Tobacco could have been GEL 8,571,954 and the annual 10% of GEL 8,571,954, i.e. profit and lost income.

It is also important that the reimbursement of the above amount was jointly imposed on both the Georgian company - Philip Morris Georgia LLC, and its founder and sole shareholder - Philip Morris S.A. The Court itself indicates in its Decision that, as a rule, the partner of a limited liability company does not incur liability for the responsibilities of the company, apart from the exceptions. The said exception was not property justified by the Court in its Decision.

Who examined the case of Philip Morris?

The present case was examined by the judge of the Civil Panel of Tbilisi City Court, Vladimer Kakabadze, who was appointed in 2016 by the decision of the High Council of Justice with the probation period of 3 years. It is interesting that on a similar case, Vladimer Kakabadze also imposed a penalty in the amount of up to GEL 270 million on the international tobacco producing company, British American Tobacco, in favour of the local tobacco producing company - Omega. Moreover, according to widespread information, the same judge is also examining the case of Tera Bank.

Who is Philip Morris?

Philip Morris Georgia LLC is a subsidiary of Philip Morris International (PMI), an international tobacco company which is well-reputed worldwide. Its portfolio include such brands as MARLBORO, PARLIAMENT, L&M, CHESTERFIELD and BOND STREET. PMI has been present in Georgia since 1996. PM Georgia LLC has offices in Tbilisi and Batumi and serves as a hub for Caucasus & Moldova. The company provides hundreds of jobs, directly and indirectly through the distribution and sales of its products. PM Georgia LLC is one of the largest taxpayers to the state budget. Over the last 10 years, GEL 900 million was paid to the state budget as a result of the sales of the products of Philip Morris.

Who is Tbilisi Tobacco?

Joint stock company Tbilisi Tobacco is one of the largest local tobacco producers on the Georgian market since 1998. The famous brand of the company, PIRVELI, is among the top three cigarette brands with the largest volume of sales throughout the country. It should also be noted that JSC Tbilisi Tobacco is a company associated with the businessman Vano Chkhartishvili whose name is linked to a number of publicly-known court disputes.

Based on all the above, the court decision being insufficiently justified, as well as the proceedings being held in an expedited manner and with possible procedural violations, raises legitimate questions in relation to the objective examination of the case and reaffirms doubts in relation to the partiality of the Court. Due to the complexity and specifics of the dispute, it is of significant importance for the Court to justify its Decision to a sufficient degree - especially, when the party to dispute is one of the largest producers and importers on the international tobacco market. The issuance by the Court of an unjustified decision expressly damages the investment environment and image of the country which ultimately damages the state budget and economy. We hope that the examination of the case by higher courts will eliminate the doubts raised by Tbilisi City Court.