Five public tenders of Tbilservice Group LLC contain alleged signs of corruption. Only one tender out of the mentioned five was competitive. The absence of competition and the tender requirements cast doubt on possible tailoring of tender specifications to the needs of particular suppliers.

IDO SRL, an Italian company, won four tenders valued at GEL 3.3 million without competition. Probably this happened due to the required samples, which were similar to the products of this company, unreasonably stringent qualification requirements and short bidding periods. In 2018, the same company won a public tender of GEL 2.1 million without competition too, and in 2017, it got a simplified procurement contract of € 620,000 again from Tbilisi City Hall.

Another public tender of Tbilservice Group also casts some doubts on possible tailoring of tender requirements to a specific company. In this case, Ben 3 LLC won the tender. Ben 3 is a company, which was registered 11 days before the tender was announced. Without any experience in entrepreneurial activities, the company could win the tender of GEL 477,000.

The amount of money spent on New Year’s celebration also is a problem. In a city where there are severe social and urban problems, we believe, spending of GEL 6.6 million on such events is not reasonable. 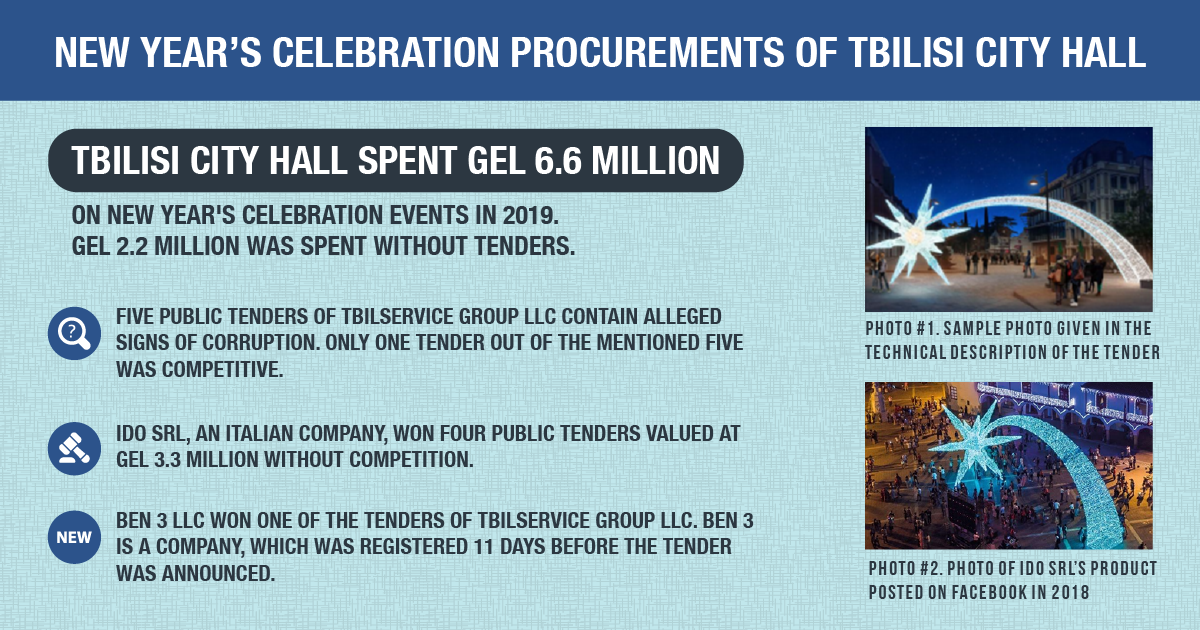 In the framework of monitoring budget expenditures and public procurement, Transparency International Georgia has studied the budget expenses of Tbilisi City Hall on New Year’s and Christmas celebration events.

In Georgia, a high share of simplified (direct) procurement characterizes public procurements related to New Year’s events. Emergency or an event of state and public importance are usually named as grounds for direct procurement. Although the New Year is always on January 1, municipalities are unable to start preparations for New Year's events on time and refrain from spending budgetary funds in hurried and drastic end-of-year purchases. Together with the lost opportunity to save, direct procurements raise suspicions of corruption. Last year, Transparency International Georgia published a similar study on New Year's celebration expenses.

Tbilisi City Hall has spent more than GEL 2 million through simplified procurement, which is 77% of its overall New Year's celebration expenses. Tbilservice Group spent GEL 180,000 through simplified procurement (5% of its overall expenses). Both agencies jointly spent 36% of their New Year’s celebration budgets without tenders.

We requested information from the mentioned agencies about New Year’s celebration events, including tenders and simplified public procurement announcement numbers, but the City Hall gave us only the total number of the expenses made through tenders and direct purchases. As for Tbilservice Group, one tender valued at GEL 455,000 (NAT190018326) was missed from the provided information.

Tbilservice Group spent 95% of its New Year’s celebration budget (GEL 3.9 million) through tenders. However, only one company won four tenders of GEL 3.3 million without competition. This was an Italian company IDO SRL, from which the City Hall purchased illumination equipment of GEL 2.2 million and a Christmas tree of GEL 1.1 million. It is noteworthy that in 2018, Tbilisi City Hall also bought the New Year’s illumination equipment from IDO SRL. That time the company won a tender of GEL 2.1 million also without competition. Moreover, in 2017, Tbilservice Group signed a € 620,000 simplified public procurement contract for the purchase of New Year's illumination equipment with IDO SRL too. During the last 3 years, IDO SRL has received approximately GEL 7.3 million from Tbilisi City Hall.

The four tenders won by IDO SRL in 2019 cast doubt on the fact that Tbilservice Group has tailored the tenders to the company’s needs. Several suspicious circumstances were identified in this tenders: 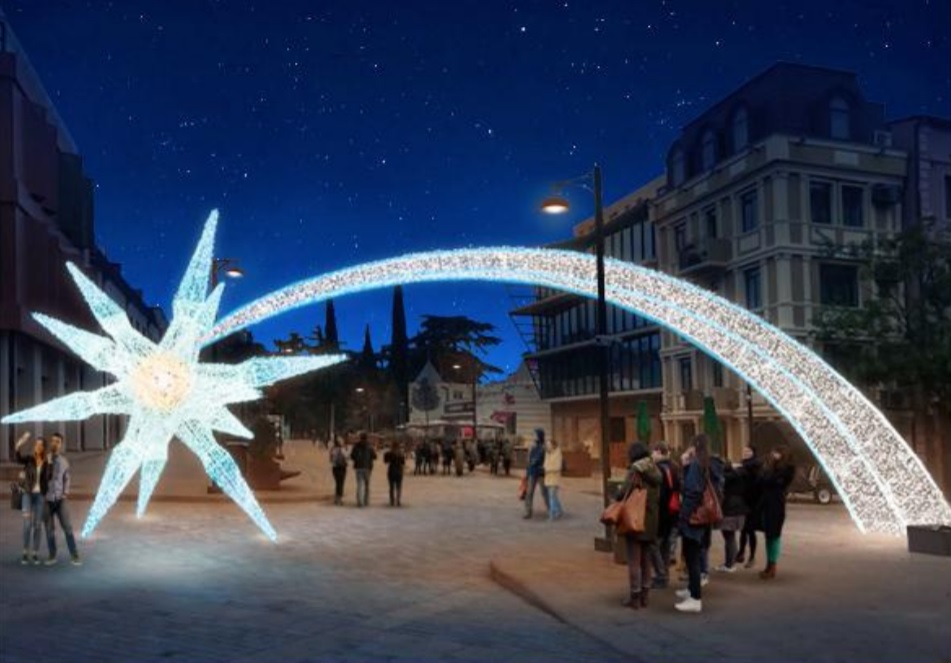 Photo #1. Sample photo given in the technical description of the tender 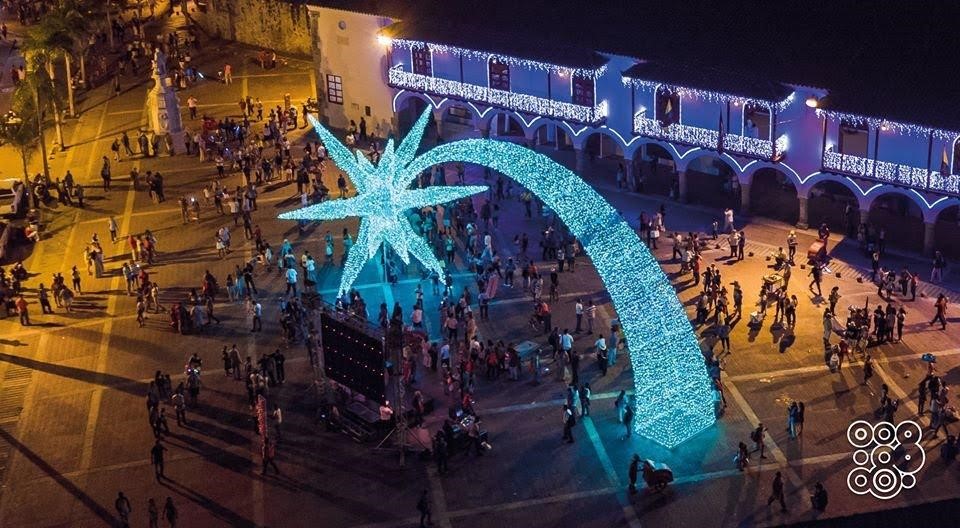 Overall, the samples allegedly tailored to IDO SRL products, unreasonably strict qualification requirements and short bidding periods resulted in the fact that, like in the past 2 years, only IDO SRL participated in all four tenders and won them without competition. In three tenders, the company bid the exact price that was the estimated cost of the purchase, thus no savings were made. The only case where the company offered GEL 11,000 less price (GEL 1,089,000) than the initial price, was the tender announced for a Christmas tree purchase. Therefore, only GEL 11,000 was saved in the tenders of GEL 3.3 million.

Tenders allegedly tailored to the needs of Ben 3 LLC

The fifth New Years’ celebration tender of Tbilservice Group also raised questions regarding the tailoring of tender requirements to Ben 3 LLC, which ultimately won the tender.

Ben 3 LLC was established on October 11, 2019. Tbilservice Group announced the tender of GEL 477,000 (NAT190020197) for the purchase of illumination equipment and light bulbs on October 22. Tbilservice Group did not set minimum experience requirements for bidders and as a result, Ben 3, a company established 11 days before, was allowed to participate in such a large tender. This was a strange decision made by Tbilservice Group, especially in light of the tenders won by IDO SRL, where bidders were required to have experience of supplying similar products of GEL 3 million for the last 4 years.

Together with Ben 3, two other companies participated in this tender. Nebi LLC bid the lowest price but it was disqualified due to alleged flaws in technical documentation. According to the minutes of the Tbilservice Group’s Tender Commission meeting, Nebi did not provide information about the exact model. Ben 3 offered the next lowest price – GEL 472,980 and it won the tender. This was the first public tender won by Ben 3 LLC while it had no prior experience in delivering goods or services.