Last week the attention of the public was drawn to the statements made by representatives of LTD Citroën Georgia, including Giorgi Gachechiladze (also known as “Utsnobi”), concerning the irregularities in state tenders for motor vehicle procurement. At the same time, these statements criticized the Georgian Prime Minister. The company representatives have also filed a complaint with the Competition Agency.

Transparency International Georgia studied the tenders, (the largest players and the level of competition) held in this sector between 2015 and the first half of 2017. As demonstrated by the information presented below, the level of competition in this sector is quite low, and there are several large players on the market. However, based solely on this information, it is hard to say that cartel deals are being made on the market since the companies which have become the subject of this grievance have quite an extensive experience operating in this sector and, given a small size of the Georgian market, their winning of tender can be considered logical. Moreover, several tenders won by Citroën Georgia in the past raise certain questions.

On the other hand, low level of competition in the sphere of state procurement is one of the significant challenges regularly emphasized by Transparency International Georgia. In the near future, our organization will publish a report on state procurement for 2015-2017 underscoring the need for increased competition and highlighting other problematic trends in this sphere.

1. What is Claimed by Citroën Georgia

The lawyer of Citroën Georgia, its director and Giorgi Gachechiladze who is linked to the company believe that the company failed to win the state tender due to a corrupt deal. Specifically, they claim that there is a cartel agreement on the motor vehicle market and, as a result, only a few companies are winning state tenders. Giorgi Gachechiladze notified Georgian Prime Minister Giorgi Kvirikashvili about this, asking him to address the issue but, according to Gachechiladze, no response followed. 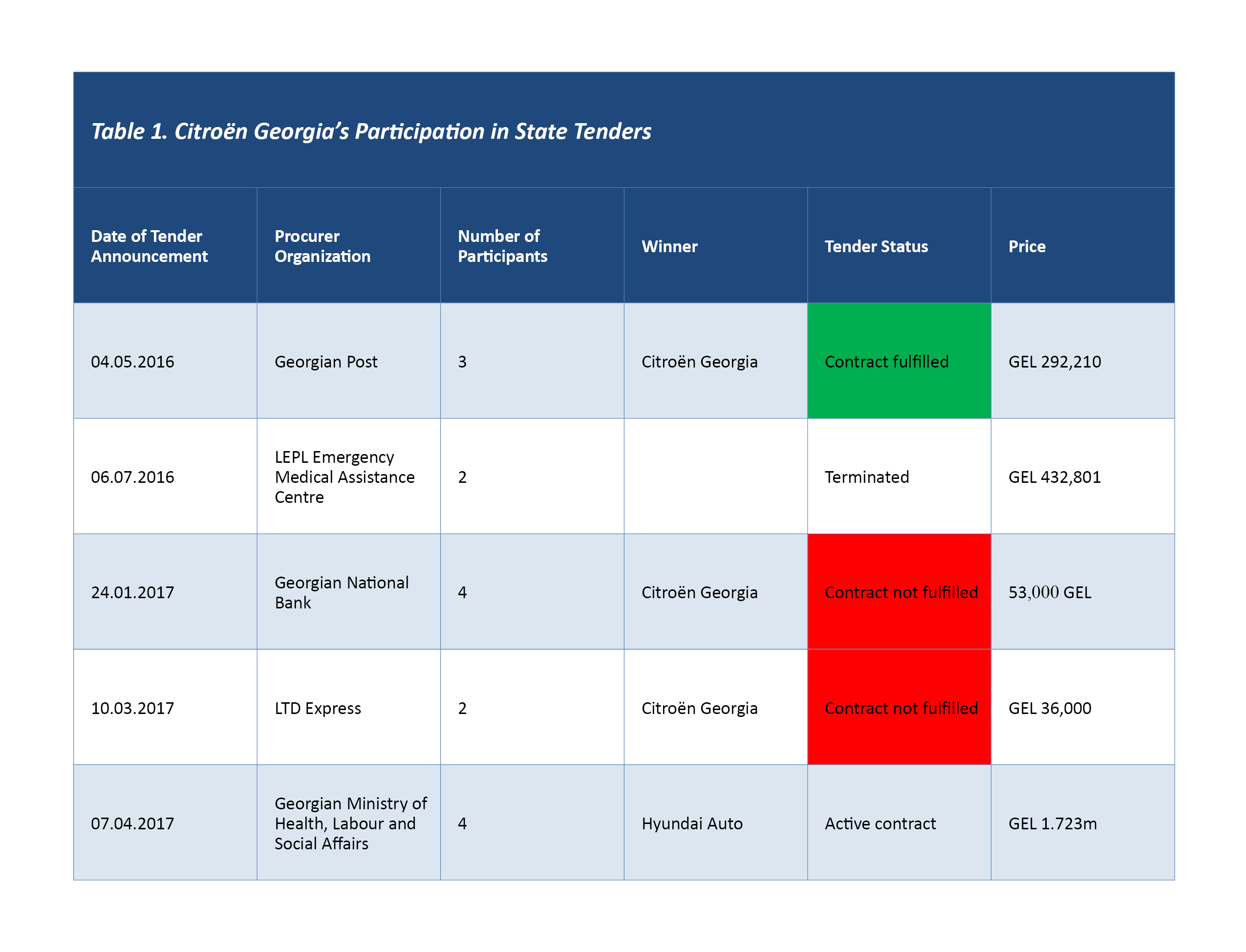 Since its establishment, the company has participated in five tenders and won three of them (see Table 1). First, the company won the tender of Georgian Post. Interestingly, when this tender was announced (4 May 2016), Citroën Georgia had not even been founded. Despite this, the company which was created as late as on the 16th day after the tender was announced won the contract. In this case, it is also noteworthy that, as the public is aware, several high-ranking officials of Georgian Post, including its General Director Levan Chikvaidze, are friends with brothers - Levan and Giorgi Gachechiladze. After winning the Georgian Post tender, Citroën Georgia won two more tenders but, in both cases, failed to fulfil contract obligations.

One of the disputed tenders that the Citroën Georgia representatives are referring to concerns the procurement made by LEPL Emergency Medical Assistance Centre. Citroën Georgia presented the best offer to the buyer but failed to present a document proving compliance with one of the technical requirements of the tender (so-called Crash Test).

Neither did Citroën Georgia win the tender announced by the Ministry of Health in 2017. Despite offering the lowest price compared to all other participants, it was eventually disqualified due to the failure to present or presenting non-compliant technical documents. 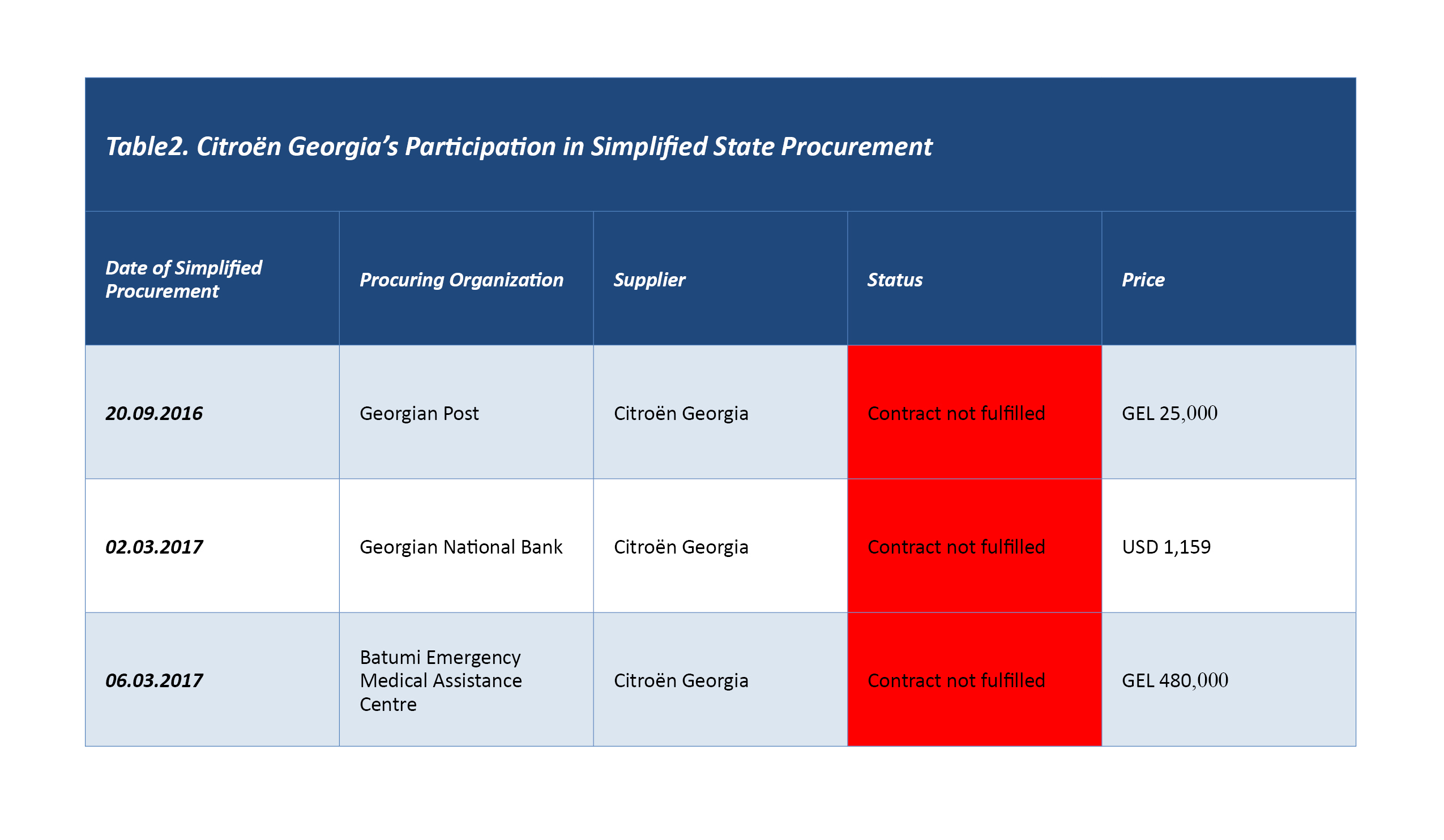 In 2016-2017, Citroën Georgia won the total of three contracts through simplified procurement process (see Table 2). In all three cases, the company failed to fulfil the obligations envisaged by the contract as it failed to provide vehicles in a timely manner. Batumi Emergency Medical Assistance Centre requested to blacklist the company for its failure to fulfil obligations.

According to the Procurement Agency’s statement, Citroën Georgia was blacklisted four times due to the failure to fulfil its obligations (see Table 3). 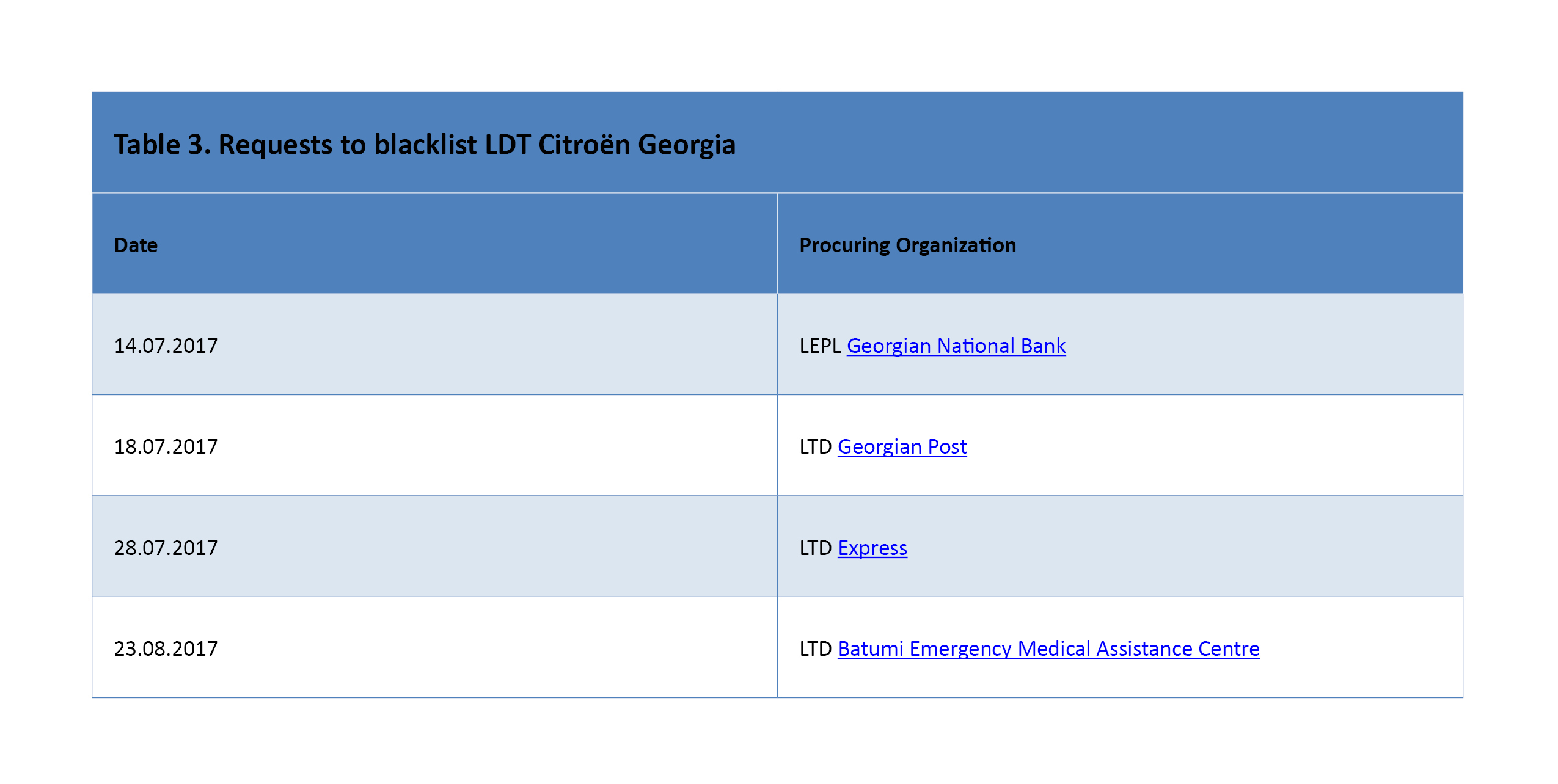 However, the Citroën Georgia lawyer said in a telephone conversation with us that the decisions regarding blacklisting the company (apart from the last, fourth decision) were appealed by the company and its appeals were upheld. Our efforts to obtain this information on the portal of the Procurement Agency or through other pubic sources proved futile.The Agency’s statement also says: “It has to be considered that these contracts were signed with the supplier not only bypassing electronic tenders but also without following the tender procedures – through simplified procurement process. The company failed to fulfil the undertaken obligations in every single case. It needs to be taken into account that all decisions regarding blacklisting have been put into effect since LTD Citroën Georgia has not appealed them in court in accordance with the rules of procedure.”

5. General Situation with Regard to Motor Vehicle Tenders in 2015-2017

Table 4 provides the number and value of contracts signed as a result of tenders for motor vehicles from 2015 until the first half of 2017, including the share of tenders without competition.

Marked red are the companies which Citroën Georgia has accused of forming a cartel and against which it has lodged its complaint.

From 2015 until the first half of 2017, sole supplier tenders account for 71 percent of the amount spent on procurement of motor vehicles through tenders.

It is also noteworthy that the share of the amount spent through sole supplier tenders was characterized by an upward trend between 2015 and 2017.