Supplements and Bonuses in Adjara Government 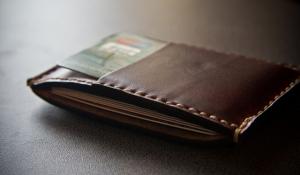 Transparency International Georgia periodically publishes information on the amount of remuneration of employees in public institutions, frequency of disbursing supplements and bonuses and general administrative expenses.

This time we are pleased to present 2016 statistics on employee compensation in the Autonomous Republic of Adjara, recommendations worked out by the organization for improving legal regulations and existing practices.

According to the law of Georgia on public service, remuneration of a public employee includes salary, bonus and supplement. For a specific position, salary represents fixed compensation. Public officials receive it on a monthly basis, in a pre-determined amount. Bonuses and supplements represent additional compensation. The law effective in 2016 did not specify frequency of their disbursement.

The government of the Autonomous Republic of Adjara adopted a decree on 21 January 2015 that defines new supplement amounts for government officials and public servants. According to the decree:

In March 2015, Transparency International Georgia released a report on inequitable distribution of salary supplements in the Government of the Autonomous Republic of Adjara.

When discussing the legal part of the remuneration practice, it is worthwhile to mention resolution N499 of the Government of Georgia adopted on 15 July 2015, which determines the amount of bonus in public institutions. Congruent to the given resolution,

In 2016, officials of the ministries and subordinate institutions of the Adjara Government: Chairperson of the Government, minsters and deputy ministers, heads and deputy heads of departments have not received a bonus.

Taking into consideration the existing legislation, the most equitable practice of issuing bonuses has been established by Adjara Tourism Department: bonuses are granted to employees based on the minutes of the Bonus Commission as well as explanatory cards prepared by the relevant structural units. In addition, monthly bonuses disbursed to public servants in the Department of Tourism differed in amount, which suggests that bonuses were largely dependent upon the performance results. However, like other institutions, in December 2016, all employees of this agency were awarded with a bonus equal to 100% of positional salary.

The number of civil servants employed in government agencies in Adjara has not decreased.  Tendency of increasing staff units was not observed either.

Annual labor compensation for officials on similar positions (all four ministers, their deputies, heads subordinate institutions, heads of departments and their deputies) is the same in Adjara.

Analysis of the data received from public sources shows that in the majority of branches of Adjara government and government subordinate institutions, supplements issued in 2016 did not depend on performance results or analysis of the work done. It is noteworthy that in 2016, salary supplements were issued each month, to all ministries and subordinate agencies.

The amount of bonuses disbursed in other governmental agencies is identical each month, which suggests that bonuses could be used to increase monthly salary – such practice contradicts the current legislation. After analyzing collected information, we could not establish connection between the completed work/quality and the bonus.

Performed analysis has revealed that supplements are also issued to increase monthly salary of public servants, as in fact, they are issued in the amount equal to the fixed salary;

From 1 January 2016 to December 31, the cumulative sum of salaries, bonuses, supplements, fuel and business trip expenses for government agencies and ministries makes up GEL15.407.596. Out of these, remuneration – GEL 12 058 202 - has been distributed in the following manner: 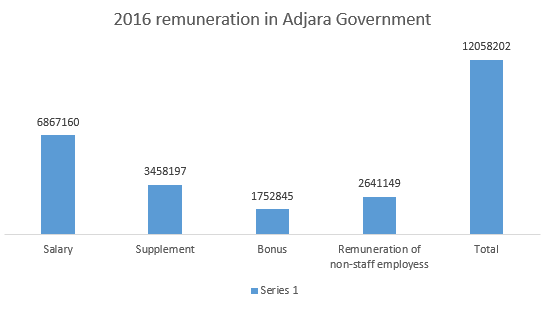 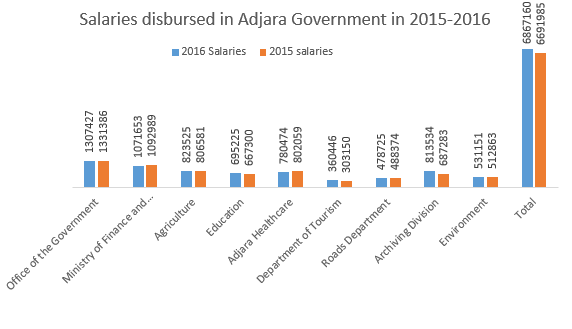 (For detailed information on remuneration and administrative costs of Adjara Government in 2016, refer to the following link; here, you can get familiar with 2015 costs). 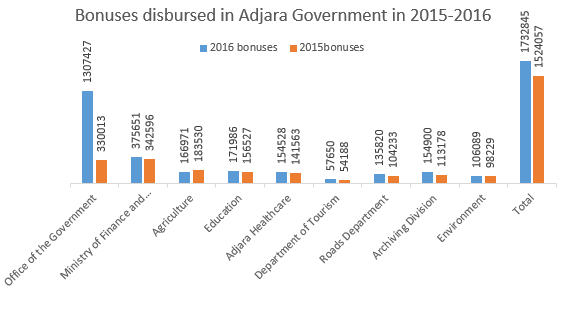 In 2016, the highest disbursement of bonuses - 408,350 GEL is observed in the office of Adjara Government; the lowest amount - 57,500 GEL in the Department of Tourism and Resorts.

In terms of non-staff remuneration, the highest amount – GEL 1,619,314 was disbursed in Roads and Melioration Systems Department.

As mentioned above, average ratio of bonuses and supplements to salary equals 72%. The highest rate is observed in the Ministry of Finance and Economy, the lowest - in the Department of Tourism. 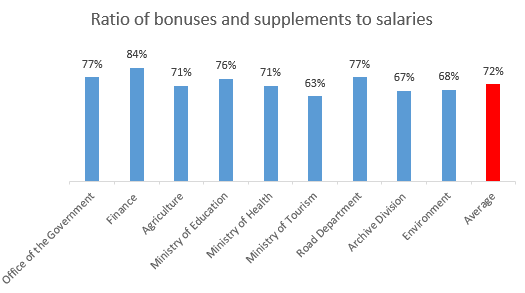 In 2016, the Chairman of the Government of Adjara received 35,400 GEL as a salary supplement. In total, remuneration of the Chairman of the Government totaled 69,504 GEL in 2016. Detailed information on remuneration of the members of Adjara government and subordinate institutions is presented on the following link - as mentioned above, annual income for the same positions in Adjara is identical to each other.

Our opinion and recommendations

Examination of the practice by Transparency International - Georgia shows that the resolutions adopted by the Government fell short of resolving the problem - new regulations have led to replacement of bonuses with salary supplements. As we have repeatedly emphasized, one of the main reasons is that the regulations themselves contain a number of shortcomings.

The situation is further aggravated by the fact that the Parliament and the Government of Georgia are stalling implementation of proposed amendments to the Law on Public Service. The civil service reform also envisaged adoption of the law on “remuneration of labor in public institutions”, which should have been initiated by the Government before 1 September 2016. The given law was supposed to replace currently effective system of reimbursement, which, in turn, would have triggered large-scale amendments to the law on the budget. However, as noted above, neither the law has been adopted nor the new remuneration system has been reflected in 2017 budget.

Despite postponement of the planned reforms, we call on the Government of the Autonomous Republic of Adjara to refrain from bypassing the requirements of law while disbursing bonuses and supplements. It is particularly important against the background when 10% reduction of administrative expenditures by the central government turned out to actually equal 3% and bureaucratic costs of the government are growing year in, year out.