The Covid-19 pandemic has reduced Georgia's economic dependence on other countries, including Russia. In 2019, Georgia received USD 1.6 billion in revenue from Russia through tourism, remittances and exports, which was 9% of Georgia's GDP. In 2020, Georgia received about USD 900 million in revenue from Russia through the same channels, which was about 5.7% of GDP.

In 2020, Georgia's economy depended on Russia mainly through foreign trade and remittances. Particularly high dependence was observed in the export of Georgian wine and the import of Russian wheat. Georgia is less dependent on Russian electricity and gas. Moreover, Russian investments in Georgia are small.

In recent years, exports of Georgian products to Russia have increased and in 2019 reached USD 497 million. The impact of the Covid-19 pandemic on exports to Russia has been significant, and in 2020 it decreased by 11.2%. However, due to the further decline in Georgia's total exports, Russia's share in Georgian exports slightly increased - from 13.1% to 13.2%.

Compared to 2019, in 2020, imports from Russia to Georgia decreased by 9.2%, although since 2012, imports of Russian products have almost doubled to USD 900 million. Russia ranks second in Georgia's importers after Turkey.

Due to the pandemic, in 2020, the dependence of Georgia’s economy on tourism, including Russian tourists, was radically reduced. In 2020, 208,677 Russian visitors came to Georgia, which is 86% less than in 2019. Before pandemic, Georgia was most dependent on Russia through tourism. In 2019, Russian visitors spent about USD 700 million in Georgia. In 2020, this figure stood at USD 50 million.

Many scholars believe that Georgia's economic dependence on Russia causes some threats, as Russia has repeatedly used economic leverage against Georgia over the past 15 years. For example, in 2006 Russia cut off natural gas and electricity supplies to Georgia, then it banned the export of products from Georgia to Russia. At the end of the year, it started deporting Georgian citizens. After the events of June 20, 2019, the Kremlin banned flights from Russia to Georgia and this restriction is still in force.

Therefore, it is important to be informed about the level and trend of Georgia's dependence on Russia. Last year Transparency International Georgia has explored key areas where Georgia's economy heavily depended on Russia.[1] These areas are: foreign trade, tourism and remittances sent by emigrants. This time we offer an updated study that highlights 2020 trends. Of particular interest to the study was the impact of the Covid-19 pandemic on the Georgian economy's dependence on Russia.

The export of Georgian products to Russia was fully restored in 2013 after the change of the Georgian government. In 2013-2014, Georgia's exports to Russia increased by 487%, compared to 2012, and reached USD 275 million. In 2015, this figure decreased due to the economic crisis in Russia, but in 2016, rapid growth began again, and in 2019, Russia's share in Georgian exports was 13.2%. Last year, Georgia exported USD 497 million worth of products to Russia, which was 2.8% of Georgia's GDP.

In 2020, the spread of the Covid-19 significantly affected Georgia’s economy, including trade. Compared to 2019, Georgia's exports to Russia fell by 11.2% in 2020. However, Russia's share in Georgia's total exports slightly increased from 13.1% to 13.2%, as the country's total exports fell more (by 12%) than exports to Russia. In 2020, USD 441 million worth of products were exported from Georgia to Russia. 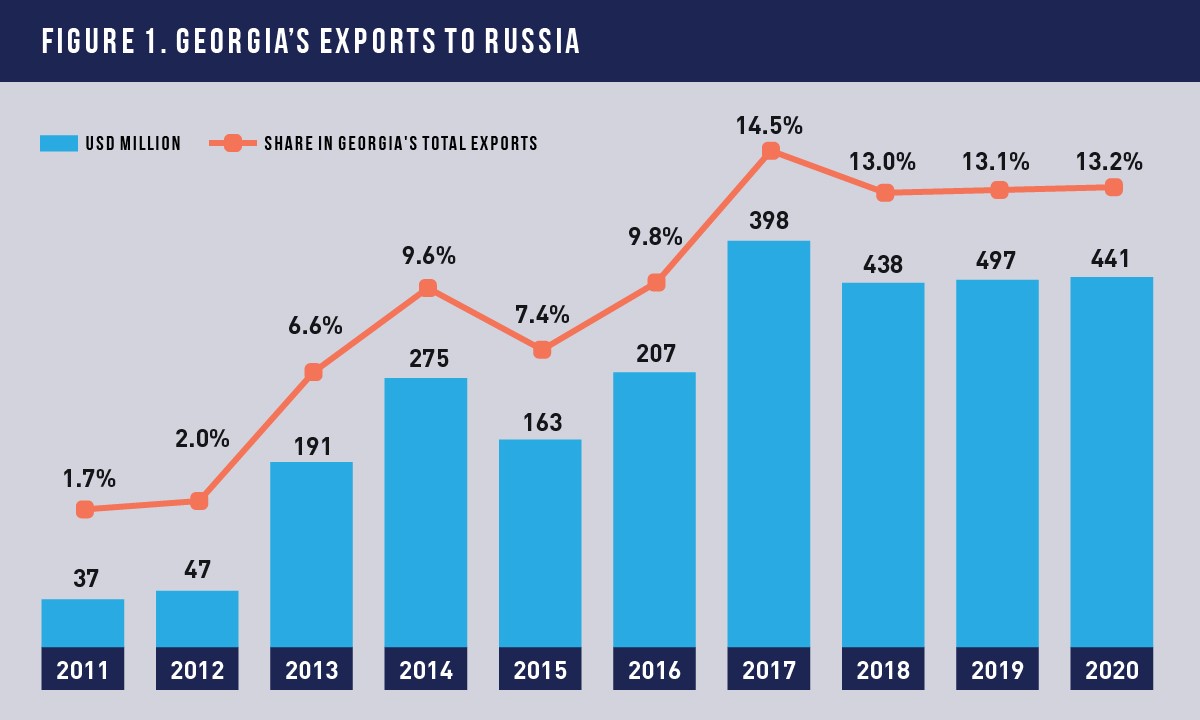 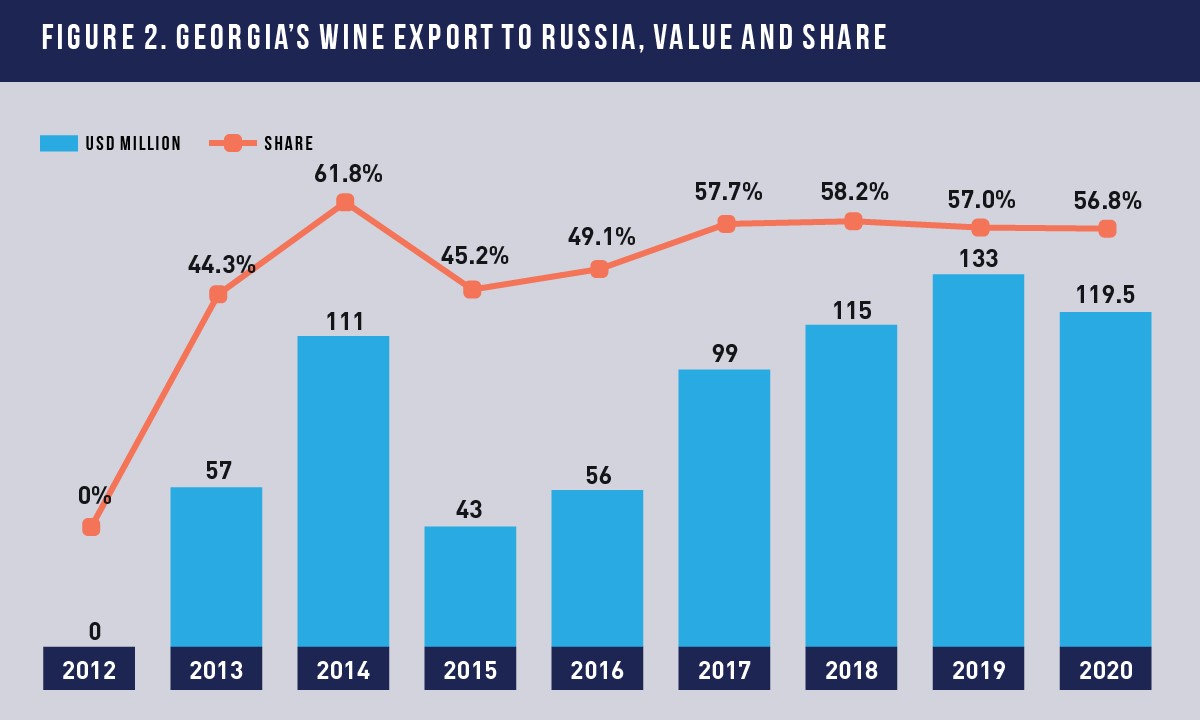 High dependence of Georgia’s wine exports on the Russian market carries certain political risks. As we have already mentioned, the 2006 boycott of Georgian products by Russia, as well as potential restriction of Georgian wine exports to Russia, discussed at the Russian Duma due to the events of June 20, 2019, clearly showed that reliance on the Russian market is a challenge to Georgia's economic and political security. People living in Kakheti region most heavily depend on the revenue from wine exports, and in case of the export ban, they will suffer the most, since many families do not have an alternative source of income.

Georgia has a negative trade balance with Russia - we import more products than we export. Imports from Russia have had a growing trend in recent years. Imports of Russian products have almost doubled since 2012. Russia ranks second in Georgia's imports and is only behind Turkey.

Gasoline has the largest share in imports from Russia (15%). Although more than 15,000 tonnes of gasoline was imported from Russia in 2020, the value of gasoline imports fell by USD 70 million due to price reductions.

Wheat is the second largest imported product from Russia. In 2020, Georgia imported 488 thousand tonnes of wheat from Russia, which was valued at USD 107 million. Compared to 2019, it is an 18% increase. At the same time, in 2020, 99.4% of the wheat imported to Georgia was Russian wheat. The focus on wheat is important, as up to 70% of the wheat consumed in Georgia comes from Russia.

Such a high dependence on wheat imports from Russia also poses some dangers, as the cessation of wheat imports from Russia to Georgia for political or other reasons will lead to a shortage of wheat in Georgia for some time and increase the price of bread. Russia has twice temporarily suspended its wheat exports due to the Covid-19 pandemic last year. The average price of one tonne of imported Russian wheat has increased from USD 210 to USD 220.

Sunflower oil also accounts for a significant share (up to 5%) of imports from Russia, which was increased by 21% to USD 41 million, in 2020.

In recent years, Georgia has been more dependent on tourism revenues from Russia than on exports of products. In 2019, Georgia received USD 497 million from exports to Russia, and about USD 700 million[5] - from Russian visitors[6].

In 2011, the share of Russian tourists in total tourism of Georgia was 7.1% - a total of 220 thousand people entered the country. Tourism from Russia has been growing rapidly since 2012. In 2018, 1.4 million Russian citizens visited Georgia and its share increased to 16.2%.

Due to the Covid-19, the number of visitors to Georgia decreased by 81%, in 2020. A total of 1.7 million visits were made, mainly before the border closure (January-February), primarily related to cargo transit and imports. In 2020, 208,677 visitors came from Russia to Georgia, which was 86% less than in 2019. The share of Russian visitors in Georgia’s total tourism decreased to 11.9%. In 2020, 172 thousand visitors arrived from Russia at the beginning of the year, before the border was closed. 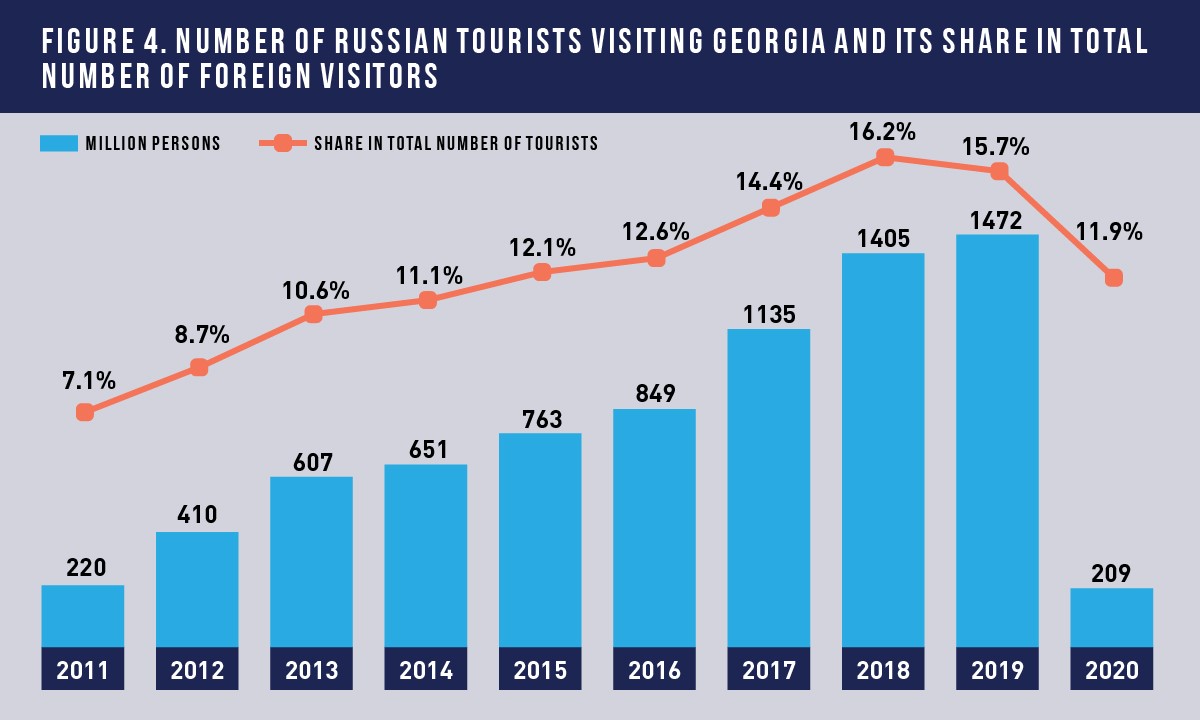 Prior to the outbreak of the Covid-19 pandemic, Georgia would have lost about USD 700 million a year in revenue if the Russian government had banned its citizens from traveling to Georgia.

Due to the spread of the virus, because of almost full termination of tourism from April, 2020, Georgia lost about USD 2.7 billion in revenue. This is almost 4 times more than Georgia could suffer from the complete interruption of tourism from Russia.

In 2020, compared to 2019, the money transferred to Georgia increased by USD 153 million (8.8%). The growth against the backdrop of the pandemic seems illogical, as there is also an economic crisis in those countries from which emigrants send money. It turned out that the increase in remittances was caused of the fact that the funds that emigrants previously used to personally bring to Georgia, now were transferred due to travel restrictions. In 2020, the trend of previous years continued and remittances from Russia decreased by USD 65 million (15%). Russia's share in total remittances fell to 19.3%.

Despite the reduction, USD 364 million transferred from Russia in 2020 was 2.1% of Georgia's GDP, thus being a significant amount. 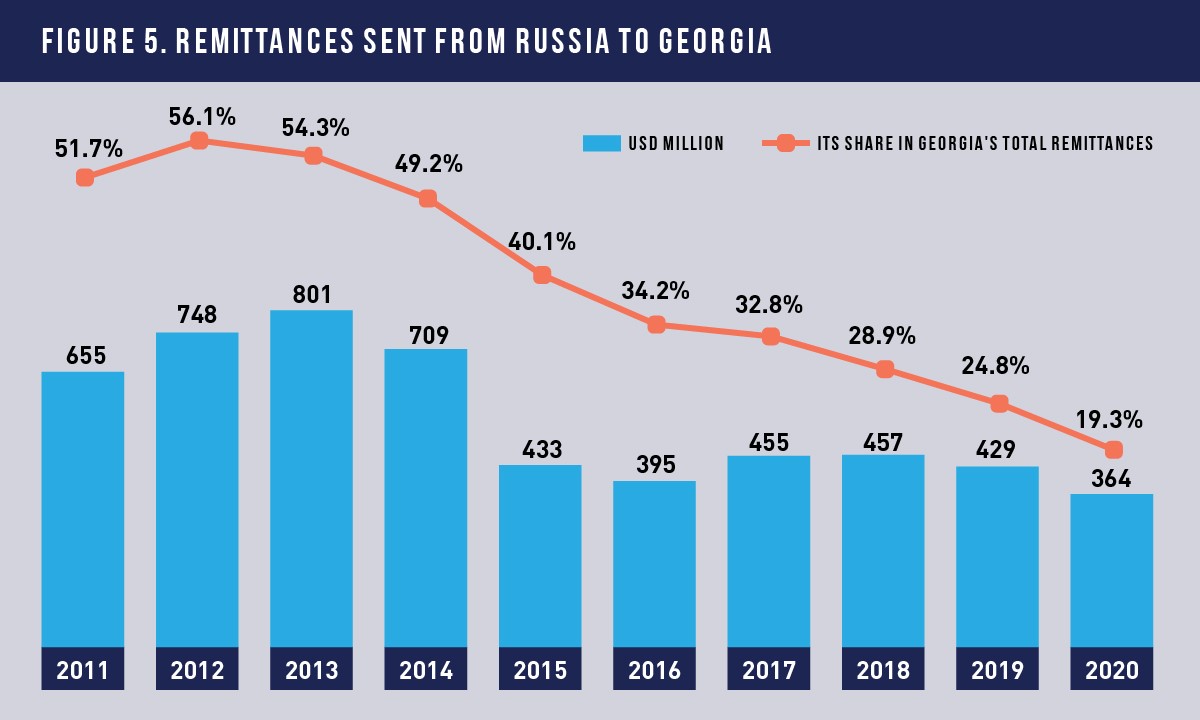 If we disregard the effect of the Covid-19 pandemic, Georgia would lose about USD 429 million a year if the Russian government could fully suspend remittances. Now this amount has been reduced to USD 364 million. However, this is a very unrealistic scenario, because Georgian emigrants would send money through other channels. Mass deportation of Georgians from Russia is the only way to stop money transfers, but since a large part of Georgians living in Russia are Russian citizens, it is virtually impossible scenario.

The pandemic has "naturally" reduced Georgia's economic dependence on Russia. After the end of the pandemic period, Georgia will have the opportunity to structurally transform its economy and become less dependent on Russia. At least, this will be inevitable in the case of tourism, as recovery of Georgia’s tourism sector, including Russian tourists, will likely take several years. However, there is also a danger that, after lifting of the pandemic restrictions, resource-shrinking businesses will be able to reach easily accessible markets, both in terms of exports and imports, which could further increase Georgia's dependence on Russia.

At present, high dependence of wine exports on the Russian market and wheat imports from Russia remain the main challenges for Georgia's economic security.

Georgia's economy suffered far more from Covid-19 than Russia can potentially hurt us economically. This gives the Georgian population and government an opportunity to be less vulnerable to economic sanctions expected from Russia, and develop some sort of immunity.

[6] There is a conditional difference between a visitor and a tourist. Citizens of other countries who come from abroad are visitors, but those who spend more than 24 hours in Georgia are given the status of a tourist as well as a visitor.