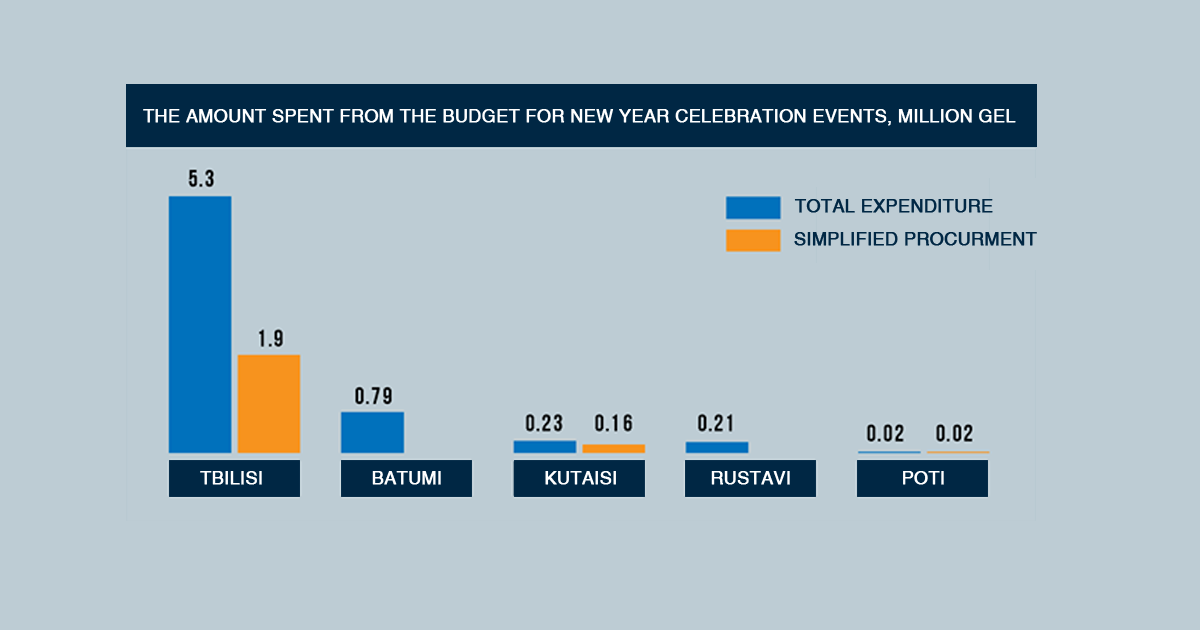 Five self-governing cities of Georgia (Tbilisi, Batumi, Kutaisi, Rustavi and Poti) in total spent up to GEL 6.5 million from their budgets for the 2019 New Year and Christmas celebration. Tbilisi spent 82% of the mentioned amount.

The reason usually given by the City Halls for justification of simplified procurement was force majeure or high public interest in holding the event. However, we believe, this was caused of improper planning rather than of procurement specifications.

Low competition was the main problem in the New Year related tenders, which is not a new observation. IDO SRL, an Italian company, won a tender valued at GEL 2 million, which was announced by Tbilisi City Hall. Adjaraganateba, LLC also won the GEL 428 000 valued tender without competition announced by Batumi City Hall. Only two companies participated in a tender announced by Rustavi City Hall and one of them was disqualified.

Tbilisi City Hall (including the state-owned Tbilservice Group, LLC) in total spent approximately GEL 5.3 million on the New Year celebration events. 36% of purchases was made through simplified public procurement process.

In addition, the Administration of Tbilisi City Hall spent approximately GEL 1 720 974 through simplified procurement on organizing the New Year and Christmas events. The reason for justification of simplified procurement was force majeure or high public interest in holding the event. Among other contracts, the following ones were worth mentioning:  the contract valued at GEL 52 140 was signed with Tbilisi Park, LLC. On 18 October 2018, Gela Dighmelashvili, the director of Tbilisi Park, donated GEL 20 000 to Salome Zurabishvili, a ruling party-backed presidential candidate; the contract valued at GEL 6 752 was signed with Luma Development, LLC. In November 2017, Otar Tevdoradze, the owner of this company, donated GEL 30 000 to the ruling Georgian Dream party.

In 2018, Batumi City Hall did not purchase accessories needed for the New Year celebration. The City Infrastructure Development Unit, a N(N)LE[1] established by Batumi City Hall, purchased decoration services for the New Year and Christmas events through electronic tender. The value of this tender was GEL 428 423. Adjaraganateba, LLC won this tender without competition and installed and uninstalled Christmas tree and its decorations.

Batumi Culture Center, another N(N)LE of Batumi City Hall, spent GEL 360 200 for the New Year celebration events, out of which GEL 177 700 was spent on organizing expenses and GEL 182 500 – on remuneration of singers and musicians.

On 11 October 2018, Kutaisi City Hall announced an electronic tender without reverse auction (NAT) valued at GEL 97 141 for purchasing lights for the New Year celebration events. Geraska, LLC and Dandi, LLC participated in this tender. Dandi’s bid was GEL 94 804 and it won the tender. However, Geraska filed a complaint and Dandi was disqualified due to improper technical documentation. As a result, the City Hall signed a contract with Geraska. On 28 December, the City Hall terminated the contract signed with Geraska due to delays in delivery of work.  On December 26, 2018, Kutaisi City Hall, ultimately, purchased the mentioned lights for GEL 99 485 through simplified procurement from Dandi, LLC, which was justified by force majeure. As a result, the City Hall paid GEL 2 300 more than the initial price of the first tender.

It should be noted that Dandi, LLC is one of the primary suppliers of New Year celebration lights for many municipalities of Georgia. For the 2019 New Year celebrations the following municipalities bought lights from Dandi mainly through simplified procurement: Lanchkhuti, Lagodekhi, Tskaltubo, Tkibuli, Kazbegi, Akaltsikhe, Gori, Borjomi, Khoni, Samtredia, Martvili, Kareli, Gardabani, Kaspi, Sighnaghi, Poti, etc.

Kutaisi City Hall spent GEL 42 955 on organizing the New Year celebration events, GEL 19 900 – on the stage and sound for the New Year concert and GEL 10 000 – on decorations of the Christmas tree.

Rustavi City Hall spent GEL 208 485 on the New Year and Christmas celebration events. It purchased all goods and services through an electronic tender without reverse auction (NAT). The following two companies participated in this tender: International Center for Youth, LLC and Geotourist+, LLC. The bid of Geotourist+, LLC was GEL 198 041 and the bid of International Center for Youth, LLC was GEL 205 900. Based on the bids, Geotourist+ won the tender and on 19 December Rustavi City Hall signed a contract valued at GEL 198 041. However, in five days, on 24 December the City Hall amended the contract and increased the contract value up to GEL 208 000. According to the amended contract, certain technical conditions of procurement object have changed, which caused an increase of contract value. As a result, Geoturist+ got more money than the bid of its competitor.

Poti City Hall allocated GEL 19 600 for the New Year and Christmas celebration events. On 4 December 2018, the City Hall announced a tender valued at GEL 16 610, but due to absence of bidders the tender could not proceed. Ultimately, the City Hall bought the needed serviceს through simplified procurement for GEL 16 610 from Nana Tchitanava, an individual entrepreneur.