Gifts received by public officials need to be studied further

Transparency International Georgia continues to monitor asset declarations submitted by public officials. Gifts received by some officials have recently drawn public attention. When high-ranking officials receive monetary gifts, it involves certain corruption risks. This is why the Civil Service Bureau must study each one of such cases.

The existence of the system of asset declarations serves two main purposes: prevention of unlawful enrichment of public officials and the discovery of the conflict of interest cases. Based on these purposes, the law establishes a whole range of prohibitions for public officials: for example, they are not allowed to hold any position or perform paid work in private sector in parallel with being in civil service, also, to accept any gift that could influence their work while in office or whose value exceeds 5 percent of their annual salary. Similar restrictions apply to public officials' family members. At the same time, public officials are obliged to include in their asset declarations any gift that they or their family members receive if its value exceeds GEL 500.

These restrictions do not apply to the gifts received by officials from their family members or close relatives. By itself, this exception can be reasonable and justified but, at the same time, there is a risk that (in the absence of proper oversight) this exception could become a "loophole" in the law which corrupt officials would use to conceal or "launder" illegal income – that is, the unlawful income would be declared as a gift received from a family member or a close relative.

It is therefore important that, in each case when a civil servant declares a sizeable gift (a large sum of money or valuable property or service), such a transaction is checked within the framework of the asset declaration monitoring system in order to establish whether this is an attempt to legalize illegal income.

For the same reason, Transparency International Georgia is also closely monitoring gifts received by public officials. Below you will find a list of public officials who (according to their asset declarations) have recently received sizeable gifts.

Transparency International Georgia examined asset declarations submitted by representatives of the executive, legislative and judicial branches of the government in 2017-2018. Several cases discovered as a result of this study have proved especially interesting.

Iuri Nozadze is violating the Law on the Conflict of Interest and Corruption in Public Institutions as his wife annually receives a significant monetary gift the value of which exceeds the limit set by the law.

Specifically, in 2013-2016, his wife, Lena Mamatsashvili received a gift of GEL 80,500 from Akhali Servisi, LLC, a company linked to Bidzina Ivanishvili and Cartu Group. To be more precise, Akhali Servisi, LLC is registered at the same address where Cartu Bank is located (39a, Ilia Chavchavadze Avenue, Vake-Saburtalo District, Tbilisi) and indicates office@cartugroup.com as its e-mail address. The company is owned by Ringold Finance Limited, an offshore company registered on the Virgin Islands. Registered at the same address is Finservice XXI, LLC: Iuri Nozadze himself was its director before becoming a deputy minister of agriculture. Finservice XXI features in the process of land management – tarnished by signs of corruption – in the Botanical Garden and the adjacent territory by Tbilisi Mayor's Office. It is also noteworthy that, in 2016, Iuri Nozadze donated GEL 20,000 to Georgian Dream – something he never mentioned in his asset declaration.

According to the deputy minister's explanation, Akhali Servisi, LLC was created with the aim of providing friends, actors and singers with financial aid, and his wife has been receiving it for the past seven or eight years.

Archil Gogsadze is violating the Law on the Conflict of Interest and Corruption in Public Institutions as he holds the post of a director of an enterprise marked as "active" by the Public Registry. At the same time, the declared expenses of his family significantly exceed its income, which should become a basis for checking his asset declaration by the Civil Service Bureau.

According to the asset declaration submitted in 2018, Archil Gogsadze owns 50 percent of shares of two companies and holds a director's post in one of them. According to him, however, the companies are no longer operational. Despite this, according to the Public Registry record, Aguna, LLC is an active company and this is precisely where Archil Gogsadze is registered as a director, which constitutes a violation of the Law on the Conflict of Interest and Corruption in Public Institutions. At the same time, his business partner is Levan Gogsadze. It is noteworthy that Levan Gogsadze donated GEL 37,950 to Georgian Dream in 2016.

As for the second company mentioned in the declaration, the last record concerning Grand, LLC was made by the Registry on 11 May 2017 according to which Archil Gogsadze was an active shareholder of the company.

It is also noteworthy that, according to the declaration submitted by the Baghdati mayor, his family's expenses significantly exceed its income.

It is also noteworthy that, according to the declaration submitted by the Baghdati mayor, his family's expenses significantly exceed its income. 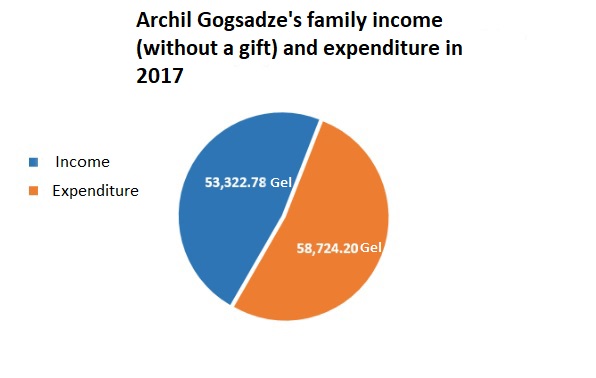 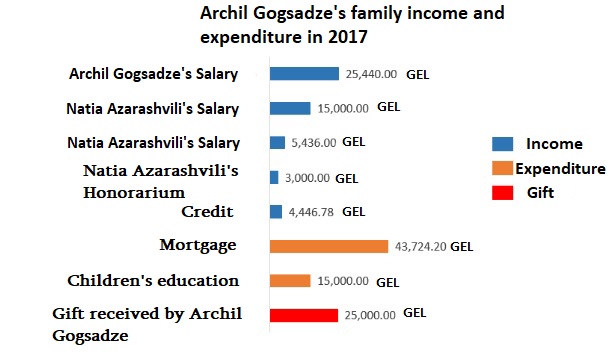 According to the declaration, Archil Gogsadze paid USD 17,420 as interest on his mortgage loan. The average official exchange rate of Georgian Lari to US Dollar in 2017 was 2.51. Correspondingly, Archil Gogsadze's expenses in the form of mortgage loan interest payments constituted GEL 43,867.

In total, the declared expenses of Archil Gogsadze (the loan and children's education fees) amounted to GEL 58,867, which exceeds his declared income (GEL 52,882.78) by approximately GEL 5,984.

According to the Law of Georgia on the Conflict of Interest and Corruption in Public Institutions, the total value of gifts received by a civil servant in the course of one year must not exceed 15 percent of his or her annual remuneration for the work performed while holding the office, while the value of a single gift must not exceed 5 percent of the annual remuneration. The total value of gifts received by each member of a civil servant's family in the course of a year covered by the declaration must not exceed GEL 1,000, while that of a single gift – GEL 500.

At the same time, property transferred to a civil servant or his or her family member free of charge or on favorable terms or their full or partial relief from property-related obligations by a close relative does not constitute a gift; correspondingly, the law allows civil servants to receive an unlimited amount/size of money/property as a gift from close relatives. Such a situation involves a risk that property received as a gift from a relative could become a means to avoid declaring certain income or to justify unlawful/unsubstantiated income. Therefore:

The study of asset declarations also revealed that Deputy Minister of Agriculture Iuri Nozadze and Baghdati Municipality Mayor Archil Gogsadze have violated the Law on the Conflict of Interest and Corruption in Public Institutions. Correspondingly,