Assessment of the 2016 Parliamentary runoff elections

In overall, the electoral process was conducted in a calm environment, the absolute majority of polling stations opened and closed on time. The drawing and counting of votes was held without without any moderately seriously violations. Our observers found around 70 relatively serious procedural violations. We have filed 11 complaints. These violations could not have a significant influence on the outcome of the elections.

The electoral administration delivered a satisfactory performance on all three levels. In overall, the CEC supported for a timely counting of the votes and publication. At this moment around 65% of preliminary votes are published. The CEC conducted periodically conducted briefings to notify the public of the incoming results. 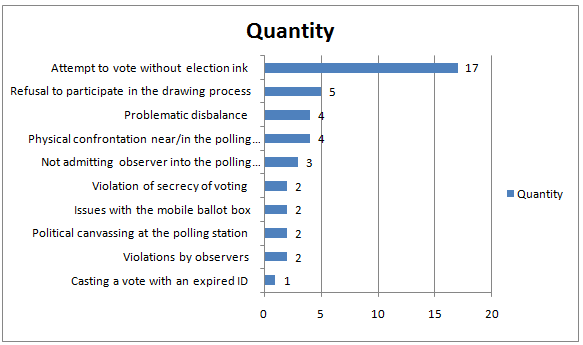 We believe that it is expedient to: