Georgia ranks #5 in the world in Budget Transparency

According to the Open Budget Survey (OBS), conducted by the International Budget Partnership (IBP), Georgia got 82 points out of 100 in state budget transparency[1]. It is 16 points more than the result of 2015 survey. 82 points allows Georgia to be ranked number 5 (16th place in 2015) among 115 countries following New Zealand, South Africa, Sweden and Norway.

The entire research process took approximately 18 months. The OBS 2017 assesses only events, activities, or developments that occurred up to 31 December 2016. Transparency International Georgia has been participating in this research and assessing Georgia’s progress since 2012.

Drawing on internationally accepted criteria developed by multilateral organizations, the OBS uses 109 equally weighted indicators to measure budget transparency. These indicators assess whether the central government makes eight key budget documents available to the public online in a timely manner and whether these documents present budget information in a comprehensive and useful way. The mentioned eight documents are: 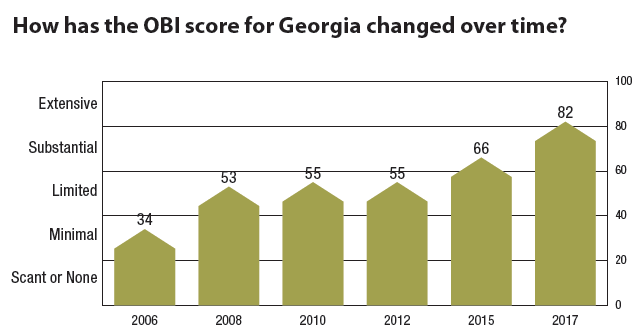 Transparency alone is insufficient for improving governance. Public participation in budgeting and budget oversight are vital to realize the positive outcomes associated with greater budget transparency. That’s why, the OBS focuses on these two issues as well. Georgia’s performance in this regard are less impressive than in budget transparency. Georgia got only 22 points out of 100 (17th place in the world) in terms of public participation and 74 points in budget oversight (18th place in the world).

We would like to congratulate Georgia for an impressive success and hope that the Government of Georgia will pay more attention to public participation and other remaining weaknesses.

Despite the impressive performance, the IBP proposes a number of recommendations for the Government of Georgia in order to continue improving its scores. The most important recommendations are related to enrichment of budgetary reports and provision of more tools for public participation in budgetary processes.

[1] The Open Budget Survey (OBS) focuses on three issues. Budget transparency is the most important one and Open Budget Index (OBI) assesses only this topic. The rest two issues (public participation and budget oversight) are also parts of OBS, but not OBI.