Women in self-government: Gender balance in the municipalities of Western Georgia

In June and July 2014 Georgians elected their municipal council (sakrebulo) members in 71 districts, mayors in 12 self-governing cities and municipal ‘governors’ (gamgebeli) in 59 districts.

For years, several local and international organizations have been calling on the Georgian government to promote women's political participation at the central as well as the municipal level of public administration.

Last year TI Georgia wrote about women's participation in the municipalities of Samegrelo-Zemo Svaneti and Guria prior to the 2014 local elections. Our research showed only 12% of the sakrebulo members were women, while men held offices with the decision-making power.

In parallel to this study, TI Georgia collected information on women's participation in public administration in the European states. Several examples are provided below:

(Source: "Atlas of Women and Men Equality in Germany" report, produced by the Federal Ministry for Family Affairs, Senior Citizens, Women and Youth)

Germany is divided into 13 federal lands and 3 cities having the federal land status. Under the Constitution, each land exercises ultimate self-government and in 4-5 years the legislative bodies (Landtags) are elected, which then constitute and approve regional government and elect its head (Minister-President).

Lands are divided into districts (Kreis) and independent cities (Kreisfreie Stadt). The Lands of Hamburg and Berlin are divided into districts (Bezirk), the districts - into cities (Stadt) and communities (Gemeinde), independent cities - into settlements (Ortschaft), districts of the Hamburg and Berlin Lands - into local quarters (Ortsteil), cities, communities, settlements (Wohngebiet). Representative and executive authorities exist at all levels of local self-government. 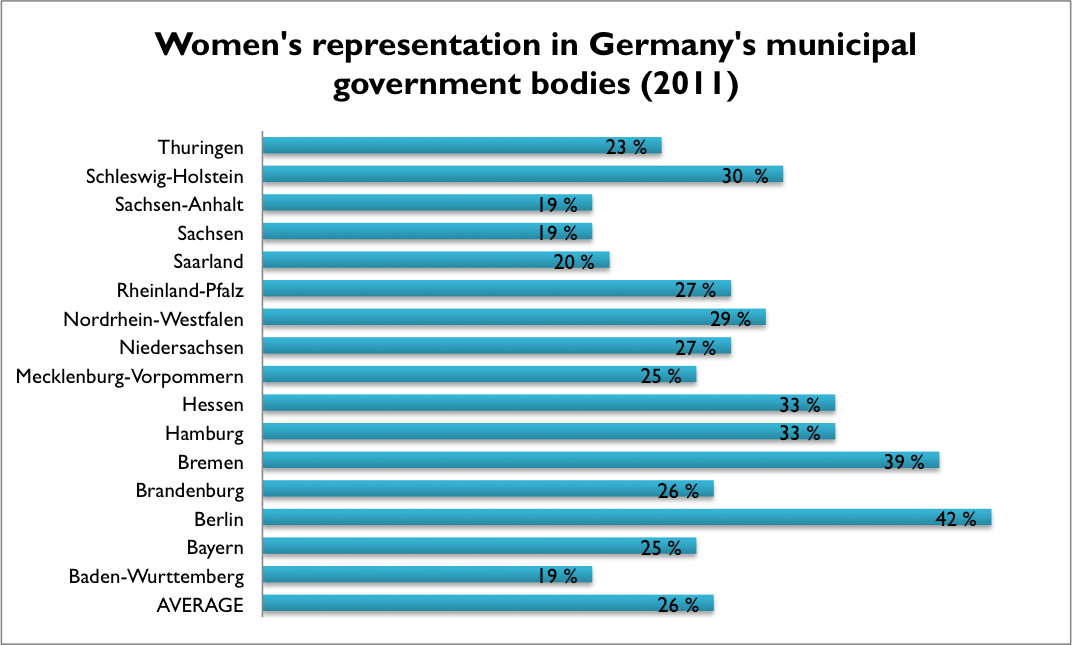 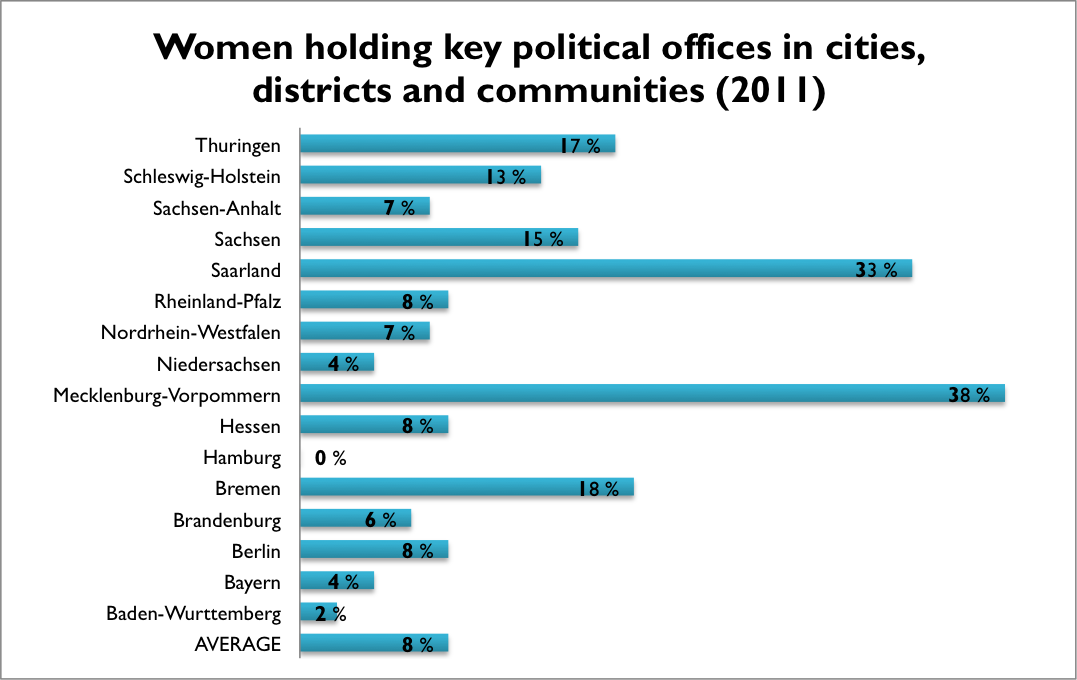 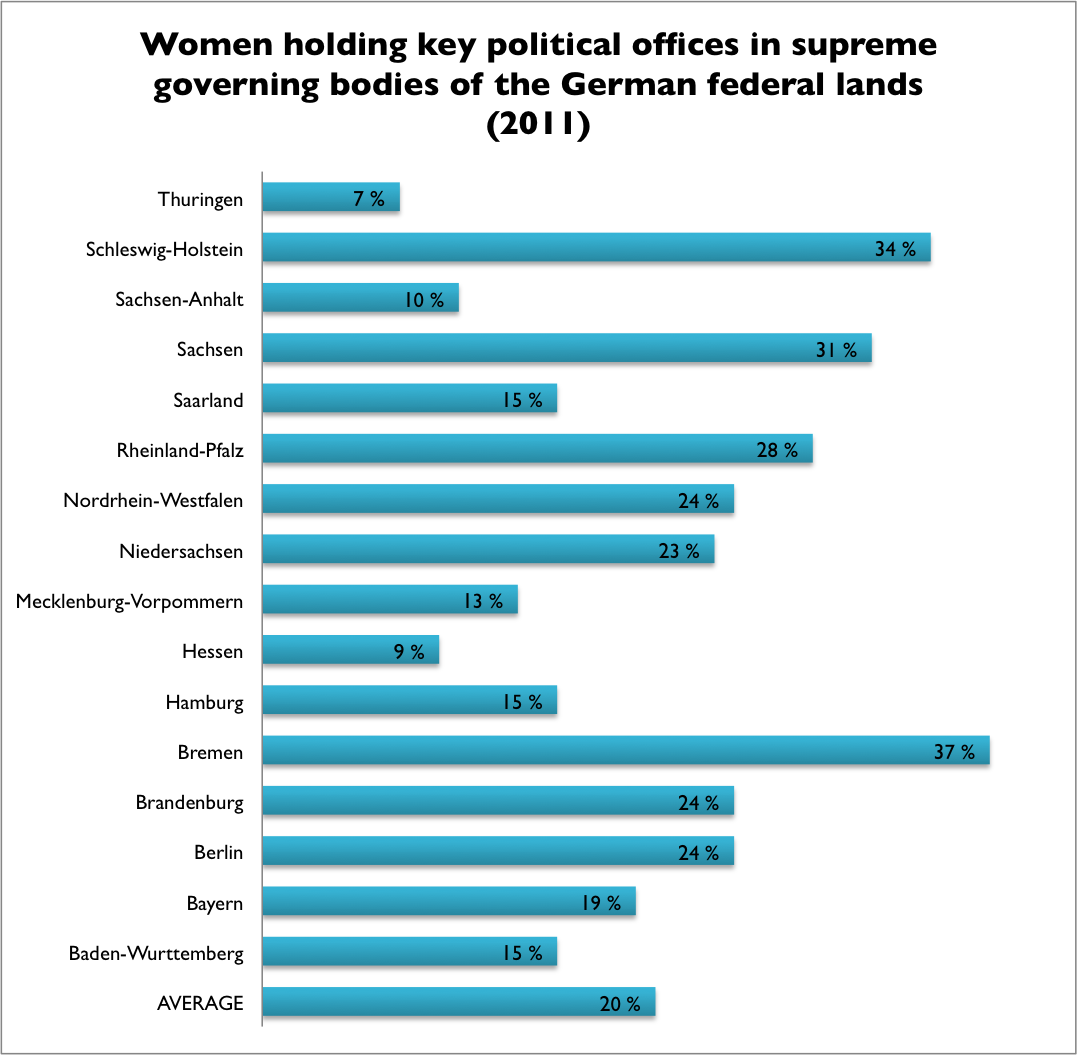 The chart below depicts women's participation in public administration, as well as the women's percentage in decision-making positions in Romania, Croatia, Azerbaijan and Albania.

Modern democracies have long reached a consensus that equal participation of women and men in public administration is one of the foundations of effective state governance. Georgian authorities must set up institutional mechanisms that will overcome all obstacles impeding women in gaining political positions, especially when the number of women in the country is over 50%.

The Council of Europe's Committee of Ministers has developed clear recommendations on the need of women's participation in the local self-government decision-making bodies. The Council of Europe urges the Georgian authorities to create proper conditions so that women "combine family and work life with active political life easier".

According to the 2014-2016 Action Plan of Events for Implementation of Gender Equality Policy in Georgia, the state took an obligation to strive to achieve gender equality at the local self-government level, including increased women's participation in the local authorities, identification of leader women, and their further empowerment. To meet these obligations, it would be preferable for the political parties to nominate women for mayors/gamgebelis or the sakrebulo Chairs.