Why do Mayors resign from office? - საერთაშორისო გამჭვირვალობა - საქართველო

Why do Mayors resign from office? 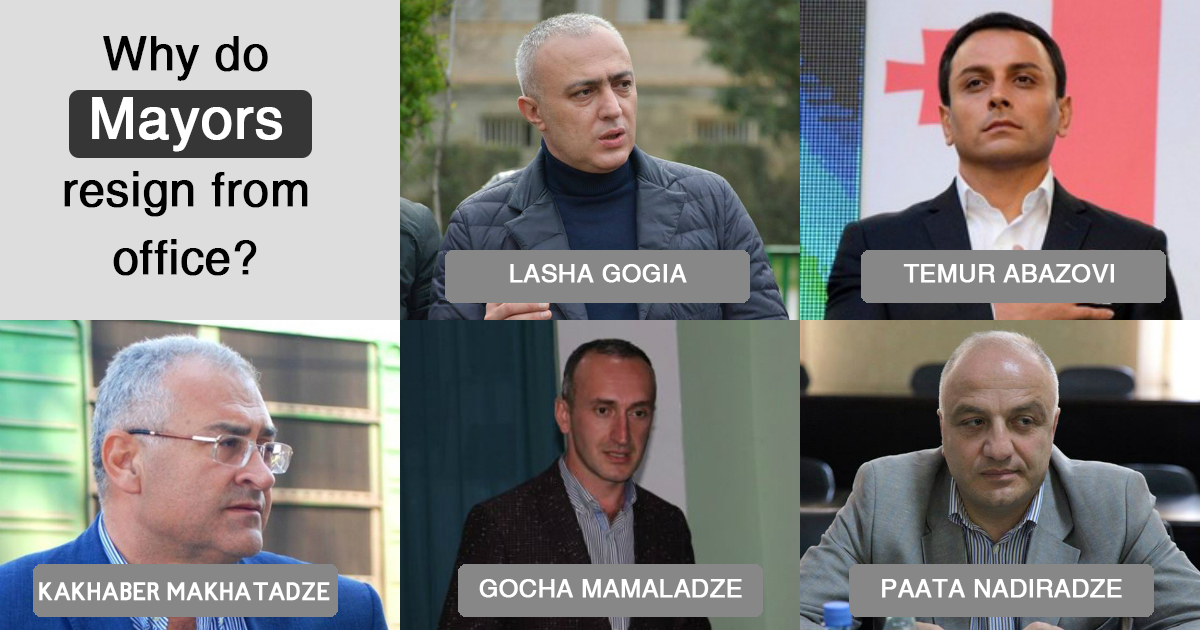 Within a period of a year and a half after the self-government elections of 2017, five municipalities were left without a mayor. After the municipalities of Zugdidi, Marneuli, Chiatura, and Khulo, the Municipality of Zestaponi also works without the highest executive person – on February 12, 2019, Kakhaber Makhatadze resigned from office.

On the same day, the Mayor of Marneuli, Temur Abazov – who had been detained on the charge of the inhuman treatment of a citizen on June 13, 2018, and released on bail after seven months of pre-trial detention in December 2018 – applied to the Town Council with a request to terminate his powers.

The former Mayor of Zugdidi, Lasha Gogia, who was detained on the charges of corruption, also remains under pre-trial detention.

TI Georgia has collected information about the mayors of Zugdidi, Marneuli, Chiatura, Khulo, and Zestaponi.

The elections of new mayors in the said municipalities are likely to be held in May 2019.

The Mayor of Zugdidi, Lasha Gogia, and the Deputy Mayor, Gia Gulordava, resigned from their posts on September 12, 2018, without explaining the causes of their resignation to the public.

However, the resignation was preceded by the State Security Service’s studying the activity of N(N)LE[1] Center for the Management of Botanical Gardens of Zugdidi and interviewing Lasha Gogia on September 11.

On September 13, the Rustavi 2 TV station disseminated a covert recording of a conversation of Zurab Kvirkvia, a businessman living in Russia, with Lasha Gogia and his deputy, Gia Gulordava. The businessman expressed his discontent with the fact that he had not received the municipal property he had been promised through an auction, whereas he had paid the officials tens of thousands of dollars for this purpose. The participants of the conversation also mentioned the then Governor of Samegrelo-Zemo Svaneti, Levan Shonia, who had been replaced by Aleksandre Motserelia two weeks before the dissemination of the recording. The changing of the Governor also coincided with the start of studying the activity of the municipal N(N)LE by the State Security Service.

In spite of the interview with Lasha Gogia, which was conducted as part of the investigation launched on the basis of the disseminated recording, and the doubts regarding corruption, the former Mayor of Zugdidi retained the position of the Chairperson of the District Organization of the Georgian Dream and was actively involved in the activities of the local campaign headquarters of Salome Zurabishvili, a presidential candidate supported by the ruling party.

Lasha Gogia and Gia Gulordava were detained on November 1, after Salome Zurabishvili was defeated in the first round of the elections in Zugdidi: She received 33.9% of the votes in the Zugdidi District, while the candidate of the opposition United National Movement (UNM), Grigol Vashadze, received 49.1% of the votes.

After the detention, the Prosecutor’s Office confirmed the authenticity of the covert audio recording disseminated by Rustavi 2 on the basis of an expert’s report. On December 26, 2018, the former Governor of Samegrelo-Zemo Svaneti, Levan Shonia, was also indicted in the same case, though he was released on bail on December 27.

At a court session held on February 4, 2019, the judge upheld the pre-trial detention of the former Mayor of Zugdidi, his deputy, and other former high-ranking officials of the Zugdidi Municipality detained in this case.

The case against the Mayor of Marneuli, Temur Abazov, is still being considered by the court. The Mayor applied to the municipal council with a request to terminate his powers on February 12, 2019, which was preceded by his detention on June 13, 2018. The Town Council of Marneuli took notice of Abazov’s application on resignation two days after it was filed, on February 14.

The Prosecutor’s Office has charged Abazov with degrading and inhuman treatment of a citizen, committed by a group of persons. The case concerns a video recording disseminated in social network on June 12, 2018, which shows a citizen living in Marneuli being forced to apologize and to smear his face with his own urine because he swore at Temur Abazov and Bidzina Ivanishvili at a protest rally held in support of Zaza Saralidze.

In addition, the Prosecutor’s Office argues that, together with Temur Abazov, the said citizen was also subjected to violence by Ragim Askerov, a member of the UMN; Ramin Alakhverdiev, a member of the Town Council of Marneuli; and a certain E.G. – these individuals were indicated under the article of violence.

The case also involves the majoritarian MP of Marneuli and a member of the UNM, Azer Suleimanov, who was subjected to criminal liability under the article of violence.

Temur Abazov was detained on the day after the dissemination of the recording, and he used the right to remain silent for several months, while on September 6, the Prosecutor’s Office aggravated his charges in connection with the dissemination of materials of the private life of a citizen.

In six months after detention, Temur Abazov’s measure of restraint was changed and he was released on a bail of GEL 10,000.

Paata Nadiradze resigned from the position of the Mayor of Chiatura on September 27, 2018, naming the campaign conducted against him by Sulkhan Makhatadze, the majoritarian MP of Chiatura; Lasha Chkhitunidze, the police chief of the town; and other employees of law enforcement agencies as the reason for his resignation.

The resignation was preceded by a fight in a restaurant whose participants – officials of the Town Hall, Town Council, and police of Chiatura – blamed one another for provoking the confrontation. After the incident, a complaint was filed in the local police division against the Mayor, on the basis of which the Ministry of Internal Affairs launched an investigation under the article of violence, although the results of the investigation have yet to become public.

Paata Nadiradze had been elected as the Mayor of Chiatura by 62.45% of the votes in the local self-government elections of 2017.

On October 17, 2018, 11 days before the presidential elections, the Mayor of Khulo, Gocha Meladze, along with the Deputy Mayor Lasha Bolkvadze, resigned from his position. At the time of resignation, Gocha Meladze was also in charge of the campaign headquarters of Salome Zurabishvili, the presidential candidate supported by the Georgian Dream, in Khulo.

Gocha Meladze resigned from his post soon after the resignation of Zurab Pataridze, the Chairman of the Government of Adjara, while the resignation of Zurab Pataridze was, in its turn, related to the replacement of Giorgi Kvirikashvili by Mamuka Bakhtadze in the position of the Prime Minister. Together with the approval of the new Chairman of the Government of Adjara, Tornike Rizhvadze, the media started to circulate assumptions about the possible replacement of the heads of the region’s municipalities.

Questions were raised by the fact that, according to the official information, on October 17, at the time of resignation from office, Gocha Meladze was on holiday. As was found out later, on this very day Meladze had applied to the Town Council with a request of resignation, though, prior to that, he had appointed the former police chief, Vakhtang Beridze, as his first deputy, who automatically started to fulfill the mayor’s obligations after Gocha Meladze and his deputy left their posts. It should also be noted that Vakhtang Beridze resigned from the position of the chief of the police division of Khulo on the basis of his application on October 16, a day before Gocha Meladze resigned from his position.

Gocha Meladze had been elected as the Mayor of Khulo by 59.58% of the votes in the first round of the local self-government elections of 2017.

The former candidate for the position of the Mayor of Zestaponi, Giorgi Goglichidze, and his supporters had periodically held protest rallies against Kakhaber Makhatadze. They accused the Mayor of corruption and also held sit-ins outside the Mayor’s office on several occasions.

In 2016-2017, the former Mayor of Zestaponi donated GEL 90,000 to the ruling party, including GEL 40,000 donated before the local self-government elections of 2017, in the very first round of which Makhatadze was elected as the Mayor with the 54.7% of the votes.

According to the law, the CEC will have to schedule the mayoral elections in May 2019, as the former mayors’ powers were terminated before February 15. The CEC is to set the date of the extraordinary elections not later than 50 days before the elections by a decree. The powers of the newly elected mayors will last until the fall of 2021.