The number of legal entities established by the Kutaisi City Hall has increased from 20 to 22 in the last three years, which has resulted in a higher number of employees and budgetary allocation for their activities by the municipality.

This is data is incomplete as 1 out of the 22 legal entities established by the Kutaisi City Hall, the “Kutaisi Lift”, did not provide the requested public information. Moreover, according to the information that we received, two LLCs, "Ukimerioni" and "Gumati Medical Ambulatory", are no longer operational, and LLC "Parkservisi", LLC “Kutaisi Preventive Disinfection Station”, LLC “Kutaisi N4 Mixed Clinic” and LLC "Georgian Traditions 2011" are not subsidized from the budget. LLC “Parkingservice” received GEL 300,000 from the budget in 2015 and subsequently did not receive direct subsidies from the local budget, although the City Hall is not fully paying for the lease for “Parkservisi”. As of December 2018, this debt amounted to more than GEL 1,240,000, and according to the information provided by the City Hall, there is an ongoing process of deferring the accumulated debt.

Therefore, the information obtained by Transparency International Georgia concerns only 15 legal entities - the municipal organizations that have provided the requested information and are financed by the local budget.

Number of employees and remuneration in municipal legal entities:

According to the information provided by the Kutaisi City Hall, the municipal LLCs that are funded from the 2019 local budget are the LLC “Ramaz Shengelia Stadium”, LLC “Basketball Club Kutaisi 2010” and LLC “Football Club Kutaisi Martve”.

Of the municipal LLCs that provided us with information, the largest employer was the LLC “Kutaisi Football Club Martve” with a total of 30 employees. LLC “Basketball Club Kutaisi 2010” spends the most on remuneration. 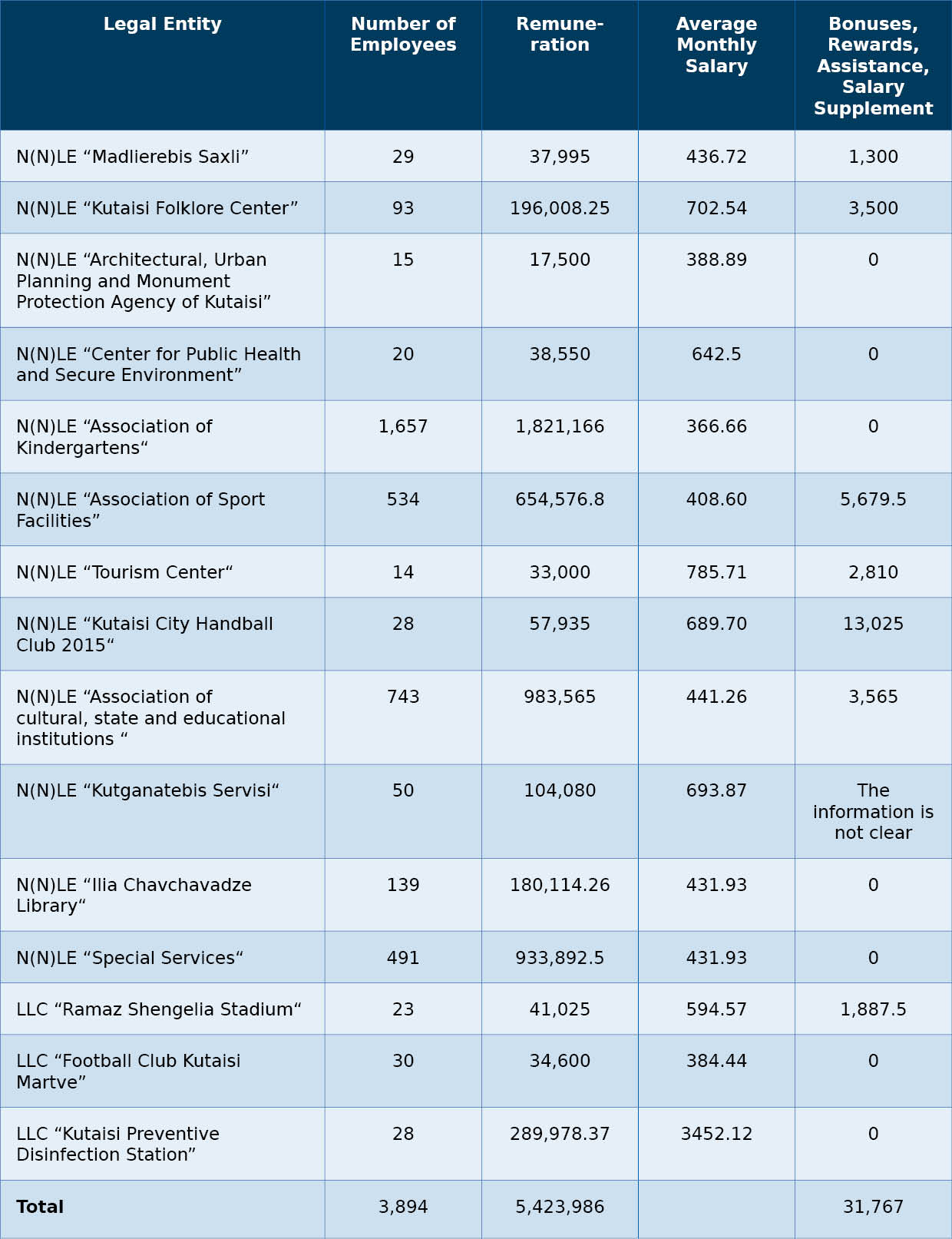 Business trips, mobile costs and representation expenses incurred by legal entities from January 2017 to March 2019 are as follows:

On the one hand, the Georgian government has expressed an initiative for a small-scale government, which implies the reduction of the number of state bureaucracy. On the other hand, there is an increase in the number of N(N)LEs, state-owned LLCs and those employed in them.

Unlike the procedure of appointment of public servants, employment in N(N)LEs does not require the announcement of a competition. Accordingly, both the City Hall – when appointing heads of N(N)LEs – and the heads of N(N)LEs practically make recruitment-related decisions unilaterally, which does not make it possible to select specialists with higher qualifications for vacant positions in an environment of free competition.

Although the municipality spends 23 million GEL on the management of legal entities, it is failing to resolve problems related to public transport, social issues, and other municipal problems.

According to Transparency International Georgia, the Kutaisi City Hall, in parallel to the preparation of the draft Budget of 2020, should take the following steps: