The pandemic that started in 2020 had a huge impact on the state budget. In 2020, the country had an anti-crisis budget, which was reflected in taking the debt of up to GEL 7 billion. The 2021 budget was initially planned with the impact of the pandemic in mind, as it was clear at the end of last year that 2021 would also be a difficult year. However, it is very difficult to accurately predict the impact of the pandemic on the economy. Therefore, in July, the Government of Georgia (GoG) made amendments to the 2021 budget and brought it closer to the real economic picture.

Implementation of the state budget according to a plan is a precondition for reducing macroeconomic risks and achieving the set goals effectively. Transparency International Georgia studied the basic features of the six-month performance report of the 2021 state budget and presented specific recommendations for remaining challenges. We believe, taking these recommendations into account will make a budgetary policy more sustainable and effective.

The GoG forecasted a 4.3% economic growth for 2021. However, in January-June, the Georgian economy grew by 12.7%, compared to 2020, and the GoG increased its annual economic growth forecast to 7.7%. The more-than-expected growth in the economy was likely due to fast-growing exports, a partial recovery in tourism, and the lifting of regulations on business imposed due to the pandemic.

In the first half of the year, as the economy grew faster than expected, the state budget received more Receipts than planned. The 6-month Receipts plan was GEL 9,059 million, while in fact, the budget received 3.5% more, GEL 9,380 million.

The 6-month plan for Grants was fulfilled by 121.3%. In particular, the budget received GEL 44 million more than planned and it totaled GEL 249 million, of which GEL 214 million was foreign grants and GEL 35 million was revenue from central government LEPLs[2] and N(N)LEs[3].

Completion of the Other Revenues plan by 144% had the most significant contribution to the excessive fulfillment of the Budget Receipts plan. The state budget received GEL 98 million more in interest and dividends than planned.

The 6-month plan for the Disposal of Non-Financial Assets (privatization) was fulfilled by 177% and the state budget received GEL 95 million instead of GEL 54 million. Excessive performance was caused by the increase in the number of privatization objects.

The 6-month plan for the Decrease of Financial Assets (returned loans) was fulfilled by 109% and loans of GEL 61 were repaid.

Budget Receipts also include government borrowing. The GoG borrowed GEL 3.531 million in the first half of the year, which is GEL 100 million more than planned. 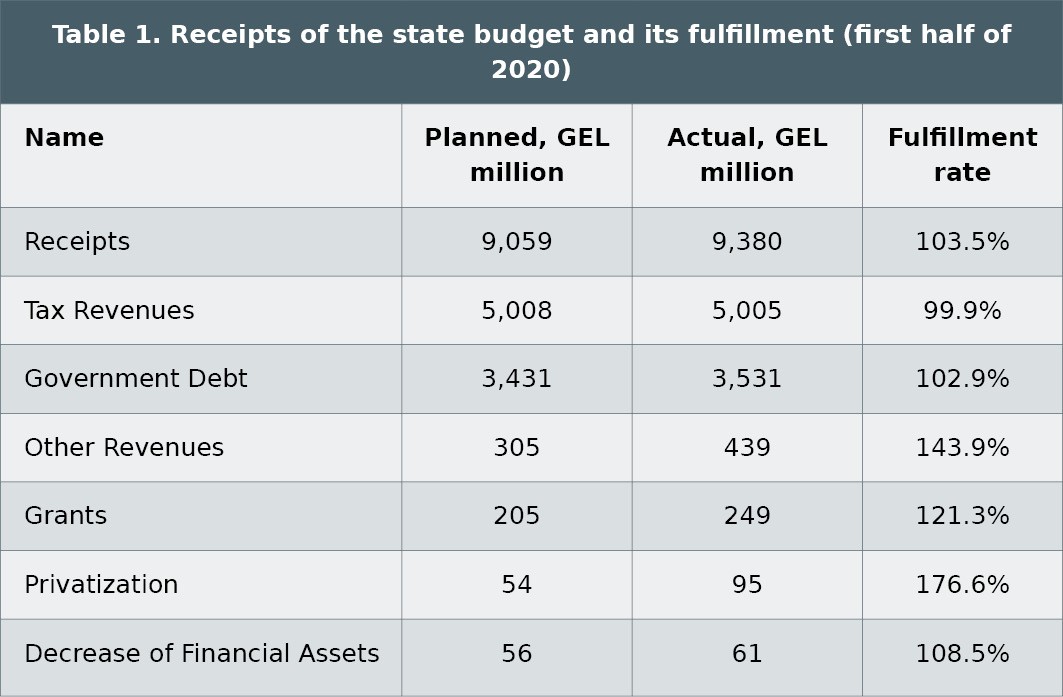 According to the amendments to the state budget made in July 2021, the forecast of annual budget Receipts increased by GEL 1.2 billion and amounted to GEL 18 billion.

In 2021, the 6-month plan of state budget Expenditures was fulfilled by 96% and more than GEL 10 billion was spent.

The 6-month plan of the Expenses - the largest item of the Expenditures - was fulfilled by 96.1% and amounted to GEL 6.5 billion. The plan for the Procurement of Goods and Services was fulfilled with the lowest rate - 86.5%.

It is interesting to see a breakdown in the Procurement of Goods and Services, as these are the costs that the pandemic would have had a significant impact on if the government had saved on administrative costs. In the 6 months of 2021, compared to the 6 months of 2020, the costs of goods and services increased by 21.4% and amounted to GEL 758 million. Compared to the first half of 2019, they have increased by 24%.

The increase in Procurement of Goods and Services was mostly – GEL 58 million due to the increase in the COVID-19 related medical expenses. After medical expenses, Remuneration of Non-staff Contractor Workers is increased. In January-June 2021, GEL 153.2 million was spent on the remuneration of such employees, which is GEL 27.3 million (22%) more than in the same period of 2020, and GEL 47.7 million (45%) more than in 2019.

In the 6 months of 2021, GEL 28.4 million was spent on Business Trips, which is GEL 2 million more than in the same period of 2020. This is also due to the fact that in the first half of last year, the countries were closed due to the pandemic and international business trips were reduced to a minimum. However, the cost of business trips in 2021 is GEL 11 million less than in the same period of 2019. 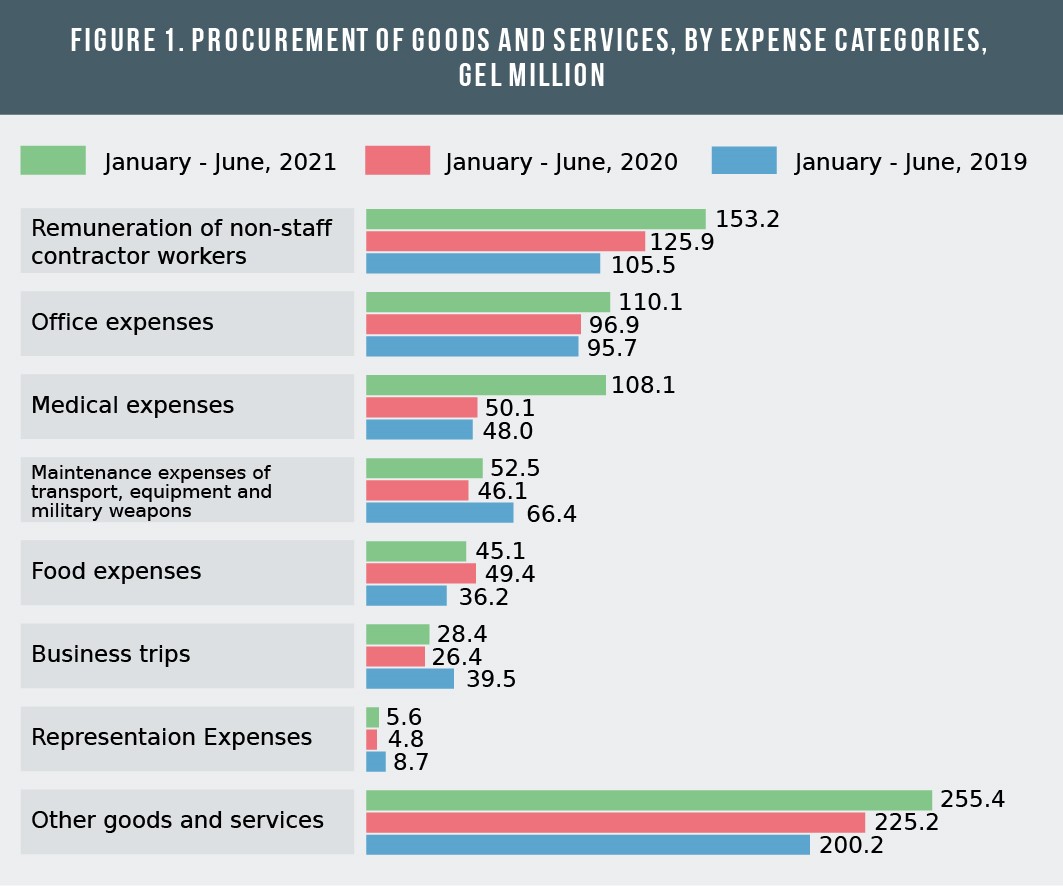 The highest performance rate among the items of the Expenses was observed in Social Security - 99.7%. The Social Security expenses also include Healthcare costs, the programs of which were performed at a high rate, for example, the Universal Health Care Program was 100% fulfilled.

The 6-month plan of another important component of the Budget Expenditures - the Acquisition of Non-Financial Assets (also known as Capital / Infrastructure Expenses), was fulfilled by 96.3%. More than GEL one billion was spent on it. Compared to the Capital Expenses for the 6 months of 2020, 30% more was spent in this regard in 2021.

The 6-month plan for the Increase of Financial Assets was fulfilled by 97% and the GoG loaned GEL 204 million.

The last category of Expenditures is the Reduction of Liabilities that covers state liabilities coming from the loans taken in previous years. The debt of GEL 2.2 billion was repaid in 6 months, which is 99.4% of the 6-month plan. 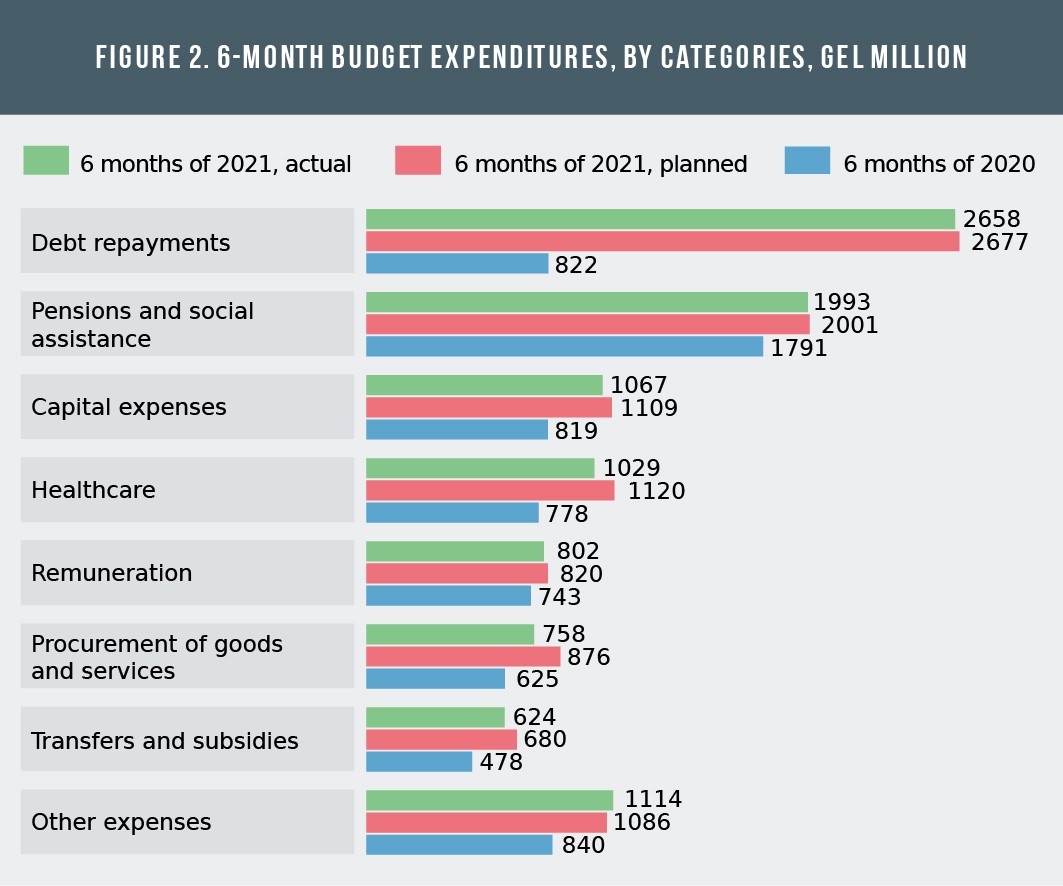 According to the amendments to the state budget made in July 2021, the forecast of annual budget Expenditures increased by GEL 1.1 billion and amounted to GEL 19.5 billion.

GEL 2,489 million of the budget deficit[5] was planned for the first half of the year while the actual deficit was GEL 1,957 million. The reduction of the deficit was conditioned by the excessive performance of the Receipts plan and lower Expenditures than planned. The annual (12-month) budget deficit for 2021 is projected at GEL 4 billion.

As of December 31, 2020, the debt of the GoG was GEL 29.7 billion, which is 60.1% of the last year's GDP. As of June 30, 2021, the government debt amounted to GEL 29.6 billion, which is about 55% of GDP for the last year. At the end of 2020, the government's foreign debt was $ 7.2 billion - approximately GEL 23.5 billion at the USD-GEL exchange rate of 3.28. On June 30 this year, the foreign debt was $ 7.5 billion, therefore, in 6 months it increased by $ 300 million. However, due to the appreciation of GEL and the reduction of the government's domestic debt by GEL 418 million, the government debt denominated in GEL eventually decreased by GEL 70 million. The reduction of the debt burden to GDP was conditioned by the 12.7% economic growth recorded in January-June. 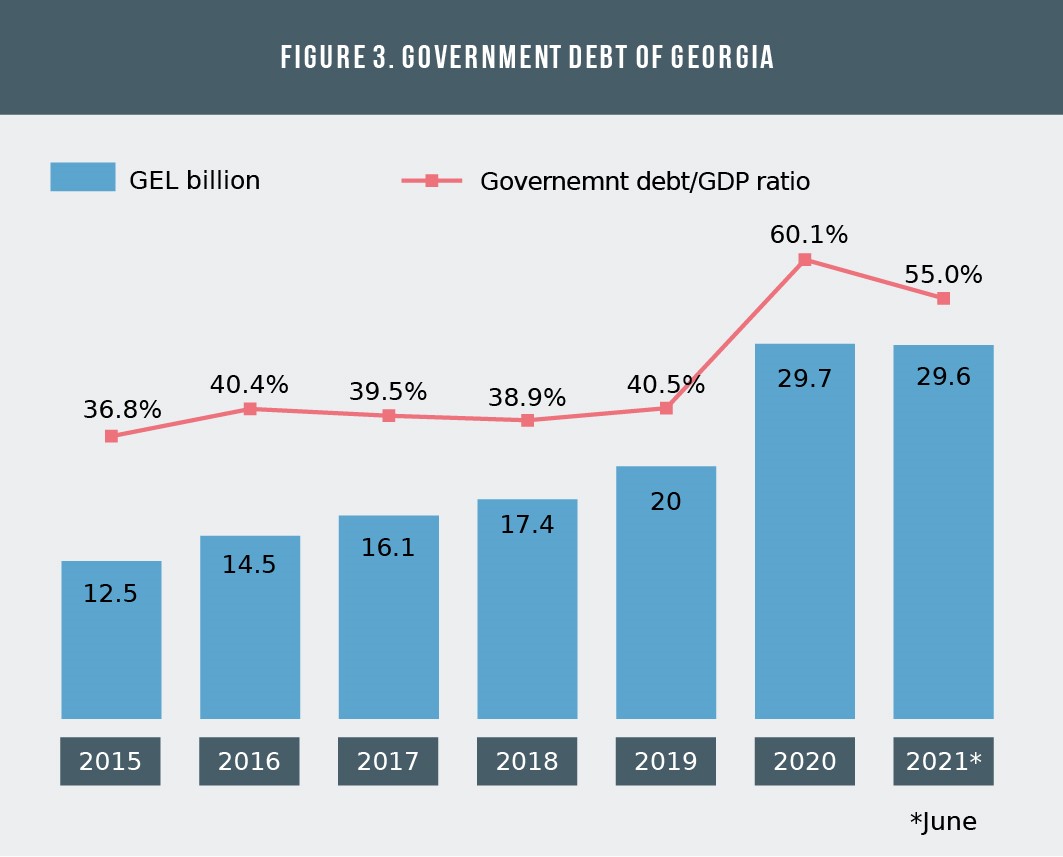 According to the amendments to the state budget made in July 2021, the government will borrow GEL 154 million less. Reducing debt and accelerating economic growth have reduced the annual budget deficit-to-GDP ratio from 7.7% to 6.9%, but the deficit remains above the ceiling set by the Economic Freedom Act (3%) and must be returned to the allowed figure within the next two years.

The damage caused by the pandemic led to the creation of new spending programs in the state budget. Programs were created in 3 areas: healthcare, social assistance and business subsidies. In the first half of 2021, GEL 921 million was allocated for programs linked with COVID-19 of which GEL 822 million (89.3% of the planned amount) was actually spent.

A total of GEL 36 million was spent on business subsidies and the plan was fulfilled by 96%. 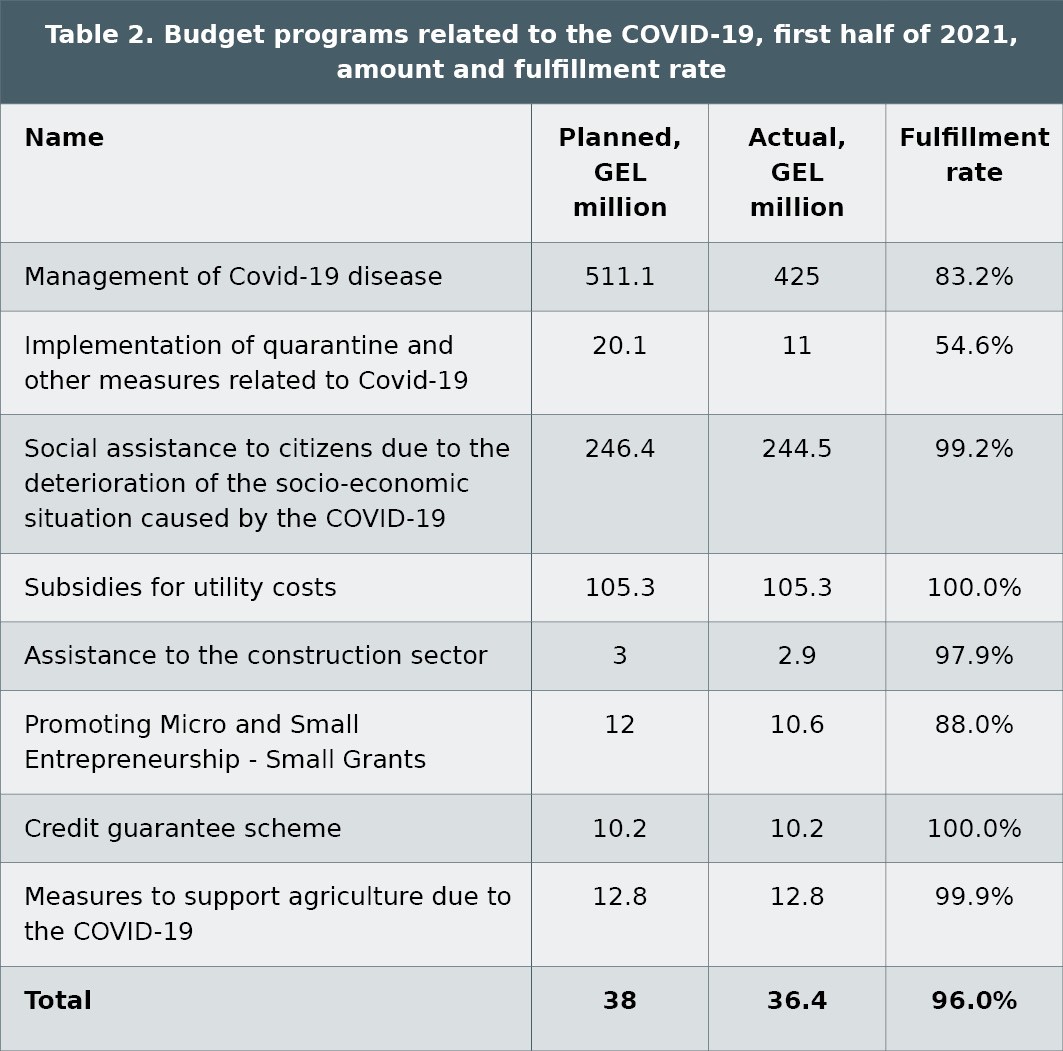 VII. Public institutions and programs with the lowest fulfillment rates

Ten public institutions spent less than 80% of the 6-month plan. The High Council of Justice was the worst performer in this regard, which could spend only 60.9% of its plan. Then comes the LEPL - National Competition Agency - with 63.5% fulfillment rate and the Chamber of Commerce and Industry - with a 65% fulfillment rate.

Among the agencies with large budgets, the Central Election Commission spent the smallest amount compared to the 6-month plan - 66.8% (GEL 13 million). 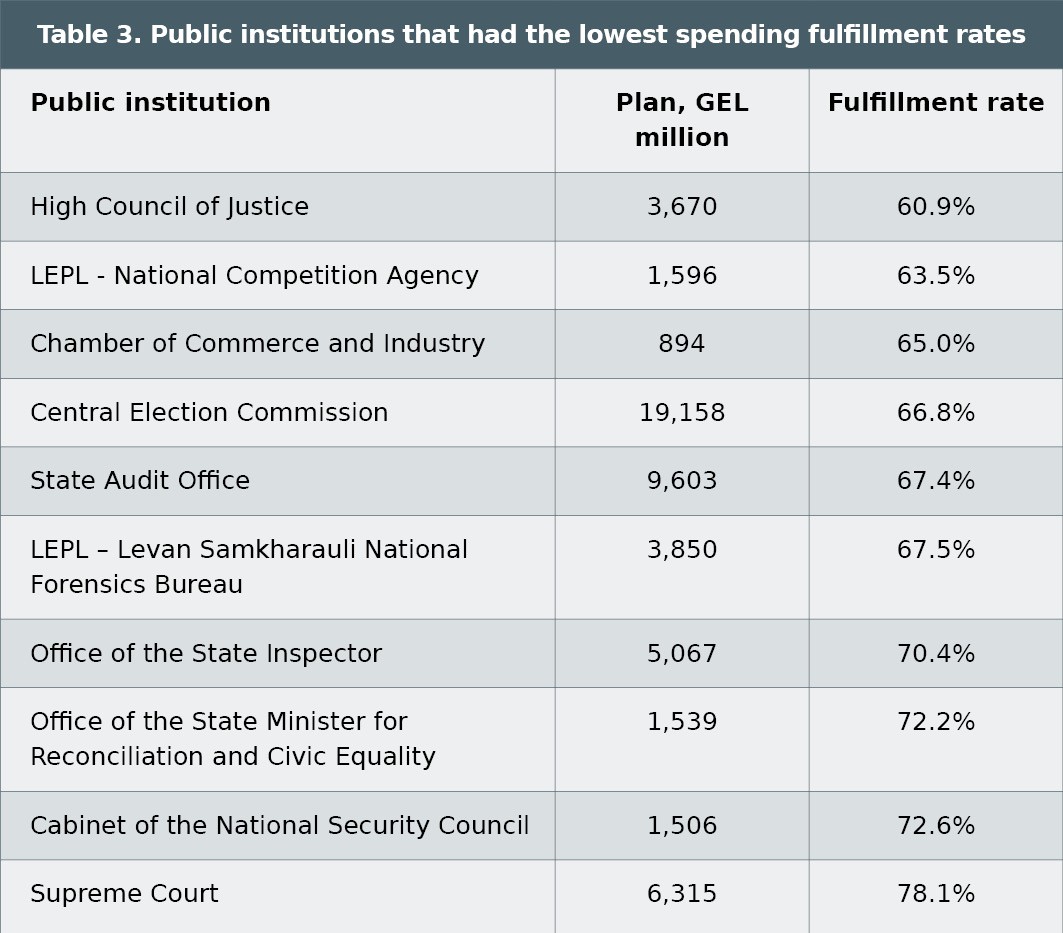 Table 4 shows the programs and sub-programs for which the 6-month plans were implemented with less than 60%.[7] The plans were completed by 0% or the money was not spent at all on 4 subprograms, namely: Construction of Ksani-Stepantsminda Electric Power Transmission Line, Strengthening the Infrastructure of Guria Electric Power Transmission Lines, Support for Investment and Infrastructure Projects in Culture, and Batumi Bus Project. Among these programs, the Batumi Bus Project is the largest (valued at Gel 8.8 million), which is funded by the European Bank for Reconstruction and Development (EBRD).

The Ministry of Foreign Affairs' 6-month plan for the Diaspora Policy Program was fulfilled by 1.9%, with up to GEL 2 million allocated. Also, the Ministry of Justice had a very low fulfillment rate - 4.6% of the Improving the Infrastructure of the Penitentiary System Program, for which GEL 6.5 million was allocated in the first half of the year. 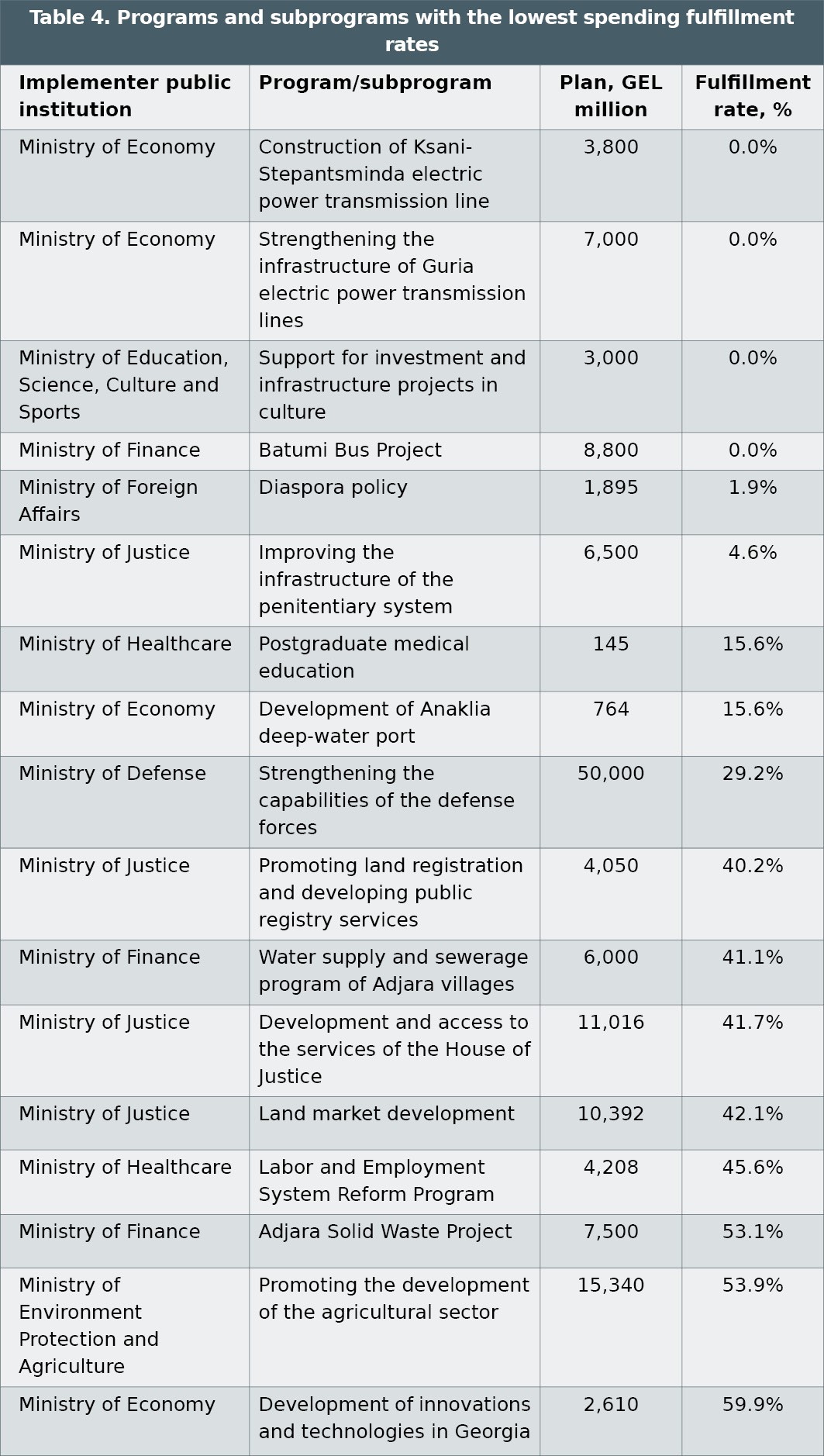 *The first version of the study, published on September 9, incorrectly provided some data on budget expenses on Goods and Services, which were corrected on September 10.

[5] According to the Georgian legislation, the budget deficit is a gross negative budgetary balance. Since the gross balance does not fully include revenues and expenses, the definition of the budget deficit used in this report includes the change of liabilities or sum of lacking money, which was financed by taking new loans.

[6] The government's debt forecast envisages GEL exchange rate of 3.24 against the dollar.

[7] The table does not include pandemic-related programs as we have already discussed them.