Risks of corruption in non-competitive procurements of the Kobuleti Municipality

The works of the second phase of arrangement of a seaside park in the coastline of Kobuleti will be performed by Georgian Stone LLC. The Kobuleti City Hall concluded the contract with the company on March 18, 2020. The tendering commission of the electronic tender without an auction rejected an offer submitted by Award LLC, and the company was excluded from the tender with disqualification. The commission gave priority to Georgian Stone LLC, whose bid – GEL 4,637,636 – was a little less than the estimated value of the tender (GEL 4,773,769).

Georgian Stone, whose director, Badri Romanadze, is the former head of the Architecture Service of the Kobuleti Municipality, is one of the main suppliers of the infrastructure works announced by the same municipality. It was also this company that performed the works of the first phase of arrangement of the seaside park in the Kobuleti coastline (worth GEL 2,770,077) in 2019.

The analysis of the information of the State Procurement Agency shows that the Kobuleti City Hall is presumably tailoring the terms of tenders to the interests of Georgian Stone, which should become an object of an inquiry by the Anti-Corruption Agency. It is noteworthy that the company also won procurement contracts for LEPL Batumi Boulevard by means of disqualification of competing companies.

The director of Georgian Stone is Badri Romanadze. He served as the head of the Architecture Service of the Kobuleti City Hall in 2011-2014. Before Badri Romanadze was appointed as the director of the company, Georgian Stone had only won one tender (announced by the Batumi City Hall) in 2013. The company received up to GEL 18,000 for the works performed.

It was after Romanadze left the civil service and was appointed as the company’s director that Georgian Stone started winning contracts of public procurements announced by the Kobuleti Municipality. According to the data of the State Procurement Agency, from 2015 up to 2019, Georgian Stone won 27 tenders announced by the Kobuleti Municipality; in addition, it obtained one simplified procurement contract (worth GEL 755,374) and received GEL 18,809,434 in total, more than 38% of which was received though non-competitive tenders and direct procurements. It is noteworthy that the Georgian Stone took part in 7 tenders with a total value of GEL 6,184,705 without competition, and it won 5 tenders by means of disqualification of competing companies.

In total, in the past six years, Georgian Stone received GEL 27,031,328 from procuring organizations for the supply of construction materials and performance of various infrastructure works. The company received 70% (GEL 18,809,434) of this amount from the Kobuleti Municipality. 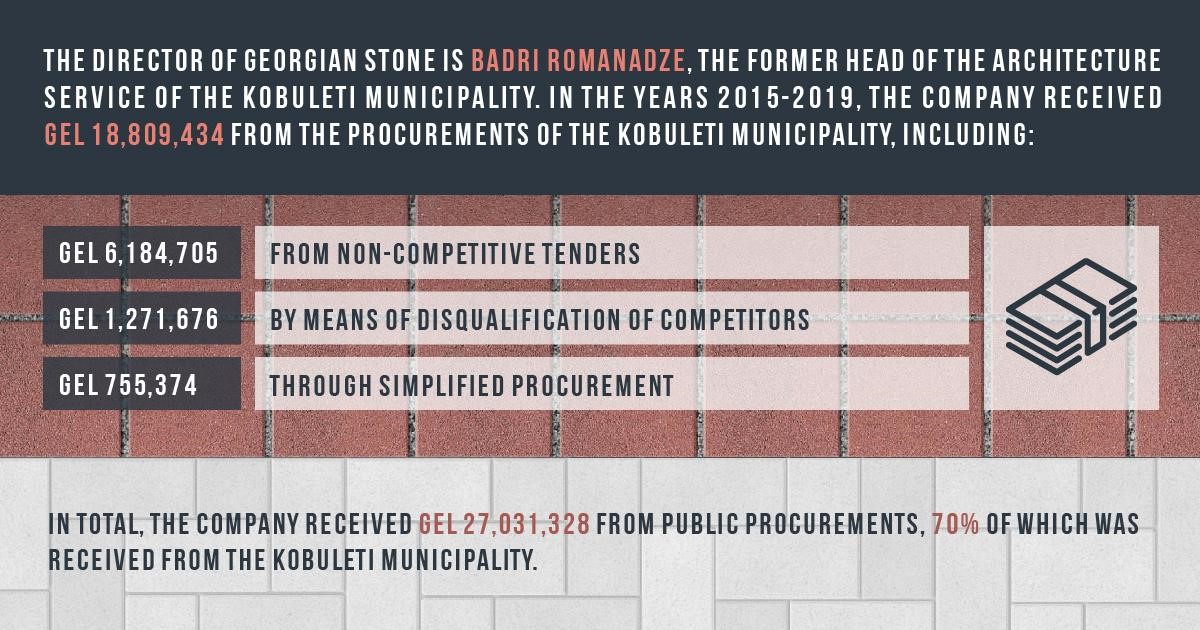 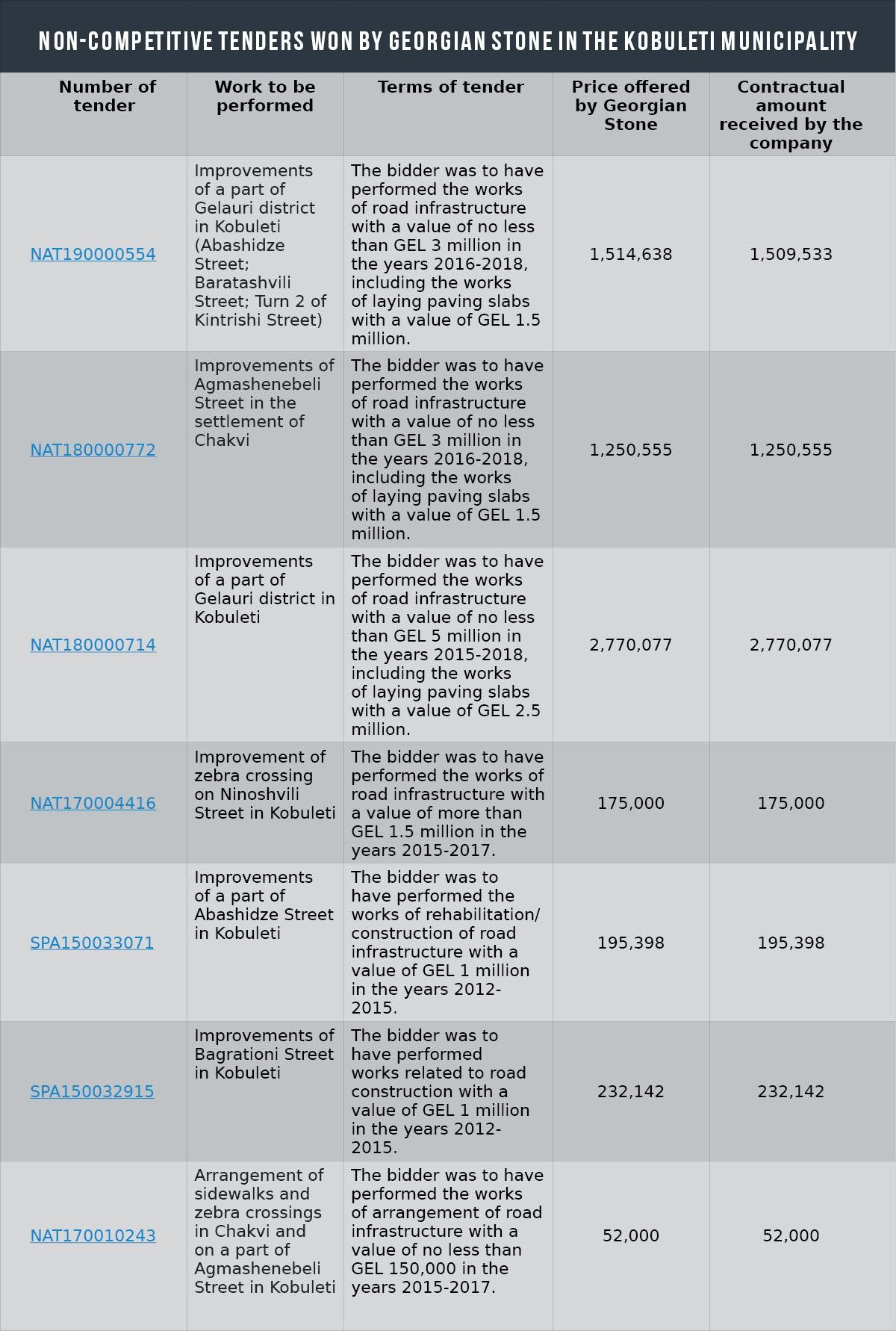 We should pay attention to the terms of the first three procurements in the table: In 2 cases, the company taking part in the tender was to have the experience of laying decorative paving slabs with a value of GEL 1.5 million, and in 1 case – with a value of GEL 2.5 million. The only participant in the tenders, Georgian Stone, is a subsidiary of Legi, an enterprise producing decorative paving slabs and other materials for infrastructure works, which puts it in a privileged position in terms of availability of construction products. Adding this point to the terms limited other potential bidders’ chances of participation in the tender.

In addition, the table shows that in 6 out of 7 cases the Kobuleti Municipality concluded the contract with the supplier with the price offered by Georgian Stone, which took part in the tender without competition.

Assets that companies connected with Georgian Stone received from the government 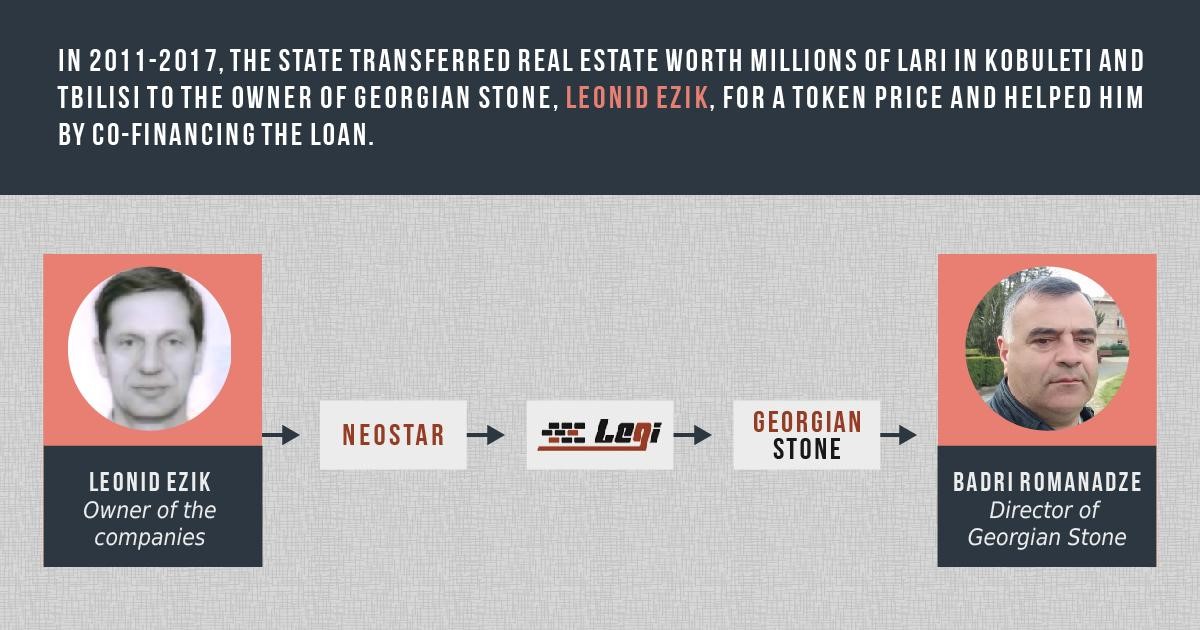 On January 24, 2017, by Decree No. 88, the Government of Georgia transferred a non-agricultural land plot with an area of 97,470 sq. meters and buildings/structures situated on it to Neostar for GEL 1, as part of the state program Produce in Georgia. The company took an obligation to open an enterprise producing construction materials and to invest GEL 3,508,920 in the project. In September of the same year, the company put up the land plot it had received from the state for a token price for mortgage, and the state provided it with financial assistance for two years as part of the Produce in Georgia program so that the company would cover the bank loan.

This is not the only piece of property that companies owned by Leonid Ezik have received. On July 18, 2011, Legi LLC received a land plot with an area of 32,382 sq. meters in the Kobuleti Municipality from the Government of Adjara, also for GEL 1. In return for the direct sale of the land plot for a token price, the company took an obligation to invest GEL 1 million and build a concrete production factory.

Legi also takes part in public tenders: since 2011, the company has mainly won tenders announced by legal persons related to the municipalities of Kobuleti and Batumi; in total, it has received more than GEL 250,000 from tenders and simplified procurements.

Participation of Georgian Stone in the procurements of Batumi Boulevard

Georgian Stone LLC also took part in the procurements announced by LEPL Batumi Boulevard for laying of paving slabs and walkways and performance of other infrastructure works. The company started to take part in such tenders from February 2015. The administration of the boulevard announced 10 such tenders in total in the past five years, 2 of which ended without a result, 3 were won by another company, and 5 by Georgian Stone. It is noteworthy that in 4 of the 5 tenders the company won by means of disqualification of competing limited liability companies, while in 1 tender it won because it had offered a lower price. For example, in the tender announced on February 27, 2017 (NAT170001975), in which 3 companies and 1 physical person took part, the tendering commission rejected all the participants except Georgian Stone for various reasons and gave priority to this company despite the fact that it had offered the highest price.

TI Georgia calls upon the Anti-Corruption Agency of the State Security Service to start an inquiry, in a timely manner, in connection with those public tenders announced in recent years by the municipalities of Kobuleti and Batumi which were won by Georgian Stone without competition or by means of disqualification of other participants of tenders. Such a policy with regard to tenders contains risks of corruption, if we also consider that the director of the company, Badri Romanadze, was an officeholder in the Kobuleti Municipality for years.