The Public Broadcaster started the TV season with partially renewed programming, with viewers being able to see new social-political, cultural and entertainment programs. The management of the channel determined the priorities of reorganization on the basis of public opinion polls as part of which 3,000 people were surveyed across Georgia. The channel also developed a long-term plan for the TV station’s development.

Changes were also made in the broadcaster’s management. Sergi Gvarjaladze, the host of the Komunikatori program, replaced Goga Chartolani in the position of the Deputy Director General for Broadcasting. The changes also touched the News Service – political scientist Giorgi Gvimradze was appointed the Head of the News Department, while journalist Giorgi Putkaradze took the position of the Head of the News Service on January 4, 2016.

The ratings of Channel 1 and Channel 2 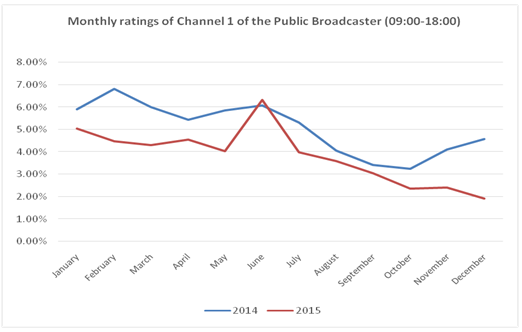 The evening programs of Channel 1 are not very popular either. In this case too, a particularly big decrease of the rating, which had already been low, took place after the start of the 2015 TV season. The highest rating in the past two years was observed in June 2014 when the Public Broadcaster was exclusively airing the world championship in football. 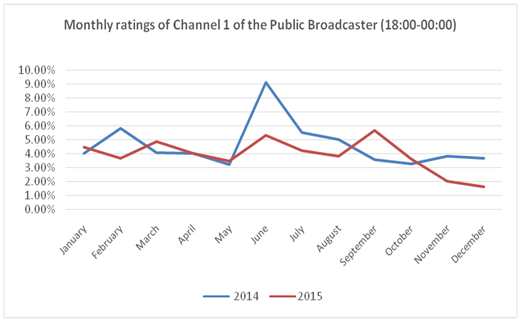 The main newscast of the channel, Moambe, reveals a similar trend. From the second half of 2015, the rating of the program dropped significantly, and at the end of the year, it halved compared with the same period of the previous year. 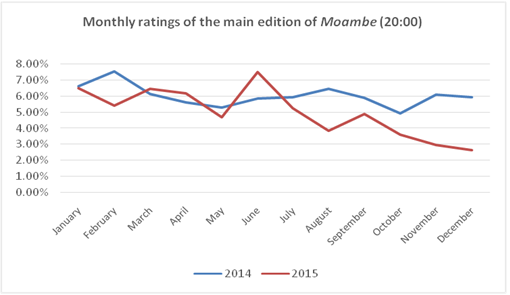 Channel 2 of the Public Broadcaster has an even lower rating. During the past two years, the channel’s rating has not been higher than 2%; accordingly, its impact on social and political life is minimal.

Against the background of the deteriorated ratings, the Public Broadcaster’s budget for 2016 has increased from GEL 40.8 million to GEL 44.1 million.