In comparison to 2015-2016, the practice of using citizen engagement mechanisms in the municipalities of Adjara has improved in 2017-2019. Nevertheless, local governments need to work on improving the quality of citizen engagement.

Transparency International Georgia has requested information from the city halls and Sakrebulos of Batumi, Khulo, Keda, Shuakhevi, Kobuleti and Khelvachauri municipalities to determine to what extent the existing legislation supports citizen engagement, whether municipal authorities make use of the opportunities provided by the legislation and with what issues the citizens address the local self-government.

Similar research was published by our organization on the municipalities of Adjara in 2017, in which identical data from 2015-2016 was analysed.

The study found the following:

Use of citizen engagement mechanisms in the Municipalities of Adjara from January 2017 to August 2019: 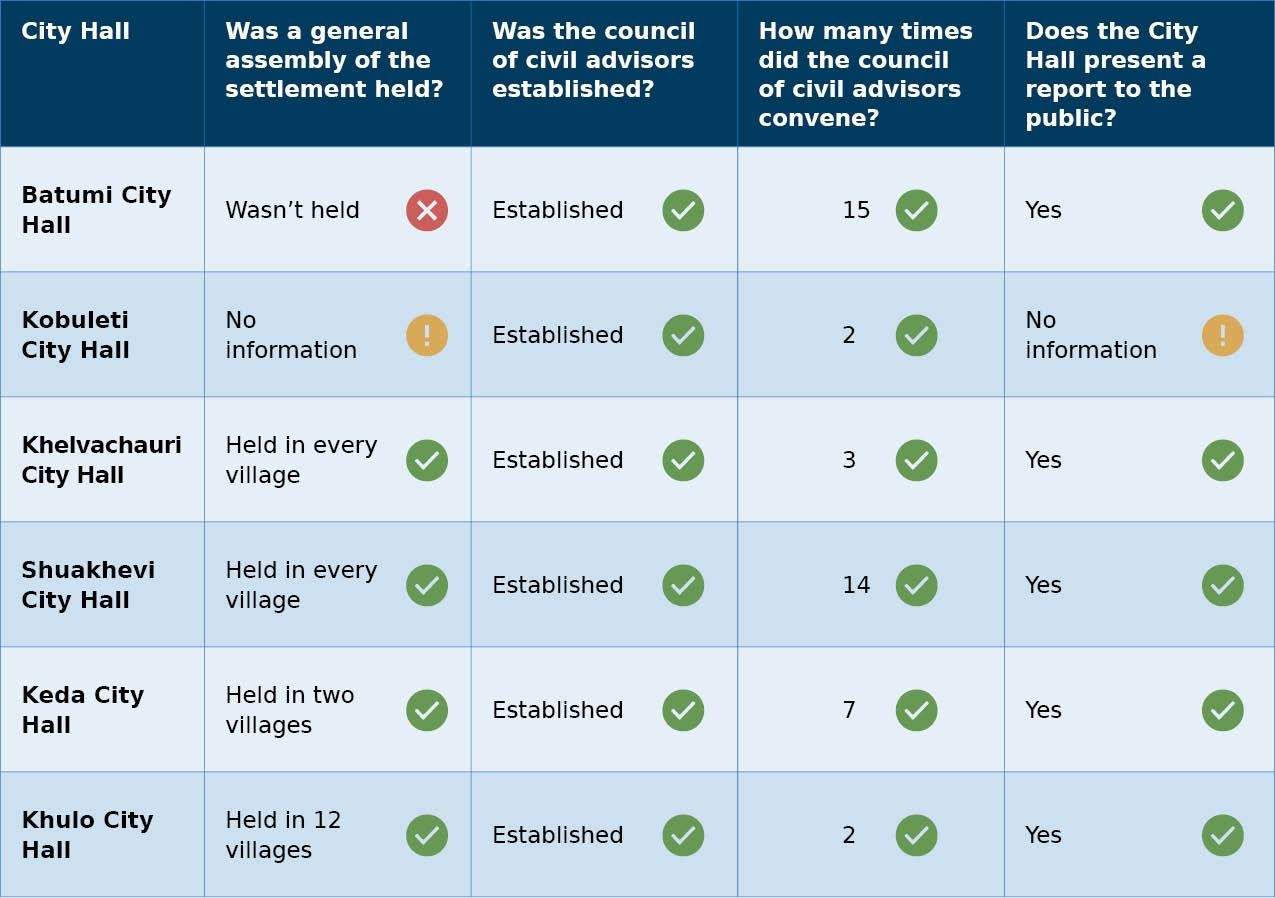 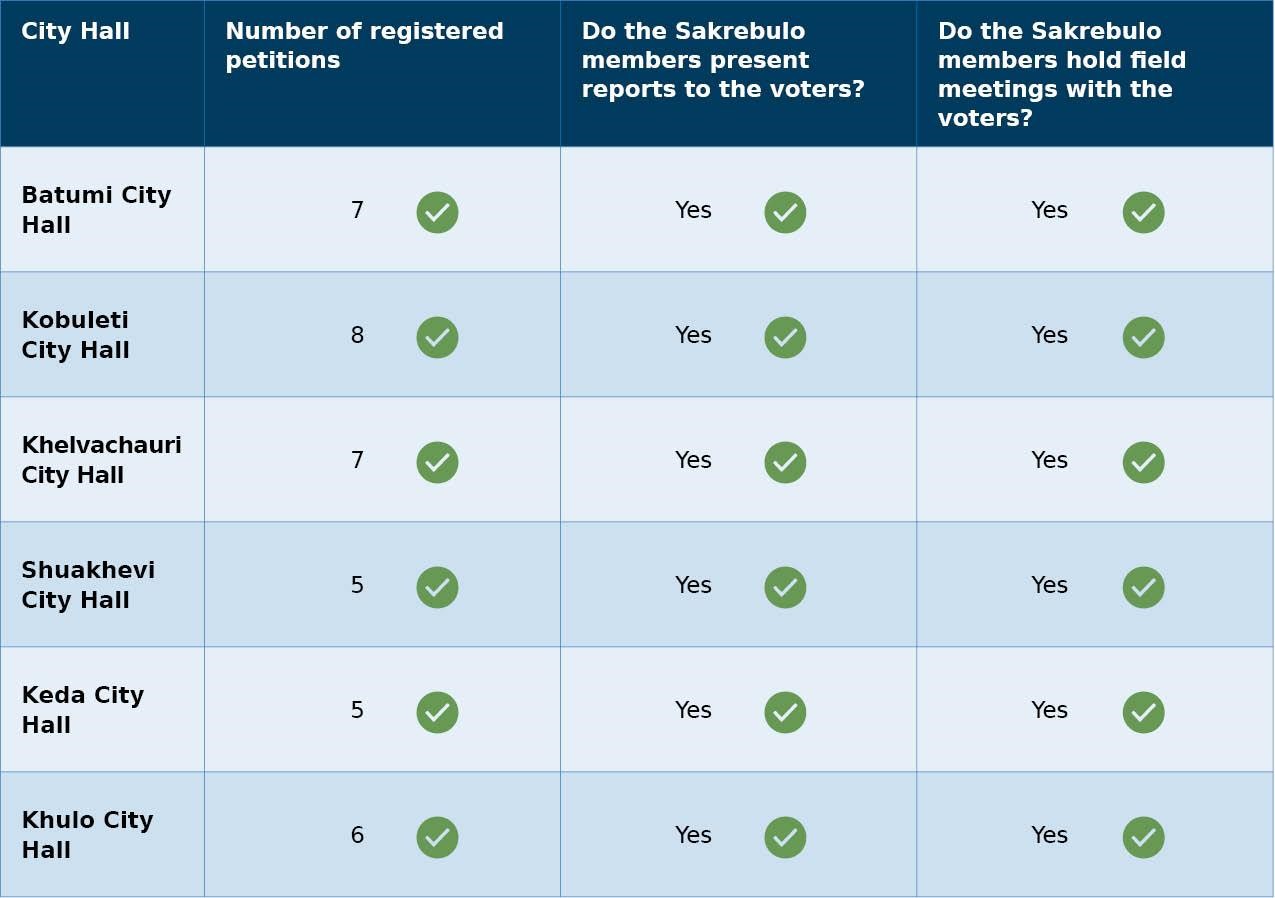 General Assembly of a Settlement

According to Article 852 of the Local Self-Government Code, one of the main mechanisms of citizen involvement in local government is the general assembly of a settlement.

A General Assembly of a settlement is a form of citizen participation in the self-organization of the population of a village / small town / city, and in the exercise of local self-government that ensures active engagement of the constituents registered in the relevant settlement in the discussion and solution of those issues that are important to that settlement and municipality, and in the process of initiation of the above issues before the municipal bodies.

As in 2015-2016, from January 2017 until August 2019, there were no general assemblies in the Batumi municipality, while the Kobuleti municipality did not provide us with this information.

In order to identify priority projects implemented under the Rural Support Program, a general assembly was held in all villages and communities of Shuakhevi and Khelvachauri municipalities in 2018-2019, which is a positive development, as the Shuakhevi municipality convened only once in 2015-2016.

During the reporting period, a general assembly was held in 12 villages of the Khulo municipality. Out of the 6 villages, the rural support program was discussed in 6 villages, while the rural infrastructure needs were discussed in the remaining 6 villages.

In the Keda municipality, the general assembly was held twice in the villages of Zendidi and Mosiashvilebi.

Petition is a form of citizen engagement in the exercise of local self-government.

A petition can be filed by at least 1 % of the constituents registered in the territory of the municipality and the General Assembly.

It is important to note that the electronic petition system was implemented in the Keda, Kobuleti, Khelvachauri and Batumi municipalities. At the same time, the Batumi City Council lowered the 1% margin and granted the right to petition to 0.5% of voters, which is likely to have a positive effect on the degree of citizen involvement and the increase in the number of petitions.

However, it is noteworthy that 7 petitions were registered in the Batumi Municipal Assembly during the reporting period, which is twice less than the number of petitions received in 2015-2017. 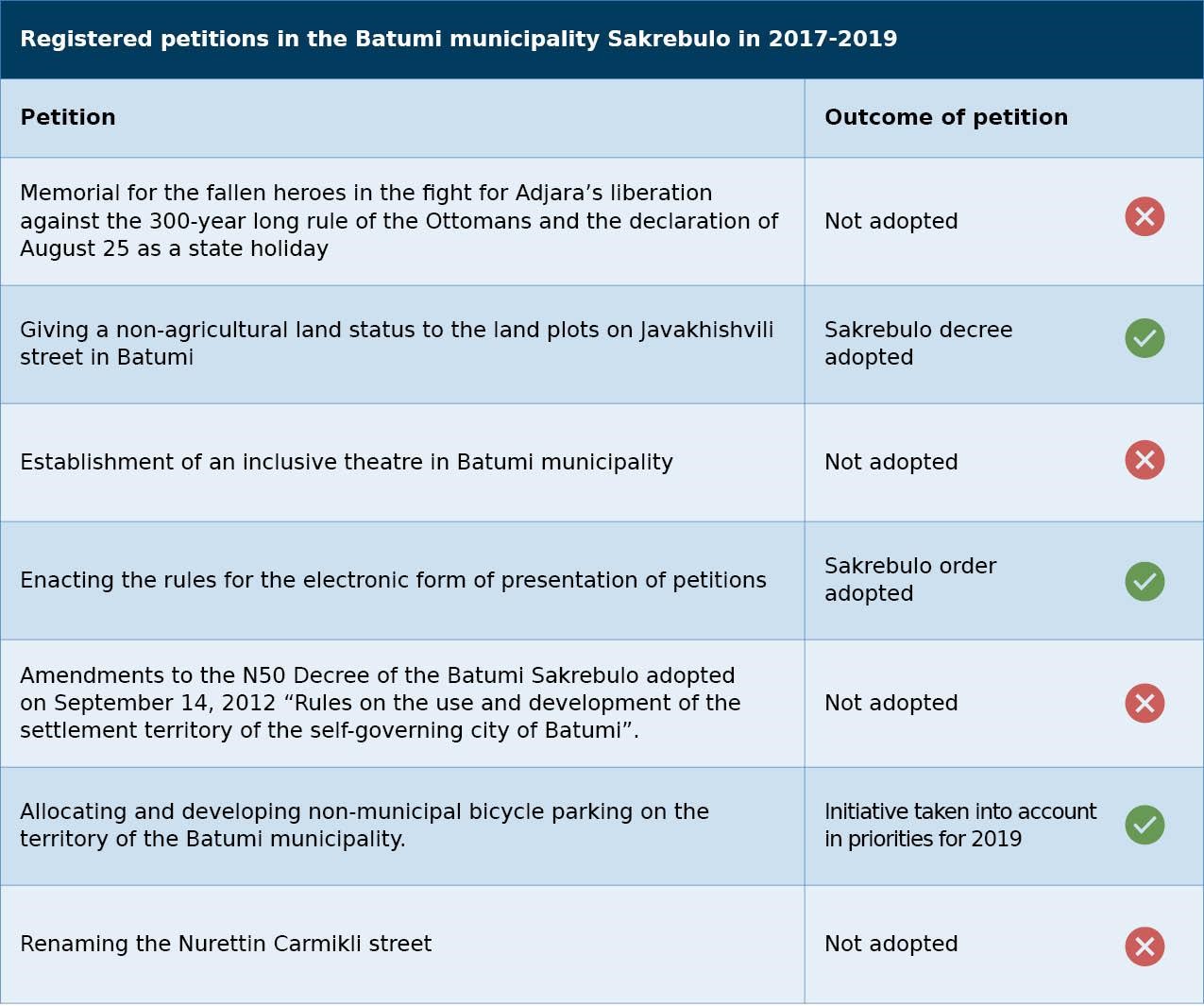 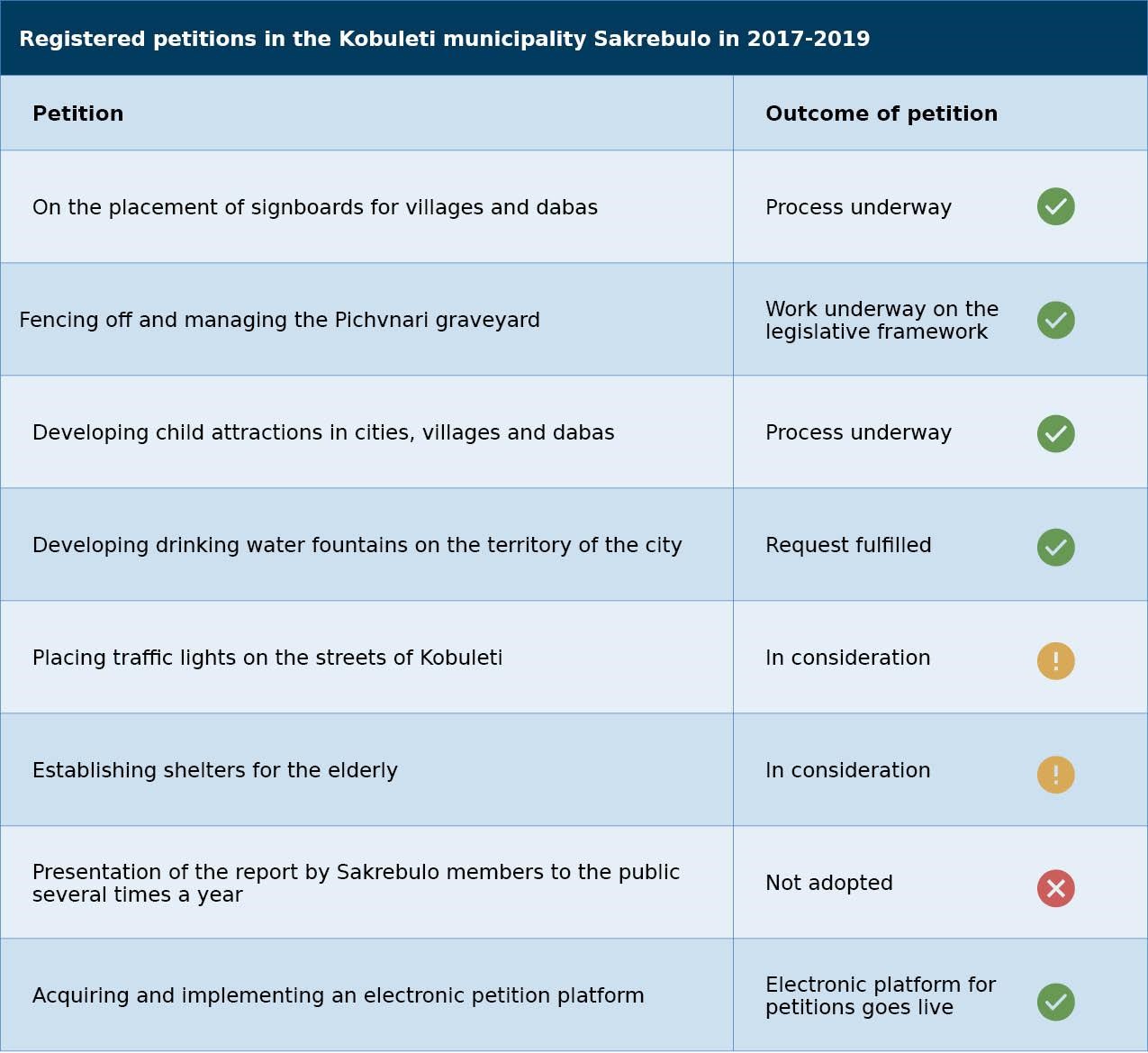 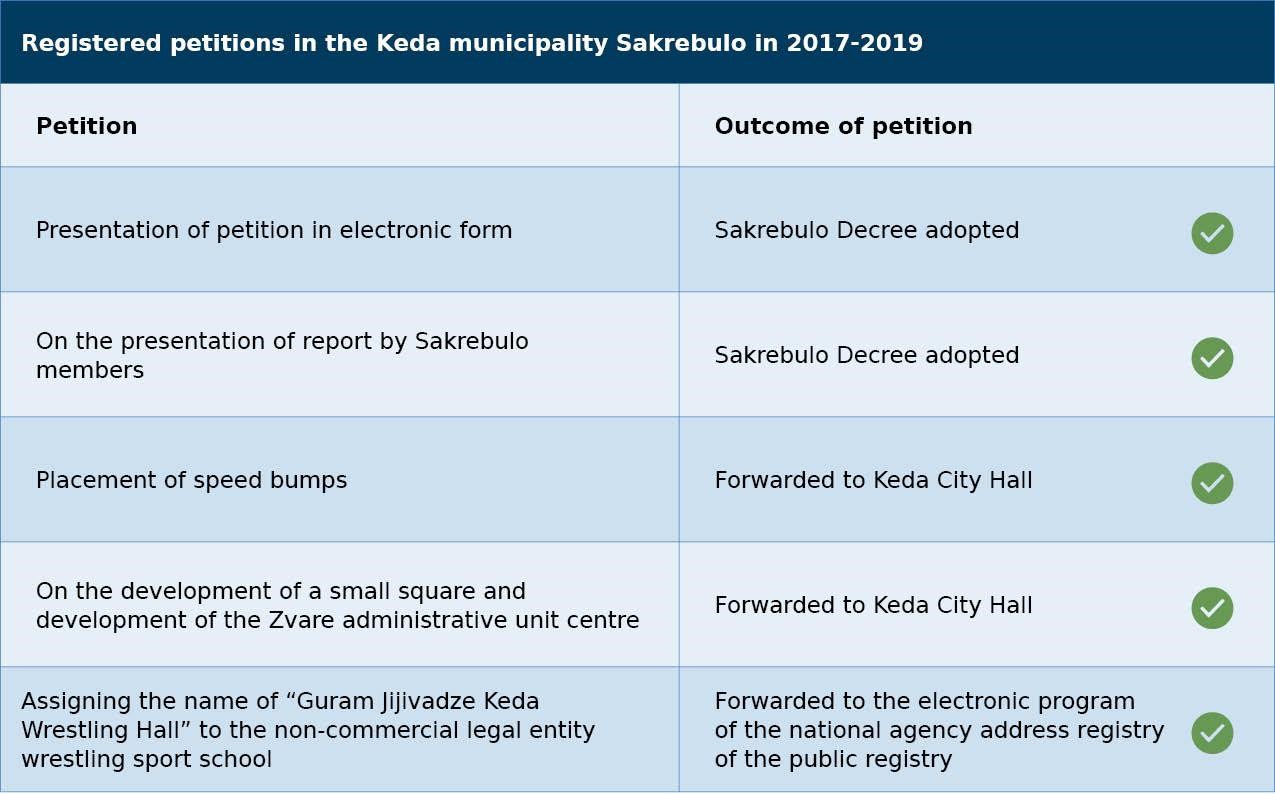 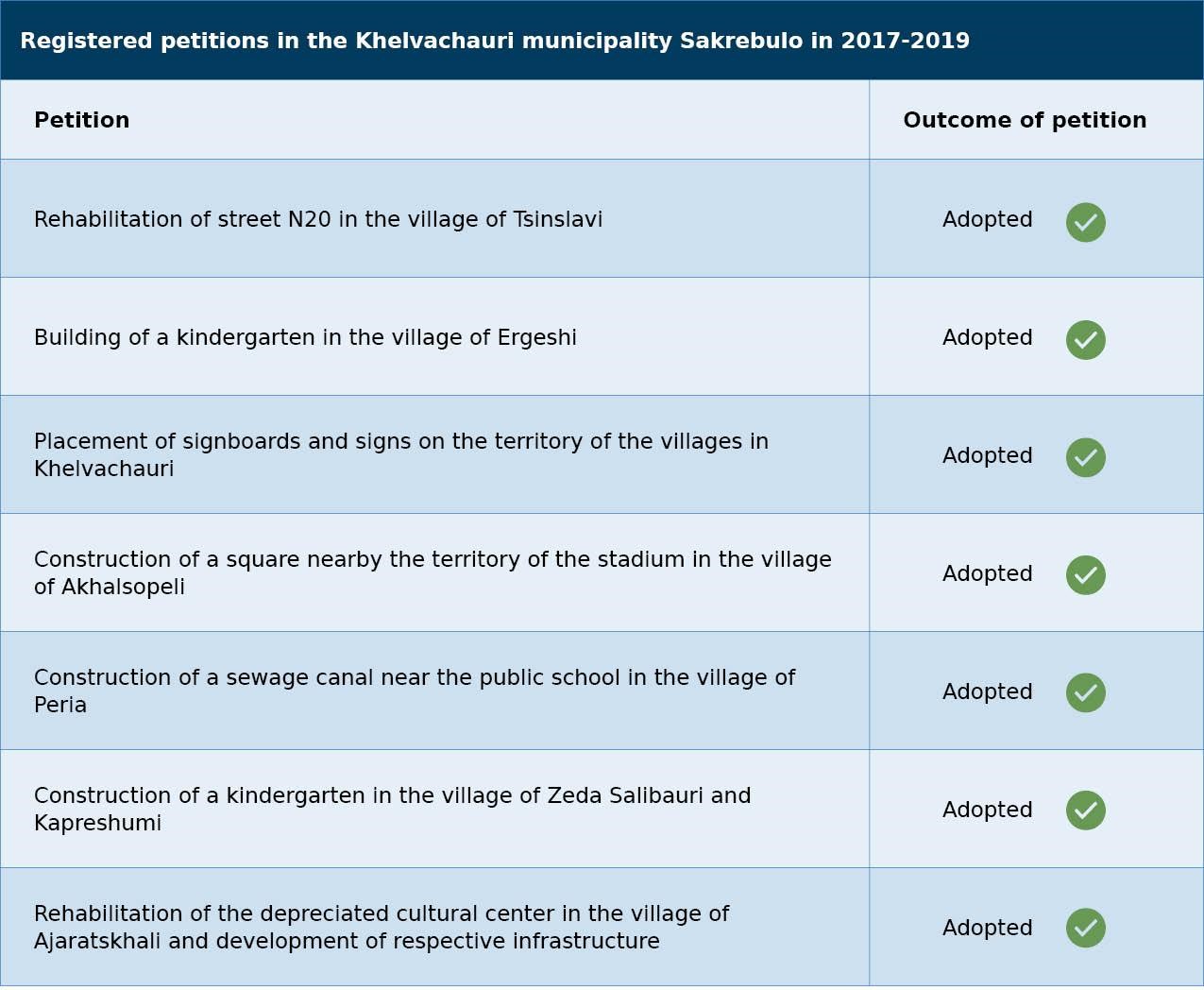 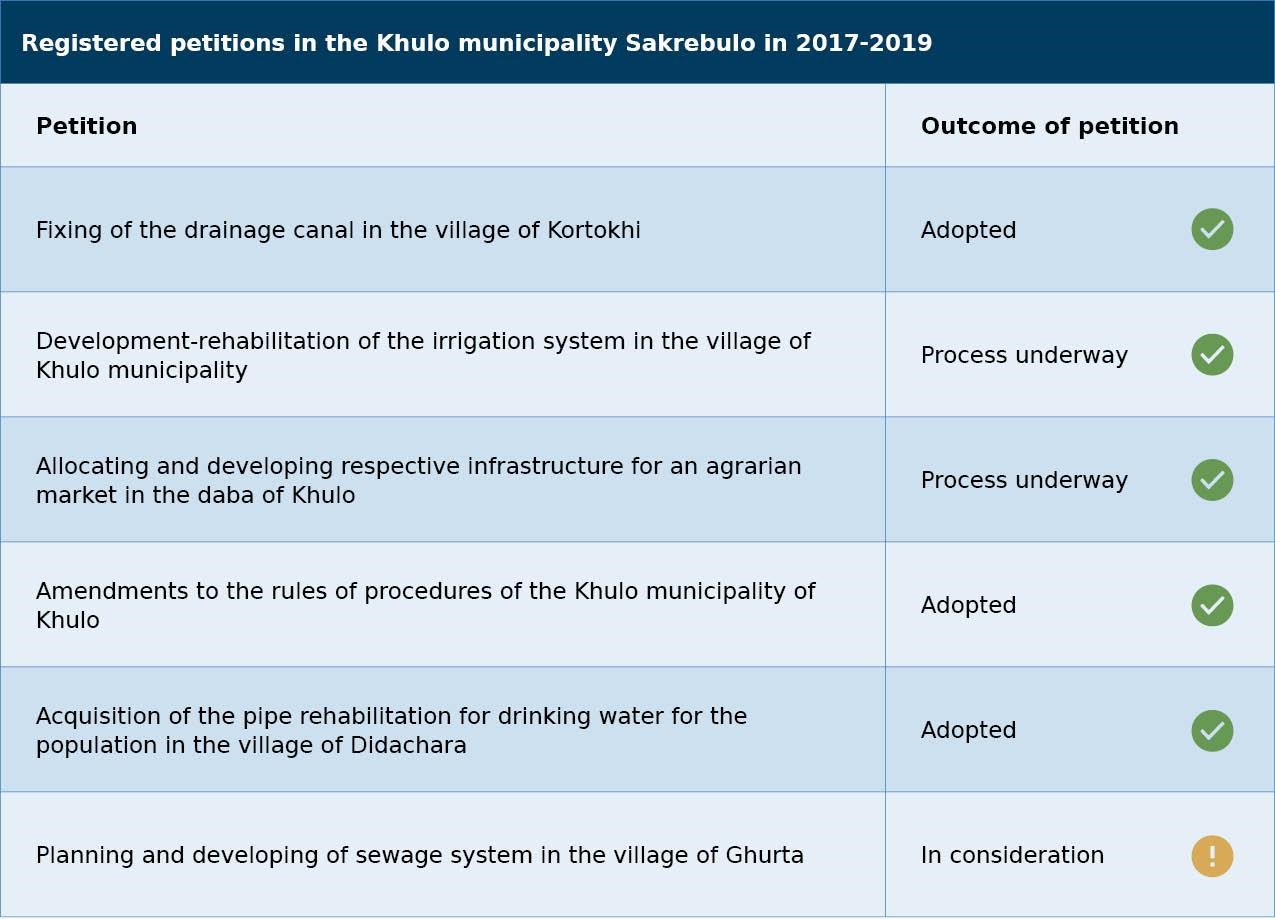 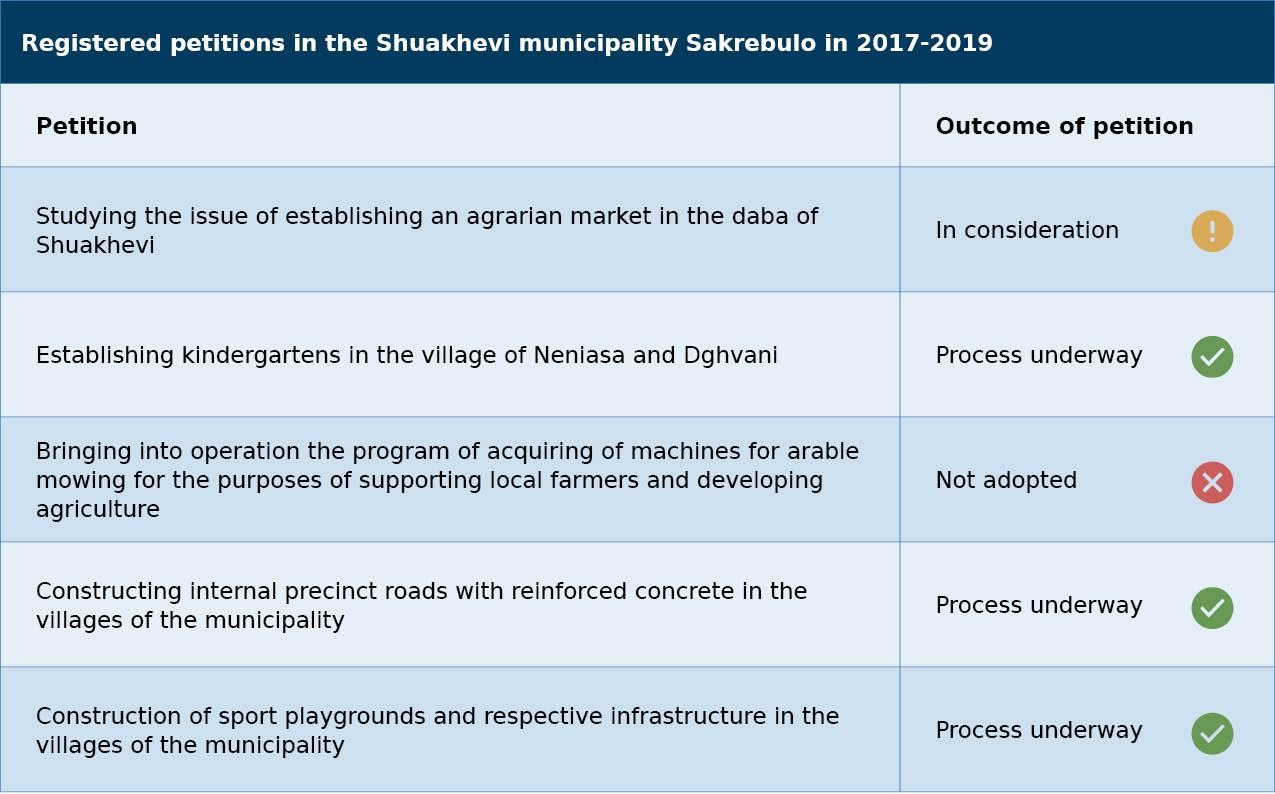 According to the Local Self-Government Code, the council of civil advisors, which is the deliberative body of the Gamgebeli/Mayor of the Municipality, is also a citizen engagement mechanism in the operation of the self-government.

Gender balance is maintained in all council of civil advisors.

The local self-government law grants citizens the right to attend council meetings. Citizens have the opportunity to register at the sessions, and their opinions or requests will be reflected in the minutes of the session.

The majority of Adjara municipalities publish information on the agenda of the Sakrebulo meeting on the website.

As in 2015-2016, members of Kobuleti Municipality Sakrebulo and representatives of the executive branch of the municipality regularly hold meetings with the citizens in 2017-2018, though no minutes have been made. At the same time, in 2017-2018, 3 members of the Sakrebulo presented the public report. It is important to note that in 2017, the Kobuleti Sakrebulo registered a petition to report to the population several times a year by the Sakrebulo members; however on September 29, 2017, the Sakrebulo didn’t approve the petition based on the argument that the Local Self-Government Code already establishes a specific date for the presentation of the report by the Sakrebulo members.

In 2017, the Khulo Municipal Sakrebulo members did not report to citizens and did not conduct field meetings with voters. In 2018, the Sakrebulo members, like in 2015-2016, fulfilled both of these obligations.

According to information received from the Shuakhevi municipality, all Sakrebulo members will submit a report by the end of the year. At the same time, members of the Sakrebulo hold individual field meetings, although no minutes are drawn up.

In all municipalities, the issues discussed at outreach meetings were in most cases related to infrastructure, social assistance, health, employment and land registration.

At the same time, the mayors of the municipalities of Batumi, Shuakhevi, Keda, Khulo and Khelvachauri have submitted their reports to the population, while the Kobuleti municipality has not provided this information.

This study shows that compared to previous years, municipalities in Adjara have been using the mechanisms of citizen engagement more effectively: the possibility of submitting petitions electronically in Keda, Kobuleti, Khelvachauri and Batumi is particularly noteworthy, however, according to Transparency International Georgia, the following steps need to be considered to further improve citizen engagement:

[1] City Hall of Kobuleti municipality did not provide us with the requested information;

[2] City Hall of Kobuleti municipality did not provide us with the requested information;