Possible Signs of Corruption in the Procurements of the Sighnagi Municipality 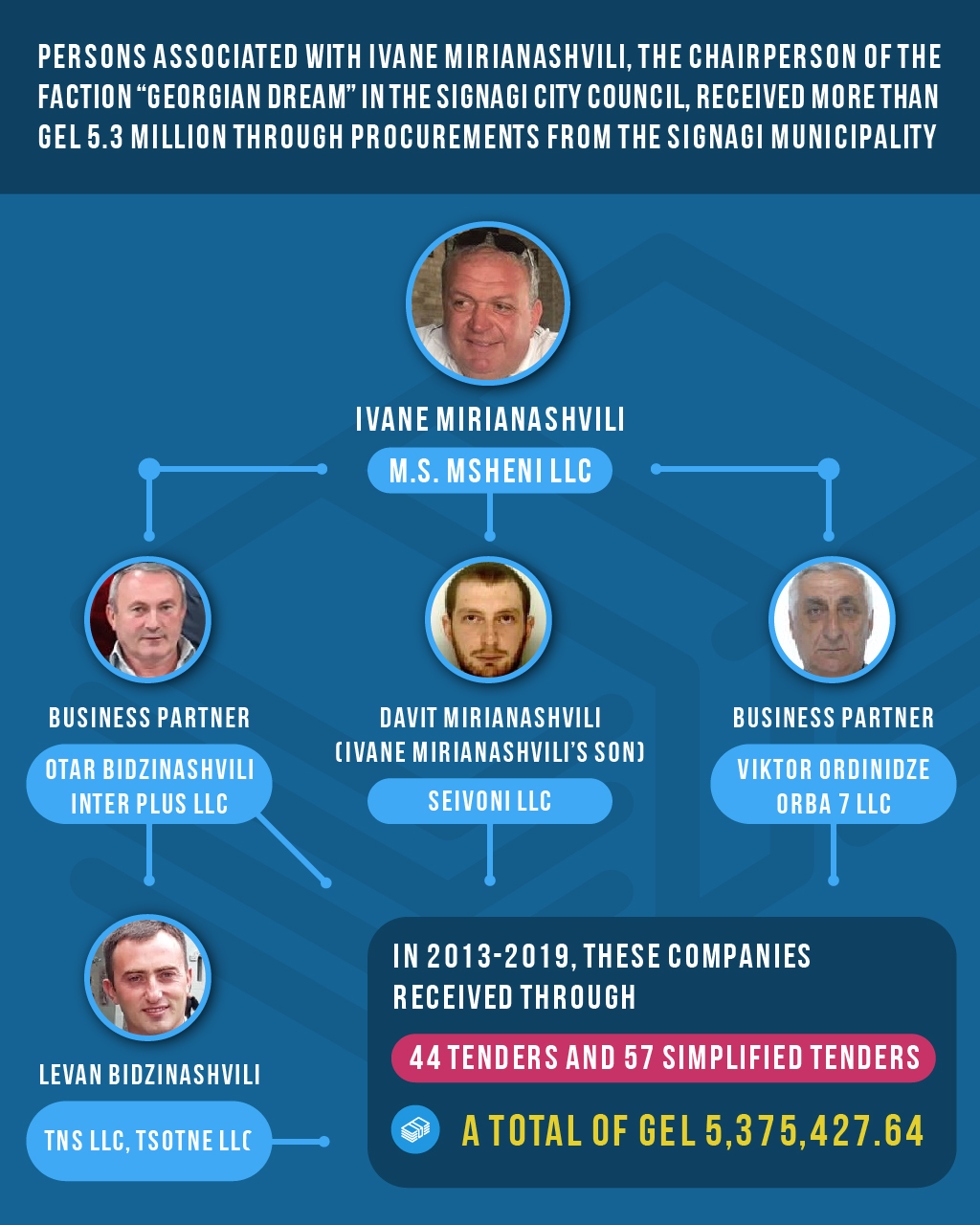 Ivane Mirianashvili’s son, Davit Mirianashvili, started securing simplified procurements and electronic tenders when his father became the Chairperson of the Faction “Georgian Dream” in the Signagi Municipality City Council. Seivoni LLC (S/N 404544365), the director and 100% owner of which is Davit Mirianashvili, secured one tender that totaled GEL 43,910.16 on May 15, 2019. According to this tender, his company had to repair Public School #2 in Nukriani and Public School #1 in Tsnori (electronic tender NAT190009590, 15.05.2019,  Contract N100).

Ivane Mirianashvili is also engaged in business activities. He is the founder of M.S Msheni LLC (S/N 440392004). This company secured GEL 18,510 through a simplified procurement in the Signagi Municipality (CMR150106565) in 2015. This was the period when Ivane Mirianashvili was the Chairperson of the Georgian Dream’s regional organization in Signagi.

The Major Incomes of the ‘Minor’ Companies

According to the entrepreneurial activities page in his asset declaration, Ivane Mirianashvili has two companies – Inter Plus LLC and Orba 7 LLC – listed as minor enterprises in which he holds no shares. Transparency International Georgia has learned about the friendship between their owners and Ivane Mirianashvili. The information provided in the asset declaration confirmed the links between these companies and Ivane and Davit Mirianashvili. This became the basis for launching an analysis into the work of these companies. 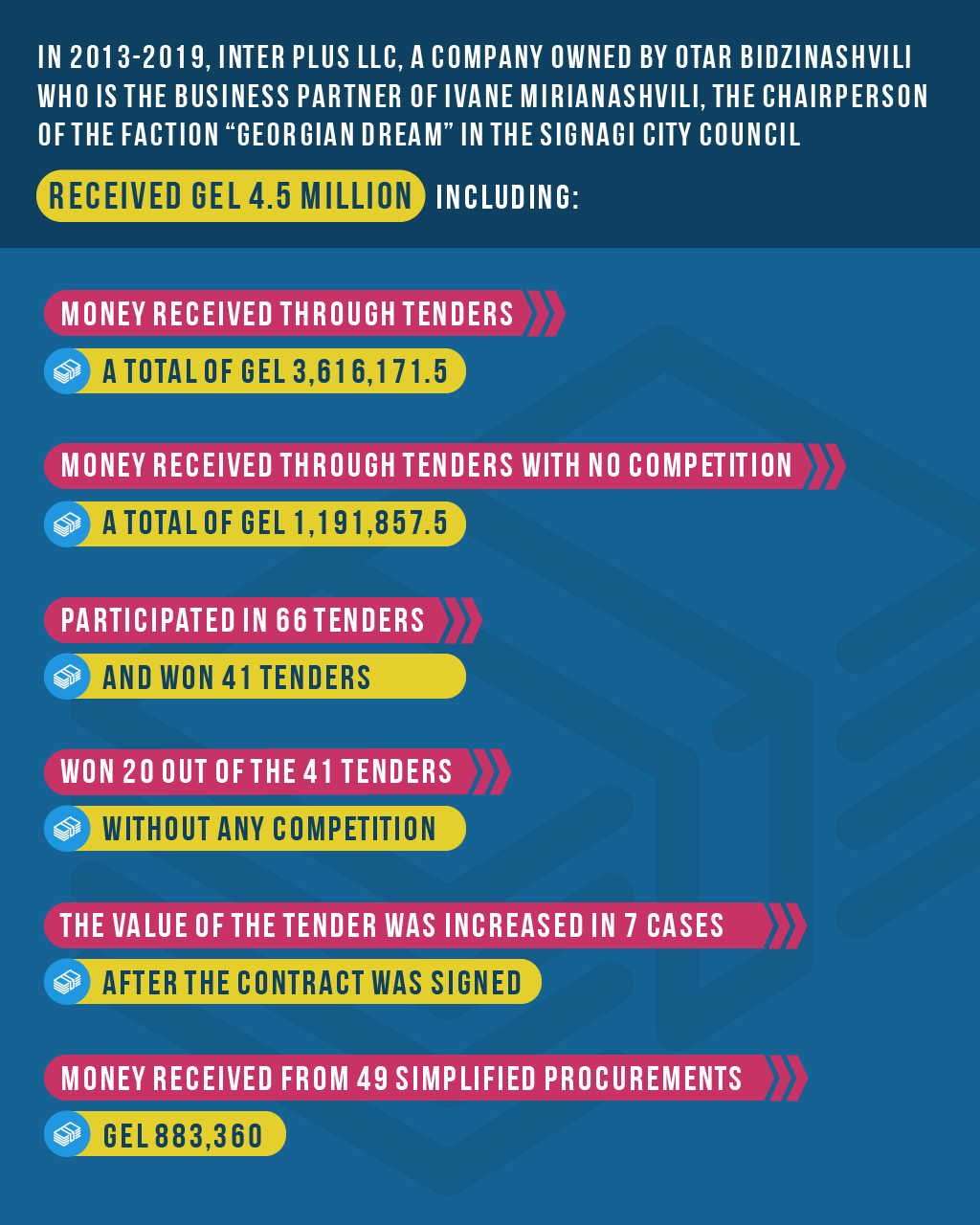 Inter Plus LLC (S/N 240420193, Kizikhi 2008 LLC prior to reorganization) is indicated in Ivane Mirianashvili’s asset declaration as a minor enterprise. Otar Bidzinashvili, who is indicated as a partner in the minor enterprise, was the Director and 100% owner of this company until January 23, 2019. Inter Plus LLC secured 49 simplified procurements for a total value of GEL 883,360 in 2013-2015 from the Signagi Municipality.

From January 1, 2013 till today, Inter Plus LLC has won 41 tenders with a total value of GEL 3,619,174.5. In 20 out of its 41 bids, Inter Plus LLC was the only bidder and secured the contract in a competition-free environment. Otar Bidzinashvili's company received more than GEL 4,502,534.5 from the Signagi Municipality.

On January 23, 2019, Otar Bidzinashvili transferred the 100% shares of the company to Lali Bichnigauri. Inter Plus LLC stopped participating in state procurements, but the enterprise has not yet been liquidated.

Viktor Ordinidze is the Director and 100% owner of Orba 7 LLC (S/N 206308501), which is indiated in the asset declaration as a minor enterprise. This company is connected to Seivoni LLC, which in turn belongs to Davit Mirianashvili.

Orba 7 LLC won the tender (NAT190015681) announced by the Signagi Municipality in August 2019. It was the only bidder. The lack of competitors in the tender raises additional suspicions. The value of this tender was GEL 341,367. The purpose of the tender was the construction of a building for the Regional Emergency Medical Assistance Service of the LEPL Emergency Situations Coordination and Urgent Assistance Center.

It is noteworthy that TNS LLC (S/N 440393021) secured 4 simplified procurements for a total value of GEL 386,461.98 in the Signagi Municipality in 2018-2019. The 100% owner and Director of this company is Levan Bidzinashvili, who is the son of Otar Bidzinashvili, the Director of Inter Plus LLC.

We analyzed open data and found that Ivane Mirianashvili owns an apartment in Tbilisi, on Janashia Street #21, which is registered on his wife’s, Ketevan Kartvelishvili’s, name. Otar Bidzinashvili carried out the registration for terminating the obligation of mortgage on this apartment on December 26, 2016, while Inter Plus LLC is indicated as an interested person/entity. This is exactly the same company that is indicated as a minor enterprise in Ivane Mirianashvili’s asset declaration.

Based on the aforementioned information, there is reasonable grounds to believe that there are circumstances in Ivane Mirianashvili's business activities and his capacity as an official that needs to be investigated by the respective state agencies. There are signs of unlawful restriction of competition and the existence of private and mercantile interests in relation to state resources.

Transparency International Georgia calls on the Anti-Corruption Agency of the State Security Service and the Prosecutor's Office of Georgia to investigate every tender won by Seivoni LLC, M.S. Msheni LLC, Inter Plus LLC, Orba 7 LLC and T&S LLC and to determine if the tender requirements were tailored specifically for them.