In the spring of 2015, the Georgian government announced its decision to make substantial adjustments to the universal healthcare program, and take other important steps to develop the national healthcare system.

In order to achieve these objectives, the Ministry of Labour, Health and Social Affairs (MoLHSA) used the simplified (direct) procurement procedure to sign a contract worth USD 300,000 with a British company Global Alliance for Health and Social Compact Ltd on April 6, 2015.

At the same time, a few days earlier, on March 18, 2015, Global Alliance received another government contract worth USD 300,000 from the Partnership Fund, also reached through the simplified procurement procedure. The contract covers services such as consultations on attracting investment and conducting feasibility studies on development projects for a number of clinics/real estate (Tbilisi Children's Hospital of Infectious Diseases; a piece of real estate located on the territory of the former Republican Hospital; JSC Universal Medical Center).

Per the official information obtained by Transparency International Georgia, it is impossible to say whether Global Alliance has enough experience and expertise to properly plan and carry out a comprehensive reform of the Georgian healthcare system.

The management of Global Alliance

Limited Liability Company Global Alliance was registered in the United Kingdom on August 30, 2014. The company's website gahsc.net does not contain any information about its experience in any field, including healthcare reform. In general, the company's website is both unprofessional and uninformative, which is very unusual for serious companies. 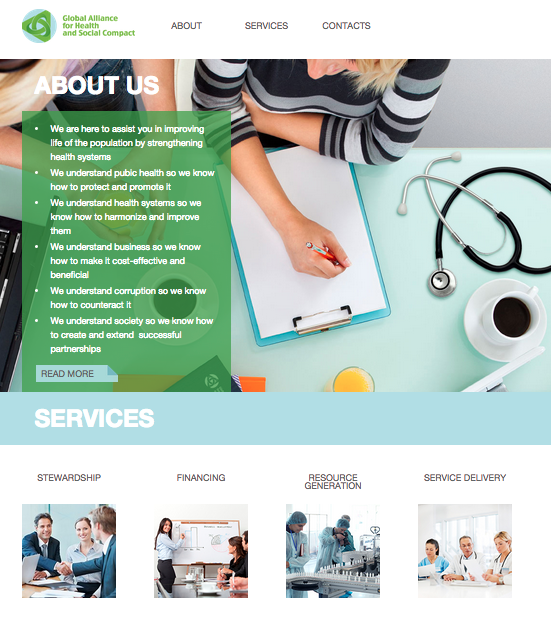 According to a company search platform endole.co.uk, Global Alliance has changed three directors since its registration (a period of less than a year). The current director of the company (and also its founder and owner) is a French national, Jean- Elie Charles Malkin, a doctor with 25 years of experience. Most recently he had been involved with the United Nations organization for combating AIDS, where he worked as a Regional Director and an advisor to the Executive Director. Malkin is also a member of several scientific organizations. He was appointed director of Global Alliance only on July 20, 2015. Based on the information we managed to obtain, his predecessors did not have any relevant knowledge and experience in the field.

According to the scarce information available through publicly available sources, in the early 2000s Ganna Aseieva had worked as an administrative officer for the International HIV / AIDS Alliance in Ukraine. We were unable to obtain any information about Christopher Davis.

The Ministry of Labour, Health and Social Affairs cconfirmed that the services covered within the contract include implementation of the reforms of both universal and primary healthcare systems, and assistance in the elimination of hepatitis C. According to the contract, Global Alliance will consult the ministry by structuring and implementing complex, synergistic activities that will help the ministry improve the performance of the healthcare system, further develop the national healthcare system, harmonize the national legislation with that of the EU, and strengthen the ministry’s management, regulatory and intellectual capacities.

Global Alliance must also implement modern approaches of cost containment, in order to eliminate irrational healthcare spending, a particularly troublesome problem for universal healthcare programs. Cost containment is one of the most important challenges for the Georgian healthcare system.

In our opinion, the reform of the healthcare system is an extremely important task that needs to be implemented only after careful calculation and planning. Every step in this direction should be consistent as well as well thought out so that the next political leadership does not have to restart the whole process and incur all the associated costs. We believe that only the best specialists of relevant experience should be involved in the planning as well as implementation of the reform.

We urge the MoLHSA to:

We believe that the Ministry of Labour, Health and Social Affairs needs to provide more information on these contracts to the general public.