According to the Law on State Procurement, a contest is an alternative method of state procurement that can be used for purchasing design services. Unlike electronic tenders, the process of procurement through contests bypassed the State Procurement Agency (SPA) website. The process was non-transparent, since it was not conducted electronically and the option of appealing contest outcomes to the SPA’s Dispute Resolution Board was unavailable. This, however, changed on July 1, when the SPA integrated contests into the overall electronic procurement system. On July 1, a new Order on the Approval of New Rules and Conditions for State Procurement of Design Services through Contests signed by the Chairman of the State Procurement Agency also entered into force. This change is a positive step towards further transparency and competition in the state procurement system. Transparency International Georgia welcomes the progress achieved at the legislative level and hopes that the new electronic contests will correct the existing flaws of the system.

The following is a description of the old practice of holding contests, the changes that took effect on July 1 as well as some contest statistics.

The old and the new contest rules

According to an Order signed by the Chairman of the State Procurement Agency on February 10, 2011, the procuring entity was authorized to set the conditions for and choose the winner of a contest at its sole discretion. The old legislation regulating contests and the procurement system in general contained a number of shortcomings, chief of which was the broad discretion granted to the procuring entity and the resulting ability to manipulate contest conditions. This shortcoming reduced transparency and increased the risks of corruption and wasteful spending.

Georgia committed to introducing a platform for electronic contests under the Open Government Partnership Action Plan for 2014-2015. This change is also one of the priorities of the Anti-Corruption Strategy Action Plan for 2015-2016. As a result, the Chairman of the State Procurement Agency signed an Order on May 22, 2015, introducing new contest rules that took effect on July 1. An electronic system for contests (eContest) was also launched on this date. The new system and the new rules will rectify a number of shortcomings:

Contests are only used to purchase design services, making them the least used procurement method. A total of 1,700 contests have been announced since 2011. According to information provided to us by the State Procurement Agency, 1,280 contracts have been signed through contests as of June 5, 2015. The total cost of services provided through these contracts amounts to GEL 31 million 485 thousand. The largest procurer of design services is the Roads Department, which signed 9 out of 10 most expensive contracts announced through contests. Two of the largest contracts, with a combined value of GEL 6 million 571 thousand, were signed by the Roads Department with a company called Design and Research Institute Transproject Ltd. It should be noted that 80% of contracts on design services are worth less than GEL 20,000 (Figure 1). 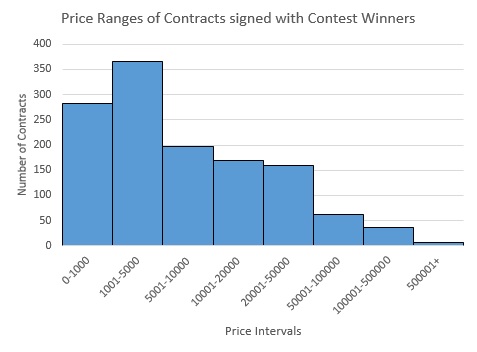 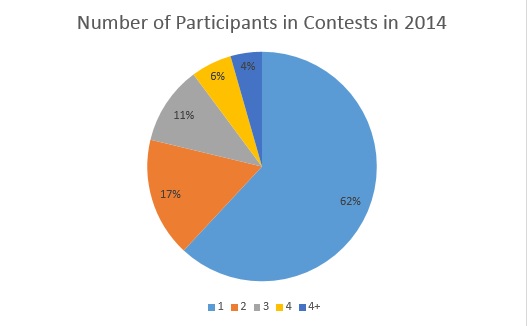 The low competitiveness of contests as an alternative method of state procurement could be explained by several circumstances. First, there could be only a few companies in the design services market in Georgia. Second, a major shortcoming of the contest system, whereby candidates have to physically file their applications to the procuring entity, creates a geographic barrier for companies located far from the procuring entity. Finally, the closed and non-transparent nature of the existing