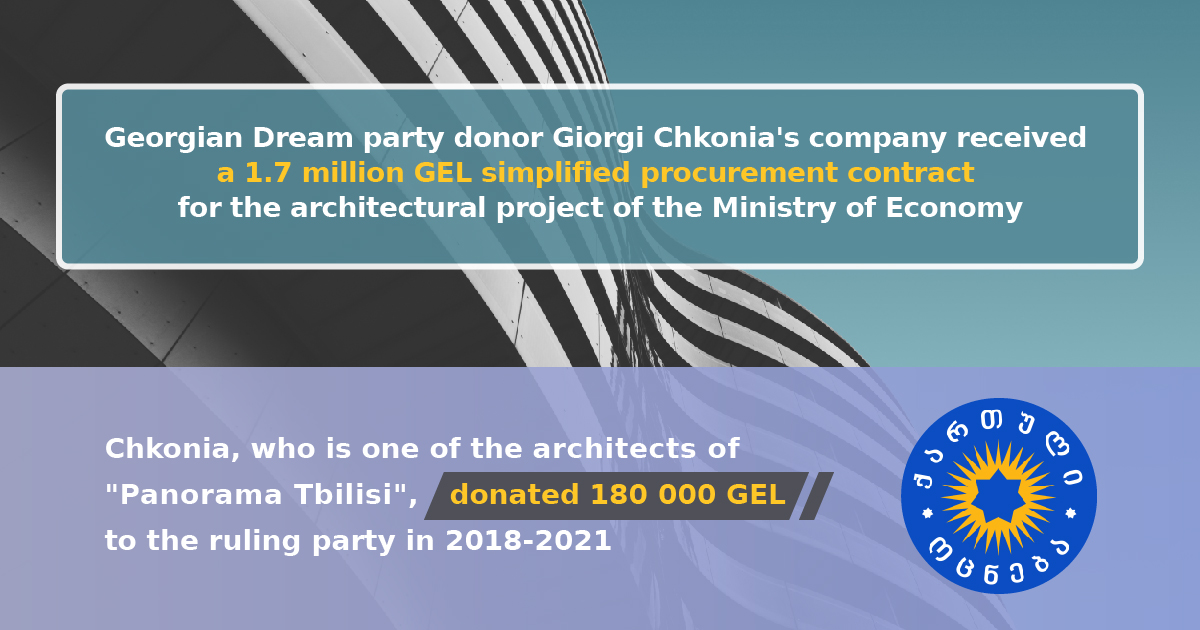 On 6 October 2022, for purchasing the architectural service for the Ministry of Economy and Sustainable Development’s new building to be built, the LEPL National Agency of State Property signed a 1 724 814 GEL worth simplified procurement contract with a company owned by Giorgi Chkonia who has made an amle donations to Georgian Dream party in the past and is an architect of Bidzina Ivanishvili’s "Panorama Tbilisi" project.

On 18 April 2022, Prime Minister Irakli Garibashvili noted that [GR1] "the Ministry of Economy has not had its own building for 7 years, which is certainly a shame," and announced that the new building of the Ministry and all its LEPLs will be built in Ortachala.

As noted above, after 7 years of not having their own building, in April this year, the decision was made to place the Ministry of Economy and its agencies in a single new building. By the order of the Minister of Economy and Sustainable Development №1-1/240, May 31, 2022, a working group was established, which examined the needs of the central apparatus and its LEPLs in order to create a safe and comfortable working space in the new administrative building. On 14 July 2022, the Minister of Economy directed the LEPL National Agency of State Property to develop the architectural/construction project for the new building in a limited time and to provide the Ministry and its agencies with a single administrative building.

On 16 August 2022, the National Agency of State Property requested the consent of the State Procurement Agency for the simplified procurement of architectural services necessary for the construction of the new building of the Ministry, which was granted. Preparation of the state and public importance event within a short period of time was prescribed as a precondition for the simplified procurement.

Placement of several state agencies in one building, thus saving utility and administrative costs, as well as locating various state service-providing agencies at a single address, is a smart decision, but given the fact that it took 7 years to come to this decision, it is vague why to rush with simplified procurement and save 1 or 2 months.

LEPL National Agency of State Property signed a contract with Midamo LLC worth 1 724 814 GEL for the purchase of architectural and related services for the new building of the Ministry of Economy through a simplified procurement (procurement number: CMR220123536). The Midamo LLC was founded in April 2017 and its 100% shareholder and the director is Giorgi Chkonia, who donated 60 000 GEL in 2018 to the presidential candidate Salome Zurabishvili, supported by the Georgian Dream party, and directly to the Georgian Dream party 120,000 GEL in 2020-2021. In total, he donated 180 000 GEL in favor of the ruling party.

Prior to October 2022, neither Midamo LLC nor Giorgi Chkonia's other companies have ever participated in public procurement.

In addition to the fact that the owner of Midamo LLC is an ample donor of the ruling party, he is also close to the members of the government. According to the press release of the Tbilisi City Assembly in 2016, the Urban Planning and Municipal Utilities Commission discussed the project to be implemented at Mount Tabori. This project is being implemented as part of the Panorama Tbilisi, which is executed by the former Prime Minister of Georgia, Bidzina Ivanishvili. Architect Giorgi Chkonia (currently the owner of Midamo LLC) and project manager Irakli Karseladze presented the project at the commission meeting. At that time, Irakli Karseladze was working as the executive director of the Georgian Tourism Development Fund founded by Bidzina Ivanishvili, and at the meeting of the City Assembly projects of the exact fund were discussed. From February 2021, Irakli Karseladze is the Minister of Regional Development and Infrastructure of Georgia.

Given the circumstances above, we consider that they might reflect signs of corruption. Therefore, we call on the Anti-corruption Department of the State Security Service and the General Prosecutor's Office of Georgia to investigate to what extent the law was violated while carrying out the said public procurement.