The companies of the former member of Batumi City Council - Nukri Dolidze, Bondi 2009 and Monoliti 2005 are one of the major implementers of large infrastructure projects in Adjara. Both companies received up to GEL 130 million in 2010-2021, mainly from state procurements of Batumi City Hall and Adjara Roads Department, among them 68% were won without competition, by disqualifying the competitors and simplified procurements. 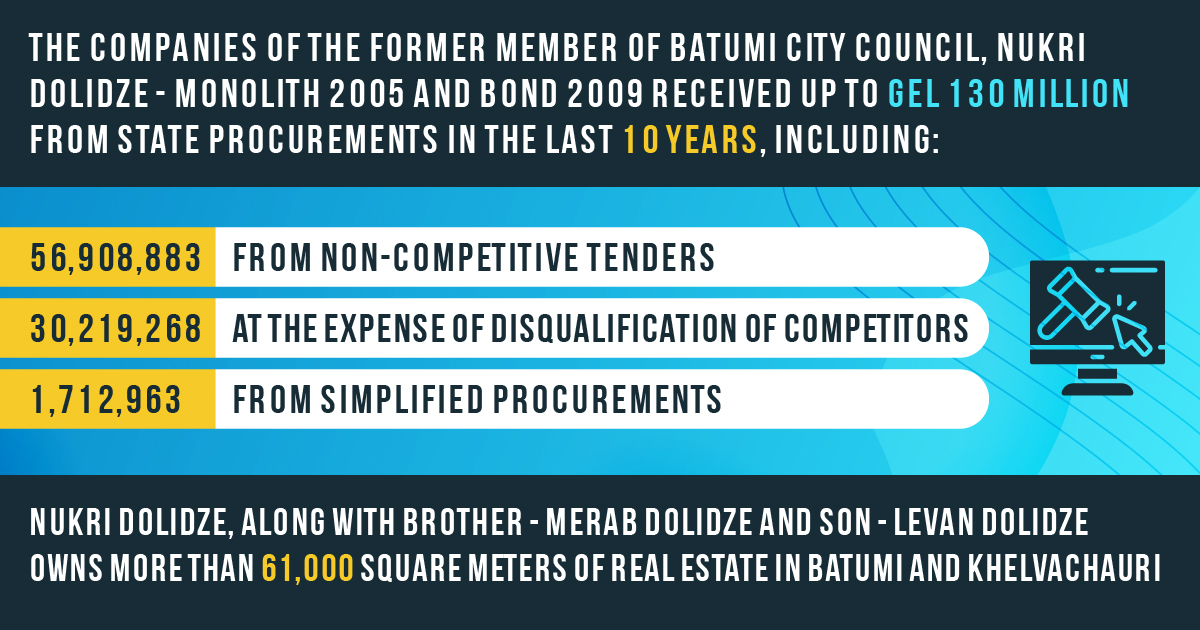 The company that belongs to Shota Mikeladze - Nukri Dolidze’s former partner - T.E.M.I. LTD receives hundreds of thousands of GEL from the tenders. Mikeladze is also a big donor of the Georgian Dream Party.

The case of Nukri dolidze is related to one of the most important aspects of corruption-related risks - Revolving Door. The conflicts of interest related to the Dolidzes do not end here - Levan Dolidze, Nukri Dolidze’s son, was an adviser of the Chairman of the Government of Adjara in infrastructural issues for several years and was appointed as a Director of Batumi Municipal Horse Riding Club in December 2020. The justification of such a decision was not clear. Also, his asset declaration includes significant violations.

Nukri Dolidze was elected as a majoritarian member of the Airport District in Batumi City Council in the 2010 local self-government election from the National Movement party. Dolidze moved to the self-government from business - before becoming a member of the city council, he already had two companies founded along with his partners: Monoliti 2005 LTD founded on February 18th, 2005, and Bondi 2009 LTD on June the 2nd, 2009. He did not participate in elections in 2014 and expanded his business.

Nukri Dolidze owns 25% of shares in Monoliti 2005 (his brother - Merab Dolidze owns 50%, the rest 25% is owned by Archil Kajaia). This company became active in state procurements in 2011 and won almost GEL 500,000 without competition in the first tender. Since then, Monoliti 2005 won 65 state procurements, 31 of them without competition and 11 at the expense of disqualifying the competitors. The company received GEL 29 million in total.

Batumi City Hall and its N(N)LE - Civil Infrastructure and Amenity Service signed 53 out of 65 tenders with the company. In other cases, the purchasers are Kobuleti municipality, Batumi boulevard, and Municipal LTD - Batumi Water, administration of Samgori district, etc. 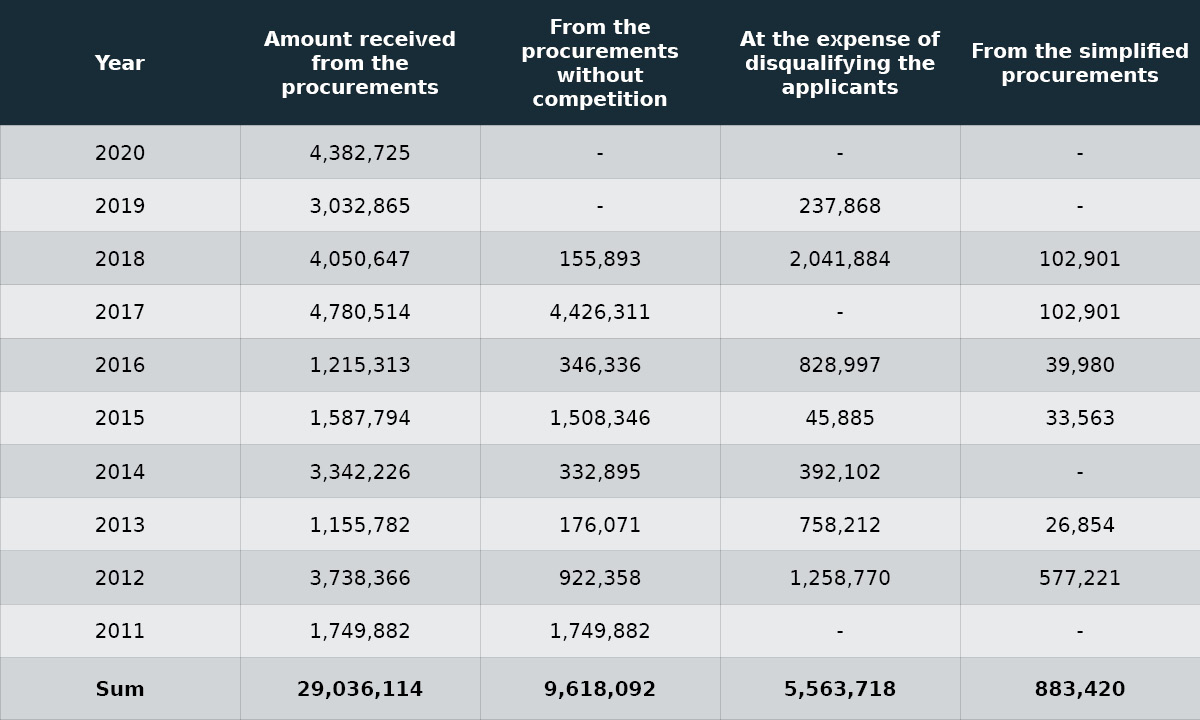 The second company in Nukri Dolidze’s partial ownership - Bondi 2009 received almost four times as much from the state procurements as Monoliti 2005. Nukri Dolidze owns 25% of shares in this company along with Badri Chaghalidze, Otar Putkaradze and Davit Devadze.

Bondi 2009 implemented as well as carries out the large state orders in Batumi and Adjara region: It won 102 out of 194 tenders and did not have competitors in 48 of them, while the company signed the contracts at the expense of disqualifying its competitors in 12 cases. Adjara Roads Department was the purchaser in 55 cases, Batumi City Hall in 29 cases and the rest of the contracts were signed by Batumi municipal LTD Sandasuptaveba, Adjara Government’s LTD Goderdzi resorts, and Batumi Boulevard.

In total, the company received GEL 100,900,362 worth of contracts, out of which GEL 72,775,884 (72% of the revenues) is the share of the tenders won by the disqualification of other companies, the tenders without competition, and the simplified procurements: 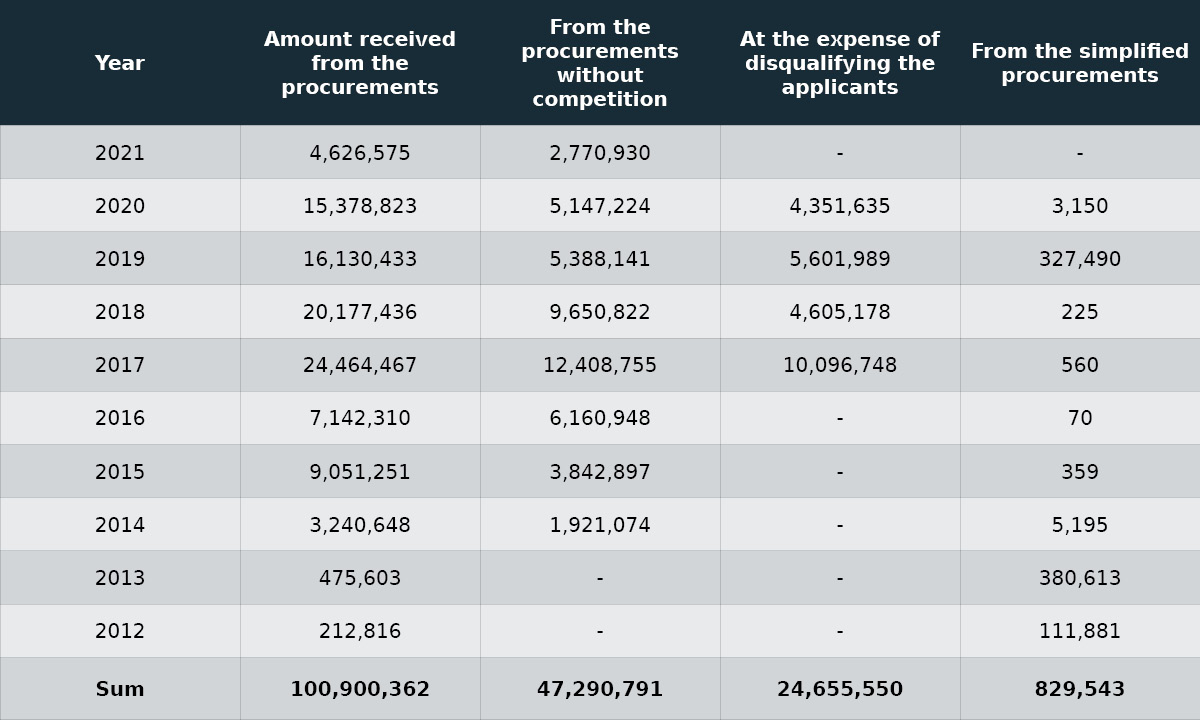 Bondi 2009 and Monoliti 2005 received up to GEL 130 million from the state procurements in 2011-2021, where Batumi City Hall and its municipal Civil Infrastructure N(N)LE were the purchasers in 82 cases, while Adjara Roads Department in 55 cases. 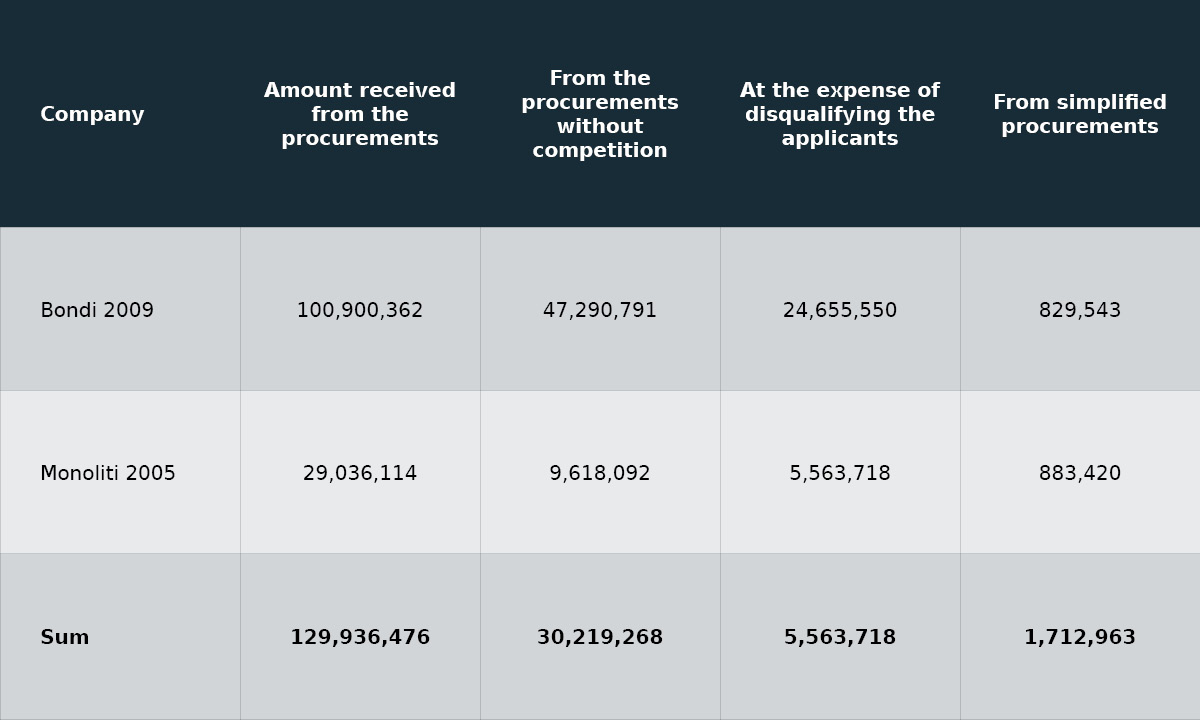 Back in 2018, Nukri Dolidze was a shareholder of another company, Invest Group LTD. Shota Mikeladze, another shareholder of the same company, donated GEL 50,000 to the ruling party - Georgian Dream before the 2020 Parliamentary Elections. Mikeladze is a shareholder and director of several companies. One of his companies, T.E.M. LTD, received GEL 587,173 from state procurements in Adjara in 2013-2016, where 86% of the amount was received without competition.

Nukri Dolidze’s son, Levan Dolidze worked as an adviser to the Chairman of Adjara Government in infrastructural issues in 2018-2020.

On December 30, 2020, Archil Chikovani, an acting Mayor of Batumi, appointed Levan Dolidze as a Director of the municipal Horse Riding Club. In his asset declaration submitted in February 2021, Levan Dolidze did not disclose the information on the remuneration received from his previous job (the position of advisor to the Chairman of Government based on an employment contract). Neither did he disclose the information on his property, nor on the revenue received from the company where he owned shares.

Levan Dolidze, along with his family members, owns a 2602 sq/m land with a building on it located at Machavariani street, Batumi.

Levan Dolidze in his asset declaration states that he owns a company - Grand Maison with 4 other partners. This company owns a 8,652 sq/m land on Shartava street, Batumi, where residential and hotel apartments - Calligraphy Towers are under construction. According to the information from the National Registry website, the company has been selling residential spaces in the building under construction since August 2020, however, in the asset declaration submitted in 2021, where he was obliged to disclose the information on the revenues received in 2020, Levan Dolidze did not disclose the revenues received by selling the residential spaces.

All three of the aforementioned circumstances violate the requirements of the law on Conflict of Interest and Corruption in Public Service.

More than 61,000 square meters of real estate in Batumi and Khelvachauri

In parallel with winning of state tenders and receiving revenues by Monoliti 2005 and Bondi 2009, the number and volume of land, commercial and residential properties owned by them has been increasing since 2011. The companies became the owners of 61,463 square meters of real estate based on the contracts concluded with private persons, unconditional auctions and contracts concluded with Batumi municipality.

The process of receiving the real estate from the state/municipal bodies requires a separate study, therefore, Transparency International Georgia plans to continue research in this regard. This time, we present the list of the companies under the ownership of the former member of Batumi City Council - Nukri Dolidze and his son - the Director of Batumi municipal Horse Riding Club, Levan Dolidze: 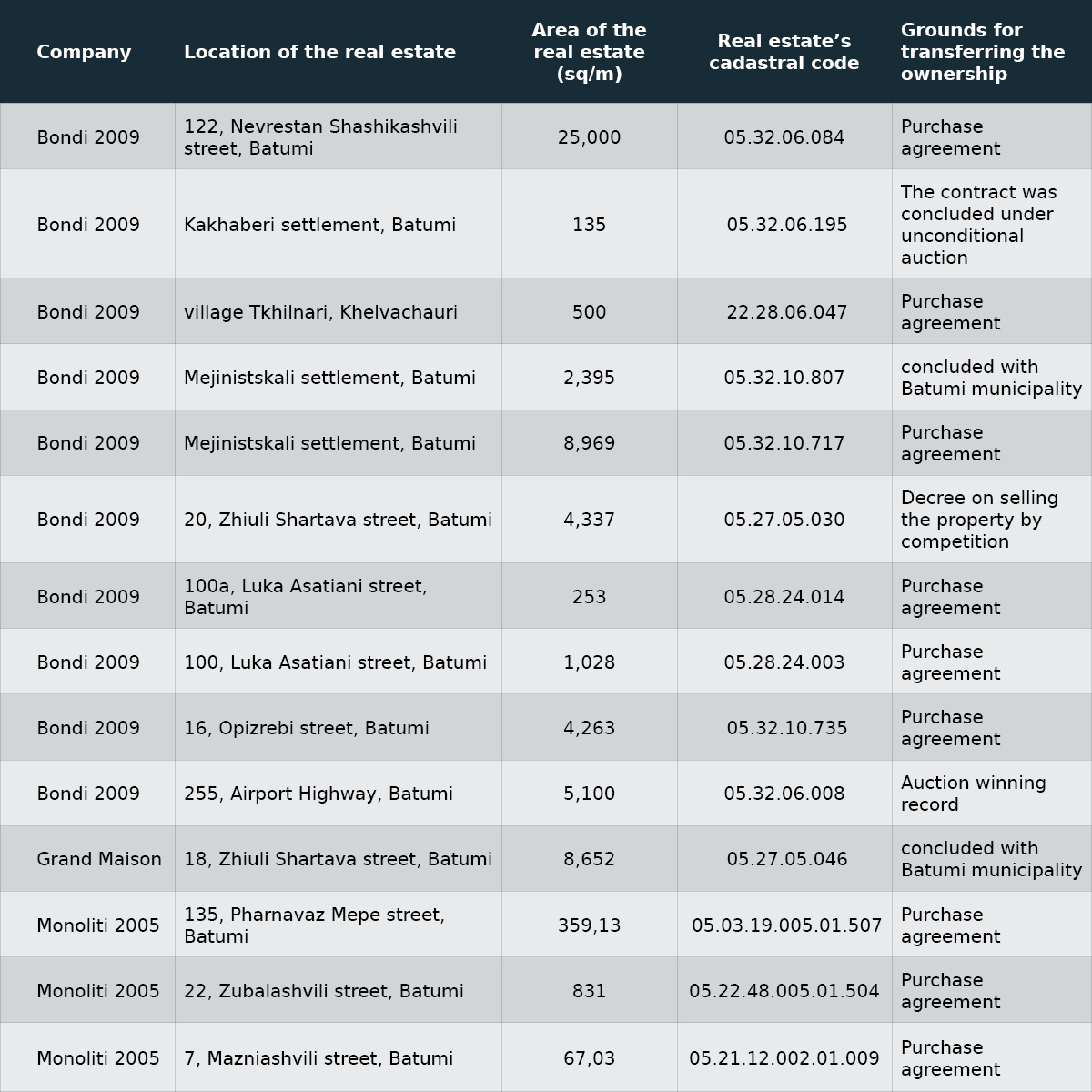 Another business activity related to the Dolidze family is Kolkhuri Sakhli LTD, brand name -restaurant Adjarian House. Mamuka Dolidze, Nukri Dolidze’s brother, is the owner and Director of this company.

The favoritism in state procurements of the companies of the former member of Batumi City Council - Nukri Dolidze and his family members reveals the problem of the Revolving Door and emphasizes the lack of mechanisms for reducing corruption risks.

In its report, the State Audit Office directly pointed out the cases of Monoliti 2005 and Bondi 2009 winning the state procurements without competition. Nevertheless, the procuring entities did not improve the conditions of competition and therefore, they did not optimize the budget expenditures.

Nukri and Merab Dolidzes and their associates mainly donate to the ruling parties. It has become a rather vicious practice, when business representatives donate to political forces, only when this force comes into power. Transparency International Georgia periodically publishes reports on similar practices.

The appointment of Levan Dolidze as the adviser/consultant of the Chairman of Adjara Government in the infrastructural issues encouraged the non-transparent employment policy in the region. According to Transparency International Georgia, these decisions were not motivated by the necessity of effective human resources management. Neither Adjara Government nor Batumi City Hall explained the necessity and purpose of Levan Dolidze’s appointment to the aforementioned positions and the compliance of his qualification with the positions he held.

[1] According to the Public Registry data, Bondi 2009 is the future owner of this piece of land, however, Batumi Municipality is the current owner.

[2] The municipality sold this land to Bondi 2009 initially. Later, Bondi 2009 sold it to the company Grand Maison, which is in the partial ownership of Nukri Dolidze’s son.