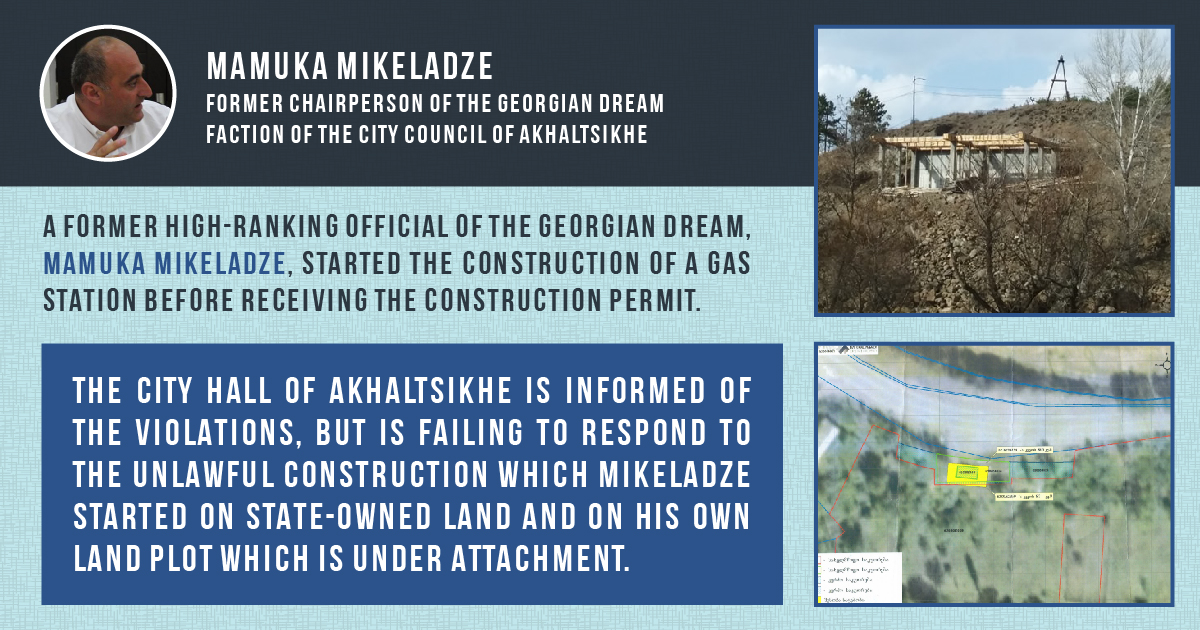 The former chairperson of the Georgian Dream faction at the City Council of Akhaltsikhe, Mamuka Mikeladze, has started the construction of a gas station without a permit. The former high-ranking official is building the gas station at the entrance of the city, on his own land, although the constructed building covers land plots owned by the state as well as yet another land plot owned by Mikeladze, which is under attachment. The City Hall of Akhaltsikhe has been informed of the violations. Representatives of the agency have said they are studying this issue, though we still don’t know anything about measures taken by them.

Mamuka Mikeladze was the chairperson of the Georgian Dream faction at the City Council of Akhaltsikhe of the convocation of 2014-2017. Currently, he is building a gas station adjacent to 57 Tamarashvili Street in Akhaltsikhe, next to the central highway. With this purpose, he founded ATLANT-oil LLC on October 4, 2019. He is the director of the company and owns a 50% stake in it, with the remaining 50% owned by Imeda Mumladze, a businessman from Akhaltsikhe. On October 30, the director of the newly founded limited liability company applied to the City Hall of Akhaltsikhe for the construction permit of a gas station on his non-agricultural land plot (with an area of 35 sq. meters) located adjacent to 57 Tamarashvili Street. However, he started the construction before receiving the permit.

The City Hall of Akhaltsikhe gave the former high-ranking official the construction permit for 35 sq. meters two and a half months after application, on January 16, 2020, after it had received two letters regarding this issue from TI Georgia. By that time, however, Mikeladze had already constructed the building.

The City Hall failed to exercise supervision on the construction. Both the executive body of the municipality and the National Agency of State Property learned about the violation of the boundaries from us. The agency confirmed the violation and had forwarded the relevant information to the City Hall of Akhaltsikhe by February 19, 2020, requesting the agency to respond. However, it remains unknown whether relevant measures were taken with regard to the construction of the gas station in violation of law.

This is not the first case of violation of law by Mikeladze to which the relevant agencies have been slow to respond.

In parallel with being the chairperson of the Georgian Dream faction at the City Council of Akhaltsikhe, in July-August 2016 Mamuka Mikeladze also served as the chairperson of the City Council’s Commission on Recognition of Titles on Land Plots Owned (Used) by Physical Persons and Legal Persons of Private Law. It was during this period that he legalized his ownership of a non-agricultural land plot with an area of 275 sq. meters adjacent to 57 Tamarashvili Street in Akhaltsikhe. Mikeladze was the person who filed the application as well as the one who granted it.

About a year and a half later, the Samtskhe-Javakheti Division of the Investigation Service of the Ministry of Finance launched an investigation into this fact under Part 2 of Article 182 of the Criminal Code. This article deals with appropriation or embezzlement using one’s official position, although the results of the investigation are still unknown. We only know that Mikeladze’s land plot has been under attachment since the investigation was launched.

TI Georgia calls upon the City Hall of Akhaltsikhe to study the issues related to the construction of the gas station in violation of law and to take relevant measures. We also call upon the State Security Service to find out whether a corrupt deal has taken place in connection with the unlawful construction and to act in accordance with law.