This year, for Christmas and New Year, Adjarganateba LTD again will decorate Batumi with outdoor lighting. On November 21, the tender commission decided that the documentation submitted by Adjarganateba fully complies with the set requirements and it will sign a contract with this company in the coming days. N(N)LE City Agency for Infrastructure and Amenities established by Batumi City Hall announced a tender (NAT190020542) for decorating the city during the Christmas and New Year's Eve. According to the tender requirements, a bidder should have completed the maintenance, operation and installation works of outdoor lighting infrastructure in 2016-2018 valued at least at GEL 1.5 million. In addition, a bidder should have had experience of specifically New Year’s lighting works valued at not less than GEL 700,000. The enquiry of Transparency International Georgia showed that Adjarganateba is the only company in Adjara with similar experience. As a result, only this company participated in the tender and offered its services to the procurer for GEL 428,423, the exact initial price that was set by the procurer.

In its 2016-2017 reports, the State Audit Office highlighted tenders announced for the installation and service of the Batumi City Hall outdoor lighting network, where competition was restricted. It revealed the facts when Batumi City Hall shaped the terms of the announced tenders in a way to favor Adjarganateba and restrict competition.

Transparency International Georgia has found out that despite the recommendations of the State Audit Office, Batumi City Hall continues to practice favoring one company and does not impose sanctions on Adjarganateba for non-compliance. 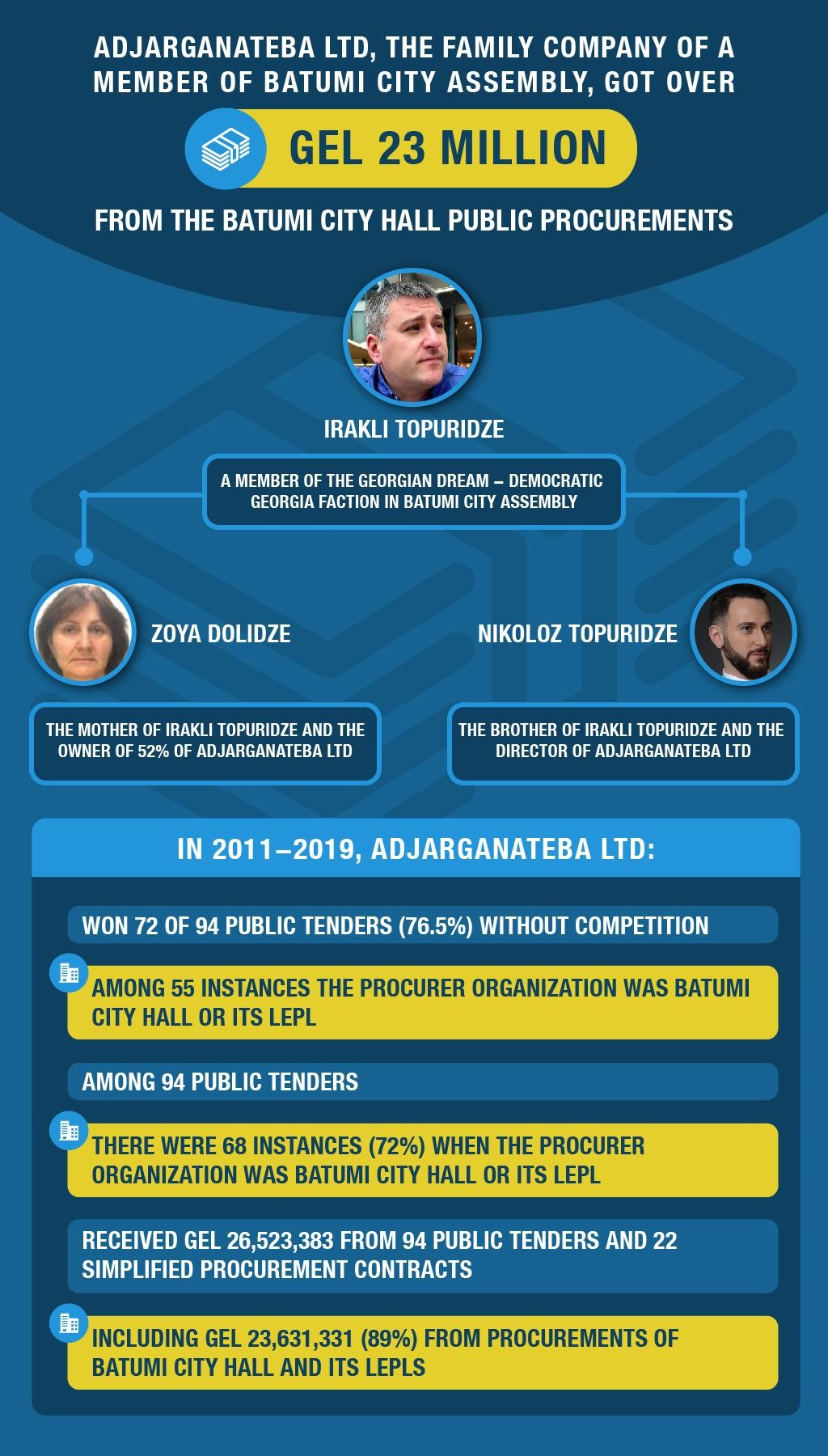 Adjarganateba LTD was registered in 2010. The director and owner of 52% of the company was Tamaz Topuridze, a United National Movement member of the Batumi City Assembly. When Topuridze passed away, his wife Zoya Dolidze inherited his company shares. Nikoloz Topuridze, the son of Tamaz, became the director of the company. Irakli Topuridze, the brother of Nikoloz, has been a member of the Georgian Dream-Democratic Georgia faction in Batumi City Assembly since 2017. 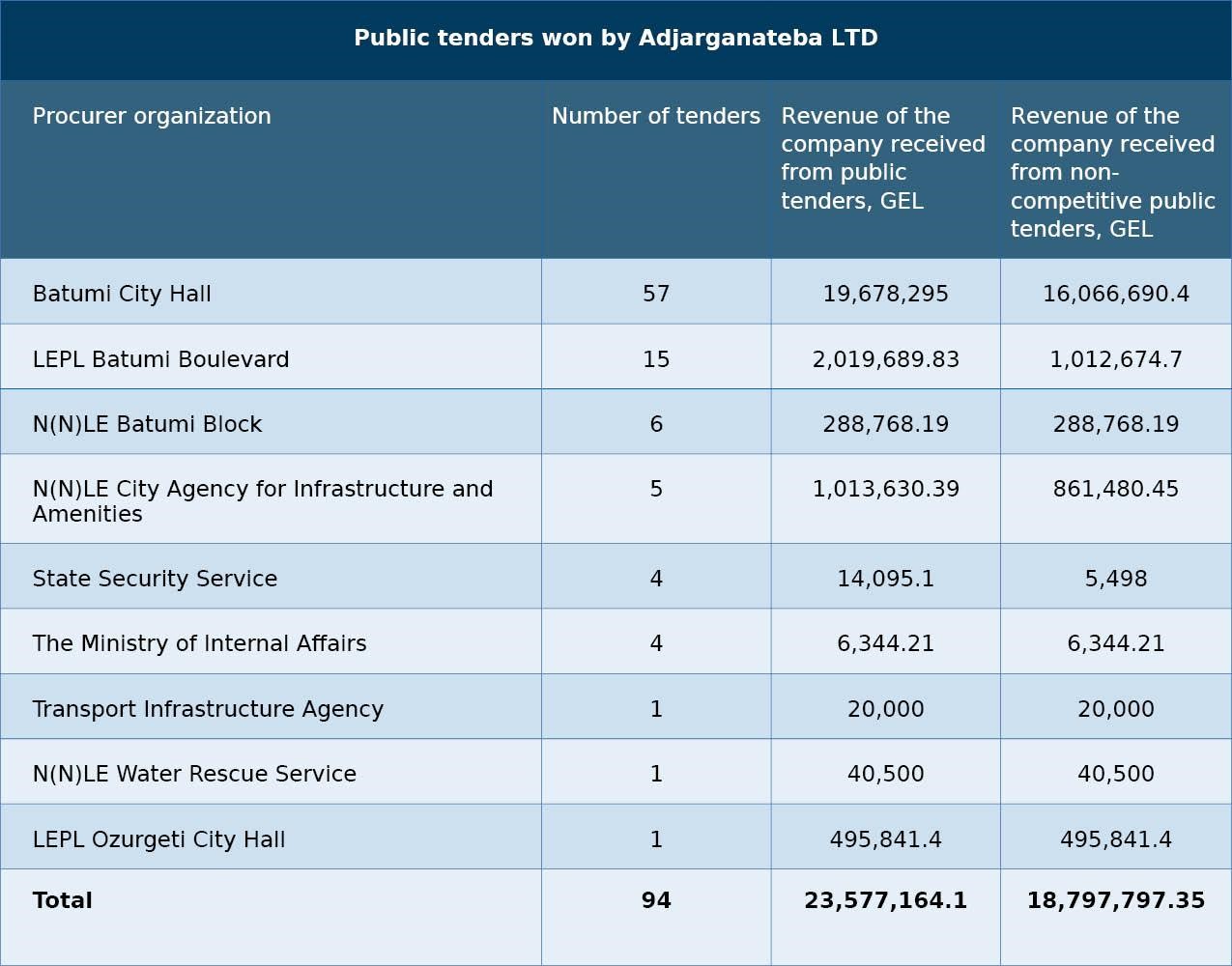 The State Audit Office found that in none of the months of 2016 Adjarganateba could provide Batumi City Hall with services required by tender documentation. However, for unknown reasons the contract with the supplier was not terminated and in contradiction of contract provisions, the company was not fined by GEL 270,200 (pp. 25-26). A similar problem is mentioned in the 2017 report - where the State Audit Office also discusses non-compliance of the company with the contract obligations and the City Hall's failure to fine it by GEL 731,400 (p. 19).

On 3 July, 2019, Transparency International Georgia requested public information from N(N)LE City Agency for Infrastructure and Amenities. According to the letter provided by the Agency, in 2016-2019, city infrastructure works caused problems with some lighting sets, while facade-lighting sets require renovation, which is not the responsibility of Adjarganateba. The necessity for renovation of these lighting sets is due to the expiration of the warranty period. As for other turned off lights, service of such lights was not required by monthly delivery-acceptance certificates, thus the company was not penalized for non-compliance. The State Audit Office does not find this argument relevant.

Batumi City Hall also ignored the State Audit Office's recommendations on enhancing a competitive environment in tenders: in 2018-2019, Adjarganateba won six tenders of Batumi City Agency for Infrastructure and Amenities, four of which were non-competitive. Although, according to the Public Procurement Agency, there are several lighting service providers in Adjara (Meokhi LTD, Mardi LTD, Gungli LTD, Gelmar LTD, Mshenebeli 5 LTD, etc.) that participate in public tenders, they usually do not bid in public tenders of Batumi City Hall and its (N)LE City Agency for Infrastructure and Amenities. This happens because the mentioned procurers discourage many potential bidders by requiring many years of specific experience in large-scale lighting works. 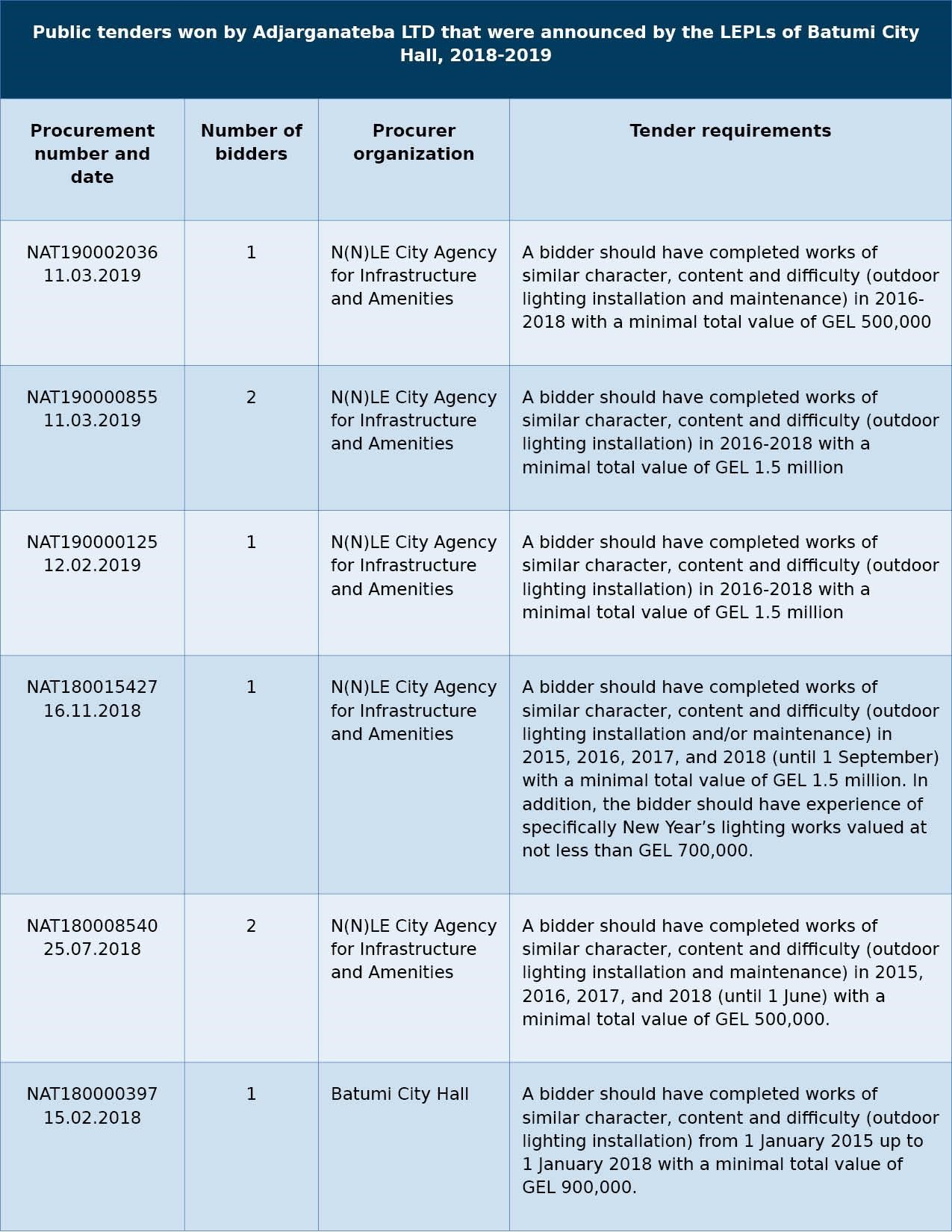 The table shows that the bidding procedure announced on 16 November 2018 also specifies a required experience that is likely to limit competition - the tender requirements state that the bidder should have completed the maintenance, operation and installation works of outdoor lighting infrastructure in 2015-2018 valued at least at GEL 1.5 million. In addition, the bidder should have had experience of specifically New Year’s lighting works valued at not less than GEL 700,000. As a result, as it was expected, only one company - Adjarganateba - participated in the tender.

According to Transparency International Georgia:

·       The Prosecutor's Office and the Anti-Corruption Agency of the State Security Service should start investigating the possible facts of adjusting tender conditions to a particular company;

·       In the nearest future, Batumi City Hall should follow the recommendations of the State Audit Office. Therefore, it should fine Adjarganateba for non-compliance with contractual obligations and establish effective control over the work carried out by the contractor.