The Government of Georgia (GoG) has submitted a draft law on Georgia’s State Budget of 2020 to the Parliament. Transparency International Georgia (TI Georgia) presents a brief assessment and recommendations on this project.

2.Receipts[1] of the State Budget

GEL 120 million is planned to be received from privatization (Disposal of Non-financial Assets), which is GEL 50 million more than the 2019 plan. GEL 302 million will go into the budget from the Decrease in Financial Assets, which includes repayment of previously issued loans and use of the budget remainder[2]. 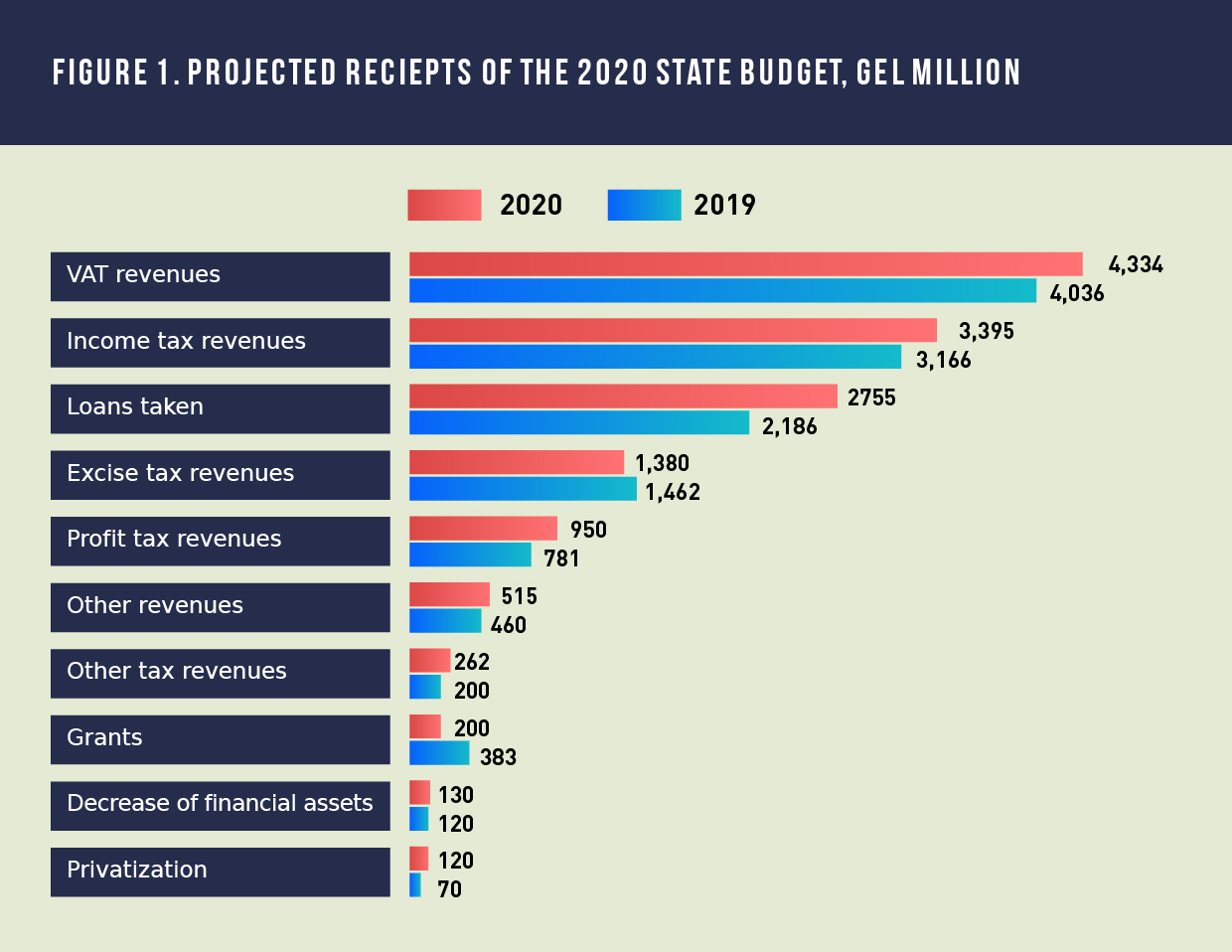 3.Expenditures[3] of the State Budget

Current budget expenses will increase by GEL 1 billion, with the largest share - GEL 451 million spent on social expenses. A total of GEL 4.3 billion will be spent on it.

Operating balance[4] of the state budget for 2020 is projected at GEL 365 million, compared to GEL 847 million of the 2019 budget. Such a decrease in operating balance means an increase in the share of current spending and a reduction in government savings, which is undesirable for sustained long-term economic growth and can be attributed to short-term, one-year effects.

The decline in operating balance will lead to a deterioration in the overall budget balance[5]. The negative balance of the budget in 2020 will be GEL 1.7 billion, while in 2019 it is GEL 1.2 billion. By 2020, the negative budget balance will stand at 3.5% of the projected GDP. The similar indicator in the 2019 budget is 2.8%.

Consolidated budget spending and Acquisition of Nonfinancial Assets are projected to be 30.6% of GDP, but according to the December 2018 amendment to the Law on Economic Freedom, if it exceeds the 30% ceiling, it is no longer considered a violation. Prior to 2019, 30% of GDP was set as the ceiling for budget expenses and Acquisition of Nonfinancial Assets. 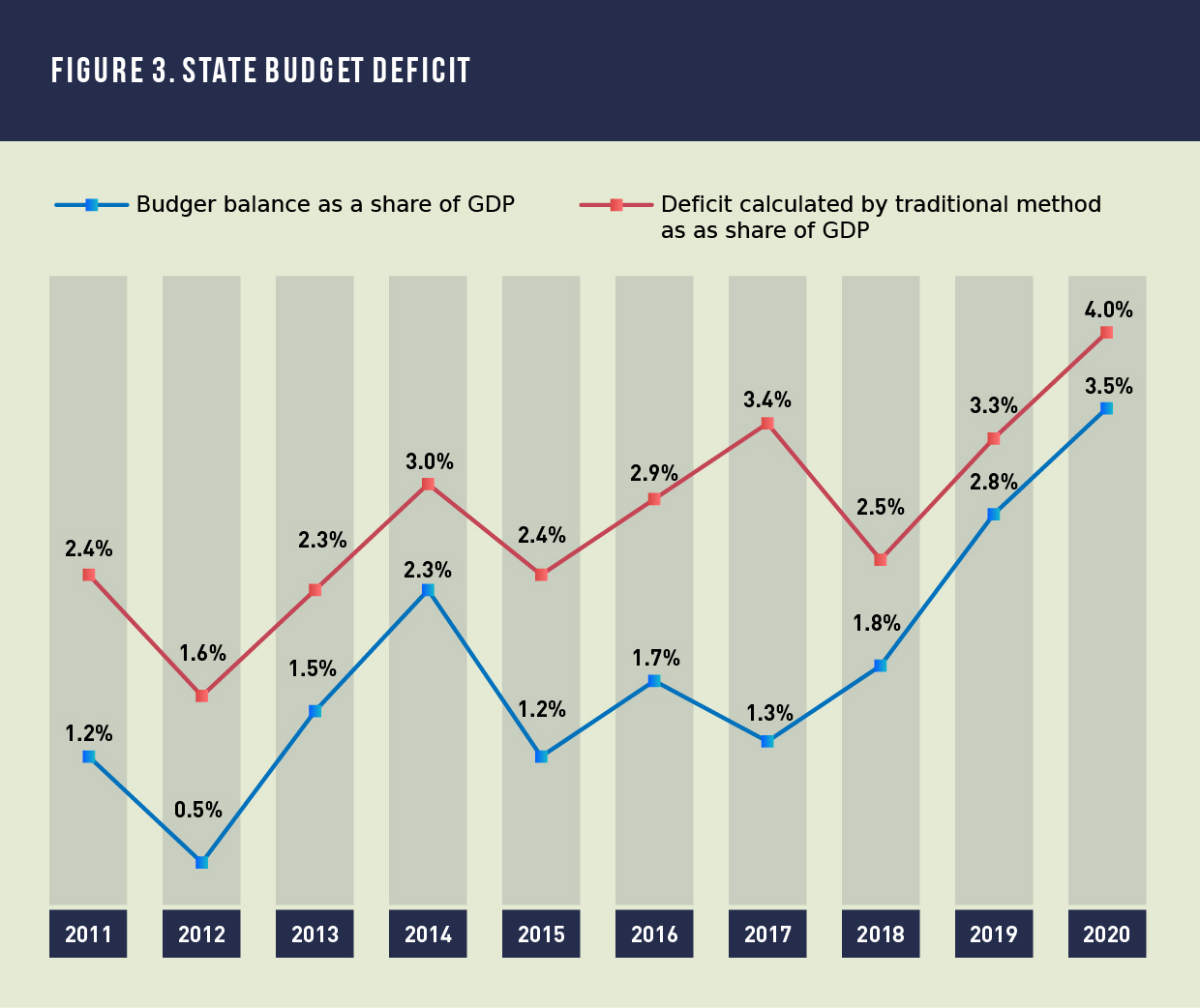 Along with the depreciation of GEL, the higher indebtedness is caused by the increased budget deficit. The GoG does not set a goal to decrease the public debt in the process of budget planning. According to the Socio-economic Development Strategy (Georgia 2020) adopted by the GoG in 2013, Georgia's public debt should have been less than 40% of GDP by 2020. According to the Public Debt Management Strategy for 2019-2021 approved by the Ministry of Finance this year, the public debt should be 41.4% of GDP in 2019 and 41.5% of GDP in 2020. According to the draft state budget of 2020, the government debt will be 44.3% of GDP by the end of 2019 and 45% of GDP by the end of 2020. 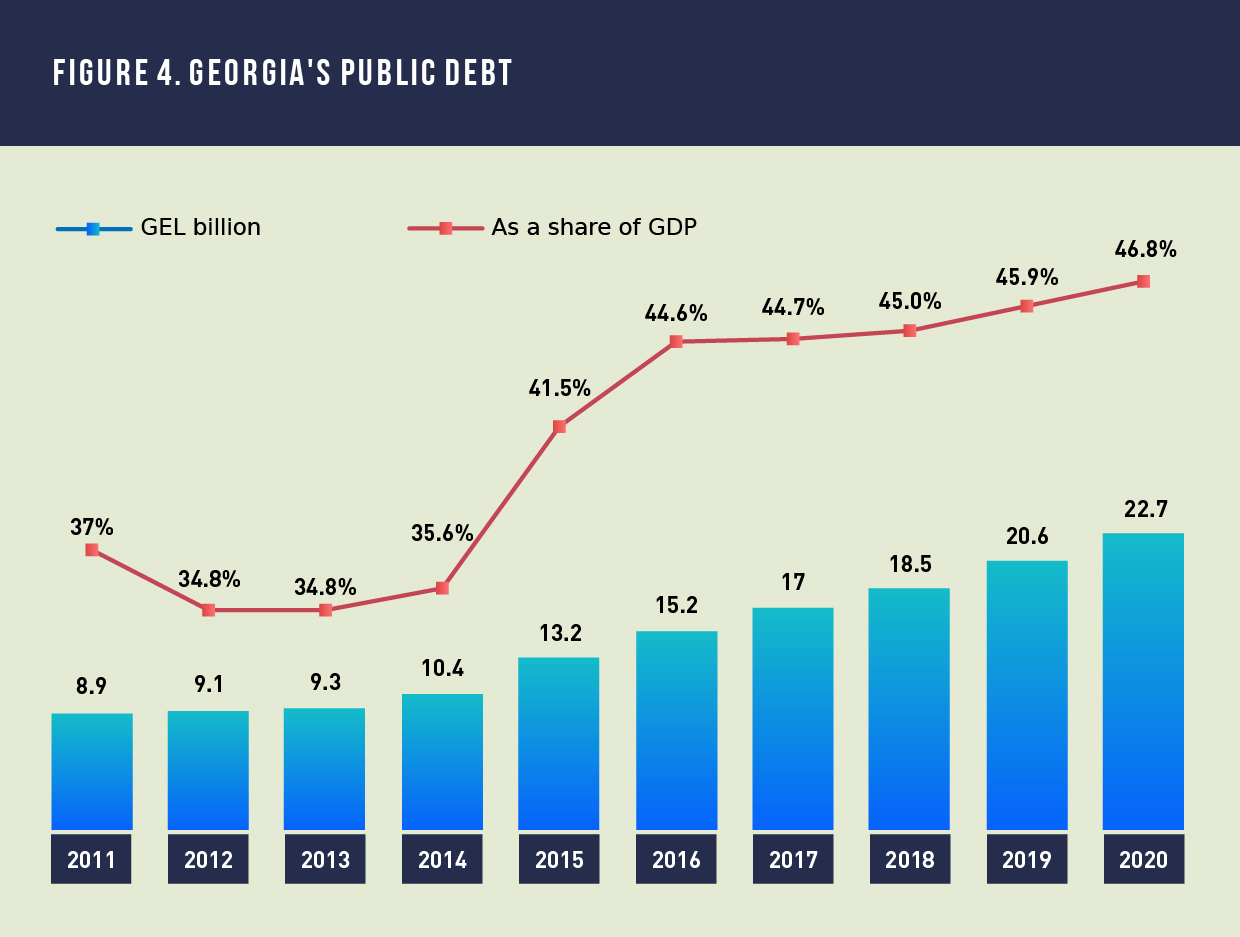 5.Public institutions and budgetary programs, which will have a significantly higher/lower funding

According to the 2020 draft state budget, funding of the Ministry of Internally Displaced Persons from the Occupied Territories, Labor, Health and Social Affairs will most significantly increase. The added amount will mainly cover social expenses. From January 1, the state pensions for those who reached the retirement age and social assistance for persons with special needs, including persons under 18 years of age, will increase by GEL 20. From July 1, the social assistance for the above-mentioned persons and pensions for persons 70 years of age and older will increase by an additional GEL 30 GEL. In 2020, GEL 305 million more will be spent in this direction than in 2019. State funding on the priority areas of healthcare will increase by GEL 36 million and on ambulance service - by GEL 38 million. The funding allocated for medicines for chronic diseases will decrease by GEL 10 million. In 2019, GEL 20 million was allocated for this program, but only GEL 3.4 million was spent in 9 months.

Similar to 2019, the funding for the Universal Healthcare Program will be GEL 754 million. However, during the first three quarters of 2019, the average monthly expenditure on this program was GEL 66 million. It means that this year the Universal Healthcare Program will need approximately GEL 40 million of extra funding. Accordingly, extra funding may also be required in 2020. The situation is similar in other public health programs, where 42% more was spent in the three quarters of this year. In the 2020 draft budget, these expenses will be GEL 4 million less in 2019.

From July 1, 2020, the salaries of ambulance and village doctors will increase by GEL 100, which will require an additional GEL 39 million.

The budget of the Ministry of Education, Science, Culture and Sports is increasing by GEL 132 million and will amount to GEL 1.6 billion. The additional funding mainly goes to schools. More specifically, from September 1, 2020, the salaries of senior, leading and mentor teachers of public schools will increase by GEL 150. By the way, since October 1, 2019, teachers of the same category have already received salaries increased by GEL 150. In total GEL 140 million will be spent on teachers’ salary increase in 2020. Moreover, from September 1, 2020, the salaries of kindergarten employees will increase by GEL 100, with an additional GEL 15 million planned to be spent.

Higher education funding will be reduced by GEL 27 million. The decrease is planned in scholarships. The reason for this reduction is not mentioned in the draft law.

The budget of the Ministry of Internal Affairs increases by GEL 28 million, which is due to an increase of salaries (by GEL 125) of firefighters, police officers and those with equal status. This change will be enacted from July 1, 2020.

Co-financing of the defined contribution pension scheme increases by GEL 110 million and will amount to GEL 200 million. 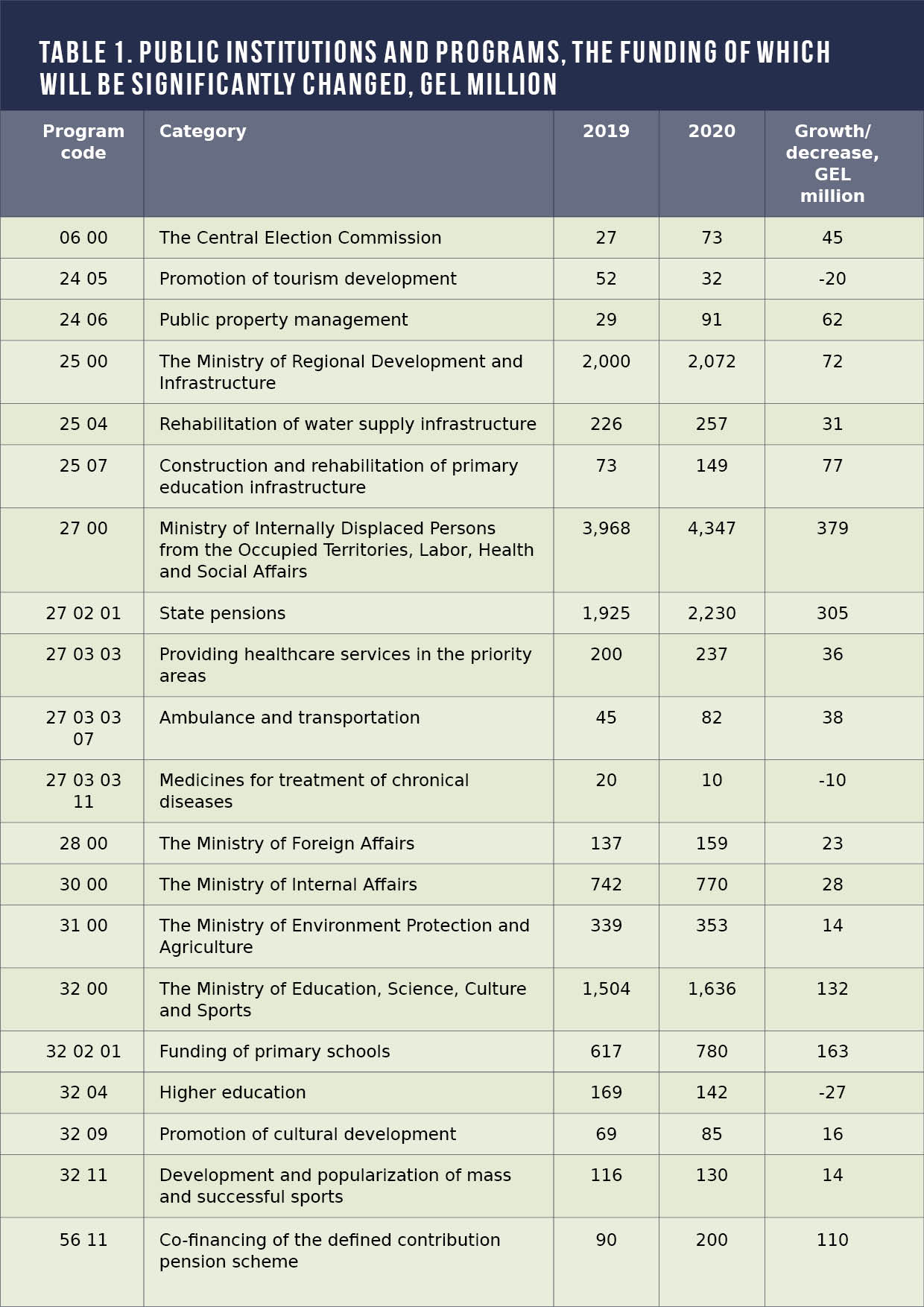 In terms of program budgeting there also are problems in the 2020 draft state budget. Some programs including large ones are poorly designed. The consistency and interoperability of the objectives of the programs and sub-programs, the final and intermediate results and the evaluation indicators are particularly problematic. Some programs and sub-programs are not intended to address the problem, therefore, do not fit the purpose and essence of program budgeting.

An indication of an inappropriate approach to program budgeting is that the expected outputs and indicators of the budget programs are still included in the budget annexes and are not in the main text of the Budget Law. For the last few years, the State Audit Office has been recommending to put the expected results and indicators in the main text of the law to strengthen the policy-oriented budgeting, instead of the current approach, in which the main objective of the budgetary policy is to fulfill plans and spending of allocated funds.

[1] Receipts are the sum of revenue, disposal of non-financial and financial assets, and newly taken loans. It includes all funds that go to the budget while the revenue includes only tax revenues, grants and other specific sources of income.

[2] The remainder of the budget is the sum of the money unspent from previous years and the accrued interest.

[3] Expenditures are the sum of expenses, increase of non-financial and financial assets and repayments of previously taken loans. It includes any funds that go out of the budget, while the expenses include only funds spent for specific purposes, such as administrative, social, education, etc.

[4] Operating balance is the difference between budget revenues and expenses

[6] The consolidated budget is the sum of state, autonomous republican and local self-government budgets.

[7] Since the total budget balance does not fully cover all budget revenues and expenditures, in the traditional sense, the budget deficit means how much the budget has been reduced by using new debt and budget remainder.

[8] Baseline indicator: 100% of public schools are provided with voucher funding to fully implement the national curriculum.