Gelvas Geladze, the advisor on infrastructure issues to the Mayor of Akhaltsikhe, Zaza Melikidze, is winning tenders in Akhaltsikhe municipalities without any competition with his company - Mshenebeli 2004. Since 2014, when Geladze was appointed to a position in the self-government, his company revenues amounted to 4 096 286 GEL, out of which 1 103 065 GEL (about 27%) was secured by Mshenebeli 2004 through procurement contracts in Akhaltsikhe municipalities. Gelvas Geladze was also a member of the Bidding and Admission Committees, as well as the supervisor for ongoing projects and also a contractor. More than half of this amount - GEL 651 420 - was secured through tenders with no competition.

"Mshenebeli 2004" became more active in bidding for tenders in Akhaltsikhe municipalities (both self-governing cities and united) after its director, Gelvas Geladze, became a public official in the local self-government. From July 2014 to October 2017, he was the head the Department of Urban Planning and Urban Development at the Akhaltsikhe City Hall. Since December 2017, when the self-governing city was abolished and merged with the self-governing community, Zaza Melikidze, the mayor of Akhaltsikhe, appointed him to the position of an advisor on infrastructure matters.

In both municipalities, he was and is responsible for overseeing infrastructure projects, evaluating and delivering the work performed. Moreover, in 2014-2017, Gelvas Geladze was a member of both the tender and admission commissions in the self-governing city. Since early 2018, he has also been a member of the Admission Committee on Infrastructure as an advisor to the Mayor.

Gelvas Geladze also oversees the work carried out by his own company, Mshenebeli 2004. He owns a 20% stake in the company and was its director for 10 years before his appointment to the Akhaltsikhe City Hall.

Prior to the appointment of Gelvasi Geladze as mayor, Mshenebeli 2004 had won only five tenders in Akhaltsikhe municipality during four years for a total of GEL 253 719. After six years of his appointment, the company won 15 tenders and contracts totaled 924 866 GEL (the remaining 178,199 GEL was awarded through simplified procurement). In 10 out of 15 cases, Geladze’s company was the only bidder, and in 3 cases its competitors were disqualified and contracts were signed with Mshenebeli 2004.

Amounts of money received through tenders by Mshenebeli 2004 in Akhaltsikhe Municipalities from 2015 to Present: 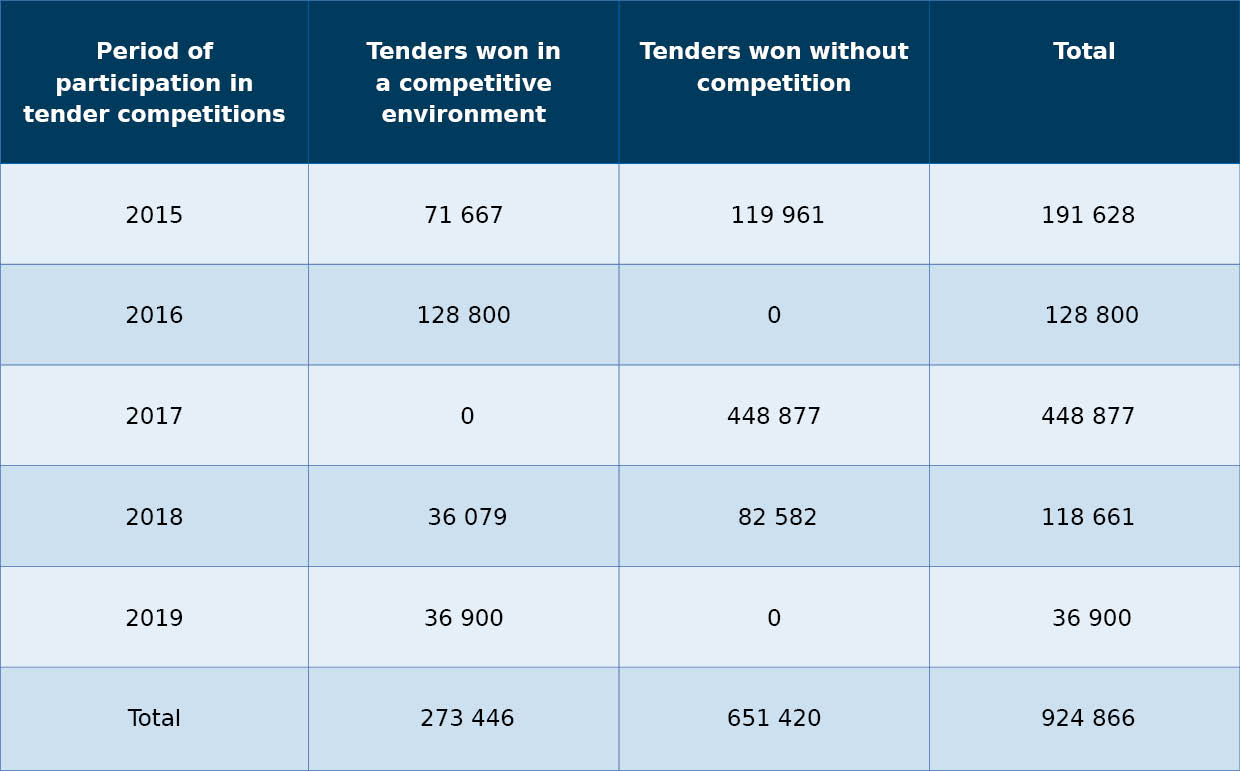 In total, from 2014 to date "Mshenebeli 2004" has won 46 tenders. 22 tenders were won in Samtskhe-Javakheti municipalities (excluding Akhaltsikhe municipalities), in other public agencies - 9. Out of 46 tenders, the company was the only bidder in 25 cases, while in 14 cases the competitors were disqualified. “Mshenebeli-2004” received 3 803 335 GEL through tender contracts.

Conflict of interest (on paper only)

In 2014-2017, Gelvas Geladze was directly involved in the bidding commission of Akhaltsikhe, a self-governing city, which was discussing the disqualification of his company's competitors. Prior to signing a contract with Mshenebeli 2004, he stated that he had a conflict of interest over the holding of a 20% stake in the company. The conflict of interest document was also filled in cases when his company was the only bidder and when the municipality signed the acceptance-delivery agreement with the company.

However, he, along with Akhaltsikhe Mayor Zaza Melikidze, is reviewing the work processes carried out by his company. In addition, Geladze attends almost all meetings with Melikidze's representatives at the Akhaltsikhe City Hall with representatives of construction companies, where they will see timelines, quality of work, and other problematic issues. Among them, of course, the projects of "Mshenebeli 2004".

Transparency International Georgia calls on the State Security Service's Anti-Corruption Agency and the Office of the Prosecutor General to examine each tender won by Mshenebeli 2004 and determine whether they have been announced in favorable terms to the LLC, as well as investigate any specific signs of corruption in the work of Gelvas Geladze, the advisor to the Mayor of Akhaltsikhe.