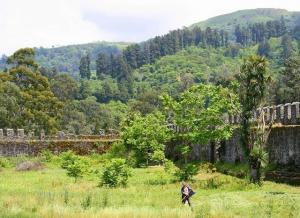 The land ownership certificates of 221 citizens residing in Gonio, a settlement on Georgia’s Black Sea coast, were abolished on November 9, 2010. The Property Rights Commission of the Khelvachauri Municipality announced on that day that the lands were confiscated because they fell in a resort area. The commission stated in its decision that the land plots should never have been alienated (i.e. transferred from governmental to private ownership) in the first place, according to the resort area strategic development plan. According to the relevant law the alienation of the land especially within the resort area has to be made according to the strategic development plan. Unfortunately in Gonio nobody ever has heard about any kind of plan that would have regulated strategic development of the resort area. However, it was in fact the Property Rights Commission itself that transferred the land in question to private owners. In 2008, just before the last presidential election, Mr. Levan Varshalomidze, the head of the regional government, personally awarded the certificates in a festive atmosphere in front of TV cameras. According to presidential order No. 655 of 2005, Gonio is indeed listed as one of the resort areas of Georgia, making the land there ineligible for transfer into private ownership. The question is whether the Property Rights Commission knew that these lands were part of a resort area and hence ineligible for alienation when the original transfer was made in 2008. Another interesting fact is that according to a joint decree of the Ministry of Culture and Monument Protection of Georgia and the Ministry of Economic Development of Georgia on July 17, 2006, Gonio fortress and its nearby territories (including the land the Property Rights Commission later transferred) were declared part of a cultural heritage zone. Alienation of the land plots in this zone is prohibited by law. Therefore, at the time the Property Rights Commission made the initial transfers in 2008, the land that was transferred was protected from alienation by two separate legal regimes. The Property Rights Commission’s recent ruling makes it clear that the initial transfer of this land was illegal; however, it was the Commission itself that made the transfer, and this subsequent reversal of its own decision has caused harm. Enver Iremadze, a local citizen, sold his apartment after he was awarded a land plot in 2008, hoping he could build a house on the legalized land plot and host tourists. Some citizens have sold the plots they were given to bona fide buyers (purchasers in good faith), who built houses there that eventually were dismantled by the Urban Planning Department.

In this case the Urban Planning Department has indicated a different reason. In particular, it appeared that some of the land plots are located in the zone of the cultural heritage of the Gonio-Apsaros fortress that is located near the Gonio settlement. Strict building rules are applied in such areas. At this time, the fate of those citizens enjoying the status of bona fide owners and/or those who have already built houses is unknown. So far there has been no indication of any compensation. Unfortunately, most of the affected citizens are not aware of their legal rights and have already missed the one month period set by law to appeal the decision of the Property Rights Commission. However, the fact that the population of Gonio has spoken out about the government’s illegal actions is remarkable. In other cases, people tend to be quiet, because they are scared of even more severe punishment if they speak out, and relinquish their property without legal battle. Transparency International Georgia, along with three other non-governmental organizations, is part of the Coalition for Property Rights Protection, funded by Open Society Georgia Foundation. The Coalition will provide the population of Gonio with legal and other assistance.