Transparency International Georgia continues to research the business interests of the relatives and associates of Anzor Bolkvadze, a member of the Georgian Parliament elected from the Georgian Dream as a majoritarian in highland Adjara.

None of our findings regarding the activities of Anzor Bolkvadze published in 2020 have received a response from the relevant agencies. However, new circumstances have emerged that revealed additional corruption and conflict of interest risks.

This study summarizes the income received by the majoritarian MP's family members, the companies belonging to his relatives, and associates from public procurement, when Bolkvadze was a majoritarian MP, which we think depicts the MP's influence. 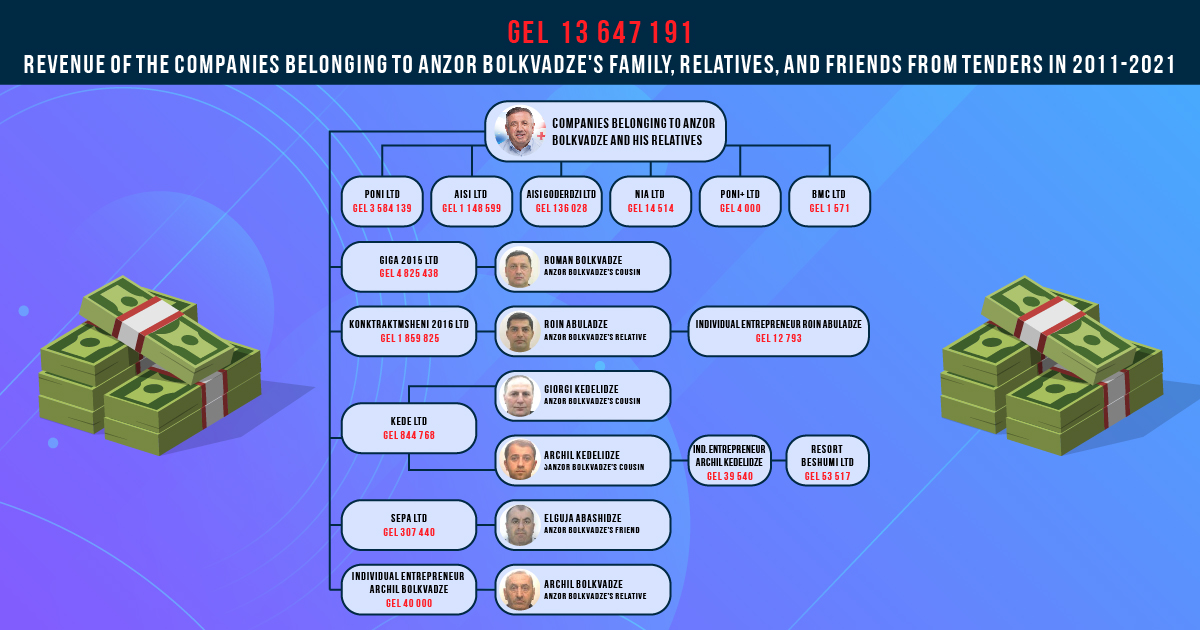 Revenues of the companies belonging to Anzor Bolkvadze's family members, relatives, and associates from state procurements in 2011-2021

With Anzor Bolkvadze’s engagement in the political processes since 2008 his family members, relatives and friends have gradually started to establish companies, the income of which has increased mainly at the expense of state procurements. These companies receive state procurements from the subdivision of the Government of Adjara - the Roads Department and from the municipalities in Anzor Bolkvadze majoritarian district. It should be noted that Anzor Bolkvadze's son, Roland Bolkvadze, participates in the tender commission of the Road Department and in none of the protocols studied by the organization he states a conflict of interest when the contract is to be signed with the company of his relative or a family member. The abundance of uncompetitive tenders of the same companies with the Roads Department is also noticeable. 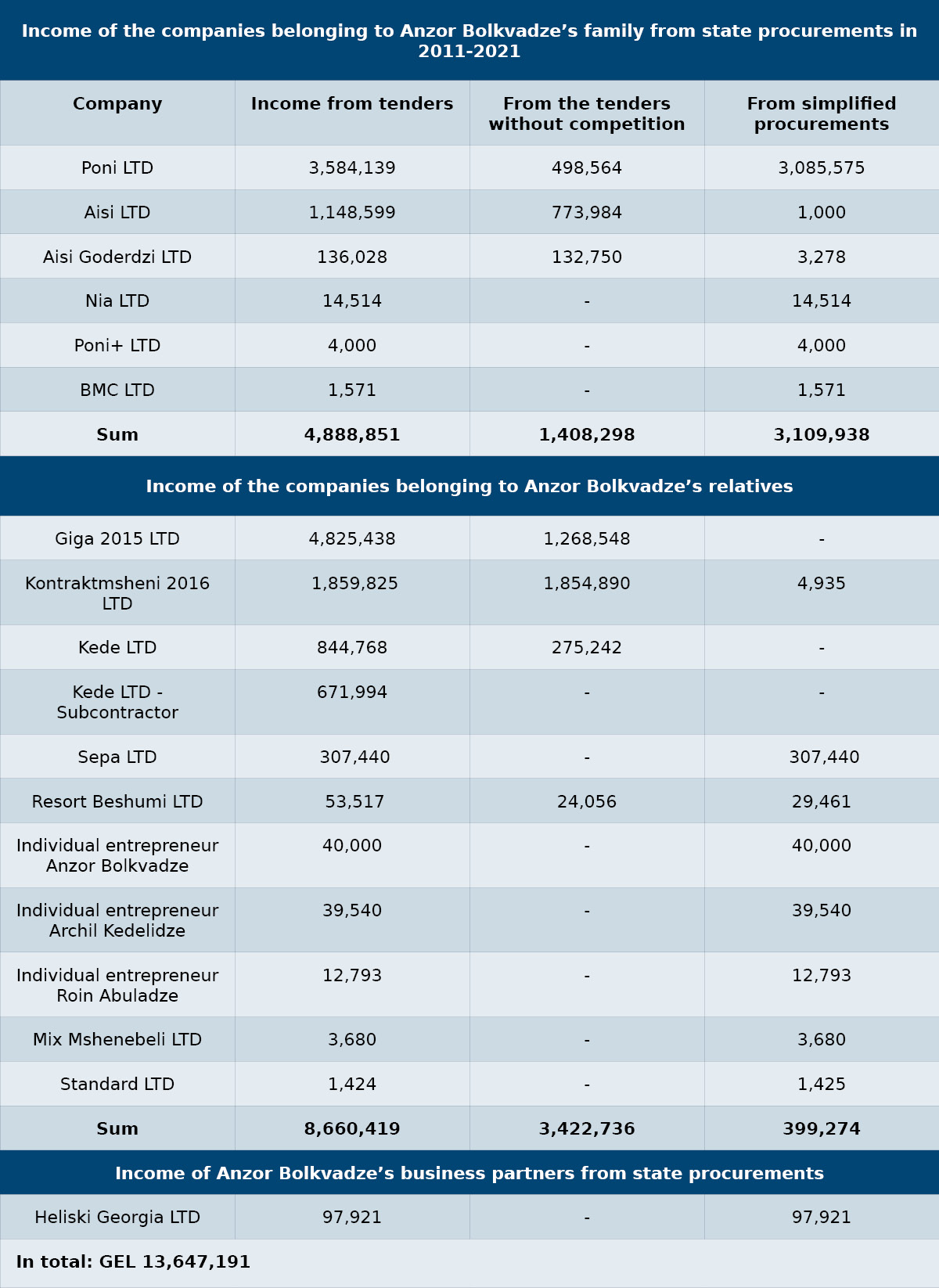 The actions of the  Majoritarian MP in response to our research

Archil Bolkvadze - person cloe to Anzor Bolkvadze, Director of "Dinamo Batumi", financier and auditor of the companies related to the majoritarian MP

Transparency International Georgia wrote that the majoritarian MP did not transfer the 50% shares of Goderdzi Development to another person, which is a violation of the law.[1] Anzor Bolkvadze handed over those shares to Archil Bolkvadze within a few hours after the publication of our research. Archil Bolkvadze is the director of Dinamo Batumi LTD, owned by the Autonomous Republic of Adjara. According to the club's website, Bolkvadze combines directing with finance.

Due to the heading of the company owned by the Government of the Autonomous Republic, Archil Bolkvadze is obliged to submit a declaration. In the 2019 study, Transparency International Georgia revealed the violation of the law. In particular, Archil Bolkvadze did not indicate the real estate owned by his wife in the 2018 declaration. Despite our appeal, the Civil Service Bureau did not study Bolkvadze's declaration.

Entrusting 50% of the shares owned by Anzor Bolkvadze to Archil Bolkvadze isn’t compatible with the law, because, as mentioned above, Archil Bolkvadze is a public official[2] who is prohibited to managing his own business shares and is obliged to entrust them to a third party[3] according to the law. Accordingly, it is clearly incompatible with the law to entrust the right to manage to such a person. In addition, the management of the enterprise's shares is essentially equated with entrepreneurial activity and is prohibited by officials according to the law on conflict of interest and corruption in public service.

Being a financier of the club is not the only activity that Archil Bolkvadze combines with the director of "Dinamo Batumi". As of February 23, 2017, he has been officially registered in the State Register of Auditors.

According to the website of the State Procurement Agency, Archil Bolkvadze provided audit services of up to GEL 7000 to Batumi municipal sports and general education schools in 2017-2021. In total, in 2018-2020, in parallel with being a director of "Dinamo Batumi", according to the declarations, he received GEL 40,000 from private auditing activities. By law, such entrepreneurial activity is prohibited for an official. Among the companies for which Archil Bolkvadze prepares audit reports are two companies related to Anzor Bolkvadze's other relatives: Aisi and Kontraktmnsheni 2016. These companies are discussed in a separate chapter.

On June 24, 2020, Transparency International Georgia published a second study on the business interests of Anzor Bolkvadze's relatives and associates. On June 26, the majoritarian sold his shares in Goderdzi Development, which he had previously handed over to Archil Bolkvadze, for 1 GEL to Heliski Georgia LTD, which previously owned 50% of shares of Goderdzi Development. As mentioned in the previous study, the company belonging to Anzor Bolkvadze's partner - Heliski Georgia, received contracts worth up to GEL 98,000 from the Emergency Management Agency in 2017-2018 for the helicopter service.

In 2008, Anzor Bolkvadze was elected as a majoritarian of Khulo from the election bloc "United National Movement - for Victorious Georgia". In 2010, Roland Bolkvadze, the son of a majoritarian, who is currently the head of the Logistics and Infrastructure Maintenance Service at the Adjara Roads Department, received 100% of shares of Poni LTD founded by his father, and the director became Davit Koniadze, an associate of Bolkvadze family. From this period the company wins state tenders and signs high-budget simplified procurements.

For the first time, Poni LTD won the tender of Adjara Roads Department in 2011 without competition. After that, agreements were signed with Khulo Municipality. Later, in 2012, Goderdzi Resorts LTD, which is still owned by the Autonomous Republic of Adjara, started concluding high-budget simplified agreements with Poni. In total, in 2011-2012, Anzor Bolkvadze's family company received GEL 3,584,139 through procurements from the Autonomous Republic of Adjara and Khulo Municipality, out of which 95% came from uncompetitively won tenders and simplified procurements. 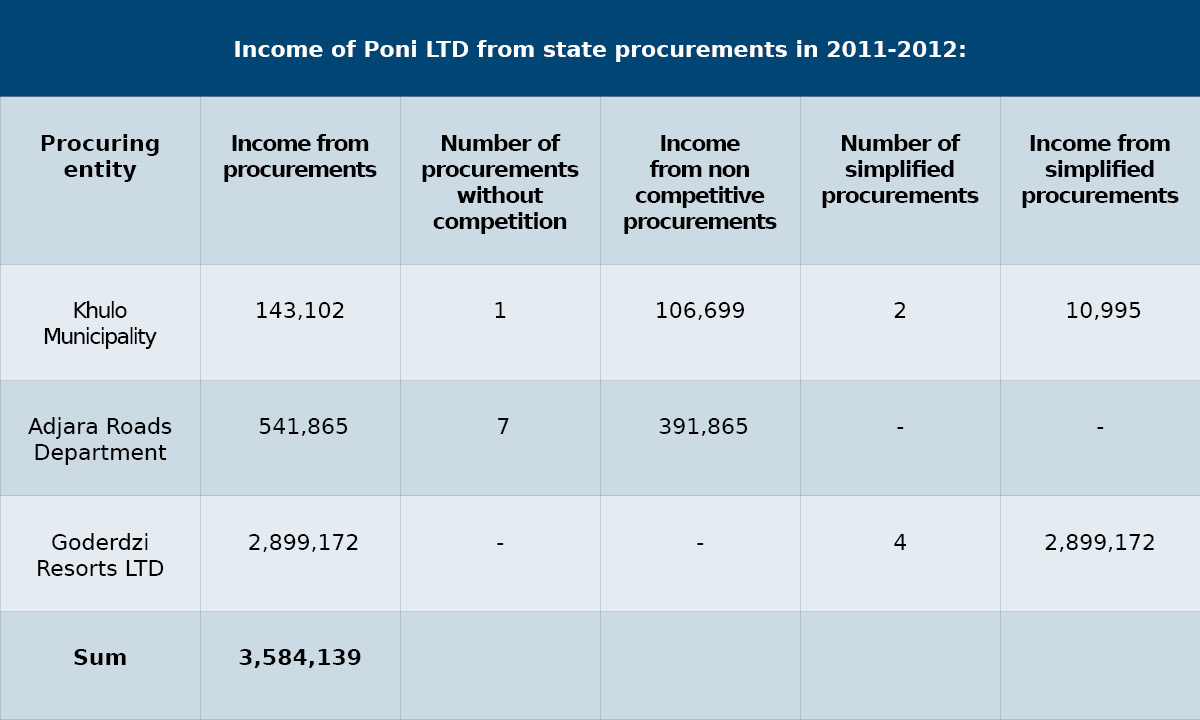 In a study published on June 24, 2020, we provided information to the public on how Giga 2015 LTD, the company that belongs to Anzor Bolkvadze’s cousin - Roman Bolkvadze, benefits from the Adjara Roads Department. In this department, as we have already mentioned  above, the son of a majoritarian, Roland Bolkvadze is the head of the service and a member of the tender commission. At the time of publication of the study, the company had received 84% (GEL 3,252,372) of the revenue from the tenders of the Adjara Roads Department, and the remaining GEL 594,748 from the procurements of the municipalities belonging to Bolkvadze’s majoritarian district (Keda, Khulo, Shuakhevi, Khelvachauri).

Giga 2015 continues the established practice: participates only in the procurement of municipalities of Adjara Roads Department and the municipalities belonging to Anzor Bolkvadze’s majoritarian district - from June 24, 2020 to date has won 11 tenders, including 3 at the expense of disqualification of competitors, and received GEL 1,000,263 in total. In 11 out of 10 cases, the buyer is still Adjara Roads Department, and in one case - Khelvachauri Municipality.

Following the publication of the previous research, the family company belonging to Anzor Bolkvadze’s cousin - Kede, has not resumed participation in public procurements. Our research revealed that in 2017-2018, Kede received up to GEL 845,000 for the construction works in the municipalities of Adjara, 32% of which comes from non-competitively won tenders.

While working on this study, we came across to another circumstance: the company Kede was the subcontractor of the company B&B, which won the tender announced by the Khulo Municipality in 2016 for the rehabilitation of the water system in resort Beshumi. The tender document uploaded on the website of the State Procurement Agency does not include the contract concluded with the subcontractor Kede. However, Kede itself provided this information  to Khulo Municipality as proof that it met the conditions of the tender announced in 2018.

In 2016, Khulo Municipality set the estimated cost of the water rehabilitation tender in Beshumi at GEL 792,716. B&B bid to carry out this work for GEL 717,229 and won the tender. The document published on the website of the State Procurement Agency states that the company belonging to Bolkvadze’s relative - Kede LTD received GEL 671,994, or 94% of the amount specified in the procurement contract as a B&B subcontractor.

In these conditions, the questions arise: was the participation of B&B in the tender announced for the rehabilitation of the Beshumi water system formal and were the interests of Bolkvadze's relatives actually hidden behind the company? The suspicion is strengthened by the fact that when signing the subcontractor agreement with B&B, Kedelidze’s company Kede not only has not won any state procurement, but has never participated in it.

Archil Kedelidze, the son of Bolkvadze's cousin, was an individual entrepreneur before becoming the director of Kede LTD and signed simplified procurement agreements with Khulo Municipality in 2012-2014, during which time Kedelidze received GEL 39,540. In 2014, Archil Kedelidze became the director of the hotel "Resort Beshumi" owned by Anzor Bolkvadze's family, and his brother, Giorgi Kedelidze, received 100% of shares in the company with GEL 1 from Semie Bolkvadze, Archil Bolkvadze's mother. Semie Bolkvadze became the owner of the mentioned shares after the death of her husband.

Kedelidzes started earning revenue from public procurements in Khulo from Resort Behumi - the company received GEL 53,517 in 2012-2013 through non-competitive tenders and simplified procurements for placing young people participating in various programs of the Autonomous Government and municipalities in the resort.

In the study published in June 2020, we mentioned that Anzor Bolkvadze's daughter-in-law, Guranda Gobadze, transferred her shares in Aisi to Roin Abuladze, another business partner and relative of the Bolkvadze family, free of charge. After that, Aisi won 11 tenders worth GEL 1,148,599 from the Roads Department of Adjara and Khulo Municipality, including GEL 773,984 (67% of the revenue) from 6 non-competitive tenders.

Following the publication of the survey, Aisi did not participate in public procurements anymore, although another of Roin Abuladze's companies, Kontraktmsheni 2016, became more active in the high-budget procurements of the Roads Department and Khulo Municipality. This company, like Aisi, wins tenders for the supply of concrete.

Appearance of Kontraktmsheni coincided with the withdrawal of Aisi from the procurement process - Aisi LTD signed the last tender on April 1, 2020 (procured by Khulo Municipality, amount - GEL 309,345), whereas Kontraktmsheni 2016 received its first high-budget procurement on May 1 of the same year. According to the website of the Procurement Agency, the company that won the uncompetitive procurement provided services to the Adjara Roads Department at a cost of GEL 789,289. Suspicious circumstance in the tender documents is that the procuring entity did not require from the tender participants to have an experience in the similar works (production and pouring of concrete).

As mentioned above, the same auditor related to Anzor Bolkvadze - Archil Bolkvadze provides auditing services to both Aisi and Kontraktmsheni 2016. According to Archil Bolkvadze’s conclusion on May 17, 2018, Aisi confirmed in the state procurement system that it possesses a concrete factory in the village of Vashlovani in Khulo Municipality, the same was confirmed by Kontraktmsheni 2016.

Revenues received by Kontraktmsheni 2016 from non-competitive and simplified procurements: 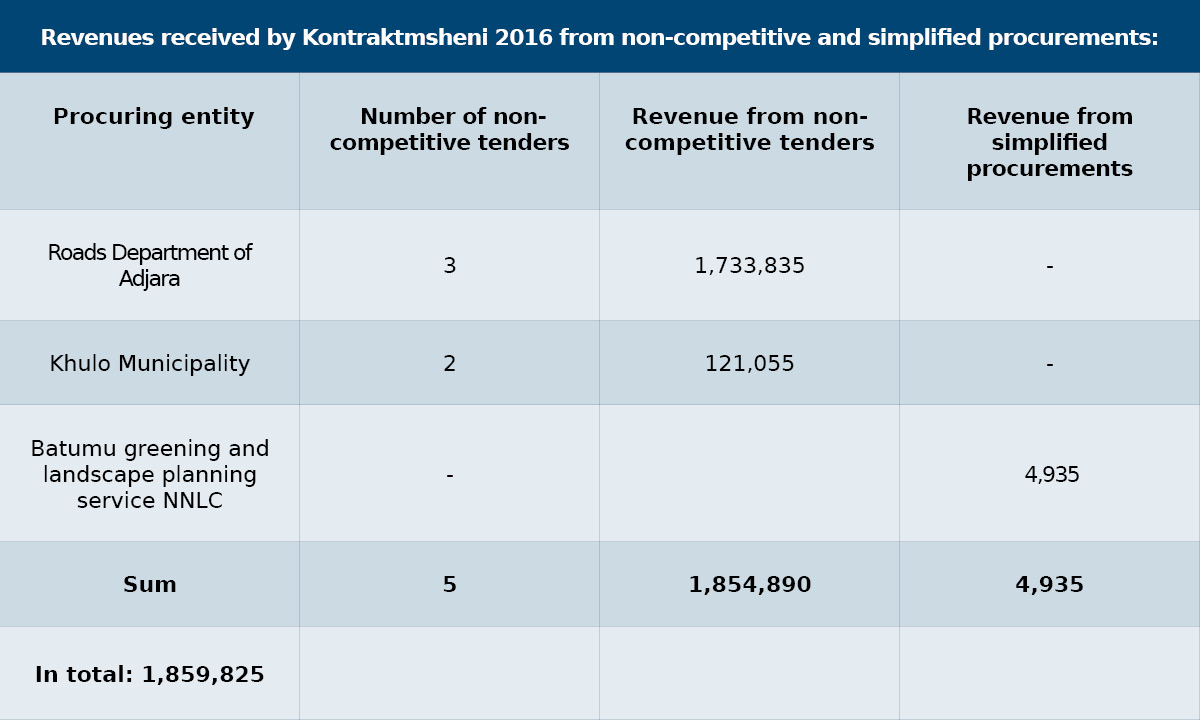 Elguja Abashidze, a former business partner of Anzor Bolkvadze's daughter-in-law, Guranda Gobadze, who is currently the director of Aisi LTD, the company related to the majoritarian MP, owns several companies participating in public procurement. Among them, Sepa LTD is special, because it provides furniture to the Government of Adjara, ministries, organizations subordinated to the ministries, municipal NNLEs, public schools, etc. through simplified procurements. Since 2012, Sepa has received GEL 307,440 out of 298 contracts from the above-mentioned organizations. Other companies belonging to Elguja Abashidze- Mix Mshenebeli and Standard - received a total of GEL 5,105 from simplified procurements.

According to Transparency International Georgia, business activities of Anzor Bolkvadze, a majoritarian MP from Adjara municipalities (Khelvachauri, Keda, Shuakhevi, Khulo), his family members and associates, raises a number of questions on the corruption risks, nepotism and improper use of the MP mandate.

Economic activities/interests of Anzor Bolkvadze and his relatives clearly depict the shortcomings of the mixed electoral system that is currently in place. Some majoritarian MPs take economic and political advantage in their districts, which enable them to employ relatives in public services and to put their affiliated companies in an advantageous position.

Based on the facts given in the study, we call upon:

- The Anti-Corruption Department of the State Security Service to immediately launch an inspection concerning the state tenders, that ended with the victory of the companies Giga 2015 and Kontraktmsheni 2016 in a non-competitive environment;

- The Civil Service Bureau to check the declarations of Anzor Bolkvadze and the Director of Dinamo Batumi - Archil Bolkvadze, and in case of incomplete information act in accordance with the norms established by law.

[1] Law On Conflict of Interest and Corruption in Public Service https://matsne.gov.ge/ka/document/view/33550?publication=77