The State versus the International Black Sea University

The State versus the International Black Sea University

The developments around the International Black Sea University (IBSU) raise doubts that the actions carried by the Government of Georgia are politically motivated. This process can be characterized as concerted and coordinated actions of various branches of the Government which aim to transfer the ownership of the university to persons that suit Government’s interests.

The object of our study was the possibly unlawful actions carried out by various public agencies which demonstrate the existence of high risks of corruption and, also, create an environment conducive to corruption.

The essence and context of the case

The IBSU, Private Demirel College, Shahin School, and ten other school-lyceums comprise the network of Caglar educational institutions, which has been operating in Georgia since 1994. The coordinated attack of various public agencies of Georgia against the educational institutions started after the 2016 Turkish coup d'état attempt, which, according to the Turkish authorities, had been masterminded by Fethullah Gülen, a Turkish religious scholar and politician living in the United States of America.

July 16, 2016 – The Consul General of Turkey, Yasin Temizkan, publicly stated that, due to the links to terrorist organizations of Batumi based Shahin School-Lyceum and other schools of the network, he was going to request the Government of Georgia to close these schools.

July 18, 2016 – The Minister of Education of Georgia, Aleksandre Jejelava, stated that the issue of Shahin School would be discussed at the highest level at the time of the Georgian Prime-Minister’s visit to Turkey.

February 3, 2017 – The Authorization Council of General Education Institutions, by decision no. 4, canceled the authorization of Shahin School-Lyceum, as a result of which 340 students and 117 teachers were excluded from the educational process.

February 8, 2017 – On the basis of an application of the Revenue service, the Tbilisi City Court adopted a ruling to seize the property of the IBSU, Private Demirel College, and Rustavi-based Shota Rustaveli School-Lyceum belonging to the network of Caglar educational institutions, as well as that of the founders of the said institutions: Yusuf Altas, Iasar Simsek, and Cihan Akin.

May 24, 2017 – The police detained Mustafa Emre Cabuk, a teacher and quality manager of Private Demirel College. The Prosecutor’s Office of Georgia stated that Cabuk was being prosecuted by the law enforcement bodies of Turkey and that the Georgian side had no charges against him.

August 29, 2017 – The Authorization Council of General Education Institutions decided to cancel the authorization of Private Demirel College. As a result, about 450 students were left outside the school before the start of the academic year and 102 employees lost their jobs.

According to the information provided to us, in parallel with the developments surrounding the Caglar educational institutions, individuals close to the Georgian authorities informally offered the management of the IBSU to alienate the stakes in the university to a concrete buyer. The management decided to agree with the proposal to sell the university, although, considering their commercial goals, they selected the buyer themselves.

Concerted actions of various public agencies are also confirmed by subsequent developments relating to the IBSU, in particular:

On February 7, the Revenue Service launched a legal dispute against the IBSU, Kontrol LLC, and its founders demanding their recognition as alter egos, [1] and demands that the court recognize the university, its founders, and partners of the founders as alter egos. It was as part of this dispute that the Revenue Service applied to the Tbilisi City Court with a demand to seize the immovable property of the IBSU and the stakes of its founders and of partners of the founders, which the court granted in full.

The IBSU and its partners: 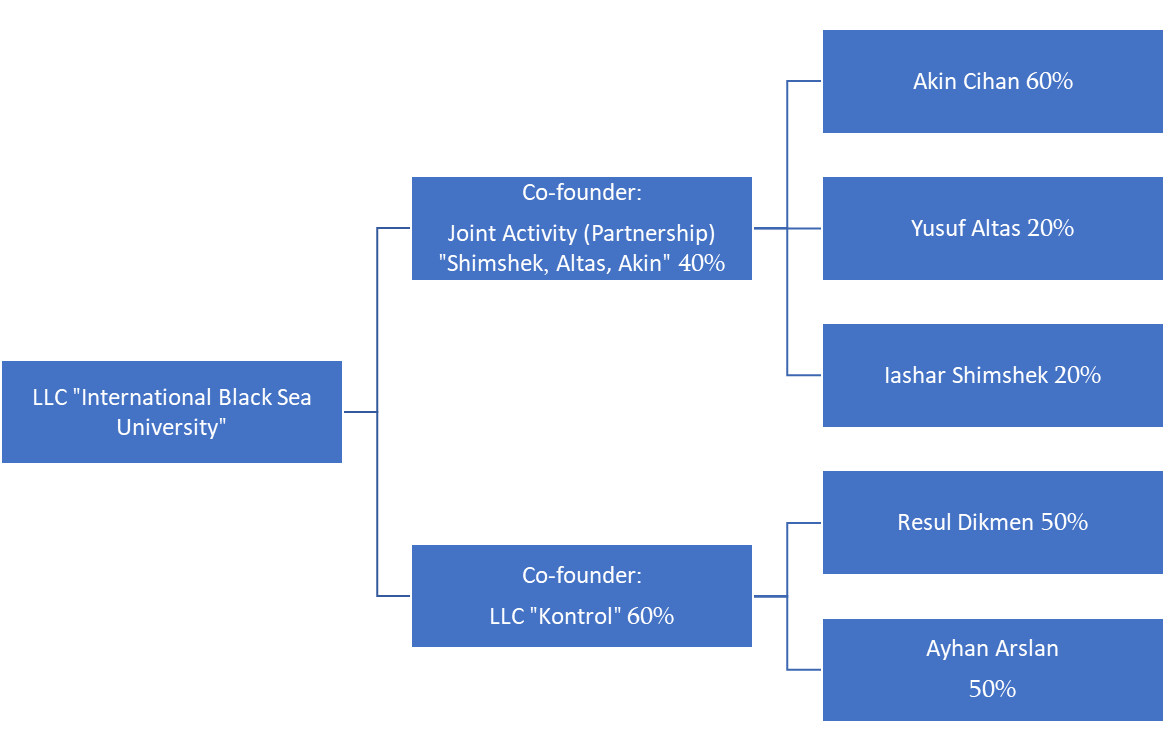 As noted in the application for securing the claim, the International Black Sea University LLC had been made liable for paying GEL 1,648,201.24 to the State on the basis of a tax demand notice of August 5, 2014. As of today, these arrears amount to about GEL 800,000 and a separate legal dispute is being litigated in connection with them.  In addition, the value of the assets owned by the International Black Sea University LLC considerably exceeds the amount of the disputed tax arrears. For example, one of the buildings of the university has been valued at GEL 12,900,000, while the amount of the arrears is about 6% of the value of this seized building only. Accordingly, at the moment of the imposition of seizure, the risk of non-fulfillment of liabilities to the budget was practically non-existent, because tax lien/mortgage of the entire property of the IBSU has been registered since August 2014, and the court was also informed of this fact.

The absurdity of the legal dispute on recognition as alter ego and, especially, of application of seizure of the property of the International Black Sea University LLC and of the stakes of its founders and founders’ partners as a measure for securing the claim in the framework of this dispute raises well-founded doubts that the judiciary is also actively involved in the State’s targeted actions against the university.

The Public Registry has, without any lawful basis, protracted the registration proceedings of partners of a company that is a founder of the IBSU for two days and failed to register the alienation of their stakes in the educational institution.

February 6, 2017 (16:38) – Partners of Kontrol LLC, a partner company of the IBSU, Resul Dikmen, and Ayhan Arslan, applied to the Business Registry with a request to register the sale of their stakes in Kontrol LLC to Zaper Suslu on the same day. The Business Registry protracted the said registration without any lawful basis, which later made it impossible to alienate the stakes.

February 7, 2017 (19:24) – The Revenue Service submitted an application to the Registry regarding its request to the court to impose a seizure.[2]

February 7, 2017 (20:01) – The Registry suspended the registration proceedings on the alienation of stakes of partners of Kontrol LLC, a partner company of the IBSU.

February 8, 2017 (18:44) – The Revenue Service submitted to the Registry a ruling of the Tbilisi City Court regarding the imposition of seizure on the immovable property of the IBSU, the stakes of its founders, and those of the partners of the founders.[3]

February 8, 2017 (19:07) – On the basis of this ruling, the Registry also granted the application of the Revenue Service regarding the imposition of seizure.

Together with the application, the IBSU also submitted a receipt for the fee of accelerated registration; accordingly, the Registry was supposed to finish the proceedings on the same day (February 6, 2017). However, it only made the decision at 8 PM of the following day (February 7, 2017), which raises doubts that it waited for the application of the Revenue Service demanding the imposition of seizure. In addition, all the applications of the Revenue Service which made it impossible to register the alienation of stakes were received by the Registry during non-working hours.

The decision made by the Authorization Council creates a risk of serious financial difficulties for the university.

Any restriction applied by the State must be proportional to its goals. In addition, it is important to ensure that the autonomy of the university and the proper realization of students’ right to education are not endangered.

In the framework of the authorization process of the IBSU, the experts’ group gave a positive evaluation to the university’s compliance with the authorization standards. In spite of this, the Authorization Council restricted the university’s right to admit students for a year, citing the tax arrears to the State and the seizure of the entire property as the basis of its decision. The Council failed to take account of the fact that the dispute on this matter is still pending in the court. In addition, the university, on its initiative, paid the entire disputed sum to the state budget in advance, in order to avoid all risks.

Students without a university

The decision of the Authorization Council which deprived the IBSU of the right to admit students in the academic year of 2018 was published at a later date. Students who had failed to be admitted to other universities they had indicated as choice number one were automatically admitted to the IBSU, which they had indicated as choice number two, without the university being entitled to admit students.

The Council took the decision on August 20, two days before the deadline until which university entrants could select the university. During the period between the adoption (20.08.2018) and publication (01.09.2018) of the decision, the IBSU was still included in the list of universities prospective students could choose from. In addition, the official website of the National Examination Center didn’t contain information about any restrictions. Individual text messages about the said restriction were only sent to those students who had circled the IBSU as their first choice, while those who had selected it as their second or further choices, or wanted to make use of the mobility right, were not provided with this information.

Therefore, due to the late publication of the Authorization Council’s decision, it became meaningless for the IBSU both to appeal against this decision in court and to demand its suspension. Even if the IBSU wins the dispute, students will no longer be able to be admitted to the university during the current academic year.

The harm caused by the seizure

The right of the ISBU to admit students has been restricted for a period of one year. According to the explanation of the Authorization Council of General Education Institutions, the seizure of the entire property and buildings of the university put the guarantee of the university’s sustainability under question. Thus, the seizure of the property is one of the main arguments in favor of the imposed restriction.

The right of the IBSU to dispose of its property has been restricted without a lawful basis. Due to the groundless demand of the Revenue Service to impose a seizure, the unsubstantiated ruling of the court, and violation of statutory procedural rules by the Business Registry, there arises a doubt that the State was interested in preventing the partners of the company which is a founder of the IBSU from alienating their stakes in the company, on the one hand, and in interrupting the normal functioning of the university, on the other.

The IBSU has fully paid the tax arrears to the budget, but the restrictions are still in force.[4] The formal grounds for the restrictions – the risk of non-payment of tax arrears, which were used by the Revenue Service and the court when they substantiated the seizure, are practically non-existent today. Accordingly, both the seizure of the university’s property and the restriction imposed by the Authorization Council on the basis of the same arguments are groundless.

We believe that the restriction imposed on the property and stakes of the IBSU are groundless and must be eliminated, while the university must be given the opportunity to freely alienate/dispose of its property.

[2] However, by that time, the Tbilisi City Court had not adopted the ruling on granting the application and imposing the seizure.

[3] Here the reference is made to the immovable property and stakes of the IBSU and Kontrol LLC, which owns 60% of the stake in the university.

[4]  The lawfulness of these arrears is still being examined by the Tbilisi City Court, though the university has paid the said sum to the budget in advance, to avoid the imposed restrictions.