Final Assessment of the 28 November Second Round of Presidential Elections

According to our observations, the second round of the 2018 Presidential elections was held in a largely peaceful environment, without serious violent incidents. Nevertheless, the Election Day showed new problematic trends related to alleged vote buying, violation of the secrecy of vote and registration of voters through unacceptable means.

Our observers reported up to 150 insignificant and relatively serious violations. In total, we filed 12 complaints. The following trends are to be noted: 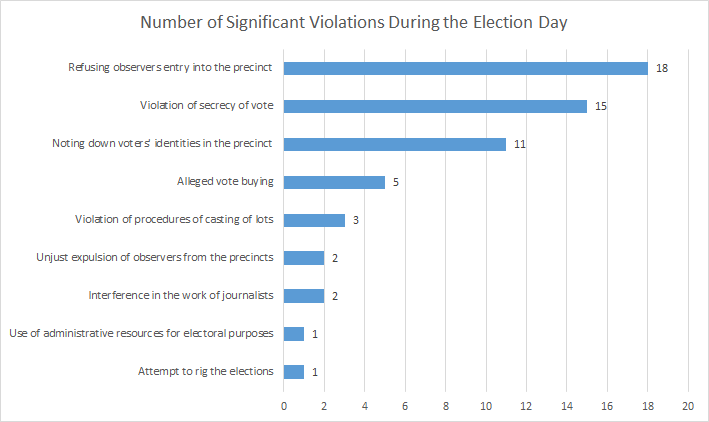 During the whole day, there was a visible mobilization of presidential candidate coordinators outside of nearly all precincts, which created a tense atmosphere. Moreover, our observers noticed that most of them were standing outside with cars and people could be spotted getting in and out of the cars on a periodic basis. In four cases, according to our observers, the voters received money in the cars. In one more case, there was an alleged instance of vote-buying within the precinct.

Violation of secrecy of the vote

There was an observable trend of violation of the secrecy of vote at the precincts. Our observers witnessed, at 14 different precincts, instances of voters leaving the voting booth and showing their open ballot to a commission member, representative of an electoral subject or an observer.

Noting down the voters in the precinct

There was an observable trend of the queue moderator revealing the identity of voters to the observers. The moderators were either loudly saying the name and surname of the voter or dictating it to observers from different organizations. These actions could be perceived by the voters as an attempt to put pressure on them and to control their right to vote freely.

Interfering in the work of journalists

There were two instances of interference in the work of journalists when journalists from TV Pirveli and news.on.ge were not allowed to record video material and an attempt was made to physically assault them. The MIA has started an investigation into both cases.

In the #52 precinct of the Marneuli #22 district, our observer witnessed how a voter was trying to cast several ballot envelopes into the ballot box. After protests from our observer, the voter ran away from the precinct, however, our observer was able to take a picture of him. The MIA has already started an investigation into the case and has identified the culprit.

Refusing observers entry to the precinct

Since the morning, there have been instances of refusing our observers to enter the precincts. Some chairpersons stated that the refusals were based on the expiry date of November 20 printed on the badges. Apparently, these chairpersons were not notified of the CEC’s order that postponed the expiration date of the badges. Following the intervention of the DECs, our observers were allowed entry.

Violation of the rules for casting of lots

Use of administrative resources for electoral purposes

In the #67 precinct of the Zugdidi district, a car owned by the Zugdidi Municipality (# ZMG 400) was used during the whole day by Mamuka Tsimintia, Deputy Director of Zugdidi’s Management Center for Improvements. The use of automobiles owned by the state for electoral purposes is prohibited by the Election Code of Georgia and represents the use of administrative resources.

Issues in the process of summarizing voting results

In a number of precincts, the commission members weren’t able to compile the summary protocols of election results and at times they wrote inconsistent explanations.

About Our Observation Mission

Transparency International Georgia (TI Georgia) deployed 350 observers to monitor the November 28 second round of Presidential Elections. Our static observers covered 300 precincts throughout the country. In addition, 45 mobile groups were also involved in the monitoring of this election.