This time, we are presenting data on the funds allocated to religious organizations in Samegrelo-Zemo Svaneti region as well as on the property transferred by the National Agency for State Property Management to the given institutions. The study covers the period from 01 January 2014 through July 2016.

As the obtained information reveals:

The property transferred to religious organizations in Samegrelo-Zemo Svaneti region:

In addition, over the period between 2014 and 2016 the Patriarchate of Georgia has submitted five applications to the State Property Management Agency for other sites; however, requested plots of land still remain into the ownership of the State:

Funds allocated by Samegrelo-Zemo Svaneti municipalities to the Orthodox Church: 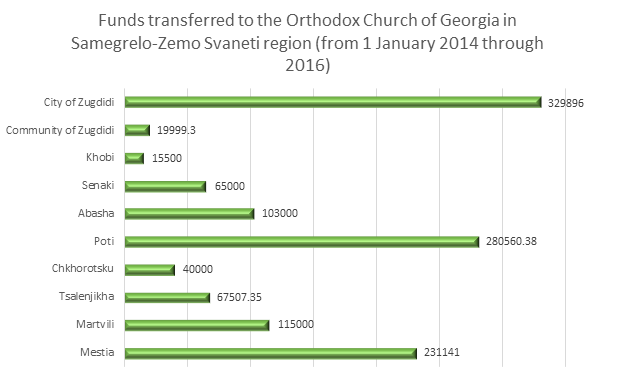 From 2014 through July 2016, Municipality of Zugdidi City has overall expended GEL 329 896 on celebration of religious holidays and building-reconstruction of churches and monasteries. Namely:

From 2014 through July 2016, Khobi municipality has overall allocated GEL 15 500 to rehabilitate Holy Trinity Church in Khobi and reimburse electricity costs of Nojikhevi monastery.

In September 2014, Senaki municipality allocated GEL 65 000 from the local budget to rehabilitate St. Aleksi Shushania school-gymnasium, operated by the Patriarchate of Georgia.

Funding allocated by Abasha municipality has made up GEL 132 000. Specifically:

During the study period, GEL 280 563.35 were allocated from Poti municipal budget to rehabilitate Poti Cathedral, in particular:

In 2014, Chkhorotsku municipality allocated GEL 40 000 to Senaki-Chkhorotsku Diocese to construct a temple after the King David Agmashenebeli.

From 2014 through July 2016, Tsalenjikha municipality has allocated GEL 67 507.35 to several churches and monasteries, in particular: