IDPs living on Javakhishvili Street in Poti have been demanding the resolution of the problem of noise and air pollution for years. According to the IDPs, the noise is caused by trucks that move 24 hours a day, while the pollution is the result of dust scattered in the air during the transportation of cargo. The existence of grave environmental problems in the IDP settlement is confirmed by representatives of both the local and central authorities. TI Georgia has found out that the noise and dust are caused by the operation of various enterprises, including companies connected with the Mayor of Poti, Gocha Kurdghelia, and member of Poti CIty Council, from "Georgian Dream" Apalon Bzhalava.

The IDP settlement is located next to the Poti Industrial Zone and borders directly on Transford LLC. Located nearby is also JSC Poti Sea Port Corporation, which has transferred its own territory to the companies on the basis of a lease agreement, and Transford LLC, Channel Energy (Poti) Limited Georgia LLC, and other firms transport various types of cargo (including concentrates) from here. Adjacent to the port is the Customs Clearance Zone, which also has intensive truck traffic.

According to the Ministry of Internally Displaced Persons from the Occupied Territories, Labor, Health, and Social Affairs of Georgia, the IDPs have been living on Javakhishvili Street in Poti since they became refugees. In 2012, the process of legalization of their apartments got underway, and it still continues. Up to now, the residential spaces have been transferred into the ownership of 83 families.

Links between Transford LLC and the Mayor of Poti

It is precisely Metalex + LLC and Metalex Trans LLC in which the current Mayor of Poti, Gocha Kurdghelia, owns 3.5% stakes.

It should be noted that a part of the non-agricultural land plots and buildings/structures in the so-called industrial zone adjacent to the settlement is owned by Pace Terminal LLC and Poti Shipyard LLC.

The Mayor of Poti, Gocha Kurdghelia, also owns a 15% stake in Caucasian Metals Terminal LLC. The company has been in operation since 2013. The enterprise is situated on Chavchavadze Street in the City of Poti, and its main activity is the processing of polymetal concentrates. According to the residents of Javakhishvili Street, this processed cargo is transported through their settlement, while the dust scattered during the transportation pollutes the air. The residents of Chavchavadze Street have held several rallies to protest against the noise and pollution.

The directors and shareholders of individual companies connected with Transford LLC and Pace Georgia LLC, as well as the Mayor of Poti, Gocha Kurdghelia, are also donors of political parties. 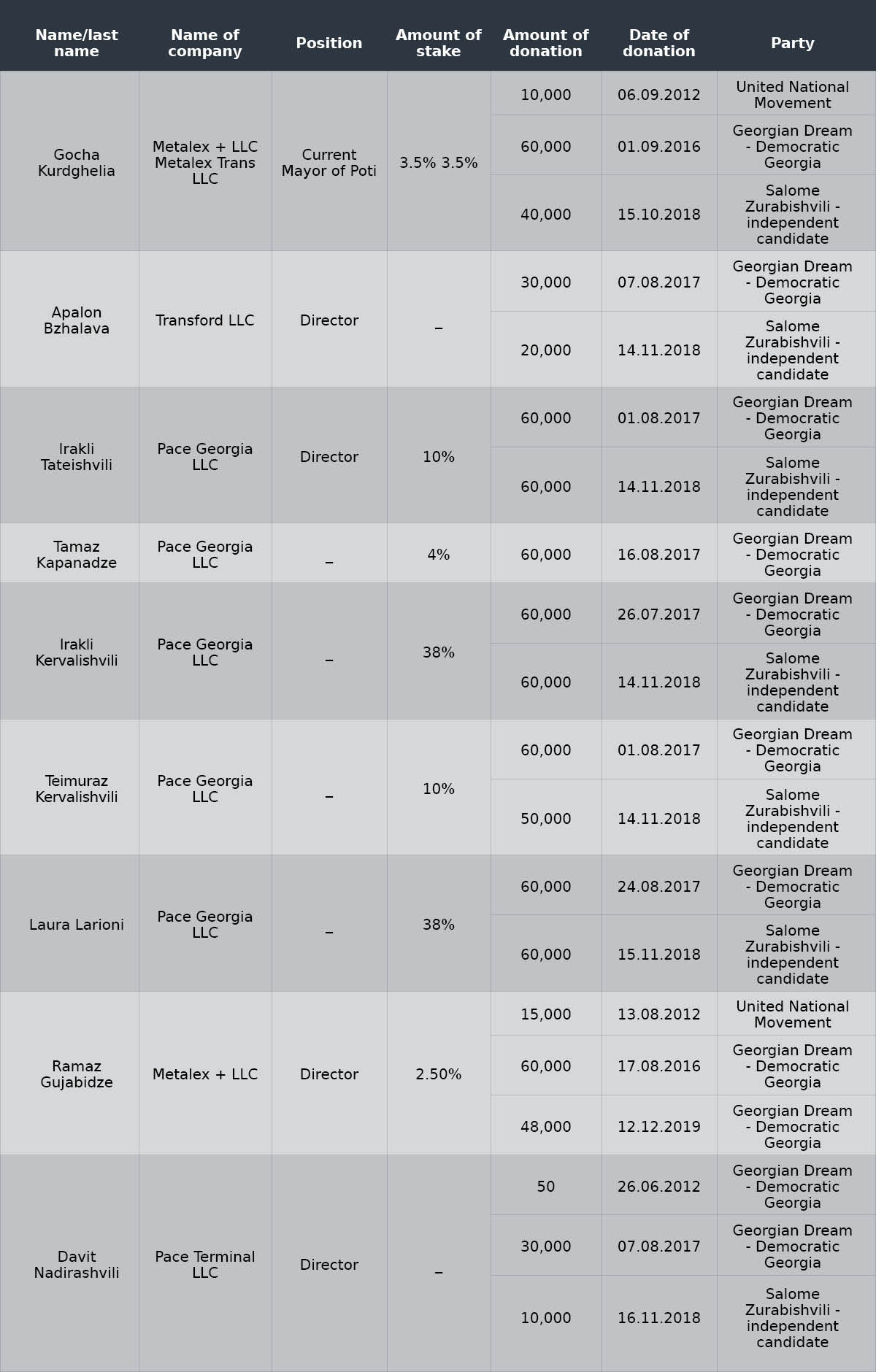 The individuals indicated in the table have donated GEL 853,050 in total, specifically:

It is noteworthy that the individuals listed in the table donated the largest amount of money (GEL 360,000) in 2017, during the one-month period from July 26 to August 24, and the recipient of the amount is the Georgian Dream – Democratic Georgia. In the local self-government elections of 2017, Gocha Kurdghelia, the mayoral candidate from the Georgian Dream, became the Mayor of Poti.

The position of the Poti Municipality

The IDPs living in Poti have applied to the City Hall on several occasions with the aim of resolving the problem, and the City Hall sent motions to the relevant ministries. In a letter we received from the Poti City Hall, the agency confirmed the existence of the problems enumerated by the IDPs. In their opinion, the noise is caused by the fact that the only road connecting with the port passes through the central part of the city, among densely populated quarters, while the increase in the cargo turnover has, in its turn, also increased the intensity of truck traffic. According to the City Hall, in certain districts, the noise level is far higher than the maximum permissible level – 60 decibels (in some cases, it reaches 94-97 and 101-103 decibels).

The Poti City Hall also notified us that they had applied to the relevant ministries on several occasions with motions to resolve the problem, including with the aim of determining the content of dust and lead in atmospheric air, water, and soil.

The Department of Environmental Supervision has written to us that they studied the production process of both the enterprises located adjacent to the IDP settlement on Javakhishvili Street[1] and Caucasian Metals Terminal LLC on several occasions and identified individual violations, including violations at the time of transportation of waste; discharge of contaminated water into surface water bodies; failure to record stationary sources of air pollution and spraying of harmful substances; etc. You can see the detailed information in the annexes.

And according to the information provided by the National Environmental Agency, they measured the content of dust particles, carbon monoxide, nitrogen dioxide, and metals in the air on the balcony of one of the apartment buildings on Javakhishvili Street in Poti. The study established that the concentration of dust exceeded the corresponding norm in all samples, while in individual samples the content of manganese dioxide also exceeded the permissible norm.

In the opinion of TI Georgia, the living environment of the residents of Javakhishvili Street in Poti is not safe, which is confirmed by the information provided both by the Poti City Hall and the National Environmental Agency.

On the other hand, there is a kind of conflict of interest between the Mayor of Poti and the existing problems: The Mayor of Poti, Gocha Kurdghelia has ties with the very companies whose activity is causing noise and air pollution, and this circumstance may be a hindering factor for the resolution of the problem.

[1] JSC Poti Sea Port Corporation, including  the industrial process that is underway in the territory transferred by the joint stock company to Transford LLC on the basis of a lease agreement; Channel Energy (Poti) Limited Georgia LLC.