The park located in the center of Ninotsminda, which used to be a public space, was gradually registered in private ownership. It is noteworthy that the owners of 2,840 sq/m of land became current and former local government officials, their family members, the persons closely related to them and the representatives of the companies, which were receiving simplified procurements solely from Ninotsminda city hall and its legal entities for many years. 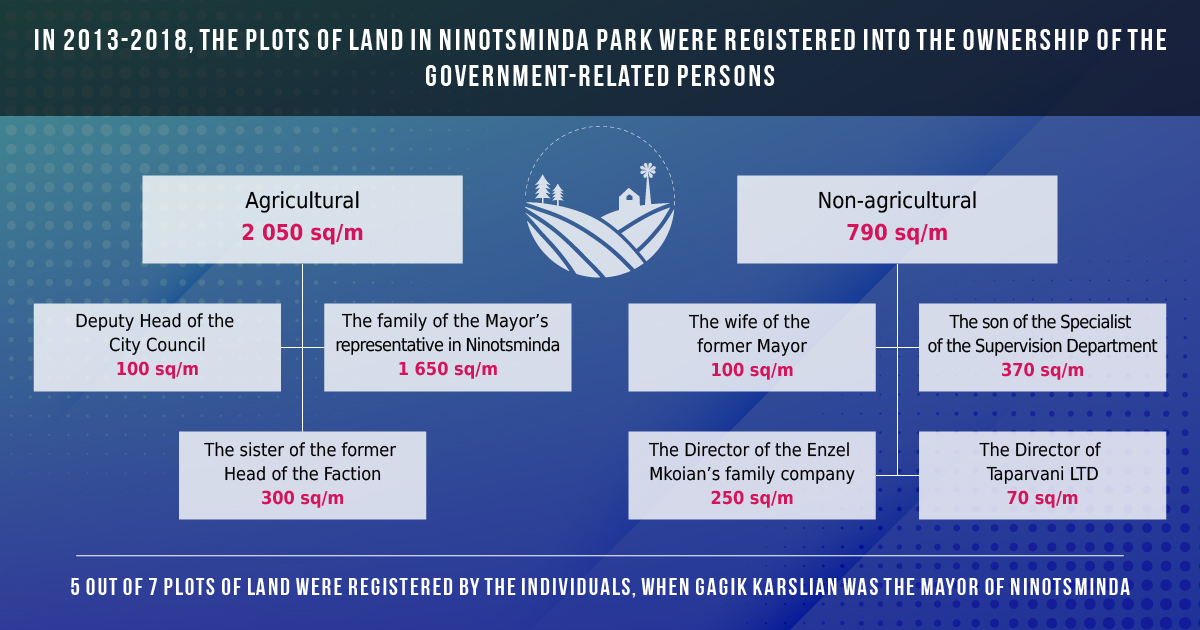 The Deputy Chairman of Ninotsminda city council, Konstantin Vardanian, was appointed to the position in 2013. Since November 2015, he has registered 100 sq/m of agricultural land in Ninotsminda park. “Tele-Radio Company Parvana” owned by Vardanian and his family has been winning Ninotsminda’s tenders since 2013 without competition. Transparency International Georgia wrote about this company’s alleged corrupt procurements in July 2020.

Since February 2018, 1 660 sq/m of land has been owned by the brother, the mother and the father of the Mayor’s Representative in Ninotsminda, Khoren Mghdesian. Khoren Mghdesian has been working on that particular position since January 2015.

Another agricultural land in Ninotsminda park with a total area of 300 sq/m has been registered in the ownership of Takuhi Vartanian since January 2014. His brother, Mushegh Vardanian was the head of the “Social-Economic Development and Infrastructure” faction of the City Council in 2010-2014.

Another 250 sq/m of a non-agricultural land in Ninotsminda Park is owned by the Director of the Georgian Dream’s former majoritarian MP, Enzel Mkoian’s Family company - Meeki LTD, as well as the former partner (9% shareholder) of Enzel Mkoian’s son - Karapet Mkoian’s company, Dekmak LTD, Petros Nanaian. He registered the mentioned plot of land in December 2015. He has been appearing in Mkoians’ companies since May 2017. Transparency International Georgia wrote on Mkoian family companies’ alleged corruption procurements with Ninotsminda city hall in January 2020.

The Director and 50% shareholder of Taparvani LTD, Rafik Shahinian, has owned a 70 sq/m land in Ninotsminda park since December 2015. Since 2012, his company has won all of the state procurements on the construction works, except two, from Ninotsminda city hall and its N(N)LEs. During this period, he received GEL 154 300 from Ninotsminda municipality with 20 procurements.

A part of the seven plots of land are registered using the archive notices, while the others were registered based on the conclusion of the Recognition Commission.

Ninotsminda City Council and the Ministry of Economy state that the mentioned areas have never been on their balance and therefore they have never sold them. The National Agency of Public Registry replied to us in March, this year, that they were processing our requested information and they would provide it upon completion. However, the Investigation Service of the Ministry of Finance initiated criminal prosecution against the former Mayor of Ninotsminda, Gagik Karslian, his wife’s sister - Lusik Giulasarian, who created the drafts, and the owner of 4 plots of land in Ninotsminda park with the total area of 308 sq/m - Shaheen Grigorian. According to the investigation, Gagik Karslian gave forged notices to Shaheen Grigorian for registering the plots of land in ownership in two cases and received the bribe in exchange.One of two plots of land is located in Ninotsminda park.

Based on the second letter received from the National Agency of Public Registry on June 22, the relevant notices issued by Ninotsminda City Hall were attached to the registration documents of these plots of land at the Public Registry. It is noteworthy, that 5 out of 7 lands mentioned above were registered during the period, when Gagik Karslian was the Mayor of Ninotsminda.

In Ninotsminda Park, which has a total area of ​​approximately 20 000 square meters, Ninotsminda City Hall has an area of ​​16 907 sq/m registered, and the rest is divided between private owners.

Transparency International Georgia calls upon the Prosecutor’s Office of Georgia and the Anti-Corruption Agency of the State Security Service to study the case of privatization of the lands in Ninotsminda park and in case of violations, act in accordance with the law.