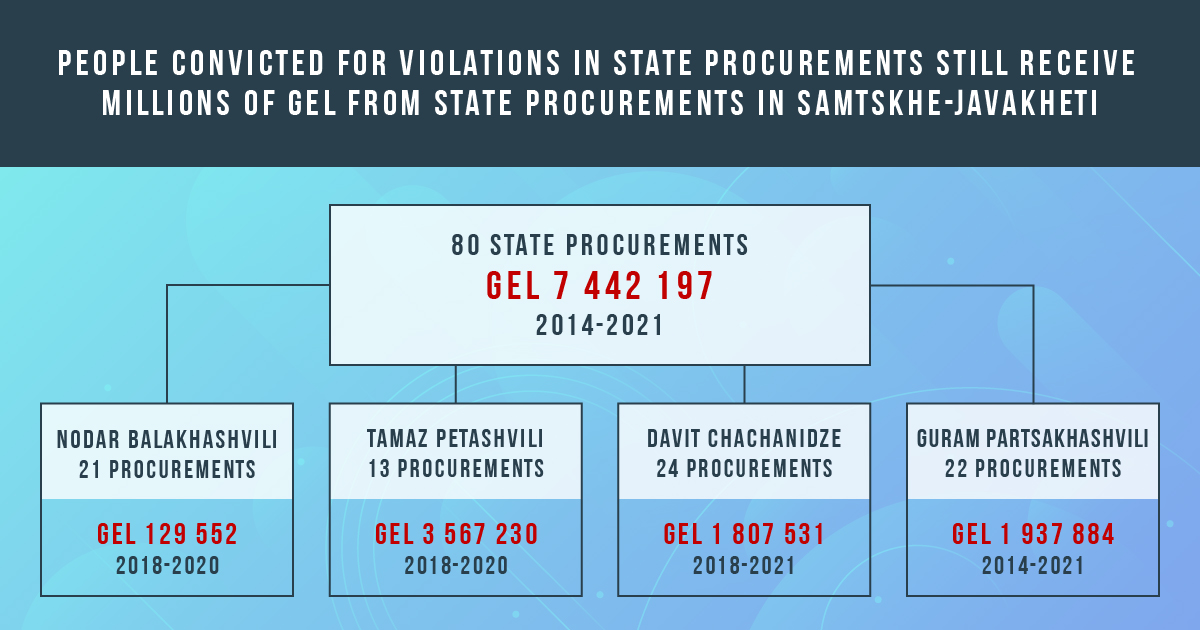 During 2014-2018, Nodar Balakhashvili first held the position of the Head of the Infrastructure Service of Akhalkalaki Municipality and then was an advisor to the mayor, Zaza Melikidze on the same issues. Prior to his appointment to a position in the self-government, Nodar Balakhashvili was the owner of 100% of shares and the Director of Mshenservisi 2012 LTD, a project designing company. He transferred his company to his son-in-law (daughter’s husband), Davit Zedginidze, right after his appointment to the position.

When working in Akhaltsikhe municipality, Nodar Balakhashvili was a member of the tender commission as well as the delivery-acceptance commission. His son-in-law’s company won two tenders of Akhaltsikhe municipality without competition and cost reduction in April 2015 amounting GEL 2500 in total. Nodar Balakhashvili pointed out in both cases that he was not in a state of conflict of interest with Mshenservisi-2012. He, at the same time, accepted the works carried out by his son-in-law.

Nodar Balakhashvili was forced to leave his position in February 2018 after he was convicted for his project-accounting documents for the rehabilitation of eight streets[1] of Akhaltsikhe. The case addressed the simplified procurement given to Renaissance 77 LTD in 2013 with the cost of GEL 58 000. Balakhashvili held the position of engineer in Renaissance 77 LTD. He pleaded guilty to Article 220 Prima of the Criminal Code of Georgia and agreed to the plea bargain.

Soon after leaving the position in Akhaltsikhe municipality, Nodar Balakhashvili regained Mshenservisi-2012 LTD given to his son-in-law and registered as an individual entrepreneur too.

Prior to his employment in the self-government, he participated in construction and project-design tenders and got into tenders announced for the procurement of social packages after leaving the city hall. While he had not won any tender in Akhaltsikhe municipality before holding the position, he won all of his tenders solely from the Akhaltsikhe city hall after being appointed in the municipality. He received GEL 70 845 in total from 12 tenders. He won 10 out of 12 tenders without competition and one tender on the expense of disqualification of his competitor. Balakhashvili received GEL 52 897 in total from the non-competitive tenders.

Regarding the simplified procurements, 9 contracts were signed with him on design and planning works, GEL 58 707 in total, out of which 4 tenders worth GEL 31 910 with Akhaltsikhe city hall.

Another person sentenced with Nodar Balakhashvili in early 2018 for the so-called “case of the eight streets” is the Director and 12% shareholder of Meskhetavtogza LTD, Tamaz Petashvili. Meskhetavtogza was paving roads as a subcontractor of Arali LTD on the streets of Akhaltsikhe in 2017. According to the case documents, Meskhetavtogza LTD paved the roads of less volume and thickness, while submitting the increased numbers during the reporting. Akhaltsikhe District Court convicted Tamaz Petashvili under the Article 210 of the Criminal Code of Georgia, which defines the manufacturing of forged documents.

Meskhetavtogza LTD won 6 tenders and received GEL 3 055 565 in 2018-2020 after Petashvili’s conviction until the ruling of the Supreme Court of Georgia. Tamaz Petashvili owns 33% of shares in another construction company - Otskhe LTD, which won 7 tenders worth GEL 511 665 during the same period. In three years, Tamaz Petashvili’s two companies received 13 state procurements worth GEL 3 567 230 in total.

It should be noted that one of the founders and owner of 12% of shares of Meskhetavtogza LTD, Giorgi Aghlemashvili, was appointed to the position of the head of infrastructure department of the Akhaltsikhe municipality city hall in July 2020. Aghlemashvili gave his shares of the company to his son.

Owner and Director of Renaissance 77 LTD and New Project LTD, Davit Chachanidze, was convicted for unlawful misappropriation and embezzlement of GEL 10 000 in February 2018, from Akhaltsikhe local budget. He pleaded guilty for the crime defined by the Article 182 of the Criminal Code of Georgia and agreed to a plea bargain. The case addressed the tender worth GEL 86 500 won by New Project LTD from Akhaltsikhe municipality in September 2015. According to the tender conditions, the rehabilitation works of the drinking water had to be carried out in Chvinta, Tatani and Klde.

Davit Chachanidze, who was convicted of embezzlement of budget funds, received a total of GEL 1 807 531 from 24 state procurements in three years.

The owner of 71,6% shares and Director of Samtskhe - XXI LTD - Guram Partsakhashvili was convicted and sentenced for unlawful misappropriation and embezzlement of GEL 33 400 under the Subparagraph 2 of Paragraph C of Article 182 of the Criminal Code of Georgia in 2014. He was sentenced to imprisonment for eight years by the district court, but was offered a plea bargain on the second stage during the court of appeals, to which he signed. The case addressed the tender announced by Akhaltsikhe municipality, according to which, Samtskhe XXI had to carry out construction works of the roof of a living block for GEL 54 800 located on 28, Aspindza street, Akhaltsikhe.

Receiving millions of GEL from public procurement by people convicted of corruption contradicts both the best international practice in the field of procurement and the recommendations of Georgia's partner international organizations.

The Anti-Corruption Network of Eastern Europe and Central Asia and the Council of Europe advise Georgia to limit the participation of persons involved in corruption in government procurements and to extend these restrictions to both the company and the owners of the company.

[1] Nodar Balakhashvili was charged for the case of Otar Tateshvili, the owner of Arali Ltd. Tateshvili admitted that he misappropriated GEL 130,000 while paving 8 streets in Akhaltsikhe.