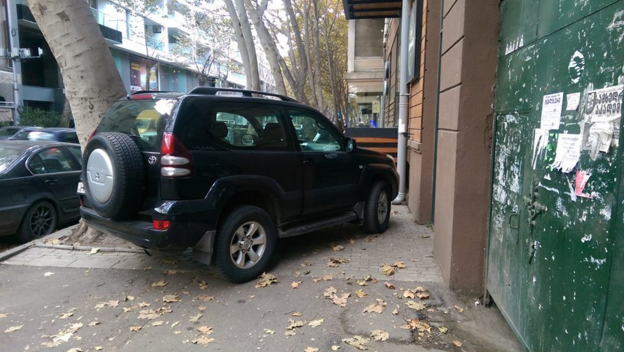 On November 20 this year, a member of the Parliament of Georgia, Ioseb Jachvliani, submitted a legislative initiative on changes to the Code of Administrative Offences of Georgia to be considered by the legislative body. On November 30, the Bureau of the Parliament tasked the Legal Issues Committee and the Human Rights and Civil Integration Committee with discussing Mr. Jachvliani’s initiative.

The main change in the proposed version is the replacement of the word “traffic” with the collocation “vehicle traffic”, which implies that the sanction of transportation to an impound lot will no longer extend to, for example, vehicles parked on the sidewalk that block the pedestrian traffic. The explanatory note to the draft law directly states that the goal and main essence of the draft law is to exclude the cases of blocking the pedestrian traffic from the scope of the aforementioned provision.

The proposed draft law contains a threat and, if approved, will significantly deteriorate the situation in Georgia’s cities, especially in Tbilisi.

The Law of Georgia on Road Traffic directly obligates citizens to walk on the area of the road that is specially allocated for them – the sidewalk – and prohibits parking vehicles on that area. If the proposed draft law is adopted in the current form, vehicles parked on the sidewalk that only block the pedestrian traffic will no longer be subjected to liability in the form of a sanction – transportation to a protected parking lot. The relevant bodies may only limit themselves to writing out a fine receipt, which, we believe, is an insufficient means and will not be enough to regulate this issue.

In Georgia’s capital, people often park cars on the sidewalk, which hinders the pedestrian traffic and, in some cases, makes the sidewalk completely impassable for pedestrians. This problem reflects especially badly on persons with disabilities and people who walk in the street together with small children, because it is especially difficult for them to bypass cars parked on the sidewalk.

The change proposed by MP Jachvliani (according to which the sanction of transportation to an impound lot will no longer extend to vehicles parked on the sidewalk which block the pedestrian traffic) implies the abolition of the only existing more or less effective mechanism for fighting the problem of parking on sidewalks and, thus, will considerably deteriorate the situation for pedestrians as well for parents of small children and persons with disabilities in Georgia’s cities.

The best practice of modern urban development (which is being increasingly introduced both in Europe and other countries of the developed world) first of all implies adapting the urban environment for the interests of pedestrians (as a rule, at the expense of imposing additional restrictions on vehicles). Therefore, the proposed draft law directly contradicts the modern principles of city planning in addition to deteriorating the situation for a large part of Georgian citizens.

Judging by all the aforementioned, we call upon members of the Parliament of Georgia not to support the initiative of MP Jachvliani.