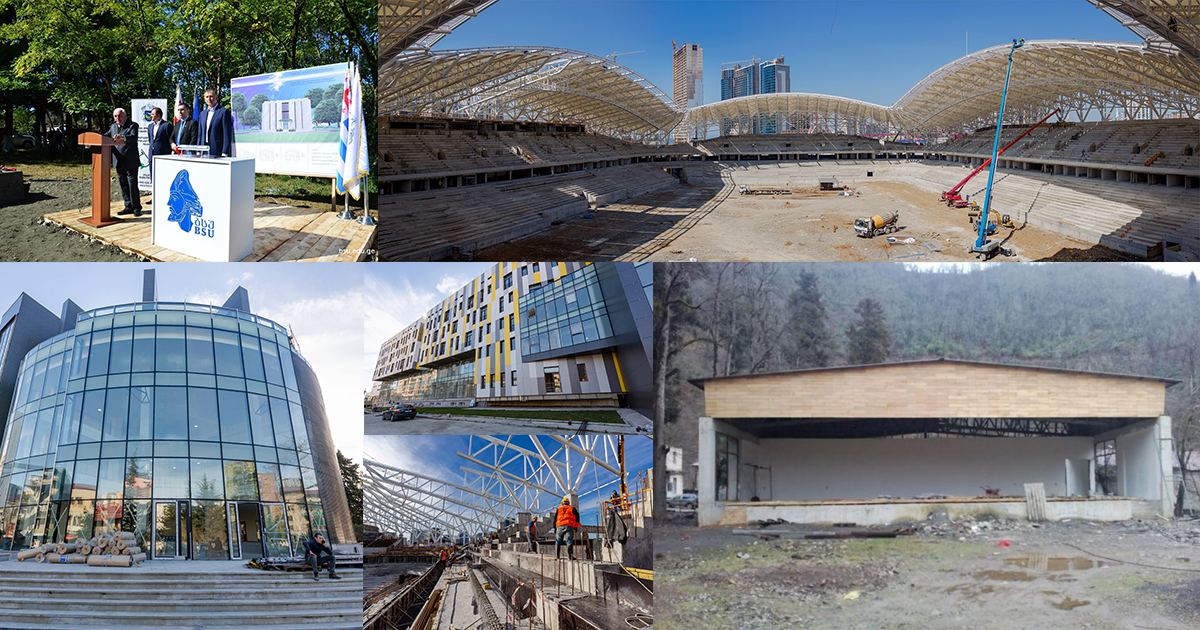 On the basis of open sources and public information, TI Georgia has conducted monitoring of the implementation of infrastructure projects in Adjara that were announced by the authorities at various times. The construction of two of the five structures studied started as early as in 2012-2013, though, despite promises made, none of them has been put into operation.

The construction of the Multi-Functional Republican Hospital of Batumi started on March 16, 2016. Stadium Ltd, a company established by the Ministry of Finance and Economy of Adjara, was supposed to complete the construction on May 18, 2018 (in addition to the Republican Hospital of Batumi, Stadium Ltd was also assigned the task of constructing the Batumi stadium).  However, the deadline of completion of the construction was extended first to August 31, 2018, and then to December 31, 2019. According to Zurab Churkveidze, director of Stadium Ltd, one of the main causes of the delay was the inaccuracies in the project, due to which the company hired an expert to prepare a report.

The construction of the hospital costs the Government of Adjara more than GEL 25 million. According to Zaal Mikeladze, the Minister of Health of Adjara, the procedures of acceptance and delivery of the project will start in the nearest days, but the exact amount of money it will take to technically equip the hospital still remains unclear. At this point, the estimate stands at about GEL 35 million – the 2019 budget of the Autonomous Republic of Adjara does not provide for funds allocated for this purpose, and the Georgian Government’s Program of Rehabilitation and Equipment of Medical Institutions for 2019 also does not provide for funds for the equipment of the new building of the Republican Hospital of Batumi. The Government approved this program on January 28, 2019, and made amendments to it on May 14. GEL 20 million was designated for this state program which provides for the equipment and rehabilitation of various clinics.

In 2017, the Minister of Health of Adjara, Zaal Mikeladze, stated that the right to manage the hospital might be transferred to an international company. Later, the Minister of Health of Georgia, Davit Sergeenko, said a new model of direct state management of the hospital was being considered – according to the Minister, the Republican Hospitals of Batumi and Tbilisi, the Medical Center of Sachkhere, and the Rukhi Clinic near Zugdidi are supposed to come under a unified state concept, which aims to launch model state clinics.

From January 2018, the Anagi company, which had won the tender, started the construction of the stadium, and GEL 117 million was allocated for the works of the first stage of the construction.

Despite such expenditures, according to the official explanation of the Government of Adjara, the stadium will not be able to host such international football matches as the finals of the UEFA League and the European Championship due to incompliance of the infrastructure characteristics with international standards.

The tender was won by the Keturina company. After the municipal council concluded a contract with the company, the construction works started on August 16, 2013. The construction was to be completed within 18 months. However, today representatives of the municipality declare that the project was flawed: the project didn’t provide for the arrangement of ventilation and fire safety systems; in addition, the company started making the roof and the foundation with technical flaws.

In 2014, several months after it started the works, the construction company itself demanded the termination of the contract, because it was unable to finish the construction at the determined price. A representative of the Keturina company, Roin Abuselidze, blames the Kobuleti City Council for the interruption of the construction. Ultimately, the contract between the Kobuleti City Council and Gza XXI LLC (Keturina LLC was given this name after rebranding) was terminated on April 15, 2015.

To continue the interrupted construction, on May 6, 2016, the Kobuleti Municipality sent the modified project to the Forensics Bureau, from which it received a positive conclusion.

The Deputy Mayor of Kobuleti, Davit Verulidze, has told TI Georgia that the project will only continue after it is decided, considering experts’ opinion, whether the construction should continue on the foundation built by the Gza XXI company (the former Keturina LLC) or a new territory should be selected. The municipality officials are unable to say when this issue will be resolved; accordingly, it is unclear when Kobuleti will have a new sports complex.

On April 7, 2017, the Town Hall of Keda concluded a contract with a value of GEL 185,000 with Akhalsheni LLC for the construction of a summer theatre in the village of Makhuntseti, an appealing place for tourists. The theatre was supposed to be completed in the fall of 2017, but, due to modifications of the project and requests by the company implementing the works, changes were made to the contract five times and the deadline for the completion of the construction was extended to March 30, 2018. The project was not completed within this term either.

As the Mayor of Keda, Levan Gorgiladze, has told TI Georgia, the project will only be completed after the Ministry of Finance and Economy has finished work on the development plan of the village of Makhuntseti. According to him, the theatre and the adjoining territory will be developed with the funds of the Autonomous Republic of Adjara. As for Akhalsheni LLC which has won the tender, according to the Deputy Mayor, Roland Beridze, the company was fined due to non-fulfillment of the contractual terms. Officials at the Town Hall of Keda don’t know how much it will cost the local and autonomous budgets to complete the building of the theatre, on which GEL 185,000 has already been spent from the local budget.

On October 18, 2017, on the initiative of Batumi State University and the Government of Adjara, foundations were laid for the construction of the Research Institute of Phytopathology and Biodiversity of Kobuleti. The Vektori company, for which the Government of Adjara and Batumi Shota Rustaveli State University allocated a total of GEL 1,600,000, was supposed to complete the construction in June 2018. However, the presumable deadline for the completion of the works was extended to December 2018. Changes were made to the contract seven times in total. Ultimately, the acceptance-delivery act on the fulfillment of the works between the company and Batumi State University was signed on November 30, 2018, although the new building of the institute has yet to be inaugurated