Kutaisi municipality had to receive GEL 2,259,988 from Parking service LTD as rent, however, it only received GEL 149,999. Kutaisi municipality established this company in 2015 with the  purpose of regulating the parking in Kutaisi and receiving the revenue for the municipal budget, however, none of those goals were achieved.

The average annual expenditure of Parking service LTD is more than GEL 450 thousand and the company accumulates GEL 252 thousand on average from citizens on the expense of fines. Each 1 GEL paid by the citizens on parking fines cost the taxpayers an extra 1,80 GEL. 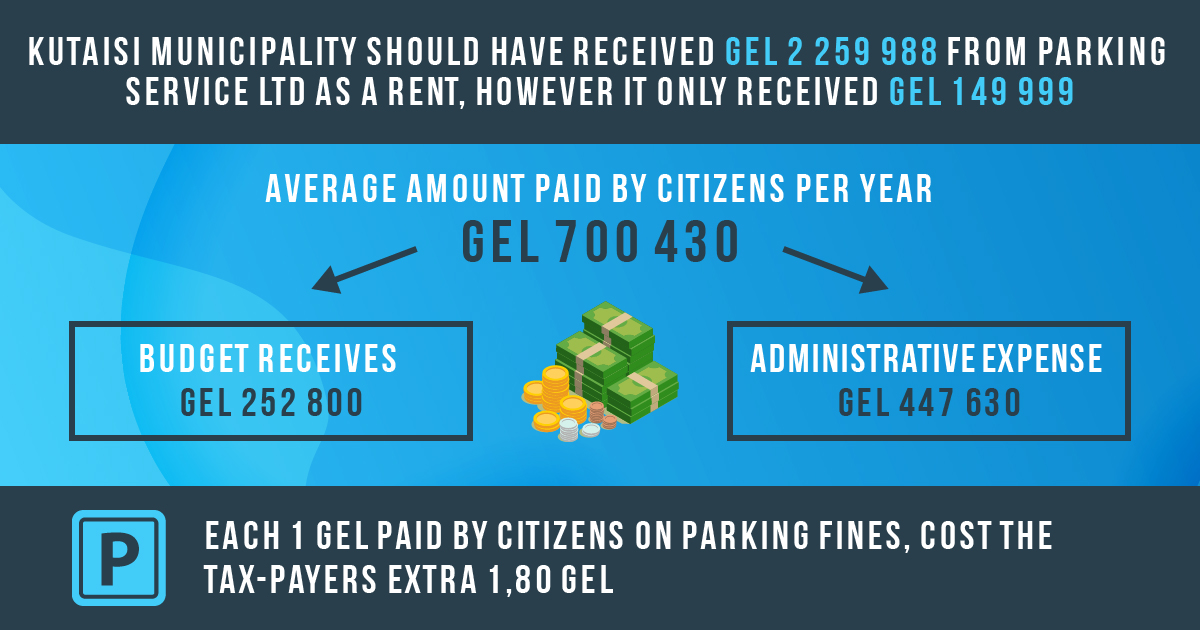 The company neither fulfills its contractual obligations, nor pays the rent for the property assigned to it. For this reason the city hall canceled the rental agreement and transferred the property to the company under the gratuitous usufruct and redistributed the rent and the penalty for the breach, GEL 1,784,890 in total, for 10 years.

Transparency International Georgia wrote about the wrong decision of establishing the LTD in 2017 and 2018. We organized a discussion on this matter that resulted in easing of the contractual terms for the company by self-government.

Establishment of the LTD

Parking service LTD was established by Kutaisi municipality in 2015. According to the rent agreement, the company was granted the land owned by the municipality for which it had to pay GEL 463,415 annually. This amount was reduced to GEL 444,386 in 2018.

In 2014-2015, Prior to the establishment of Parking service LTD, an auction on transferring the right to organize vehicle parking in public and special places in Kutaisi municipality’s territory was announced four times (On November 7, 2014; On April 1, 2015; On April 21, 2015 and on May 5, 2015). The conditions were similar in all four cases and the starting annual cost of transferring this right was GEL 660,000. According to the city hall, all four auctions were cancelled as none of the companies expressed willingness to participate. It has to be noted that the city hall did not make any essential changes in the auction announcement and the auctions were renewed in short time intervals, without analyzing and eliminating the reasons for the failures.

Later, Kutaisi City Hall established Parking service LTD itself. Therefore, the solution of the parking problem in Kutaisi was assigned to the company founded by the municipality, instead of outsourcing it to the private company, that is the international best practice. GEL 300,000 was allocated for the company from the local self-government budget to start the operation.

Parkingservice LTD has been operating since January 25, 2016. Currently, 35 people are employed in the LTD. Parking remains to be an issue on Kutaisi’s central streets even today.

Parking service’s budget is being filled up by citizens who pay the fees for the parking lots determined by the local self-government. The company was obliged to pay the rent for the municipal property, however, it failed to do so since the day of establishment. 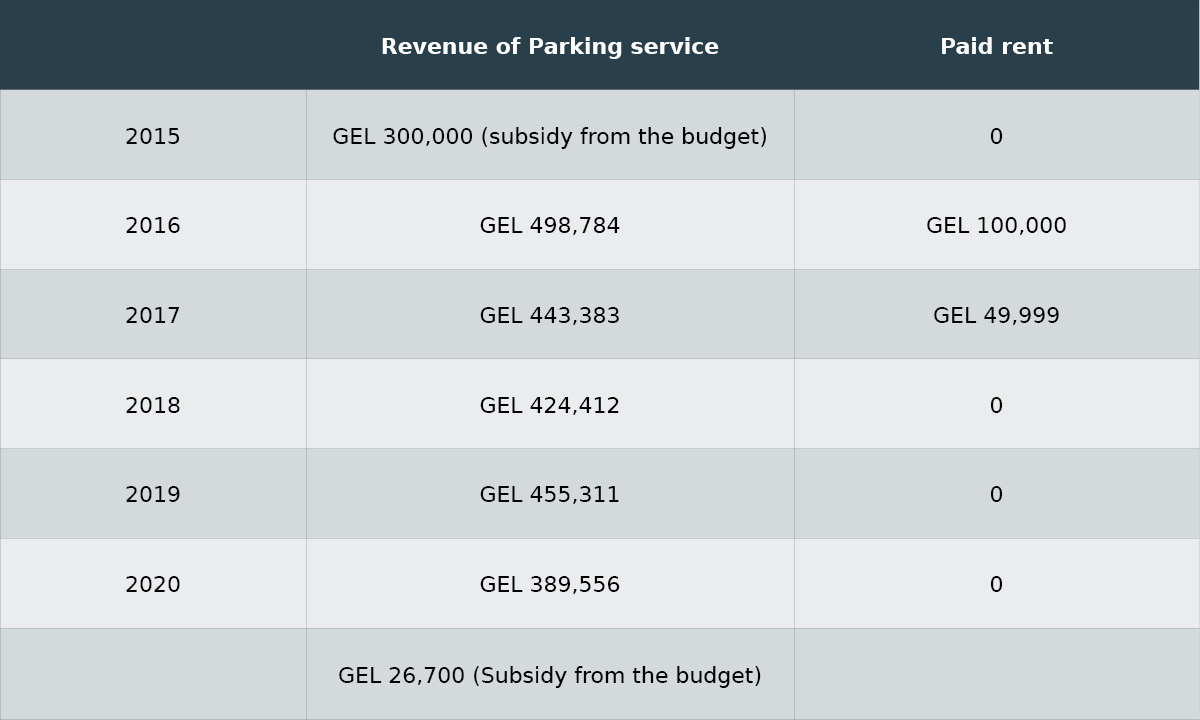 Analyzing the aforementioned data depicts that drivers in Kutaisi have to pay an average of GEL 252,800 on fines annually and GEL 453,000 is spent on the administration  of the process per year, that indicates an ineffective management.

Replacing the rent with usufruct

As the Parkings service was unable to pay the rent, Kutaisi City Hall decided to cancel the rent agreement and transferred the property under gratuitous usufruct.

Based on the Order of November 9, 2020 by the Mayor, the rent agreement between the city hall and Parking service was abolished and the accumulated debt was redistributed over the next 10 years. The debt was GEL 1,784,890, however, the city hall included only the debts accumulated until February 27, 2019 and exempted the company from the fines accrued since then, despite the fact that the agreement was abolished almost two years following this date.

According to the debt repayment schedule, Parking service had to make the first installment of GEL 50,000 in 2020, however, the company failed to do so. Moreover, the city hall allocated GEL 26,700 for the company as a subsidy that, according to them, was caused by the pandemic.

The steps taken by Kutaisi City Hall to solve the parking problems appeared to be ineffective, which indicates the wrong management by the city hall.