On October 31, 2018, when presenting his activity report, the Acting Mayor of Zugdidi, Maizer Nanava, stated that the municipality was planning to optimize legal entities. The optimization might result in changing the number of both municipal non-entrepreneurial (non-commercial) legal entities (N(N)LE) and limited liability companies (LLC) and individuals employed by them.

TI Georgia has published a number of studies about the remuneration of employees of municipal N(N)LEs and LLCs and about the non-transparent practice of employment in these organizations.

This time, we are presenting the statistics of employees of 9 N(N)LEs and 2 LLCs in the Zugdidi Municipality and an overview of the annual expenses incurred on them  as of October 2018.

Number of employees and remuneration

The total remuneration of employees of the City Hall and City Council of Zugdidi and of the N(N)LEs and LLCs this year has been more than GEL 19 million, which amounts to almost half (45%) of the budget of the Zugdidi Municipality of 2018 (GEL 42,082,600).

Among of the N(N)LEs, the Center for Management of Institutions of Pre-School Education has the most employees (679), 47 out of whom (including 3 deputy directors) are employed in the Center’s administration.

Ninety-one out of 459 employees of the Zugdidi Cleaning Center, including 28 team leaders and 30 controllers, are employed in the management, while 368 employees (drivers, workers, field workers, etc.) are employed on the basis of labor contracts.

The staff list of the Center for Management of Municipal Improvements (298 employees) is divided into two main categories: administrative staff (60 employees) and technical staff (238 employees).

One hundred thirty-six people are employed in the Center for Management of Sports Institutions, whose four divisions and administration (with a total of 30 employees) constitute the management of the N(N)LE, while the other six divisions, including the Division of Figure Skating and Hockey at the Ice Palace, are specializing in various types of sports. This division includes 11 positions. It should be noted that the construction of the Ice Palace has yet to be completed; accordingly, the classes of figure skating and hockey have not yet started.

The Arts and Culture Development Center employs 209 people; the organization employs the highest number of people (33) in the Division of Infrastructure and Logistics.

The Palace for Development of Pupils and Youth employs 149 people; 21 of them are non-staff employees, while 16 are employed in management. 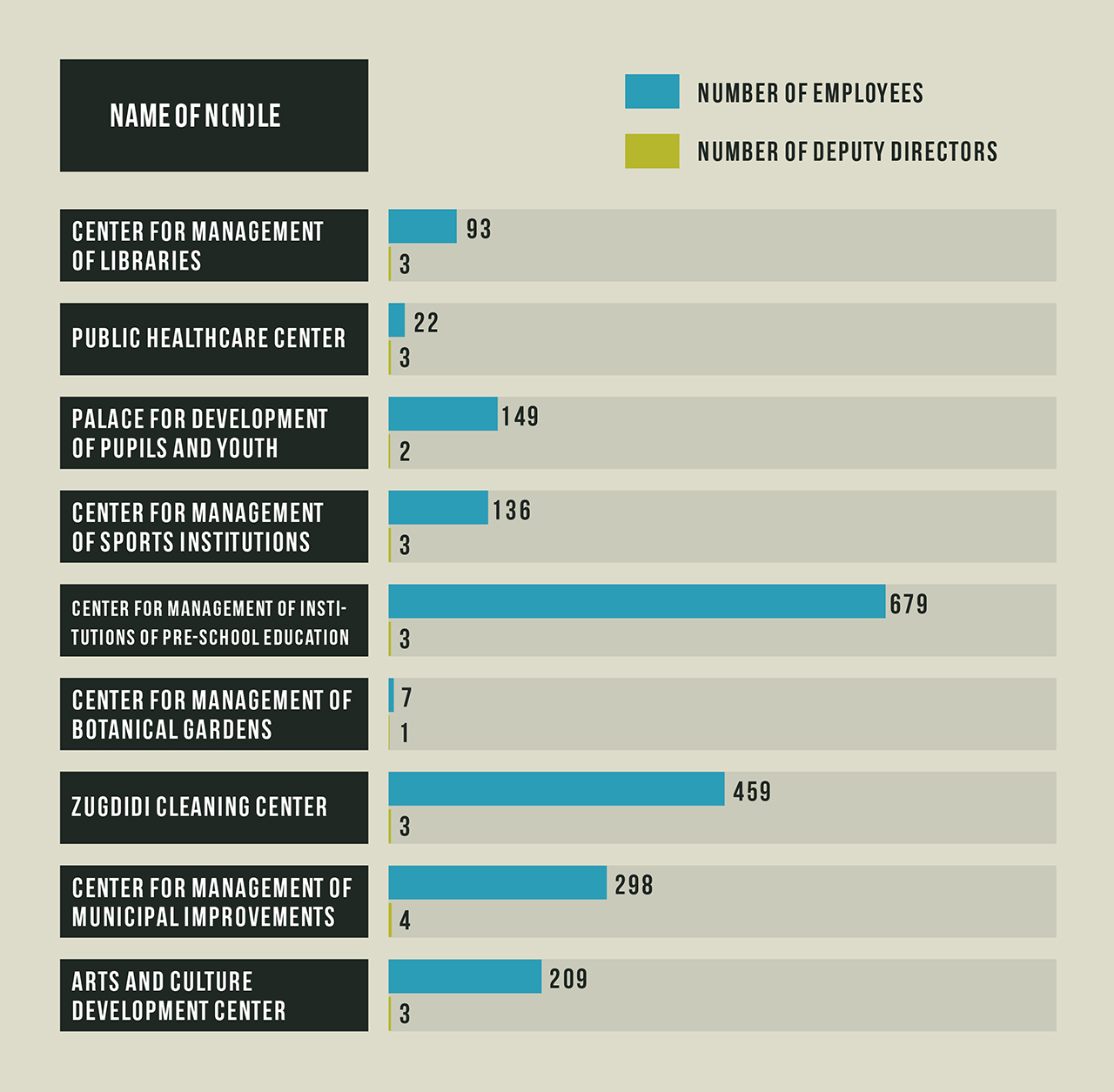 Unlike the procedure of appointment of public servants, employment in N(N)LEs does not require the announcement of a competition. Accordingly, both the City Hall – when appointing heads of N(N)LEs – and the heads of N(N)LEs practically make recruitment-related decisions unilaterally, which does not make it impossible to select specialists with higher qualifications for vacant positions in an environment of free competition. In addition, there are doubts about whether the qualifications of those who were employed without a competition, by unilateral decisions, correspond with their positions.

Spending GEL 14 million on municipal legal entities in unjustified in a situation when the municipality fails to resolve problems related to public transport, social issues, and other elementary problems.