Transparency International Georgia requested public information from Adjara municipalities and municipal Non-entrepreneurial (non-commercial) legal entities (N(N)LE) regarding the number of employees (permanent and contract-based) and their remuneration as of June 2020.

Our organization published a research in 2016, that summarized the data for 2014-2015. Moreover, in 2019, we published research on the legal entities of Batumi municipality. Therefore, we were able to compare the data from 2020 to those of the previous years. 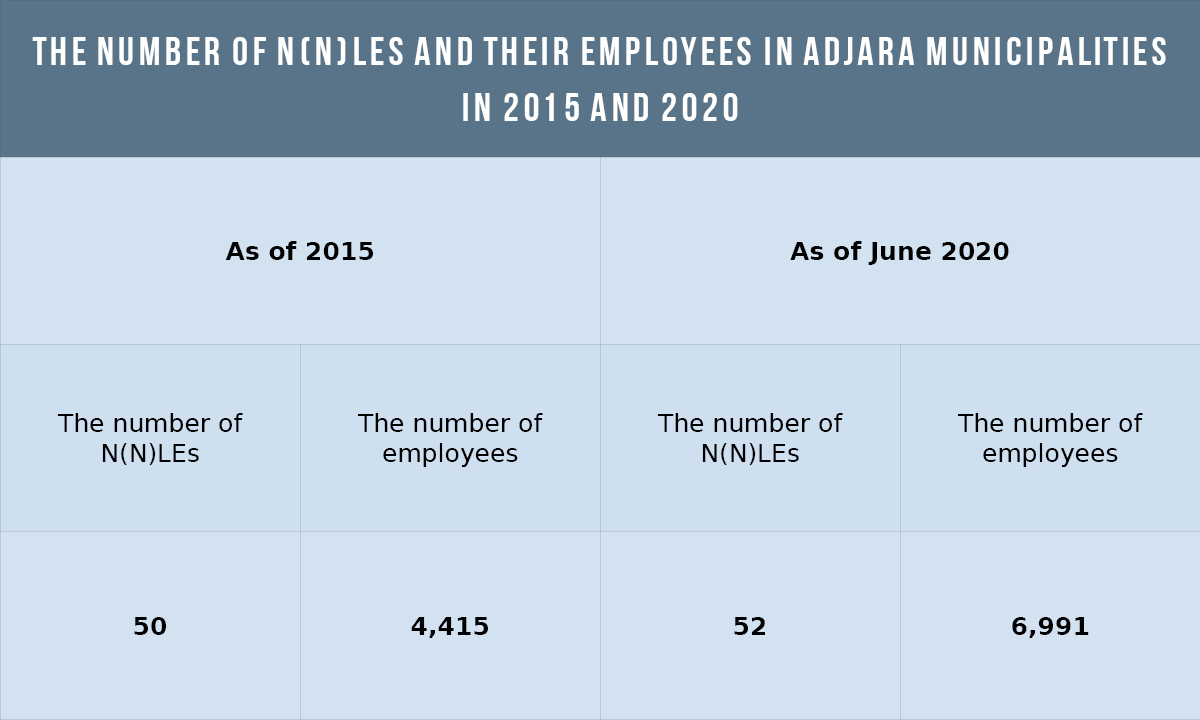 Questions arise regarding the appropriateness of having some of the N(N)LEs, as the municipalities are not able to substantiate the pressing need of their existence and the financial resources required for their functioning. We may consider N(N)LE Football Club “Khikhani”, located in Khulo Municipality, Chess Club “Nona” and “Horse Riding Club” in Batumi as such cases. We consider merging the last two legal entities with “Batumi Sports Centre” as an optimal decision. Besides, it is of crucial importance that Adjara municipalities conduct a comprehensive study on N(N)LEs, conduct monitoring, and maintain only those legal entities with specific tasks when the municipalities are not able to do these tasks with state procurement.

The study revealed that as of June 2020: 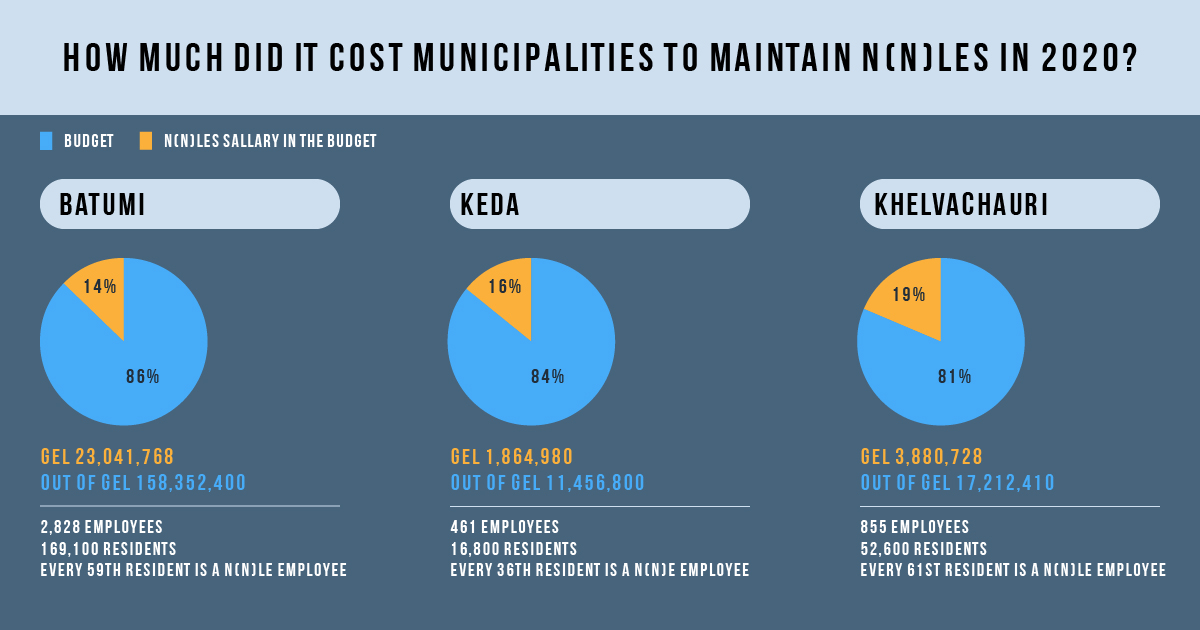 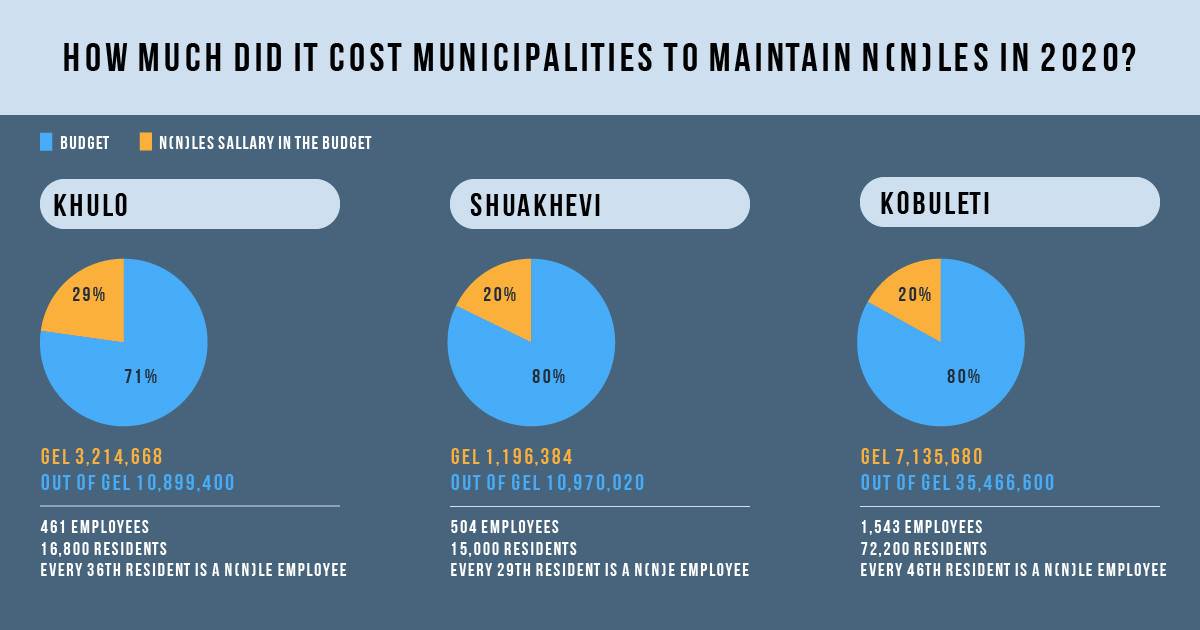 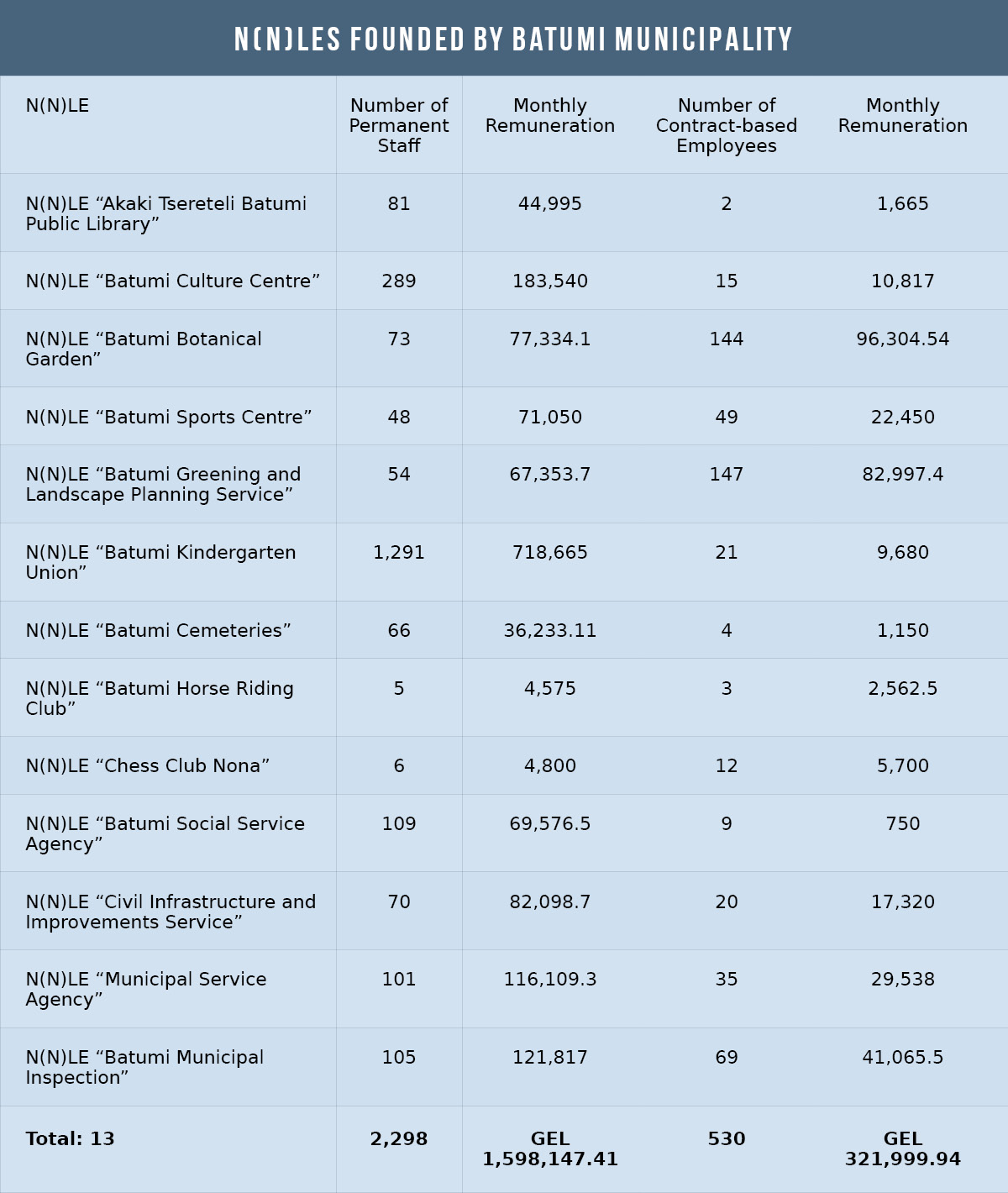 The number of permanent and contract-based staff of N(N)LE “Batumi Botanical Garden” is conspicuous. The director of the N(N)LE - Irakli Archaia briefed Transparency International Georgia on that matter. According to him, the current number of employees is essential for implementing the duties assigned to the botanical garden. The garden’s territory exceeds 110 hectares, existing flora “is allocated in nine phytogeographic compartments, three parks, and various collections”. Each collection and compartment require proper maintenance and the Gardening Department is responsible for this task (the largest department of the Botanical Garden). Hereby, we found out that N(N)LE “Batumi Botanical Garden” incorporates Batumi Zoo and Goderdzi Alpine Garden located in Khulo Municipality.

Transparency International Georgia was briefed by N(N)LE “Batumi Greening and Landscape Planning Service” regarding the job descriptions of employees along with the staff rankings and remuneration. They justify a large number of employees with the need for a “flawless operation of the organization”.

Despite the number of employees and the budget allocated for the remuneration of their employees, the Botanical Garden and the organization responsible for greening Batumi do not participate in the greening process of Batumi Boulevard. N(N)LE “Batumi Boulevard” spends hundreds of thousands of GEL per year on planting and maintaining seasonal flowers. While having such a volume of administrative costs, it is crucial that the resources of both legal entities are used efficiently. Batumi Boulevard should be supplied with plants from the resources of the aforementioned N(N)LEs.

N(N)LE “Batumi Culture Centre” employs 289 permanent staff. Our organization requested the staff listing and a letter of explanation from the mentioned N(N)LE. According to the response received, the center has 9 designated creative units. According to the director of the center, this number of employees is essential for carrying out procurements related to cultural events, office maintenance, utilities, entertainment services, and for the remuneration of the administrative personnel.

In the research published in 2019, Transparency International Georgia noted that “Batumi Culture Centre” spends the largest amount of financial resources on cultural events and the largest portion of these expenses are made through direct procurements. This practice creates additional risks of corruption. For the municipal expenditures to be efficient and optimized, it is necessary that all such events organized by the city are held utilizing the resources of municipal N(N)LEs. Tenders should be announced/direct procurements should be granted to companies/legal entities solely when there is an urgent necessity. Announcing procurements by the N(N)LE is unclear, as it spends almost GEL 200,000 on remuneration for 289 employees per month. 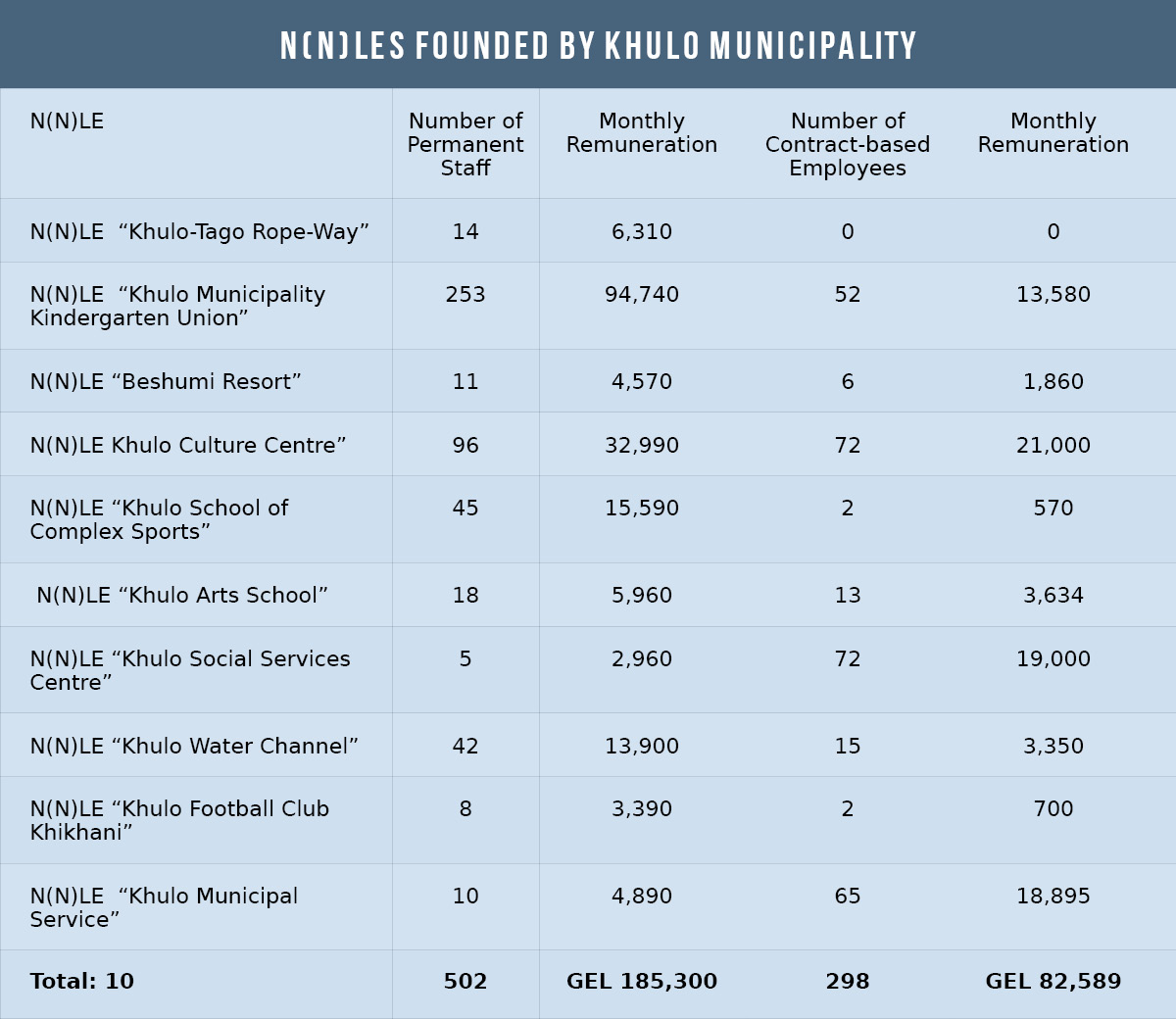 N(N)LE “Khulo Culture Center” employs 168 people. The director of the centre explains this number with “urgent necessity”. According to the information received,  the administration and the creative department of the N(N)LE have 10-10 employees, whereas the library has 12, three museums and one art gallery - 35, seven culture centers - 30 and ten village clubs have 11 people employed as permanent staff. Regarding the contract-based employees, the members and the additional specialists are employed with contracts in 9 ensembles of Khulo Culture Centre.

A similar question arose regarding the N(N)LE “Khulo Social Services Centre”. According to the information received, we determined that a significantly large number of contract-based employees is conditioned by the fact that the center employs 11 drivers, 47 nurses, a single office assistant, a procurement specialist, and a special assistant. However, the director of the center could not explain the necessity of having a large number of contract-based employees over the phone call, nor did he send us a requested written explanation.

It is noteworthy that N(N)LE  “Khulo Football Club “Khikhani” has 10 employees. According to the data received, 4 out of 8 permanent staff are coaches, while 1 out of 2 contract-based employees is a coach and the other one - an assistant of a coach. During the conversation with the director of the N(N)LE, we found out that football players receive remuneration through donations. This fact also raises questions.

There are 8 N(N)LEs in Shuakhevi Municipality with 504 employees in total, out of which 481 are the permanent staff, while 23 are contract-based. It is worth mentioning that Shuakhevi municipality did not provide us with detailed data regarding the remuneration of the permanent staff and contract-based employees separately. Therefore, the monthly remuneration of 504 employees amounts to GEL 183,032 in total. 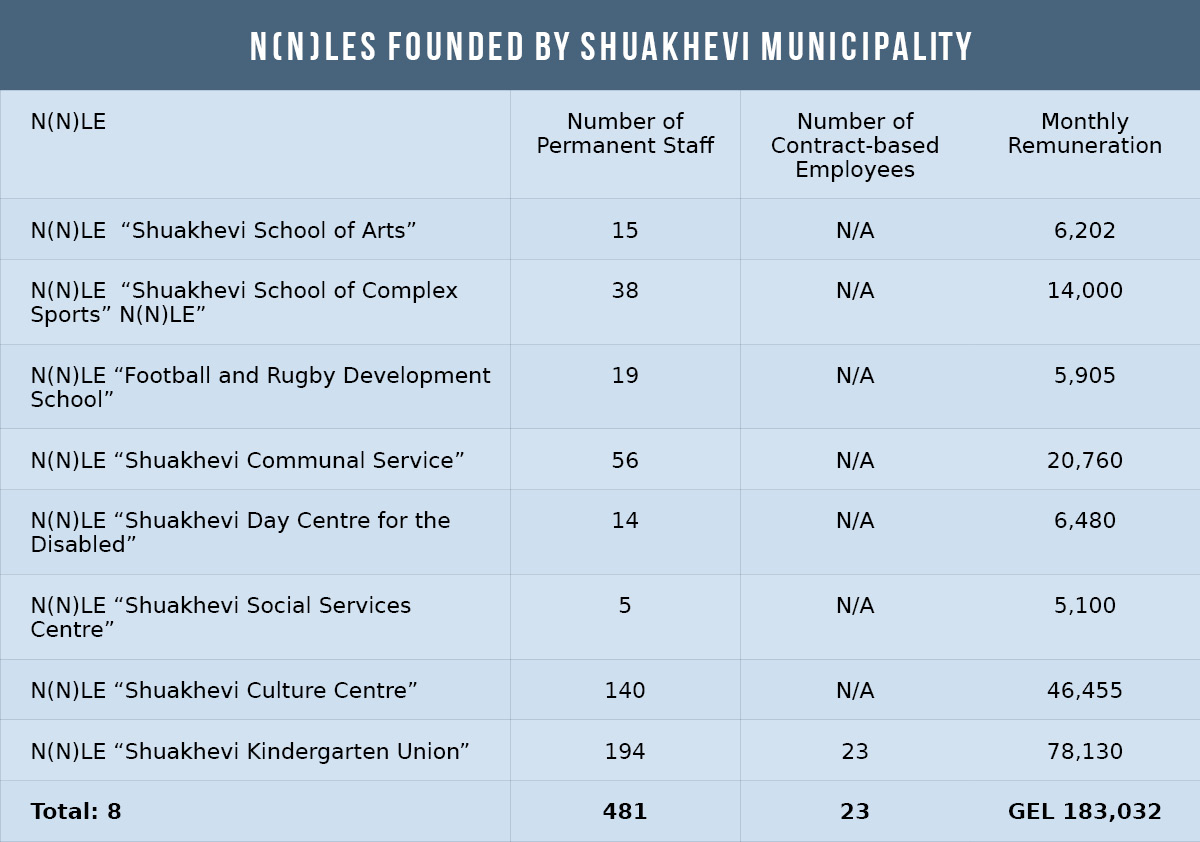 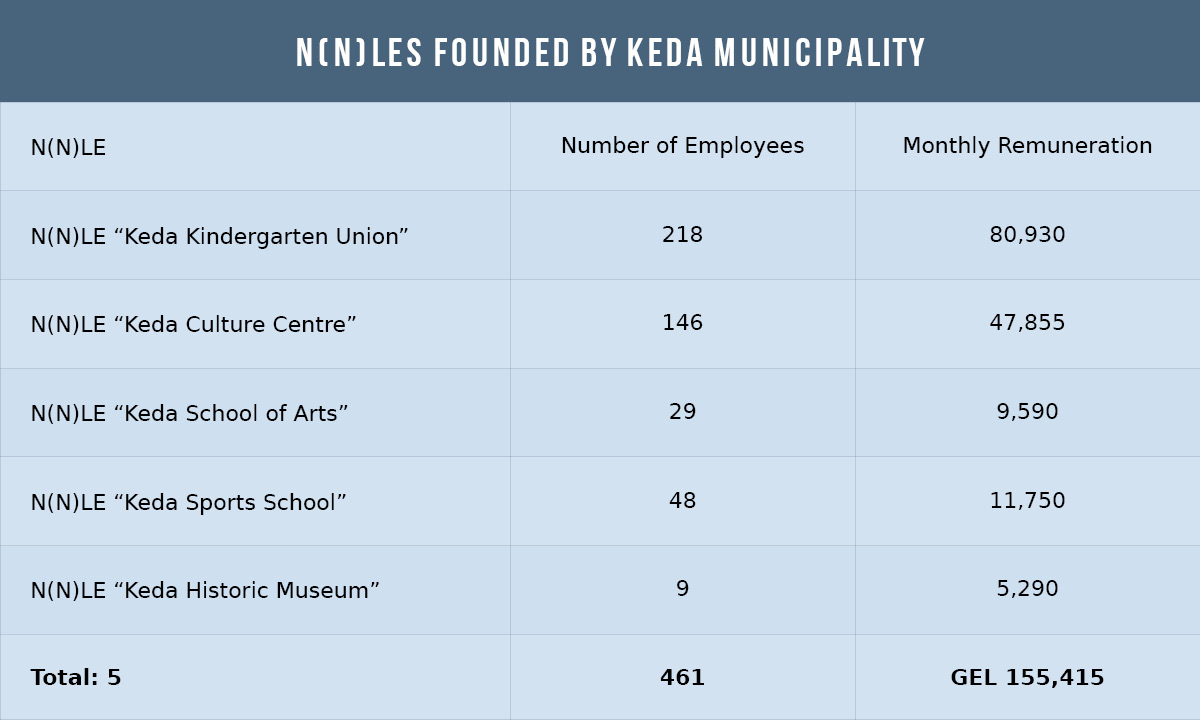 There are 5 active N(N)LEs in Khelvachauri Municipality that has 855 employees in total, out of which 711 are permanent staff, while 144 are contract-based. The remuneration of employees of Khelvachauri Municipality N(N)LEs amounts to GEL 343,394, out of which GEL 272,344 is spent on permanent staff remuneration while GEL 51,050 - for the contract-based employees. 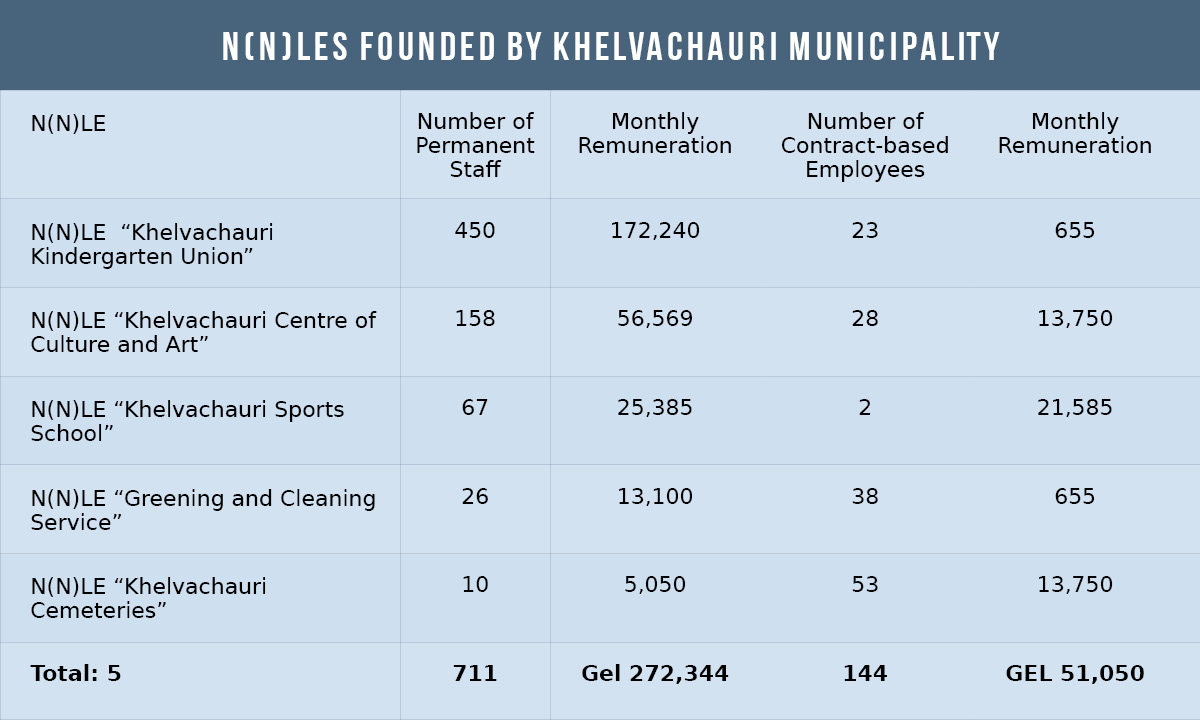 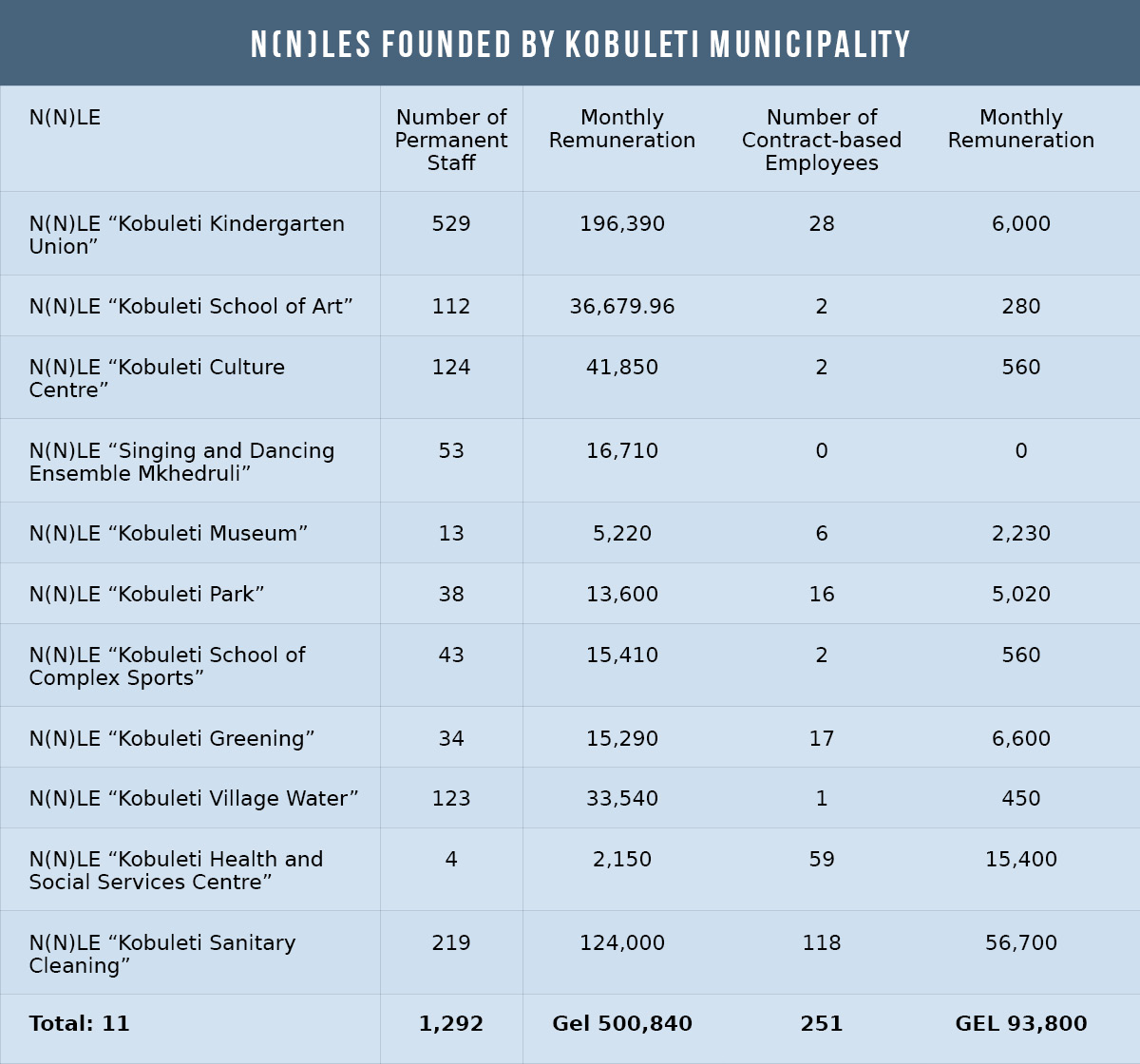 The table shows that the N(N)LE  “Kobuleti Healthcare and Social Services Centre” has 63 employees in total. This was explained in detail by the director of the N(N)LE. In particular, the center that was initially created for the effective management of the municipal programs for healthcare and social services has 13 contract-based drivers and 46 contract-based nurses. According to the information received, 13 emergency centers of the municipality have SUVs in service for better service delivery. Consequently, this explains the number of drivers employed in the center.

Regarding the N(N)LE “Kobuleti Museum”, the document depicts the staff listing and their job descriptions. However, the letter of explanation on the need for employing these people was not attached to the document.

Unlike the procedure for appointment of public servants, employment in N(N)LEs does not require the announcement of the competition. Accordingly, both the Mayor– when appointing heads of N(N)LEs – and the heads of N(N)LEs, practically make recruitment-related decisions unilaterally, which does not make it possible to choose the specialists with higher qualifications for vacant positions in an environment of free competition.

Spending GEL 41 million on the maintenance of the legal entities can not be justified in conditions when the problems related to public transport, social issues, and other municipal problems remain unsolved.

According to Transparency International Georgia, Adjara Municipalities should take the following steps in the short term:

[1] As Keda and Shuakhevi Municipalities did not provide us with the separated data for permanent and contract-based staff, we were unable to process statistics for those municipalities