TI Georgia has taken an interest in the number of factions functioning in the municipal councils of the Samegrelo-Zemo Svaneti region (elected in 2017), the issues they initiated from the time they were set up to November 1, 2018, and the amounts of money spent on the factions from the local budgets.

During the period studied, the municipal councils spent a total of GEL 1,543,736 on the salaries of members of factions.

Out of 54 factions in total, only 3 factions of the City Council of Zugdidi (the Georgian Dream – Democratic Georgia, the Conservatives, and the United National Movement) had initiatives.

In addition, most of the issues initiated by the United National Movement faction of the City Council of Zugdidi were motions regarding the provision of social assistance to concrete citizens. As Ana Tsitlidze, the chairperson of the faction, stated in a conversation with us, the majority of the motions were not granted, because, according to the position of the municipal body, a part of the citizens didn’t meet the corresponding criteria.

As for the initiatives of the factions of the Georgian Dream – Democratic Georgia and the Conservatives at City Council of Zugdidi, the City Council adopted the draft legal acts proposed by them.

As the municipal councils of Mestia, Tsalenjikha, and Khoni didn’t provide us with information on the cost of fuel, these data are not fully included in the present study. But in total, the factions consumed 55,149 liters of fuel, whose total cost amounted to GEL 89,913. 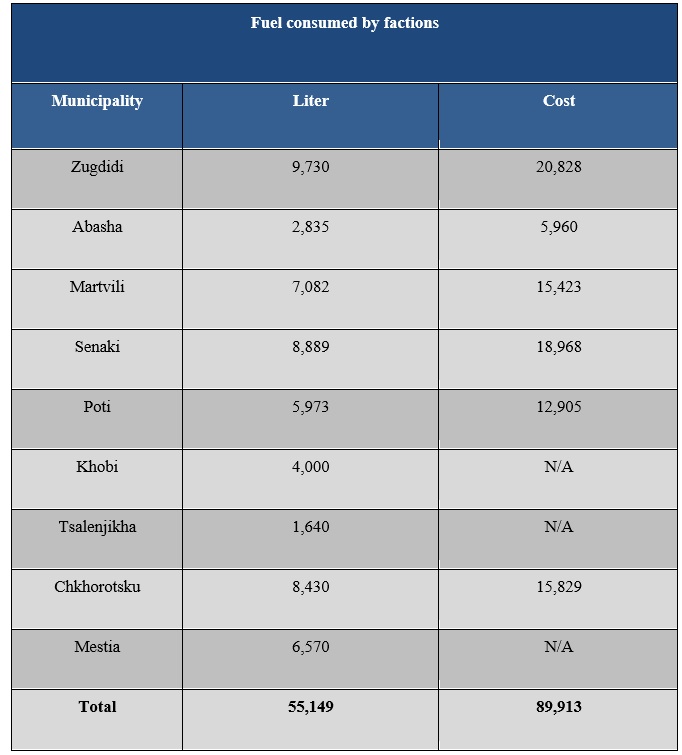 During the period studied, the factions of the municipal councils of the Samegrelo-Zemo Svaneti region spent GEL 20,443 on telephone communication and GEL 7,837 on business trip expenses. 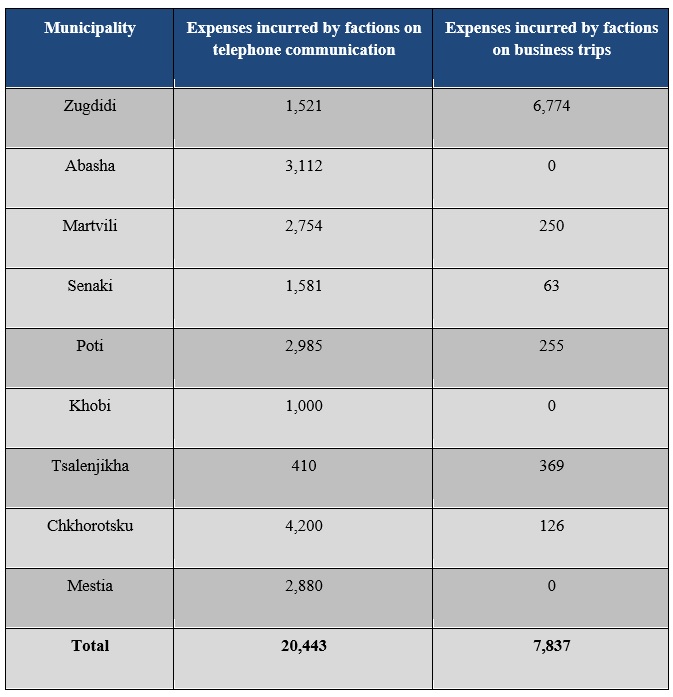 The applicable legislation does not provide for any upper limits on the number of factions of municipal councils or any particular rules of their operation. The procedures of creating a faction, as well as its powers and rules of operation, are determined by the statute of the faction, which, in most cases, is a general document and does not impose any types of particular obligations on the chairperson or members of the faction.

Municipalities make use of the general stipulations in the legislation. All the municipal councils have created the maximum number of factions, and the expenses to be incurred on their activity constitute a considerable burden on the budgets. It should be noted that from December 2017, a new position – the deputy chairperson of the faction – was introduced, which further increased the burden of salaries. As confirmed by our study, the expectation indicated in the explanatory note to the said legislative amendments that the new position would increase the effectiveness of the activity of factions has not come true.

It is important that the activity of a faction be beneficial for the relevant self-government body and that it be oriented at increasing the availability and quality of municipal services. Factions are an important component for increasing the degree of citizens’ involvement in self-government, for supporting local initiatives, and for advocating citizens’ needs and problems. Therefore, we call on the factions to make an active use of the said instruments.