Disparate and flawed practices in subcontracting companies remain one of the most serious problems within the public procurement system. The issue of subcontracting is not regulated under the effective legislation, which increases the risks of corruption in the public procurement system and encourages harmful practices in managing public finances. Approaches adopted by procuring organizations of the government of the Autonomous Republic of Adjara as well as the regional municipalities are not an exception to the rule.

For years, Transparency International Georgia has been emphasizing the need to eliminate the above-mentioned shortcomings: in the process of association with the European Union, Georgia committed itself to bring the public procurement system in line with the EU directives. The process of such harmonization is to be carried out in four phases and be accomplished in 2022; however, the rule of subcontracting was to be introduced in 2019. In particular, that rule would entitle central, municipal and other budget organizations to require that main suppliers provide information about volumes of work to be performed by subcontractors, financial sustainability of subcontractors and in the absence of such sustainability, the ability of main suppliers to replace them.

Transparency International Georgia studied public procurement contracts with a value exceeding GEL 100,000, that were awarded in 2020-2021 by 14 budget entities operating in Adjara. They include contracts awarded by four ministries of the region’s government, five municipalities, two subordinated units (Adjara Roads Department of Adjara Tourism and Resorts Department), a legal entity in the public law of the Finance and Economy Ministry of Adjara (Batumi Boulevard), a limited liability company of the Autonomous Republic of Adjara (Adjara Project Management Company) and a large municipal non-entrepreneurial (non-commercial) legal entity (Batumi Civil Infrastructure and Amenity Department).

The study revealed a disparity in approaches. This disparity broadens the possibilities of misspending public finances.

It is commendable that almost all entities require that suppliers of goods/services under tenders agree on the issue of subcontracting companies with the procuring entities.

None of the public entities uploaded agreements concluded by suppliers with subcontractors to the webpage of the State Procurement Agency. Although the legislation does not require that, it is an important factor for ensuring transparency of the process.

Public entities adopt different approaches to set an upper limit of works to be performed by subcontractors:

Winners in tenders announced by (N)LE Civil Infrastructure and Amenity Department, that subcontracted the works 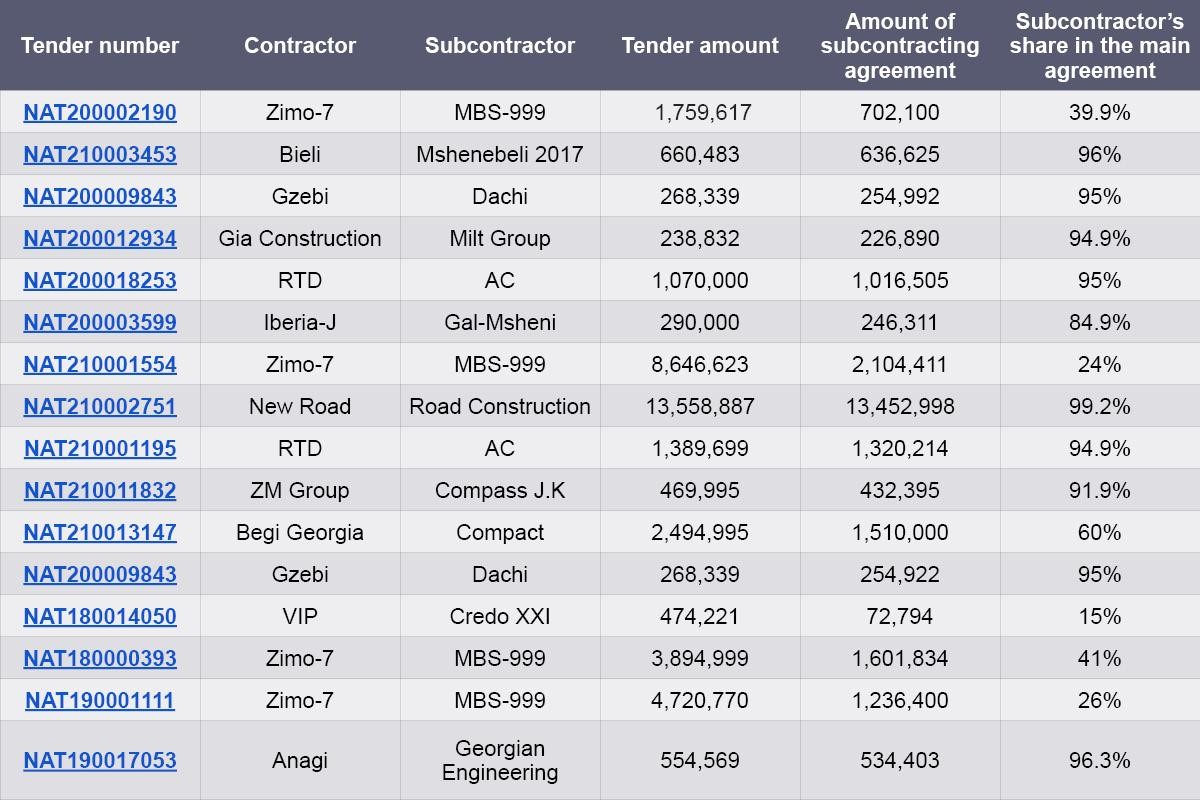 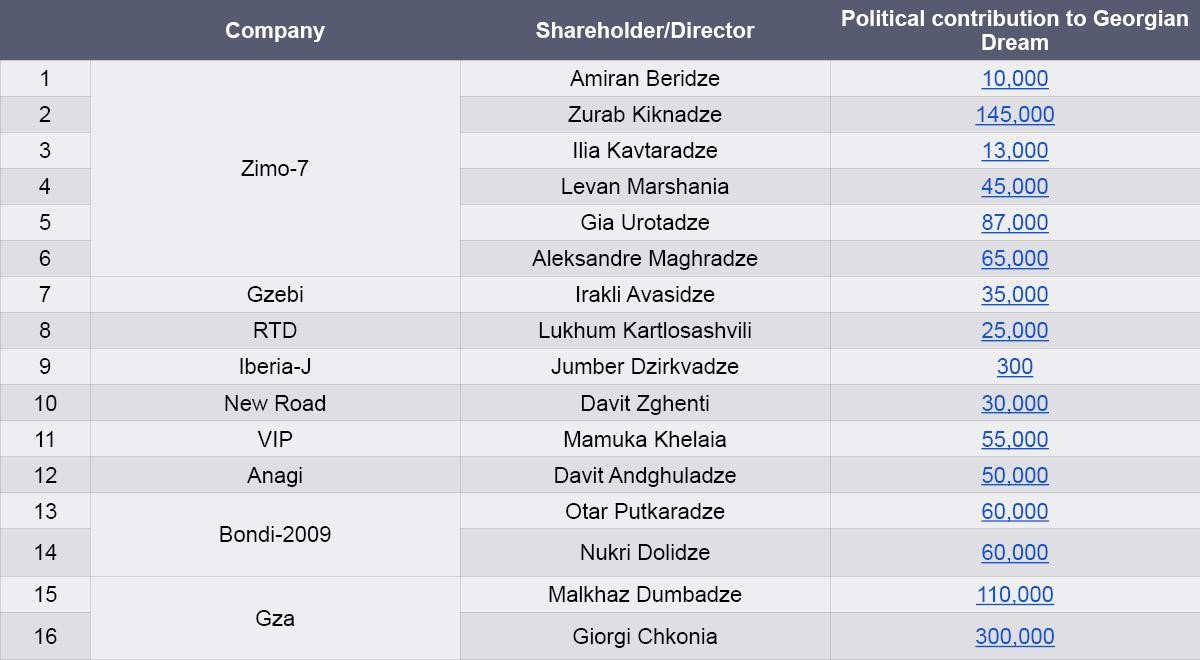 Procuring public entities do not scrutinize whether the companies participate in tenders in good faith.

The study conducted by TI Georgia in the Adjara region has revealed that the practice adopted by public procuring entities in relation to subcontractors is disparate, harmful and riddled with risks of corruption.

Procuring organizations operating in Adjara mainly follow their own initiatives and ways of doing things, which need to be urgently regulated and a uniform standard established. The same need can be seen in the State Audit Office report of the current year on the results of the study into public procurements of ministries of the Autonomous Republic of Georgia.

It is difficult to understand why the ministries and municipalities do not inquire about agreements concluded with subcontractors, when these entities announce public procurements for expensive projects and given the volume of works, suppliers do objectively need to subcontract other companies. We might be dealing here with an improper approach to issues related to subcontracting. The mechanisms of inquiry and oversight must be applied effectively by the Supreme Council of Adjara to the regional government and by local city councils to the municipal units.

Of particular interest is the practice adopted in the Batumi Civil Infrastructure and Amenity Department, whereby winners in tenders, which mainly comprise the companies that make contributions to the Georgian Dream, actually perform the role of intermediary between procuring entities and subcontractors.

It is not clear why the works that are actually carried out by subcontractors should be regarded as the experience of, and fulfilment of tender terms by, a company which is the main supplier according to the contract, but, in reality, acts as an intermediary and gets between 10% and 15% of the total tender amount for that intermediation, according to official documents.