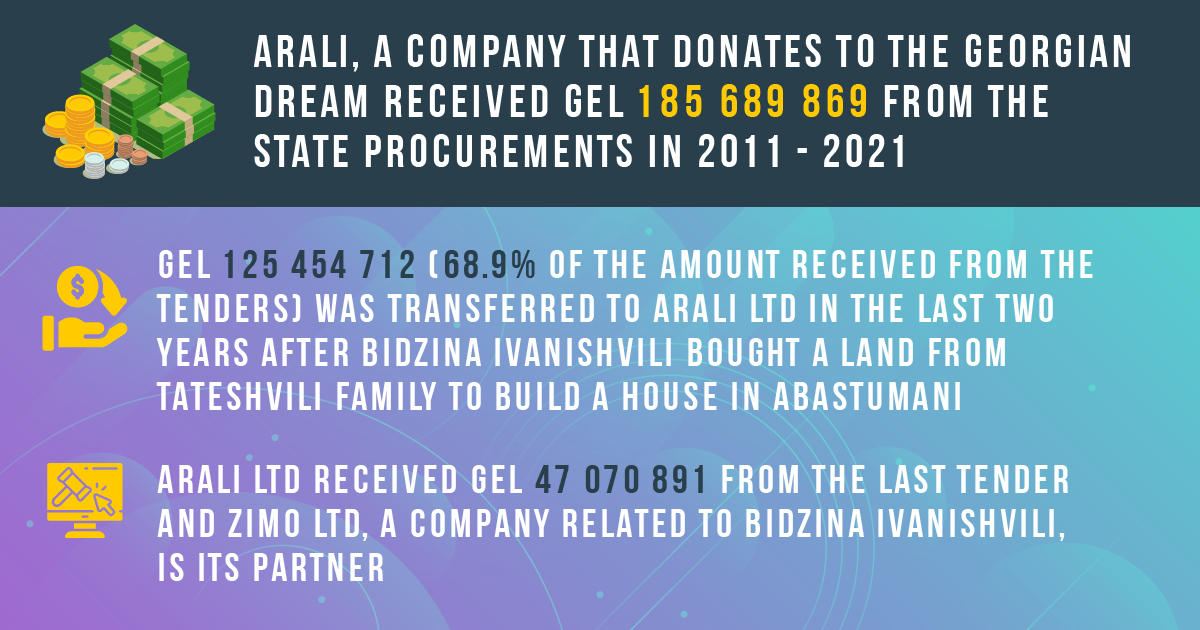 Arali LTD received GEL 47,070,891 from the latest state procurement. This tender was announced by the Municipal Development Fund of Georgia for the rehabilitation of the Otskhe riverbed, bridges, main and local roads in Abastumani. "Arali" will carry out the works together with Zimo LTD, which is related to Bidzina Ivanishvili.

The amount transferred from the budget to Arali LTD has increased by tens of millions of GEL since August 2018, when the owner of the company, Otar Tateshvili, sold 450 sq.m. of land to Bidzina Ivanishvili to build his house in Abastumani. If in previous 7 years he had received a total of GEL 51,585,275 from the tenders, in the next two and a half years he was awarded[1] with tenders worth of GEL 125,454,712 (68,9% of the total revenue received from the tenders). Otar Tateshvili’s son - Demetre Tateshvili registered two pieces of land, 3 883 sq.m. in total in Abastumani, that is partially covered with forest and which was purchased at the auction without competition exactly in 10 days after this deal. Later, in August 2020, Demetre Tateshvili returned both pieces of land back to the state. In return, under the mutual transfer agreement of the property, he received 4 660 sq.m. of land that borders Borjom-Kharagauli National Park and lies close to Bidzina Ivanishvili’s hotel Paragraph Marriott that is under construction.

Since summer 2018, following the purchase of Tateshvilis’ land in Abastumani by Bidzina Ivanishvili, Arali LTD became actively involved in carrying out the projects funded by Cartu Fund in Abastumani. It constructed Abastumani Lung Center and a living block for locals. Also, Arali LTD was actively involved in preparatory works for the construction of Bidzina Ivanishvili’s hotels on Zekari and Tsisartkela sanatoriums.

Demetre Tateshvili and his family members own the shares in 12 companies. 7 of those were founded during the rule of the Georgian Dream government. 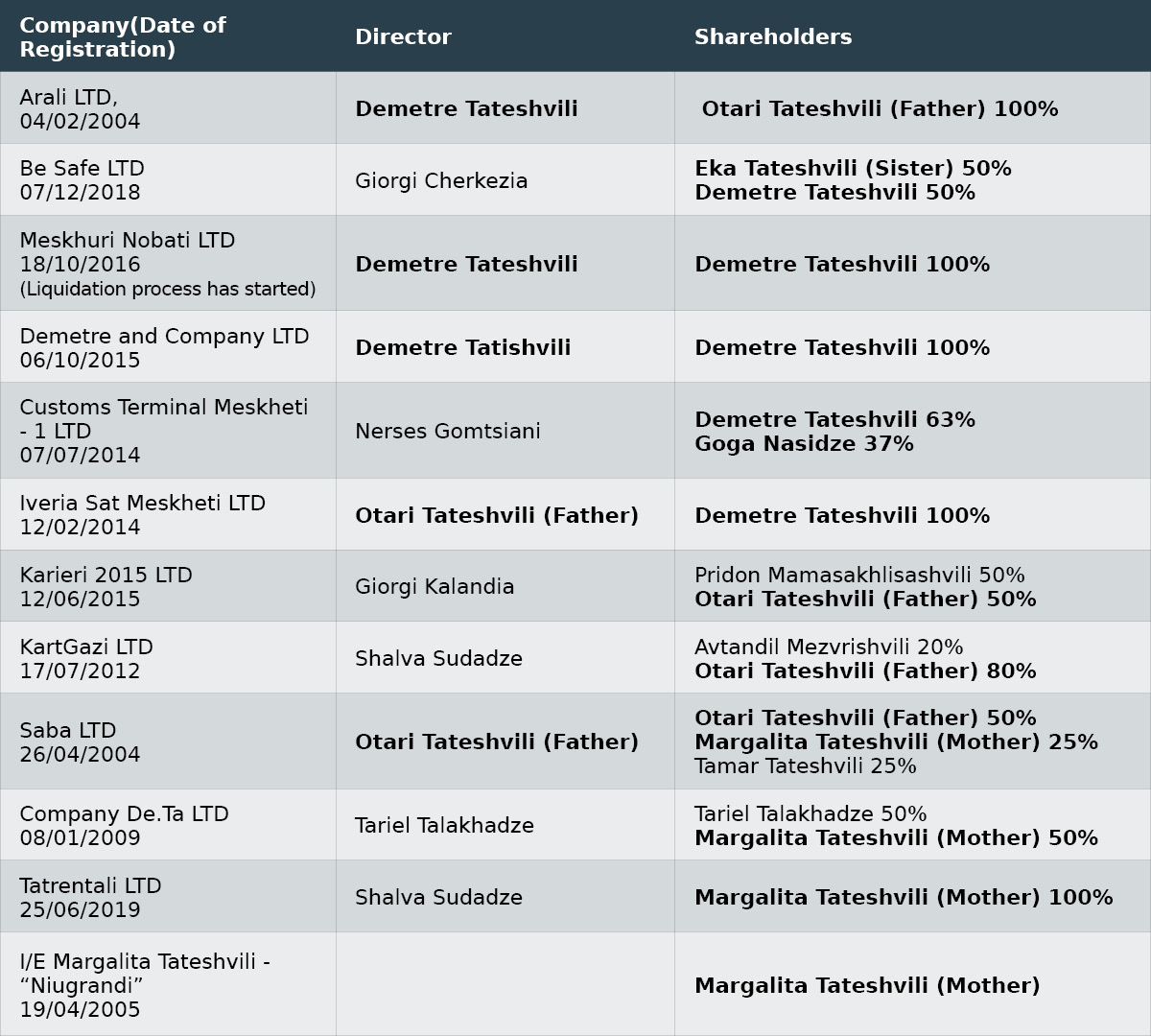 It is only Arali LTD of the Tateshvilis’ companies that participates in the state procurements. The company received a total of GEL 185,679,869 from the state budget from 2011 to March 2021.

The previous director and the owner of the company - Otar Tateshvili was arrested in October 2017 with charges of misappropriation of GEL 130,000 from the tender won without competition. The case concerned a tender worth GEL 1,927,600 that was announced in Akhaltsikhe municipality. Tateshvili was convicted a month after his arrest and a plea agreement was signed with him, however, the company of a businessman convicted for corruption was still receiving tenders worth millions from the state budget. He won the tender announced by the Roads Department of Georgia three weeks after the arrest and was awarded with a contract worth GEL 3,099,328. GEL 199,900 was transferred to him for the tender won from the Roads Department in a month after sentencing as well.

The Roads Department of Georgia and the local municipalities are the main purchasers of services from Arali LTD. The company carried out the construction works mainly in Samtskhe-Javakheti, however, its area of operations was increased during the last three years. For example, the company won two tenders worth approximately a million GEL in Mtskheta municipality in 2019. Its competitors were disqualified in both cases. During one of the tenders two competitors of Arali LTD were disqualified, however Mtskheta municipality made the changes in the tender contract and increased the construction costs for Arali LTD by GEL 47,000. At the end of the day, Tateshvili’s company was given more money than the disqualified companies offered to the purchaser. 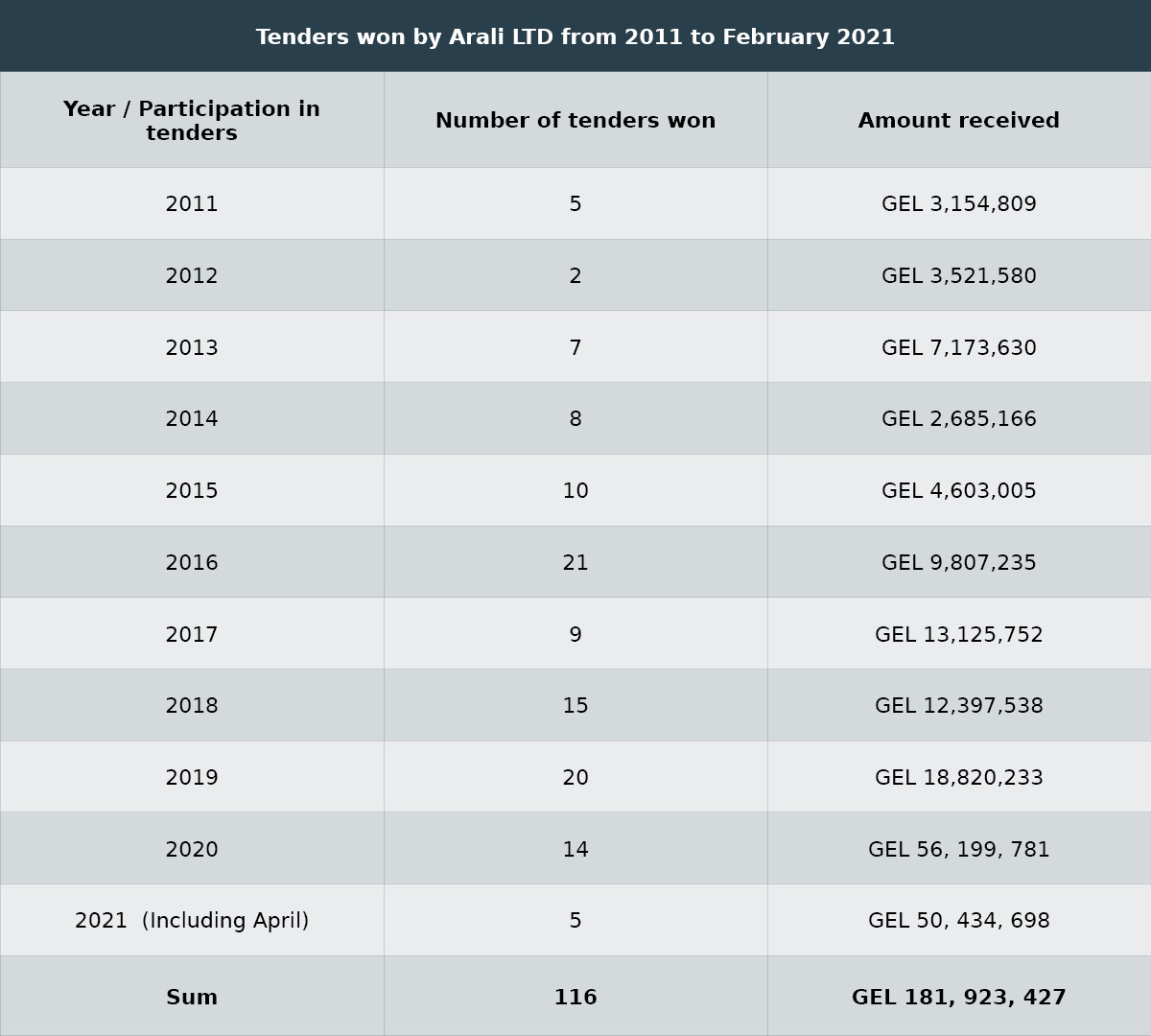 It is noteworthy that the media frequently reports about the poor quality of works carried out by Arali LTD. The roads paved by the company were damaged soon after completion in the villages of Ivlita, Chvinta and Bavra. It is also important that the purchasers often prolong the deadlines of works for the Tateshvili’s company, specifically, it happened in 22 out of 116 cases.

Arali LTD donates to the Georgian Dream party. The company donated GEL 40,000 to the ruling party in August 2017. Hereby, Otar Tateshvili donated GEL 60,000 to the National Movement in July 2012.

Transparency International Georgia calls upon the Anti-Corruption Agency of the State Security Service of Georgia to study the state procurements of Arali LTD and find out whether there were any alleged corruption deals between the company and the procuring entities.

[1] Otar Tateshvili passed away in November last year. We already had the research on Arali LTD prepared by that time, however, we didn’t publish it for that reason. According to the Public Registry, he still owns 100% shares of the company, while his son - Demetre Tateshvili is a director and share manager.