Allowing 21-year olds to run for Parliament – what do you think? - საერთაშორისო გამჭვირვალობა - საქართველო

Allowing 21-year olds to run for Parliament – what do you think? 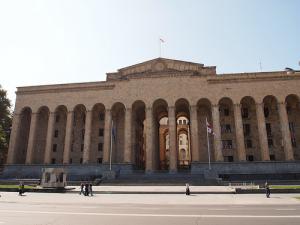 An initiative of the ruling United National Movement party aims at revising the Constitution of Georgia, lowering the age at which one can stand for a parliamentary seat from 25 to 21 years. The public discussion period for draft amendments has concluded, and a discussion on the results of these meetings took place in Parliament today, May 7, where it was recommended that the initiative enter the standard legislative process. We asked members of Parliament and representatives of student groups for their opinions on the amendment, and we want to hear your thoughts too. After reading the arguments for and against the amendment, be sure to take our Facebook poll or leave a comment below.

According to the draft law’s explanatory note, the purpose of the initiative is to encourage engagement of younger people in the political process and support the principle of equality in law-making:

“Effectiveness of the work and high level of representativeness of Parliament, as a supreme law-making body is largely depended on the composition of Parliament, to what extent do professional citizens of any generation and proper preparation and education have an equal opportunity to participate in its activities.

According to Article 49 of Constitution of Georgia, a person who is 25 years old or more can be elected as a Member of Parliament. At the current stage of democracy-building and legal reforms, it is reasonable to re-examine the above-mentioned limitation in order to allow young people to have an opportunity to engage in the supervision of rapidly changing political and economic processes who, in case of public trust, will be elected in the highest law-making body and participate in the democratic development of the country.”

The explanatory note elaborates that minimum age to qualify for an office of MP in many other democratic states is as low as 21 or 18, and lists largely European Union member countries. Further research by TI Georgia turned up some examples of young elected legislators in the EU. The youngest member of the European Parliament, for example, is Amelia Andersdotter, representing the Swedish Pirate Party, who assumed office at the age of 24; Simon Harris, currently the youngest deputy of the lower house of Irish Parliament, was also 24 when elected through direct vote; Florian Bernschneider was 22 when elected to the German Bundestag.

However, Unity for Justice Parliamentary Faction Chair Dimitri Lortkipanidze is skeptical about the latter motive as he explained to TI Georgia that “referring to countries of the European Union is not a convincing enough argument because the quality of democracy in our country is considerably lower than in those countries.” Instead, Lortkipanidze suggested that “the given legislative initiative serves narrow electoral goals, in other words, this is an attempt of the ruling party to find support among our younger citizens who have studied abroad.”

Giorgi Kandelaki, United National Movement MP doesn’t think that the incumbent government will be the exclusive beneficiary of the proposed initiative, as “all parties have youth organizations and they can use this [change] as a tool for attracting new active members.” Besides, Giorgi Kandelaki doesn’t believe this specific initiative would affect the age structure of the Parliament significantly, as in case of younger candidates “it will take exceptional and most active ones to be elected,” therefore, they will not be many.

Nevertheless, Dimitri Lortkipanidze has voiced doubts about the competence of the mentioned age group: “it is noteworthy that at the age of 21, an individual cannot have attained full education, nor enough work experience. These persons will likely become victims of the current system, as decisions will be dictated to them.”

Ani Chankotadze, member of Laboratory 1918, a Tbilisi State University student group, also expressed concern regarding the political implication of the proposed amendment and thinks that “the amendment is motivated by something else rather than meeting a standard. It is possible that the ruling party has certain people in mind. These might be active individuals who they don’t want to lose and are now trying to mobilize resources for that purpose.”

Dimitri Gegenava, who is a Secretary General of the European Law Students Association (ELSA) Georgia, told TI Georgia that “legally, it is not unreasonable to lower the age of candidacy for Parliament,” especially because “this is a process characteristic to new democracies that has already taken place in Eastern Europe.” Another point is that Member of Parliament is an elected political position and does not formally require education or work experience which ELSA Georgia’s Secretary General thinks is fair, as Parliament represents various parts of society, including from non-academic spheres, such as agriculture, sports, etc. and “it might even be discriminatory if such requirements are imposed.”

Laboratory 1918 member Ani Chankotadze also thinks that “as itself, it is not a tragedy to give an opportunity to a 21-year old to run for a seat in Parliament, especially because there are some young people out there who have a lot of potential. However, it would not be justified if this happens to a massive degree.” In this regards, Dimitri Gegenava suggests that the amendment will rather formally increase the eligible pool for the office of Parliament.

A commission was created in Parliament on March 30, 2012 to hold public discussions on the draft constitutional amendments during one month (you can find the list of commission members attached). Total of five meetings were held in several regional cities of Georgia with the help of National Democratic Institute (NDI): Rustavi, Telavi, Batumi, Zugdidi and Akhaltsikhe. The commission reported on the results of these discussions today, May 7 and decided that the regular procedure will start in Parliament to amend the Constitution.

In the meantime, we’d like to find out what the internet community thinks about the issue. Please take a minute to respond to our Facebook polland express your opinion.